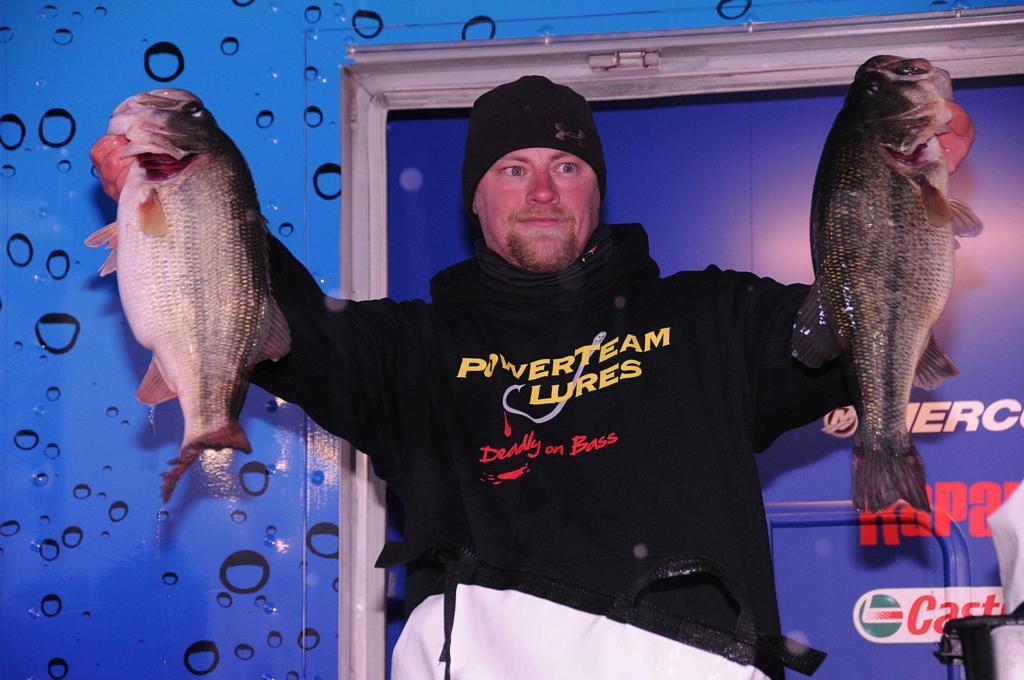 Despite the falling snow at weigh-in, James McMullen of Quakertown, Penn., turned up the heat on his competition with these two bass to win the EverStart Series event with a three-day total of 86 pounds, 7 ounces. Photo by Rob Newell. Angler: James McMullen.
Pennsylvania pro bests Guntersville favorites at the wire
March 2, 2013 • Rob Newell • Toyota Series

GUNTERSVILLE, Ala. – James McMullen of Quakertown, Penn., had never fished Lake Guntersville before in his life. It had always been his dream to come to the Tennessee River’s most famous fishery, Alabama’s crown jewel of big bass, and fish a tournament…or maybe two.

So about eight days ago, McMullen hit the road and traveled from wintery Pennsylvania to wintery Guntersville, Ala., for an extended fishing vacation which would include two tournaments: the BFL on February 23 and the EverStart event this week.

McMullen finished 18th in the BFL, not a bad start for never seeing the lake before. But this week, he found himself in the lion’s den of locals – true Lake Guntersville sticks who take out-of-towner’s money like his for a living.

On the day-one printout of the EverStart results, his PA home-state designation stuck out like a golf ball in tacklebox. His 28-pound, 4-ounce catch had him in the top five, sandwiched between several G-ville icons from TN and AL.

On day two McMullen sacked another 28 pounds, 13 ounces. And after weighing in the two biggest five-bass limits of his life, he still found himself in second place, trapped in a triad of Guntersville’s guns including Chad Aaron, Alex Davis and Justin Lucas.

By the morning of day three, McMullen felt as if he was living in some kind of twighlight zone. For one, he had left Pennsylvania to get away from the miserable cold weather, only to fish in 37-degree weather on Guntersville for two days. And now he was blasting off in a snow flurry in Alabama. 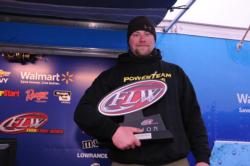 Secondly, he had just fished the two most flawless days of his life, beyond his own expectations, bagging the biggest limits of his life.

Thirdly, despite his surreal catches, he was still being beat and a group of Guntersville sharks were now circling around him, waiting for him to falter.

But McMullen had one goal when competition started this morning: to catch yet another personal-best bag of bass…and he did.

This afternoon, just as the weigh-in started to shape up into yet another local shootout between Guntersville rivals Alex Davis and Justin Lucas amid falling snow, McMullen melted the flakes with 29-pounds, 6-ounce to steal the show, winning the event with a three-day total of 86 pounds, 7 ounces worth $40,000.

And no one was more stunned than McMullen himself.

“I had no idea,” he said. “No idea whatsoever. I’ve never caught bags of bass like this so I honestly had no idea what I had. This is the greatest lake ever. I’m going to try to get my wife to move down here.”

While other top finishers targeted more main lake areas, McMullen stumbled onto an untapped “backwater” area. He referred to it as a backwater because it was so far back in a creek that he had to go under a culvert to reach it. The maximum depth of his water was 10 feet and he targeted shallower 5- to 8-foot zones in the area. 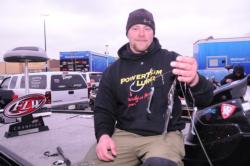 “All I know is that bass were funneling in there by the truckloads, I guess getting ready to spawn,” he said. “Each day I was amazed at how many new fish were in there.”

McMullen figures the fish were “new” because of how white and uncolored they were.

“Every now and then I would catch a 2-pounder and it would be really bright green with distinct coloring,” he said. “But when I hooked those big 6- to 8-pounders, they were just so white looking.”

He said the area featured bare shell bars and stumps. Once he identified the specific spots, he could catch multiple fish off them.

“There was also just an enormous amount of bait back there,” he said. “At times the gulls would dive on the bait, especially early in the morning. The gulls would come and go, but the bait was always thick back there.”

McMullen’s bait of choice all week was an umbrella rig, a Yellow Hammer spinnerbait rig featuring “teaser” blades in the middle. He trimmed the rig with 1/8-revenge heads and 4-inch Keitech swimbaits and fished it on a Shimano Crucial Umbrella Rig rod spooled with 50-pound test Suffix 832 braid.

Now, not only has McMullen fished Lake Guntersville, but he is an EverStart Series Champion on the lake of his dreams. 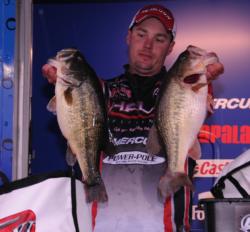 Davis won the EverStart event on Guntersville in May of 2012 on an Alabama Rig and this week he fed them the same thing.

Davis was fishing ledges in 12 to 16 feet of water on the lower end of the lake, which featured rock and stumps. But he noted that he could not “call his shot” in terms of being able to isolate specific pieces of cover that would produce a bite.

“For me it was more a case of big shad roaming up and down the ledges and the bass following them,” Davis said. “I would fish long stretches back and forth and I never knew when one was going to load up on it. I tried to waypoint places where I got bites, but I never could get bit in the exact spot twice.”

Justin Lucas of Guntersville, Ala., is getting awfully tired of playing second, and now third, fiddle on his home lake. He finished second last year to Davis. 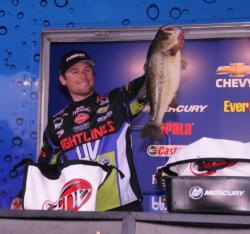 “How can I be mad about that?” Lucas laughed. “I had the best week of fishing I’ve ever had on Guntersville. I caught the biggest bass I’ve ever caught on this lake on the last day of the tournament. I mean it was a perfect week and I still got beat, I’m not going to complain about that. I made a small miscalculation the first day when I caught 23-4 and thought that would be enough for the top five. So I left my primary area to look at some other stuff, came in and I was 13th and I knew then I had kind of messed up. But it was an awesome week, no doubt.”

Lucas also used an umbrella rig all week in the midlake area. He sweetened the rig with hand-poured swimbaits and jigheads.

“Believe me, I didn’t exactly want to become an umbrella rig fisherman,” Lucas said. “But how are you going to argue with 81 pounds in three days? I simply don’t think there is anything else I can throw on Guntersville this time of year to catch that kind of weight.” 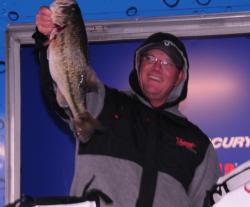 As predicted, the Alabama Rig certainly did its damage this week. The top three spots were taken on some kind of umbrella rig, proving that over multiple day events on Guntersville in cold water, it’s almost impossible to compete with.

But for those interested in non-umbrella rig techniques, that portion of the show begins now with Robert Boyd of Russellville, Ala., who used crankbaits, spinnerbaits, and single swimbaits to do most of his damage.

“I did catch one on an Alabama Rig, but my issue is I just can’t throw that thing all day because of my shoulders,” Boyd said. “At some point I have to put it down and go to single baits.”

Boyd haunted big schools of shad along rip rap in the Sauty Creek area. The first two days he used a Rapala DT-14 and DT-20 as well as a 1-ounce Booyah spinnerbait. Today he stuck to a single swimbait: a Basstrix on a 1/2-ounce jighead tied to 17-pound Vicious fluorocarbon line.

Skey fished the backs of creeks in 3 to 5 feet of water with a 1/2-ounce Strike King spinnerbait, double-willow leaf, and a Yum Flashmob, Jr., umbrella rig.

“I caught a majority of them on the spinnerbait and a few on the Flashmob with Zoom Swimming Flukes,” Skey said. 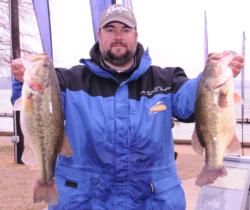 Rounding out the top-10 pros in the EverStart Series event on Lake Guntersville: