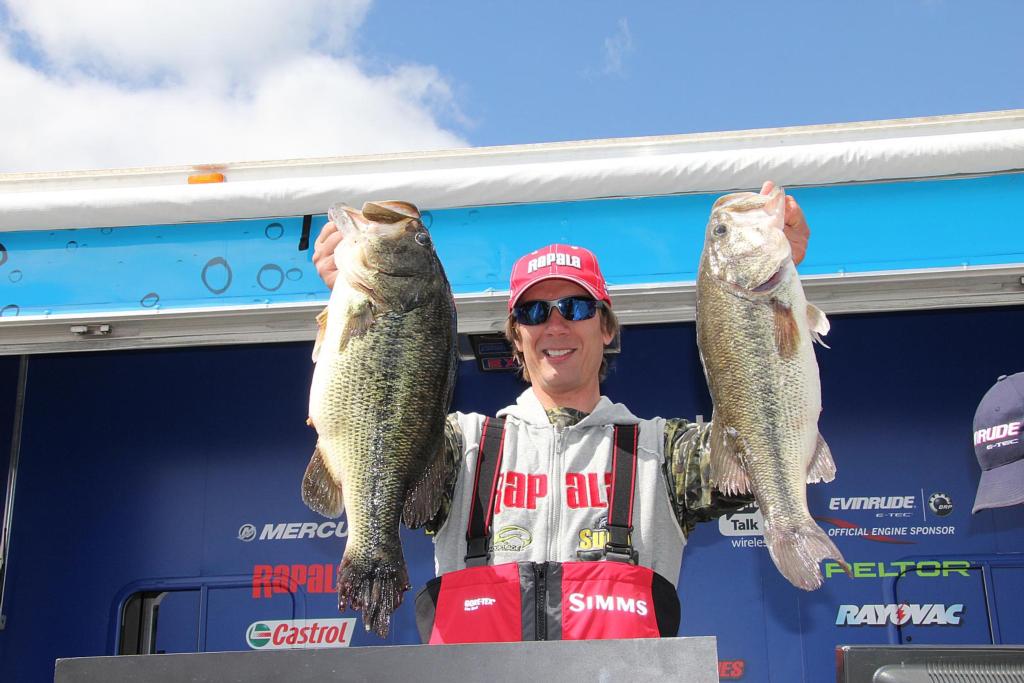 POTTSBORO, Texas – Troy Lindner certainly knows how to make an entrance. The California pro had wanted to fish Texas waters for some time and in his Lone Star debut, he grabbed the day-one lead at the EverStart Series Texas Division tournament on Lake Texoma with a whopping 27 pounds, 8 ounces.

“It’s a miracle and I just have to thank God just for being able to be out here and fish,” Lindner said. “I’ve been following the reports on a Texas fishing forum and I’m really happy to be out here. I only got in a couple days of practice.”

Lindner said his day started off with a bang, as his biggest fish – an 8-pound, 10-ouncer that took Big Bass honors – bit on his first cast of the morning. He had found the fish two days prior and fortunately, she was in a cooperative mood this morning. 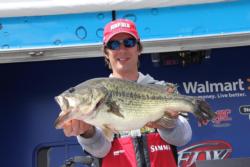 water,” Lindner said. “You could see her from 100 feet away. She looked like a big carp sitting under there.”

The rest of Lindner’s day consisted of working the protected waters of marinas, where he fished lots of docks, along with adjacent structure. This, he said, was not his preference, but rather a reaction to the day’s conditions. Overnight and early into this morning, a major storm system raged across southern Oklahoma and brought winds of 20-25 mph. Reports of brutal lake conditions had the waves at 6 feet. Wind certainly has its benefits for bass fishing, but with limited lake knowledge, Lindner decided to leverage the calm, protected waters and just focus on fishing.

“I had some fish on some points – some nice smallmouth – but I couldn’t really hold (boat positioning) in that wind,” Lindner said.

Lindner, who leads the pro field by a margin of 5-8, was understandably guarded with his bait details, but he did say he was fishing reaction baits. “I did slow down in some areas. It was OK – you’d get bit. But I was just trying to find the ones that were hot. And I was trying to cover a lot of water.

“I was trying to put together where exactly they were sitting in these marinas. That big one was in the middle on a ladder and my second-biggest one was under a dock in 30 feet. The fish were all suspended. They were in probably the first 10 feet of the water. They’re not on the bottom.”

After a dreary morning and early afternoon, the sun started peaking through clouds around 2 p.m. and skies were only partly cloudy by the 3 p.m. weigh-in. With the day-two forecast calling for warmer, calmer and sunnier conditions, Lindner said he’ll approach the second round with an open mind.

“I’m just going to go out and cover some water,” he said. “I’m going to hit some other marinas. I’m still trying to learn the lake and put together (a pattern). I did it one day, but it’s so challenging. I’ve fished 30 EverStarts and I’ve only won one. To put together three days in a row is so challenging, but that’s what makes it so much fun.”

In second place, Jeff Cade of Richardson, Texas, sacked up a limit that weighed 22 pounds. Given 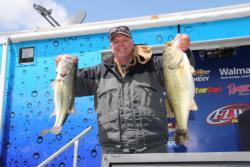 the conditions, he decided to fish closer than he would have liked to run. However, his day got off to a good start and he rode the enthusiasm to the end – even through a dry spell.

“I caught an 8-pound, 9-ounce bass in the first 30 minutes,” Cade said. “Anyone who fishes much knows that momentum is a big part of it and that really settled me down and got me going. I caught several fish early and then I went a long time without a fish and then I got on a pretty good bite late and lost about a 6-pounder with 30 minutes left.”

Cade said he got on a good reaction bite in practice and with the day’s windy conditions, he knew that it would likely hold up. The plan worked for part of day one, but Cade also threw a 3-arm umbrella rig baited with pearl colored Gene Larew Sweet Swimmers. 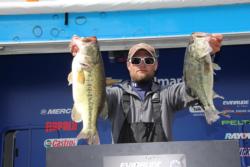 Defining diligence, Eric Wright of Scurry, Texas, had to idle for over an hour to reach far into a creek where he had located quality bed fish in practice. The effort paid off with a 21-pound, 11-ounce bag that earned him the third-place spot.

“I had some big fish up on beds and once we got in there it didn’t take 10 minutes to catch them,” he said. “We broke down about 11:30. I had five before I broke down, but I knew I needed two more fish to cull. Everything I caught today came from sight fishing beds.”

Wright caught his fish with Texas-rigged plastics and drop-shots. He did not divulge his choices of plastics, but he offered this tactical explanation: “When a fish is really locked on the bottom on a bed, I’d use a Texas rig, but when the fish was a little bit off that bed and not on the bottom, sometimes that drop-shot will trigger them, when they’re suspended off that bed.” 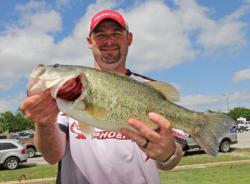 gears, switched to game plan B and put together a limit of 20-6.

“I spent 3 1/2 hours without a fish, trying to do what I thought I could do to try and catch a big bag,” he said. “I went to Plan B and the fish were still in there, but I just didn’t catch them the way I thought I was going to catch them, but they were still big fish.

“The wind can help you or hurt you – I just depends on if you use it to your advantage or sit and fight it all day. I was fortunate that I was able to make a few adjustments and catch a few fish.”

Hallman said he had been sight-fishing productively in practice, but the combination of today’s colder weather and muddy runoff from the storm’s showers must have displaced his fish. He expects the fish will return with tomorrow’s clearer conditions.

Hallman caught all of his fish by flipping deeper water with a homemade 5/16-ounce brown jig with a green pumpkin trailer. 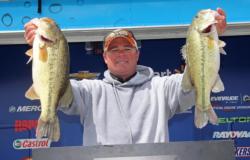 Dillon Lee of Mount Pleasant, Texas, took the fifth-place spot with a limit of 20-3. Working the shad spawn around docks, Lee caught his fish on a Combat swim jig with a swimbait trailer. He also caught fish later in the day on windy points.

“I had one key area, I got to it this morning and grinded on it for a little while,” Lee said. “The wind helped a lot with the way we were fishing today.”

Rounding out the top-10 pro leaders at the EverStart Series Lake Texoma event:

Randy Hicks of Lumberton, Texas, found a nice limit of 19-7 and took the day-one co-angler lead. He ended up catching his fish on spinnerbaits and swim jigs around docks. A thorough approach to the dock scenario, he said, was important to his success.

“I fished the docks and the areas in between the docks, especially if it was a secondary point that had 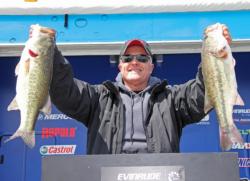 some rocks on it,” Hicks said. “That’s where two of my bigger fish came from. We were just going down the bank and working in between these docks.”

Most of Hicks’ fish bit in 5 to 7 feet of water. He also fished a shallow ledge 20 to 30 yards from the bank. Slow rolling his baits was the most effective presentation.

Ray Peace of Arlington, Texas, took second place with 18-1, while Clint Alford of Atoka, Okla., placed third with 16-7. Darren Scott of Fort Worth, Texas, took fourth with 15-4 and David Smith of Granbury, Texas, was fifth at 15-2.