Johnston surges ahead at Smith Mountain 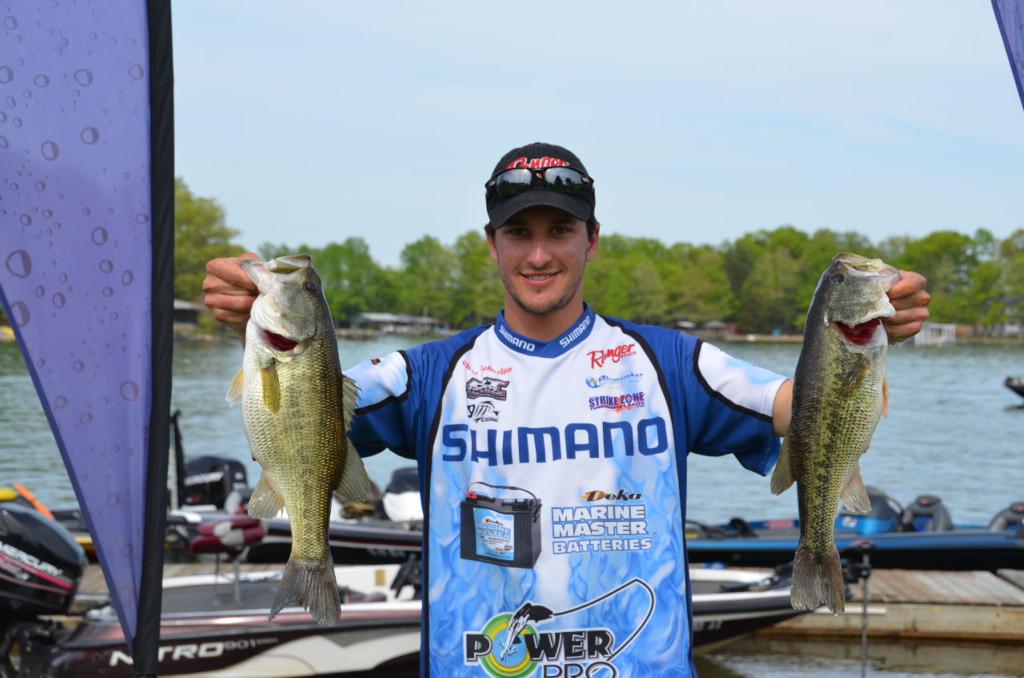 Chris Johnston of Peterborough, Ontario holds a pair of bass from his 15-pound, 6-ounce limit on day two that put him in the lead. Photo by Kyle Wood. Angler: Chris Johnston.
April 26, 2013 • Kyle Wood • Toyota Series

HUDDLESTON, Va. – Following the general trend of sight-fishing tournaments, today’s weights slipped some. High skies and no wind made it ideal to search out the remaining fish on beds, though they are beginning to dwindle in size. Chris Johnston of Peterborough, Ontario kept on pace to rack up 15 pounds, 6 ounces today to set him in the driver’s seat for the final day of the EverStart Northern Division event on Smith Mountain Lake with a total weight of 33-8.

Johnston’s main focus had been on the larger prespawn bass that are roaming the shoreline but the lack of wind today hurt that bite. So, the Canadian pro took advantage of the conditions to pluck a few fish off beds.

“I tried to go for some big bites this morning doing my prespawn thing,” said Johnston. “I only gave that 20 minutes then I went to check some beds. I have over 100 bedded fish marked on my graph and a few were pretty close to where I started. I was just casting around as I pulled up to my first bed and I caught a nice big prespawner. Most of my fish today came off that one area.”

As good as these pros are it often times takes catching a break to really help propel an angler through an event and Johnston is a shining example of that.

“I saw a fish bust up on the bank today and it looked like a good one,” said the 23-year-old pro. “I casted at it and ended up throwing over a tree. I thought to myself that I would probably get bit while my bait was dangling over it and sure enough a 4-pounder blew up on it. I had that fish hanging in that tree and I rushed in there and got it in the boat. That was my biggest fish of the day.”

After his early success, Johnston went looking for a big bite but couldn’t find one. He ended his day back sight-fishing and caught a 3-pounder that helped his cause with about 20 minutes left in his day. Johnston says that he had some fish left on beds but most of the ones he has seen are impossible to catch.

With some clouds and wind forecasted for tomorrow Johnston hopes that will get his prespawn fish in the feeding mood.

“If the weather does change tomorrow I think it will get those bigger fish going. I have a spot that is loaded with big fish but I have only caught one from there and it was in practice. I check it every day but can’t get bit. A weather change just may be what those fish need to get in the right mood. You can bet I’ll be stopping there tomorrow.” 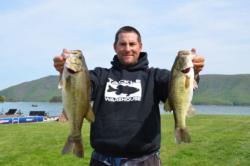 He carried the lead on day one with 18 pounds, 13 ounces but the bite was tougher for Joseph Wood of Westport, Mass., today. He wrangled up 14-2 to bring his two-day total weight to 32-15 – just 9 ounces out of the lead.

Surprisingly as tough as the bite was for many anglers, Wood actually caught more fish today.

“This weather was perfect for sight-fishing all day,” said Wood. “I caught probably 20 fish today and saw a lot more fish up shallow. Most of the ones I have seen are just the little 2-pound bucks on bed.”

Working his same plan as yesterday, Wood spent his entire day looking for fish on beds. He had his weight for the day by noon and was unable to catch any more fish that would have culled. He did see a few bigger fish swimming but just couldn’t get them to eat.

“It was just a lot easier to fish the way I wanted to today. I try to keep mixing it up in what I throw at a fish on bed. I try not to show the same thing for more than a couple minutes and I think that has been really important.”

Wood has been focusing primarily on largemouths unlike many of the other anglers who have been targeting the smallmouths that are up on bed. But with potentially less-than-ideal conditions to sight-fish on the final day is Wood nervous?

“I’m still pretty confident that I can catch a limit. If it’s real dark tomorrow I’ll probably change my plan. I think I can still fish my areas and get bit. But if there is enough light to see through the water easily then I’ll keep sight-fishing. I still have a few big ones to catch that I saw today.” 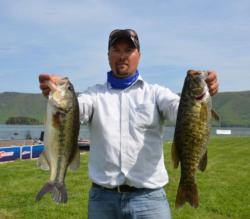 With the help from his 16-pound limit today, Ron Nelson of Berrien Springs, Mich., moved from the eighth spot yesterday up to third with a two-day total of 32-15.

Nelson has been focusing on the bigger smallmouth that are on bed and so far its proving to be fairly consistent considering his day one limit weighed 16-15. Despite his consistency, Nelson is starting to feel the pressure of running out of fish.

“I caught five yesterday pretty quick and basically took my partner fishing the rest of the day,” said Nelson. “Today was a lot more of a struggle. I was just slowly gaining ounces all day. The fish were biting funny too, like they would miss the bait and then bite it, and miss it again. But I have had a fun week and both days have been great.”

With many of the prime spawning grounds being picked clean over the past few days it remains to be seen if the sight-fishing guys – like Nelson – can hang on for one more day.

“I really hurt myself yesterday by not checking other places out. Today I had to waste a lot of time looking around and I’ll have to do that tomorrow. I still have fish on beds that I can catch but they are shrinking in size and numbers.”

Hudson up one to fourth 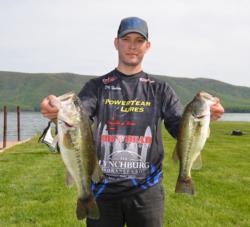 Local pro Derik Hudson of Hurt, Va., stays in the hunt after posting 17 pounds, 9 ounces on day one and 15-2 today. Hudson holds a total weight for the week of 32-11 and remains within sight of the leader.

Hudson is using a one-two punch to catch his fish this week. He is doing the sight-fishing game but is also keying in on the shad-spawn bite.

“I’m looking forward to the weather tomorrow,” said Hudson. “The weather will play to my strength and make that shad bite really pick up.”

The reason Hudson is so excited about the weather changing is because his shad bite has produced his kicker fish each day of the tournament.

Every fish – except one – Hudson has weighed in this week has been a largemouth. Though, Hudson did lose a big smallmouth in the last hour today. He was even graced with a bit of luck today as well.

“I hooked into one of my big fish today and when my co-angler stuck the net out the fish got hung outside of it. I quickly reached down and grabbed the fish and net and hauled them both in the boat. I was pretty happy about that.”

Hudson is reluctant to give out any secret baits just yet but does think PowerTeam Lures are playing a big role for him.

“PowerTeam Lures is a newer company so I think a lot of these fish get a fresh look at something new when I pitch at them. I don’t have to work as hard to catch my bedders because of that.” 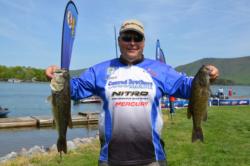 Donald Sheffey Jr. of Concord, Va., couldn’t match his day one weight of 18 pounds, 4 ounces but only fell two places with his 13-14 limit today. His overall weight stands at 32-2 to lock in the fifth spot for tomorrow’s competition.

Sheffey Jr. has been starting his days throwing a spinnerbait on points to try and take advantage of the 45-minute window to catch fish on the shad-spawn bite. One the first day he capitalized on that bite but today just couldn’t get anything to go. He spends the rest of his day sight-fishing.

“I used up most all of the fish I had today,” said Sheffey Jr. “I looked around some today and found three good ones. I managed to catch one so there should be a few more left for me tomorrow. All of the fish I have caught this week have been on bed for about a week. I’d like to stay after the smallmouth that are bedding because they have been weighing bigger than the largemouths.”

Sheffey Jr. has been doing most of his fishing up the lake since that is where the majority of spawning has been occurring. He hopes the cloud will help keep the shad-spawn bite rolling into the mid-morning hours tomorrow.

Rounding out the top-10 pros after day two of the EverStart Northern Division event on Smith Mountain Lake: 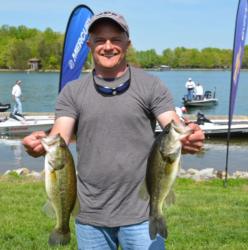 Dennis Burdette of Lindside, W.V., got off to an early start on day one with 13 pounds, 15 ounces to take the lead on the co-angler side. Struggling some today, Burdette found another limit weighing 9-7 to keep him in the lead with a two-day total of 23-6.

“The bite was tough today,” said Burdette. “I knew I needed five bites today and I got them. I only caught seven fish all day and lost one big one sight-fishing.”

He still wants to hold out on what he has been throwing this week but says it is a bait that has been working for a while on Smith Mountain.

“If I can catch a limit tomorrow I’ll feel pretty good. If the weather changes I may be able to get a couple good bites on topwaters or maybe a swimbait.” 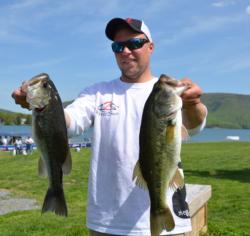 Scott Howard of Evington, Va., was the only co-angler to break the double-digit mark with his weights each day. With 11 pounds, 1 ounce on day one, Howard hauled in 11-11 on day two to put his total for the week at 22-12. He now sits just 10 ounces behind Burdette.

Howard has been catching his fish on a drop-shot while sight-fishing all week.

“I have been fortunate enough to draw two really good boaters,” said Howard. “Ron Brown and John Hutchins both put me on some good bedding fish this week.

“The fish have been surprisingly aggressive for me so far. I watched a guy today fish for a certain fish on bed without any luck and not long after he left my boater took me in there and I caught it.”

Howard may have the right bait dialed in to produce results like that in a tougher day for much of the field. With the success and consistency he has shown all week you would think Howard would want to continue to cast at fish he can see.

“I would much rather cast for prespawn fish. I have just been so lucky that I got two boaters that let me do some sight-fishing. I think my odds are better tomorrow though if I can cast around.”

Rounding out the top-10 co-anglers from day two:

Anglers will take off on Saturday from Parkway Marina located at 16817 Smith Mountain Lake Parkway in Huddleston, Va., at 6:30 a.m. Saturday’s final weigh-in will be held at Walmart located at 1126 E. Lynchburg Salem Turnpike in Bedford, Va., beginning at 4 p.m.