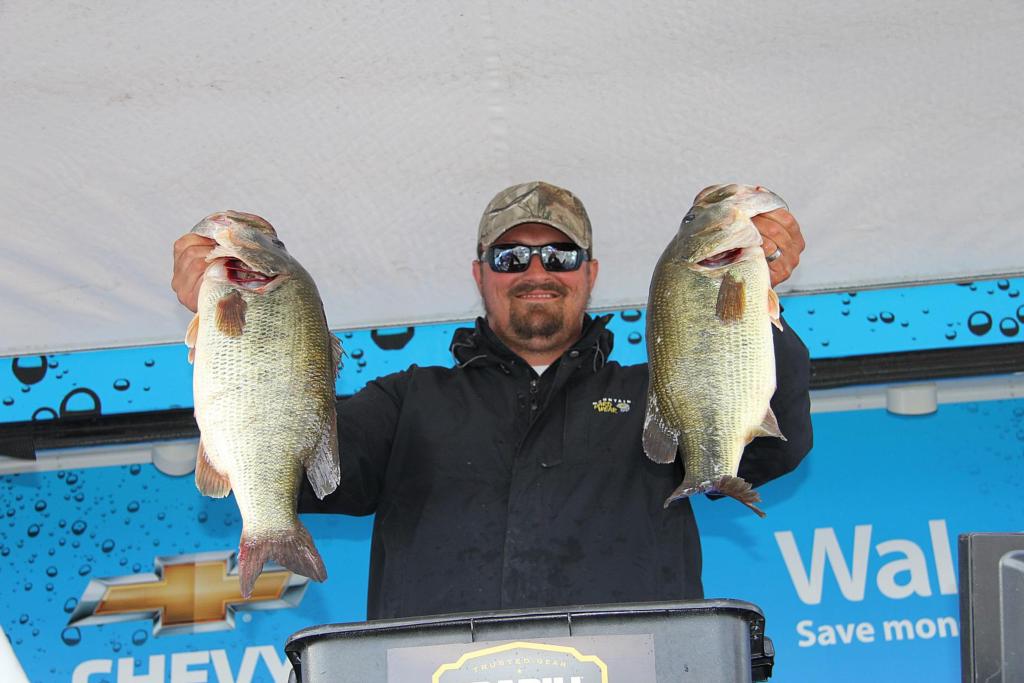 OAKLEY, Calif. – A mild cool spell painted the California Delta with dreary, overcast conditions and whipped up an increasingly blustery wind that rustled through the tules on day one of the FLW EverStart Series Western Division event on the California Delta. For pro leader Sean Stafford that was a dream scenario.

“When the wind blows hard enough, especially with the cloud cover, the fish are going to bite,” the Fairfield, Calif. pro said. “I had high hopes going into today.”

Stafford sacked up a limit catch that weighed 28 pounds, 12 ounces and gave him a lead of 3-8. 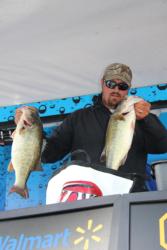 Today, he said, was about quality, while his practice catches produced greater quantity.

“I fished the last three days and I was catching nothing but small fish,” he said. “I probably caught 60 fish in practice only had one over 3 pounds.”

Stafford held his cards low on particular baits, but he did say that he fished reaction style lures. He was targeting fish over ledges in 3-8 feet. This scenario is a classic post-spawn position where big females go to rest and feed up after their bedding time.

One thing that Stafford noted was that his best action came from areas with abundant forage. 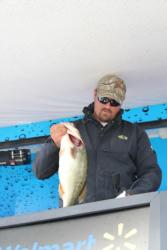 “There’s a lot of food in the area for them and they’re just feeding up so the bait in the area is really key,” he said. “I think the shad are starting to spawn a little bit in some of the areas, so the better areas are the ones where I’m seeing a lot of shad.”

Stafford said his morning started off strong and by 10:30, he had bagged the majority of his weight. The afternoon slowed down considerably, but Stafford said he thinks he may have discovered something that he’ll utilize for day two.

“My co-angler caught a couple of nice ones in the afternoon while he was doing something totally different (than earlier in the day). I’m hoping I can expand on that (on day two) because I’ve really been struggling in the afternoon.”

Tosh gets edgy for second

Stephen “Bub” Tosh, Jr. set the high mark early at 25-4 and held the lead until Stafford’s arrive in the last half hour of the weigh-ins. Known for his punching skills, Tosh actually took a different approach today. The day got off to a rough spot, but Tosh regrouped, dialed in a replicable pattern and got back on track.

“I was a little unlucky today – I lost a couple, my partner broke off one close to 10 and that really 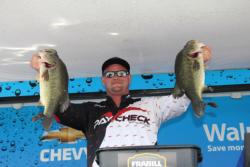 Tosh said he found the quality fish were relating to thick grass that had not yet reached the surface to form “mats.” Although the matting will eventually occur, he found a way to work with the current stage.

“I’m essentially fishing grass mats that will be topped out and will be solid flippable mats in another month or so, but the grass isn’t all the way to the surface – even on low tide. Just because it’s not to the top doesn’t mean it’s not still a mat. I’m fishing the corners of those mats.”

Tosh caught his fish on an unnamed swimbait and a dropshot baited with a prototype Yamamoto worm called a California Roll. The period from about 10 to 2 was most productive.

“Once the tide switched and as soon as it started going out, the fish pulled up on those corners and I was able to go through them,” Tosh said. 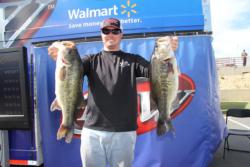 Miles Howe, of San Clemente, Calif. started his day by throwing a Senko and had a limit by about 10 a.m. After that, he switched to reaction baits and upgraded his bag to the 23-15 that put him in third place.

Howe targeted ledges in 9-12 feet of water. It’s not that he lacked interest or faith in shallower spots; he just wanted to find areas that would receive less traffic.

“I saw the shoreline get pounded by guys all week, so I decided to go deeper and try something different,” he said. “I did a lot of running today. I’d hit a spot, catch fish and keep running.”

Byrd slows down for fourth

Utah pro Benjamin Byrd was also pleased with today’s conditions, as they presented him with 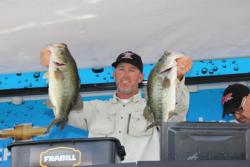 opportunities that he converted into a fourth-place performance with 23-9. Byrd caught his fish on a slow moving tactic and added his biggest, a 4-pounder, with 20 minutes remaining in has day.

“I think the weather probably pulled the fish out of the cover a little bit more to where you could access them a little more easily – for the first half of the day, for sure,” Byrd said. “Then, with the dropping tide at the end of the day, the low water kept them out there.

“With it being sunny in practice, the big ones were tucked in there so far it was really hard to locate any big ones and get them to bite. So yeah, the weather helped me today.” 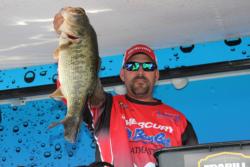 Aaron Cole, of Salida, Calif. took fifth place with a limit that weighed 23-6. He caught his fish on chatterbaits with Reaction Innovations Sweet Beavers and Lake Fork shad trailers in crawdad and bluegill colors.

“I had a game plan coming into the tournament, but with the rain and wind coming in today, I changed my game plan and fished my day-two water today and it worked out,” he said. “It was all reaction baits today. I had been on a punching program the last three days with the bright sun and hot weather, but with today’s conditions I didn’t think that would be happening, so I changed up and went to an area I found yesterday and they bit.

“The high tide was definitely better because we were able to fish over the weeds. When the water dropped out, we couldn’t fish much because the weeds were too thick.” 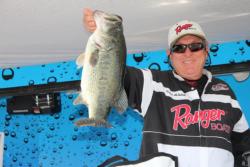 Dante Ray, of Sparks, Nevada grabbed the co-angler lead in dramatic fashion by catching the opening day’s second-heaviest bag – a 25-pound, 9-ounce limit that was second only to Stafford’s catch. Anchored by a 7-pound, 11-ounce largemouth that took Big Bass honors, Sparks’ catch put him on top by a margin of 5-15. 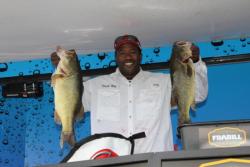 Sparks caught his fish on a dropshot, but he said the smaller bait that he’s using was the key. He didn’t want to reveal specifics, but he said the undisclosed bait triggered bites from fish of all sizes.

“I’m catching a lot of fish, so I’m weeding through numbers to get the quality,” he said. “There are two colors that I have working but there’s one color that’s working more consistently.”

Sparks said he was catching fish throughout the day in a range of 1-6 feet. Ideal habitat was rock levees with tules.

Rounding out the top-10 co-angler leaders at the EverStart Series Cal Delta event: