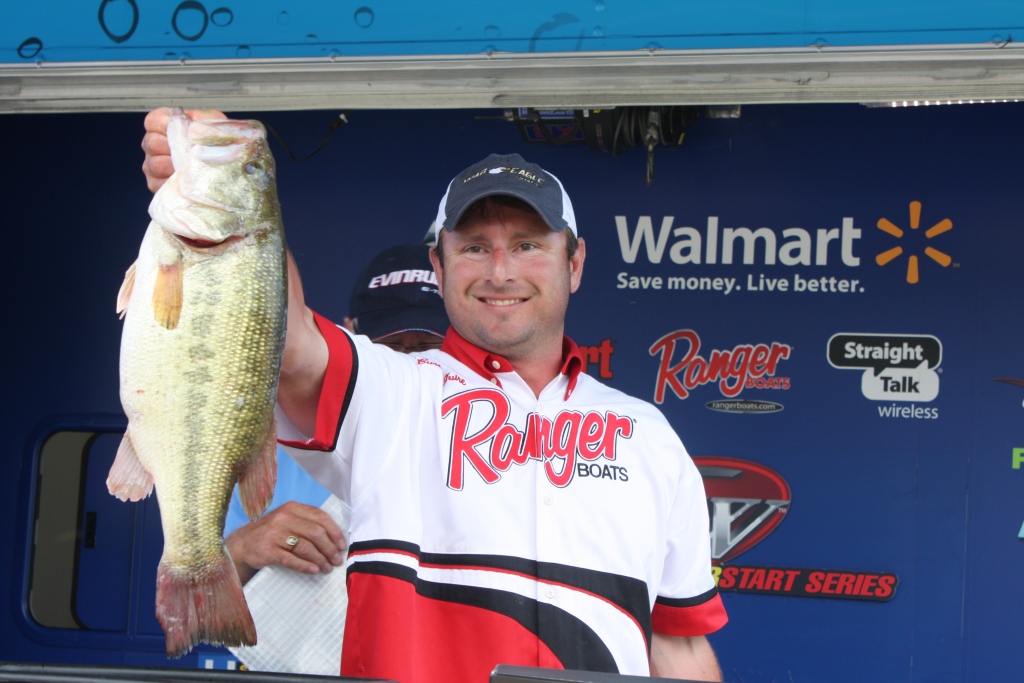 HARDIN, Ky. – As predicted, strong winds shook, smacked and stomped EverStart Series Central Division competitors up and down Kentucky Lake today, leaving more than one angler to mourn his blown-away hot spot with a tube of Bengay and a pack of ice.

While 190 limits were brought in today in true Kentucky Lake fashion, “only” four of them exceeded 20 pounds. Competitors talked onstage about whitecaps and boats lifted several feet out of the water, while others compared it to Lake Erie and even bull-riding.

No matter where they went, the rough water followed, and a lot of them tried to head south from Kenlake State Resort Park to the bass-rich areas between Paris and New Johnsonville, Tenn. Among them was Paris resident Curt McGuire, who ended opening day with a slim 1-ounce lead after busting a 25-pound, 2-ounce limit to set the pace.

“I went from north of Paris all the way to New Johnsonville,” McGuire said. “I fished over 50 schools. At 12:20 we turned north – it was rough.”

The biggest bass of the day’s biggest sack clocked in at 6 pounds, 14 ounces, which also claimed the day’s big-bass award in the Pro Division.

“We caught them all day, everywhere we went,” he said. “It wasn’t just one spot or one bait – it was just a good day.”

McGuire said no one was on his two best places, and though some of the competition probably saw him there catching and culling, he doesn’t think they will yield much tomorrow to him or anyone who might have seen him there.

“I hurt them pretty bad on my two best spots,” he said.

Though his lead might be as slim as it gets, those behind him on the leaderboard have plenty of reason to be scared – fully half of McGuire’s career top-10 finishes came here, and he won this event in 2010.

Gnewikow close behind in second 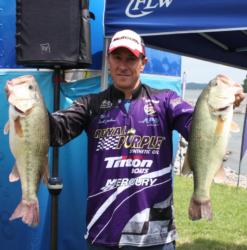 The man most closely nipping at McGuire’s heels is pro David Gnewikow of Mount Juliet, Tenn., who weighed in a 25-pound, 1-ounce bag to end day one in second. Not only that, but his spots yielded enough fat bass to put his day-one co-angler in first place by more than 2 pounds.

Gnewikow is another Tennessee boy who can frequently be found on the waters of Kentucky Lake, and he also took advantage of his extensive knowledge to establish himself as a force to be reckoned with in this tournament.

“I fish out here all the time,” he said. “I’ve got lots of schools, and I got a big one out of every school I fished. I caught most of mine around Paris, and it was extremely rough.”

Everything went Gnewikow’s way until around 11 a.m., and it was then that he had to, as he put it, “scrap everything” and go practicing.

“I went looking for new stuff, and I found good ones,” he said. “I hope they hold up.”

Davis practices his way to third 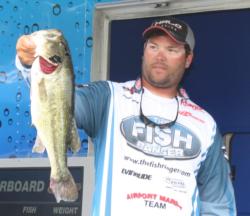 Clent Davis of Montevallo, Ala., ended day one in the third position with 21 pounds, 12 ounces, a limit he put in the boat after his original plan didn’t pan out because of the wind.

“The wind beat the crap out of me,” he said. “I tried to make the long run, but that didn’t work out too well.”

Luckily for Davis, about everything else did. He said it took about 15 casts before he found his mojo.

“I mainly just practiced, because most of my stuff was blown out,” he said.

However, that leaves his original stuff ready and waiting for him tomorrow, when the winds are not expected to wreak as much havoc.

Amerson, Wooley round out top five 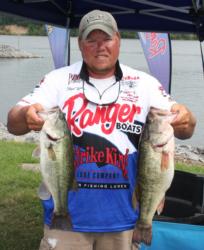 In the No. 4 position is Keith Amerson of Selmer, Tenn., with a day-one limit weighing 20 pounds. Behind him in fifth is Michael Wooley of Collierville, Tenn., with 19 pounds, 9 ounces.

Rounding out the top 10 pros after day one on Kentucky Lake: 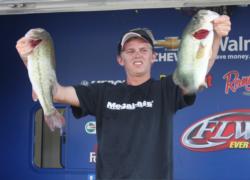 Capitalizing on a seat in the back of Gnewikow’s boat, co-angler Ben Jackson of Paducah, Ky., hauled in a limit weighing 19 pounds, 2 ounces to take a solid 2-pound, 1-ounce lead in the Co-angler Division.

“It was a fabulous day,” he said. “I got really lucky. We started catching them at our first place. Then the wind started blowing and screwed everything up, but that first place was loaded.”

Jackson’s limit was anchored by a 4-pound, 11-ounce kicker. 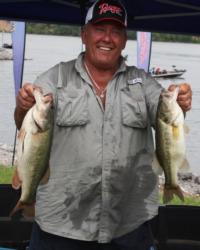 Tied for second on the co-angler side are David Carroll of Manitou, Ky., and Marvin Maxwell of Tunnel Hill, Ill., both of whom caught a limit of bass weighing 17 pounds, 1 ounce.

In fourth is Jim Eakin of Fort Leonard Wood, Mo., with five that weighed 16 pounds, 1 ounce. Behind him in fifth is Leonard D. Hoskins of Louisville, Ky., with five bass weighing 15-8.

Rounding out the top 10 co-anglers after day one on Kentucky Lake: