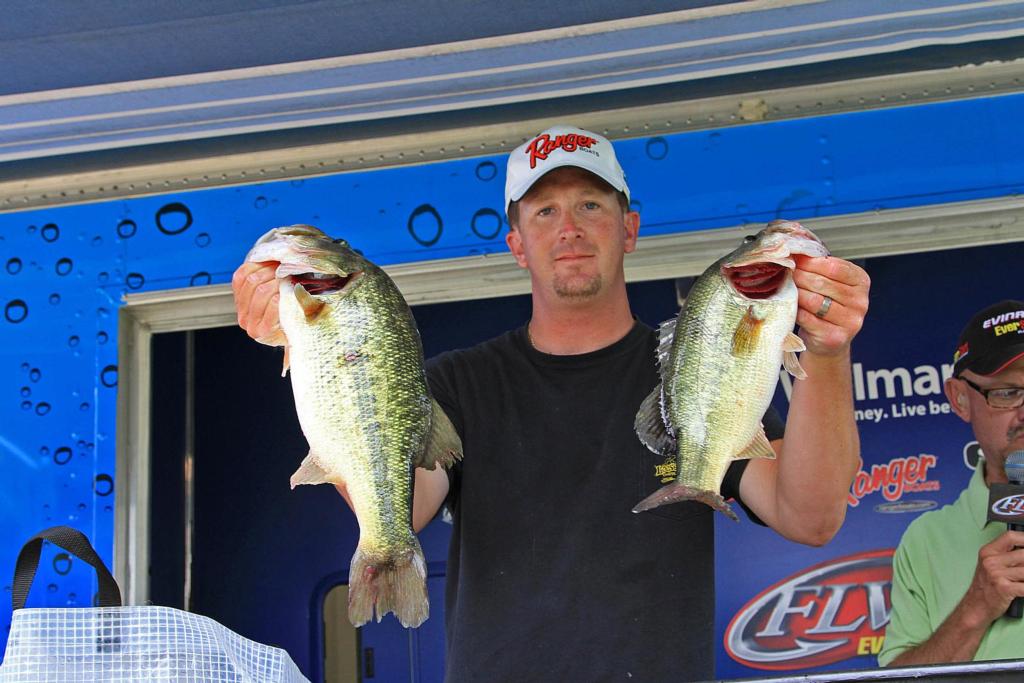 MARBURY, Md. – Windier-than-expected conditions had much of the Potomac stirred and murky, but by the end of day one at the FLW EverStart Series Northern Division tournament, two things were clear: First, this tidal fishery was not in its most generous mood – at least in terms of quality bass. And second, this is anyone’s game.

To the first point, the Potomac River is capable of more than the 5-pound, 2-ounce and 5-pound, 4-ounce fish that earned Big Bass honors in the pro and co-angler divisions, respectively. Several anglers reported catching plenty of fish, but lamented the lack of big bites.

As for latter point, just take a look at the tight groupings atop each division: On the pro side, 7 ounces 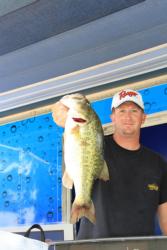 separates first place from second and the gap between first and tenth is 3-6. For co-anglers, the corresponding ranges are 9 ounces and 3-4.

Most agreed that tomorrow’s forecast for more sunshine and lighter winds will likely help the fish regain their composure in the wake of a mild, yet nonetheless impactful cold spell that moved through the region on Wednesday. This cool-down, which followed Tuesday’s heavy rains and thunderstorms dropped water temperatures into the upper 70’s – hardly “chilly,” but tumbling from the low- to mid-80’s is enough to give these big sissies we call largemouth bass a bad attitude for a day or so.

Notwithstanding this short-term forecast, pro leader Bryan Schmitt said he attributes the rather lean productivity to a seasonal variance. Most years, he said, the bass would be much more cooperative by the third week of June, but this year is just a bit tardy. 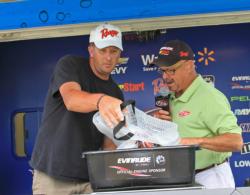 “The spawn was a little bit later (this year),” Schmitt explained. “Usually, by now they’re all postspawn and feeding heavily, but they’re about two weeks behind. Only a few bigger fish are eating right now. The fish are a little funky. We need some hot weather.”

Sticking with his trademark style, the pro from Deale, Md., flipped and pitched a homemade black-and-blue jig around grass and sacked up an 18-pound limit. The routine remained the same, but he said he found new areas to fish.

Schmitt caught most of his bass in about 2-3 feet of water. He said he caught fish all throughout the day and both the morning’s outgoing and the afternoon’s incoming tide cycles produced. All told, he boated about 15 keepers.

In second place, John Hutchins, of Warrenton, Va., sacked up 17-9 to position himself right on 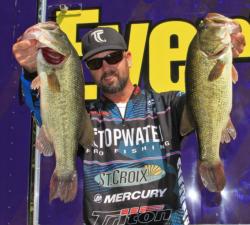 Schmitt’s heels going into day two. For Hutchins, the last hour of the morning’s outgoing tide and then the first couple hours of the afternoon rise proved most productive. Overall, though, he found the Potomac sorely lacking in consistency.

“The fish are really spread out right now,” he said. “The river’s fishing really differently this year – it’s like here today, gone tomorrow. You have to really be on top of them.”

Hutchins said his productive baits included a frog, a Senko, a jig and a buzzbait. 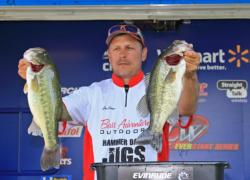 Third-place pro James Steiner, of Levittown, Pa., caught his limit of 16-5 during the concentrated periods of increasing water flow around the tidal changes.

Steiner said he was flipping and pitching Texas-rigged plastics around pilings upriver from the tournament site in Mattawoman. Timing the tide, he said, made his job more predictable.

“The fish position themselves once that tide starts moving and they’re real easy to figure out,” he said. “They’re usually on the (downcurrent) side of the pilings. They’re looking to ambush baitfish.”

Larry Kempler, of Bluemont, Va. took fourth place with 16-3. He, too, found it difficult to establish any 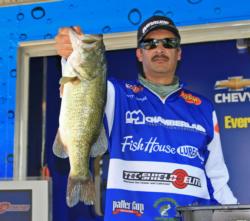 Kempler said his bait selection included a buzzbait, a Zoom Brush Hog and a ChatterBait. Combining moving presentations with flipping was his plan for the 4- to 6-foot zone he fished.

“I just had a lot of rods out and I was covering water,” he said. “I just tried to mix it up.”

Mosley mixes it up for fifth 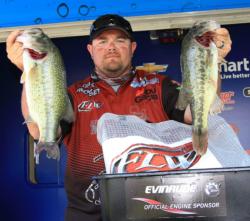 The tattoo of a popping frog on his right calf was a good indication of Rodney “Tank” Mosley’s bait preference, but today the Woodbridge, Va., pro also used a ChatterBait and crankbait to catch the 16-pound, 1-ounce bag that put him in fifth place.

“I’m running all over the river,” Mosley said. “I’m fishing rock, I’m fishing wood, I’m fishing grass. It’s been cloudy the last couple of days and when it got sunny today, it shut down the topwater bite. If it stays sunny tomorrow, they’ll eat topwater baits – they’ll adjust.”

Moseley said he stayed close and hit about nine different spots. He found his better action on the lower water.

Rounding out the top-10 pro leaders at the EverStart Series Potomac event: 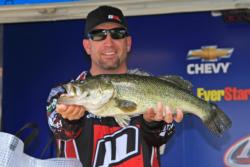 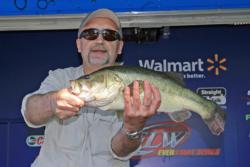 When your day starts off the way it did for Alex Antipenko, there’s sufficient grounds for optimism. This angling axiom proved appropriate for the co-angler from Brooklyn, N.Y., who topped the co-angler division with 15-2.

“On my second cast of the day, I caught a 5-pound, 4-ounce bass,” Antipenko said of his big start with a fish that ended up taking Big Bass honors.

Antipenko said he enjoyed a fairly active day with catches spread throughout the tidal stages. Fishing mostly around shallow grass, he said the best bites were on the tide changes.

Rounding out the top-10 co-angler leaders at the EverStart Series Potomac event: