In search of a ‘peake performance 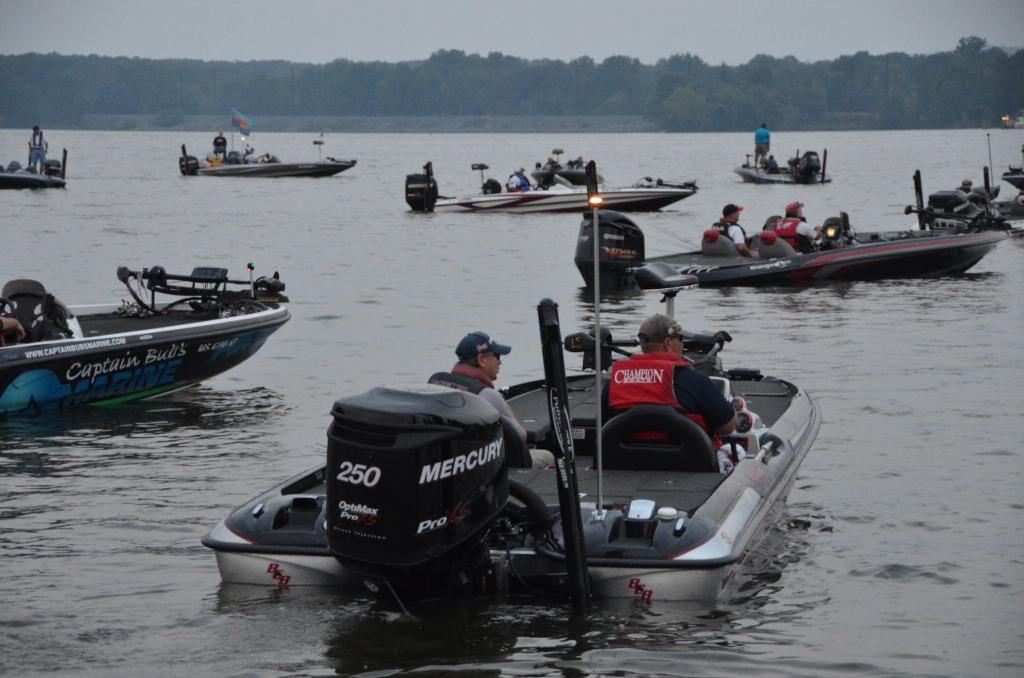 Opening takeoff is about to commence on the Chesapeake Bay. Photo by Gary Mortenson.
September 12, 2013 • Gary Mortenson • Toyota Series

NORTH EAST, Md. – With smothering humidity, light winds and overcast skies setting the table for Thursday’s action, EverStart Series Northern Division anglers departed the Anchor Marina shortly after 7 a.m. with the goal of unlocking the “transitional” puzzle that the Chesapeake Bay has thrown their way. While the “Bay” is normally billed as one of the best fisheries on the East Coast and one of the top tournament-fishing venues in the nation, this week should provide a very difficult and uncharacteristic test for the field.

“This place is a phenomenal fishery, but this tournament isn’t going to show it,” predicted Adrian Avena, a native of Vineland, N.J., who has extensive fishing experience on the Chesapeake Bay. “This body of water is in a transitional phase right now. About a month ago, these fish were biting pretty good. And in two or three weeks, they’ll be biting good again. But we’re in a tough window right now. Chesapeake Bay is transitioning over from summer to fall so it’s not going to fish as well as it normally does.”

“The grass bite has kind of been tough and the fishing has just been pretty tough overall,” said Terry Olinger of The Plains, Va. “I’ve fished here a couple of times and it’s usually very good. But I have a lot of buddies who live here who say they’ve never seen it fish as tough as it’s fishing right now. It’s a big body of water but it does fish kind of small. So I don’t think you’re going to see (weights) like you normally do here.”

Compounding matters for the anglers is the upcoming weather forecast. While the field should manage to escape most of the predicted late-afternoon thunderstorms, heavy winds look like real factors on days two and three. 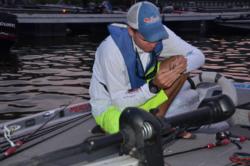 Another factor in play is the fickle nature in which the bass will react to the tides. Today, low tide comes in at 11:16 a.m. while high tide won’t present itself until the very end of today’s tournament day.

“There’s no doubt the tide is going to have a big impact,” said Avena. “For example, if you’ve fished here long enough you’ll know that there are certain docks that you have to hit on certain tides. But generally speaking, the bite will be better on the last hour of the outgoing tide and the first hour of the incoming tide. That being said, if you’re on some good fish and the water is moving, they’ll bite.”

In addition to the tides, anglers are also going to have to figure out whether the grass bite, which usually dominates competition on the Chesapeake Bay, is going to be good enough to carry them into the finals. If not, anglers are going to have to rely on a variety of hard targets – wood, docks, pilings and rocks – to survive Friday’s top-10 cut. 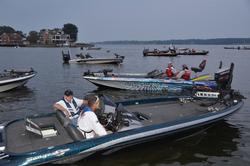 “There are usually big concentrations of bass in the grass and only single fish hanging out on the wood and rocks,” said Avena. “But this time of year, you can definitely win the tournament just fishing (hard targets). My guess is that the guy who mixes it up – catches them good on grass the first day and then maybe catches some nice bags on wood and docks the rest of the tournament – will have a pretty good chance to win this tournament.”

And what will it take to win?

As far as preferred bait and tackle, it appears that anglers will have a wide variety of choices to maximize their fishing arsenal.

“You’re going to see guys throwing a lot of traditional grass stuff,” said Avena. “I think ChatterBaits, swimbaits and buzzbaits will be effective. You’ll see some guys cranking rock. And you can also basically throw whatever you want to while flipping around docks. There are no real secrets here.”

During EverStart Series competition, pros supply the boats, fish from the front deck against other pros and control boat movement. Co-anglers fish from the back deck and compete against other co-anglers. Anglers are permitted to weigh in their best five bass each day. Every angler who receives weight credit in a tournament earns points that determine angler standings. The full field competes on days one and two, with the top-10 pros and top 10 co-anglers advancing to Saturday’s final round of competition based on their two-day accumulated weight. Winners ultimately will be determined by the heaviest accumulated weight from all three days. 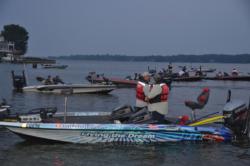 Want to watch the weigh in live but can’t make it in person? Then tune into FLW Live on FLWOutdoors.com 3 p.m. Eastern time to watch live streaming video and audio of today’s opening-round weigh in.

The EverStart Series tournament on the Chesapeake Bay is being hosted by the Cecil County Tourism Office. 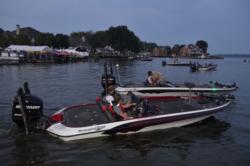 Wind: From the south-southwest at 4-9 mph

Day’s outlook: Partly cloudy with a chance of thunderstorms later in the afternoon.