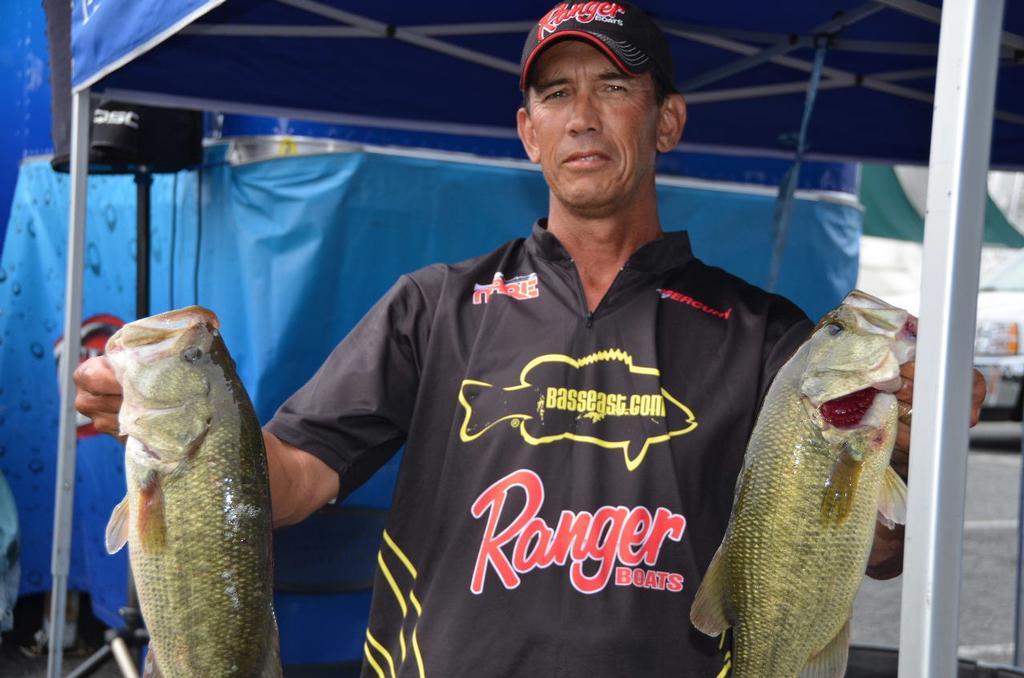 NORTH EAST, Md. – By almost any metric, fishing on the Chesapeake Bay was brutal today. Normally one of the most prolific fisheries on the East Coast, the “Bay” left plenty of EverStart Series anglers shaking their heads as they paraded across the stage Thursday – observing in almost lockstep accord that they’ve never seen this body of water fish so tough. To underscore this point, only 30 pros in the entire field even managed a five-fish stringer. On the co-angler side, a scant five anglers produced limits – an almost unprecedented occurrence for a tournament of this magnitude.

But like every tournament, there are always a select few anglers who can decipher the most complex of puzzles even on the most fickle and difficult fisheries. And today, top honors went to Hopewell, Va., native Frank Poirier.

Although Poirier acknowledged that he had a disappointing practice, he said that he learned just enough to come into today’s competition with a semblance of a gameplan.

“I really had a tough practice,” Poirier said. “So I didn’t come into today with a terrible amount of confidence.”

Poirier said that throughout the entire practice session he could only come up with a single pattern that showed any promise at all. But as it turned out, that pattern proved to make all the difference in the world in today’s competition.

“Heading into today, I really only had one pattern I had any confidence in at all,” he said. “And the first two places we stopped at today I missed a couple of good opportunities. But then things started clicking after that. I probably caught about a dozen keepers pretty early and then I began looking for more areas after that. I spent a good part of today fine-tuning my pattern and adding a couple of twists to what was already working.”

The Virginia pro said the key to his success was developing an “area-specific pattern,” which he ultimately parlayed into a 16-pound, 15-ounce limit.

“I caught most of my fish shallow to mid-depth,” he said. “I caught them on grass, wood and rocks. It’s more of an area-specific pattern than a pattern where you use a specific bait or target some specific cover. I’m also using a variety of methods to catch them – crankbaits, spinnerbaits and soft plastics.”

Not surprisingly, Poirier said he was more than pleased with today’s developments, especially given the fact that he wasn’t very optimistic heading into Thursday’s competition.

“It feels really good to be in the position I’m in now,” he said. “But more importantly, I feel like I can now catch five fish every day and that’s important here. I’m going to go with the same gameplan tomorrow, but I might expand on it a little bit. And if I can get a limit early tomorrow, I should be in pretty good shape.”

However, Poirier knows all too well the dangers of getting too complacent.

“I’ve been in the lead before and it’s really just a hot seat,” he said. “There are still two days to go. In some ways, I wish I was in second or third so I wouldn’t have such a big target on my back. But tomorrow, I’m just going to go out there and go fishing. And then we’ll see what happens.” 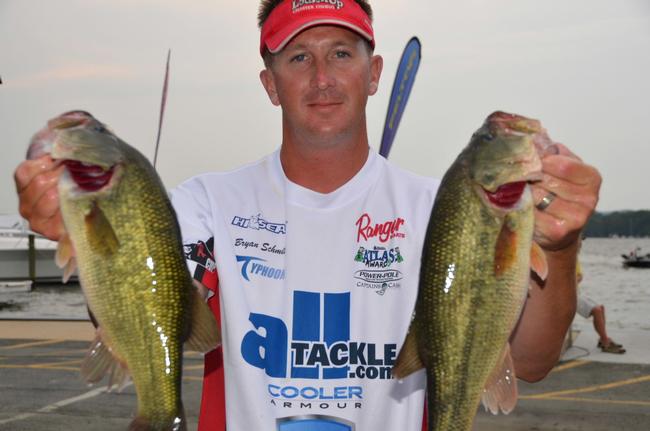 Bolstered by a catch of 16 pounds, 10 ounces, Bryan Schmitt of Deale, Md., found himself in second place and merely 5 ounces out of the overall lead.

“I personally feel like it was going to be a lot better than it was out there today,” said Schmitt, of landing in the runner-up position despite the difficult fishing conditions. “So I’m very satisfied so far, because it was tough out there.”

Schmitt said that one of the keys to his success was waiting out the grass bite – a pattern which many pros appeared to have abandoned earlier in the day.

“I found a couple of key areas in the grass and that’s what I fished today,” he said. “I fished grass early in the morning and really stuck with it. And the bite really turned on at the very end of the day. A lot of boats were on that same grass at noon but by 1:30 p.m. they cleared out because I think a lot of the guys got frustrated and discouraged. But I stuck with it.”

Schmitt said he targeted bass flipping a jig as well as with a combination of Senkso and swimbaits.

While Schmitt said he was happy with his second-place finish, he cautioned that Friday could bring a whole different weather element into play.

“Tomorrow could be a whole different day,” he said. “A cold front is moving in and if the wind picks up and blows hard in the afternoon, the bite could get really tough. And that’s why it was important to do well today. After tomorrow though, I should have a pretty good idea if I can win this tournament.” 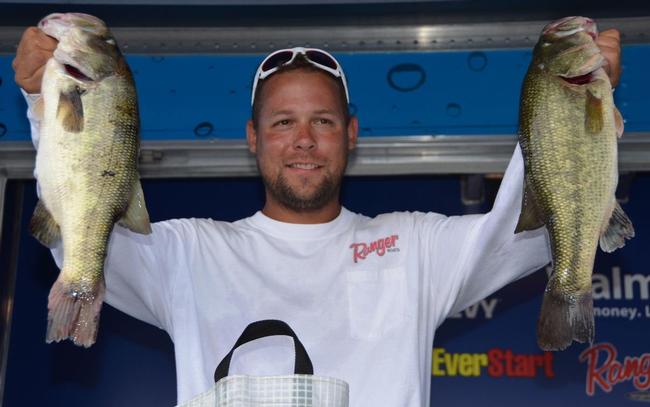 Heading into the Chesapeake Bay tourney, things weren’t looking too great for Matt Stasiak of Pittsburgh, Pa. For starters, he’d never fished this body of water before. And secondly, during practice, he developed a horrible sinus infection that nearly torpedoed his chances before the tournament even started.

“I got a sinus infection last Monday and that was really tough,” said Stasiak. “I wound up fishing 12 to 14 hours a day because this was the first time I’d ever fished the Chesapeake Bay – but it was terrible.”

However, although his practice session was far from ideal, Stasiak said he was able to rely on the tidal fishing experience he’d gained over the years on the Potomac River. As a result, he was able put together a semblance of a gameplan which ultimately paid big dividends.

“I know a little bit about tidal stuff because I’m familiar with fishing the Potomac,” he said. “This time of year the fish are in a transitional period. So I knew you just have to put the lure in the right place. And it paid off. I’m really confident right now. And I’m absolutely happy with how things have turned out today.”

Stasiak, who ultimately boated a total catch of 16 pounds, 2 ounces, said he targeted bass using a combination of reaction and “moving” baits, keying on grass and flipping the occasional boat dock as well.

“It took me all day but I finally figured out these fish,” he said. “I covered a lot of water today and almost ran out of oil from running around so much. My goal was to get to as many spots as I could. I’m fishing grass and boat docks but the bites were few and far between. With that tide, timing is everything.”

Standing in third place overall, Stasiak said he is going to try and relax as much as possible and keep a level-headed approach heading into Friday’s competition.

“I’m just going to try and cover as much water as possible again, do what I do best and have fun,” he said. 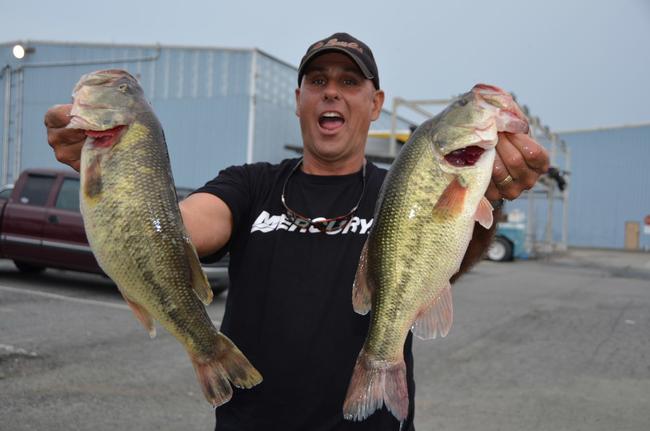 With nearly four decades of fishing experience on the Chesapeake Bay, Dan Rodriguez of Monkton, Md., probably had a bit of an advantage over the majority of the field coming into the event. And today that advantage showed. Using a total catch of 16 pounds, Rodriguez landed in fourth place overall and remained less than 1 pound off the overall lead.

“I feel pretty confident right now,” said Rodriguez. “This is my home water and I’ve been fishing here for 37 years. I know anything can happen on this body of water, but I really think I’m going to catch them again tomorrow. ”

Because Rodriguez is comfortable enough fishing this waterway, the Maryland native said he has no problem gambling on a few long runs – which is exactly what he did today.

“It took us about 40 minutes one-way just to get to our spot today,” he said. “So I’m making a pretty long run, mainly to fish two rivers. I’m basically targeting some wood, a little bit of grass and a mud bank. Today I wound up catching a couple of limits so I’m feeling pretty good overall.”

Rodriguez said that a customized jig has been the key to his success so far.

“I’ve got this homemade jig that they chew here like bubble gum,” he said. “I caught all of my fish on it so far and I’m definitely not putting it down.” 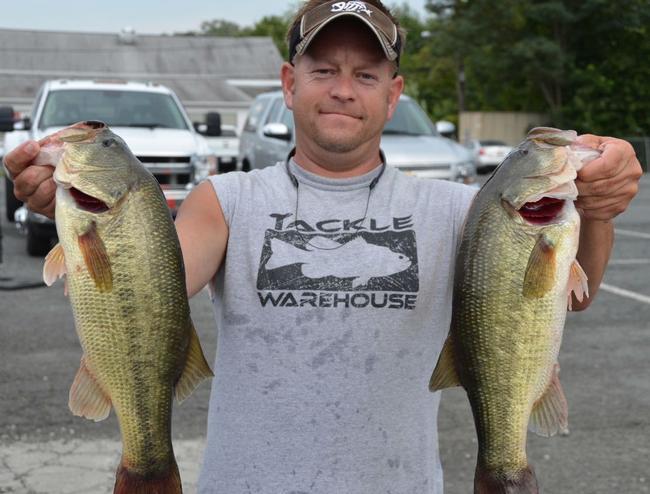 Meanwhile, David Wickenheiser of Edgewood, Md., landed the day’s big bass award in the Pro Division after netting a 4-pound, 15-ounce largemouth. The fish ultimately earned Wickenheiser a check for $152. 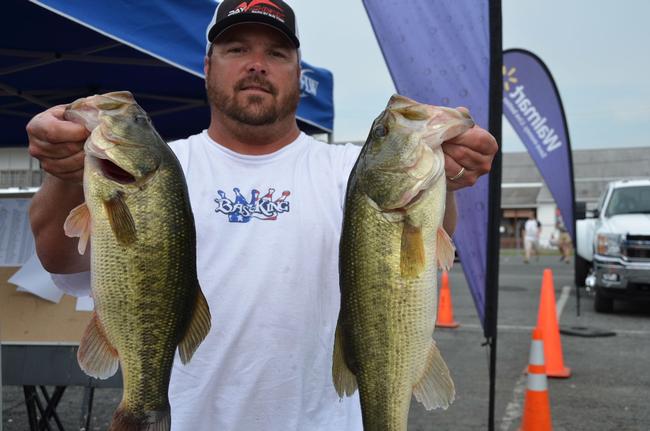 As one of only five co-anglers to return to the marina with a limit, Lenny Baird of Stafford, Va., was understandably pleased with his performance. Throw in the fact that Baird’s 13-pound, 12-ounce limit was good enough to grab the overall lead in the Co-angler Division and well, you had one happy camper.

“We just had a great day,” said Baird. “We had a lot of fun. I caught 20 plus fish today and I didn’t even catch 20 fish in all of practice combined. So yeah, I had a good day.”

Baird said that he targeted bass using a combination of jigs and rubber worms.

“We’re fishing in a small, shallow, narrow creek,” he said. “I was basically flipping wood. The tide was also perfect for us today. And it should be all week long as long as the wind doesn’t muddy everything up. Overall I feel pretty good. But there is still a lot of fishing left and anything can happen on this body of water. Tomorrow I just have to execute, get the fish in the boat and I’ll be fine.”

Harry Moore of Clarington, Ohio, parlayed a total catch of 12 pounds, 15 ounces into a second-place finish. 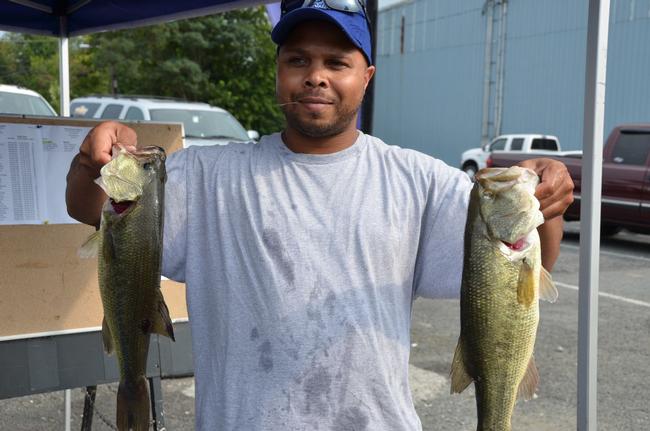 Marvin Reese of Gwynn Oak, Md., took third place overall in the Co-angler Division with a catch of 12 pounds, 7 ounces.

“This is my first EverStart event and the biggest tournament of my career so I’m pretty happy with the way things went today,” said Lang. “There are still two more days of fishing left so hopefully I can keep it up.”

However, for Lang, things didn’t quite go as scripted to start out the most important tourney of his young career. 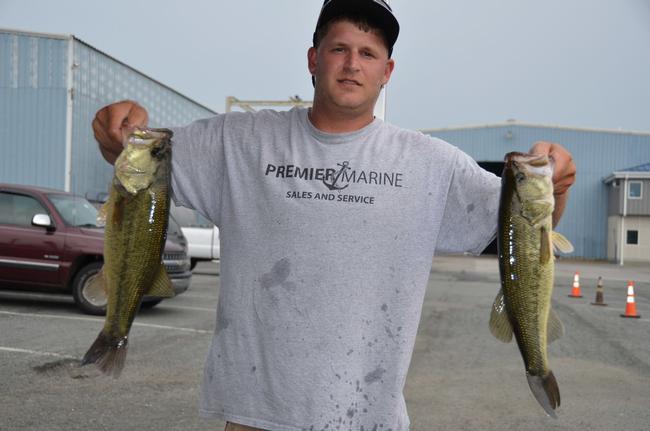 “My partner’s boat broke down early this morning so we’re forced to stay around the marina,” he said. “But maybe it was a blessing in disguise because we did pretty well.”

Lang said he ultimately targeted bass holding to submerged wood to land the majority of his catch.

“I was flipping a jig and pretty much did that all day long,” he said. “And it worked out pretty well in the end.”

Dick Gum of Woodbridge, Va., landed the day’s big bass award in the Co-angler Division after netting a 5-pound, 14-ounce largemouth – the largest fish caught in the tournament to date. 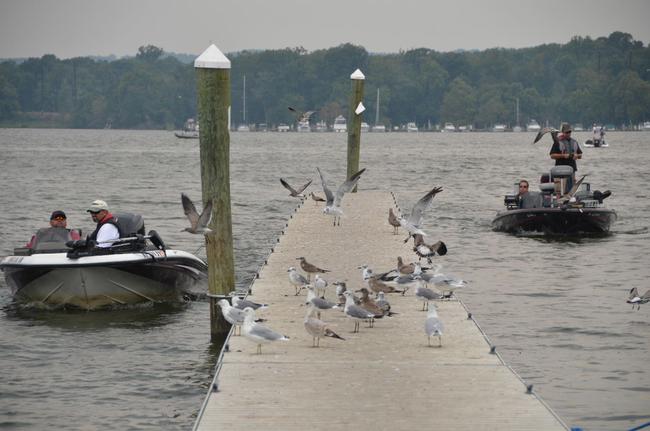