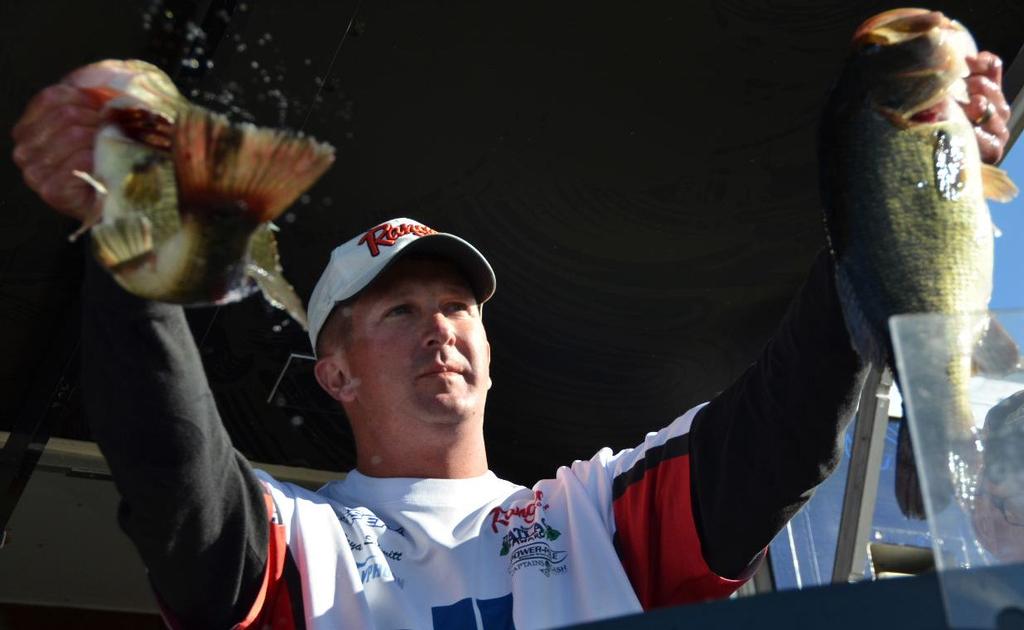 NORTH EAST, Md. – Before the start of the EverStart event on the Chesapeake Bay, Bryan Schmitt of Deale, Md., was having second thoughts about entering the contest. With a brand new baby at home, Schmitt had some real reservations about leaving his young family behind to go out and fish a tournament. However, as it turned out, the decision to fish this week is something he surely won’t regret. Although the Maryland pro started the day in fourth place, Schmitt turned on the afterburners and landed a whopping 21-pound, 1-ounce stringer – by far the largest sack recorded in the entire event – to cruise to victory.

“It’s just unbelievable,” Schmitt said. “We had a baby on Sept. 1 and I honestly felt a little guilty coming here. But hopefully my wife will be a little happier now.”

Schmitt said he targeted bass all week with a 6th Sense swimbait in an American Shad color, concentrating his fishing efforts on one particular trench in large grass flat. Although many anglers complained that the grass bite had completely died off this week, Schmitt stuck to his gameplan, never wavered and ultimately walked away with a tournament title.

“I fished exclusively in the grass flats all week,” he said. “That’s just what I do best. Basically, I fished one trench the entire time. I call it the `magic trench’ because the fish were migrating in and out of it all week. It was 6 feet deep surrounded by about 2 feet of water on all sides. And with the tide being so low today it really helped because those fish just (concentrated) in that trench. The tide really pulled those fish right into that spot. I’m actually surprised that there weren’t more people fishing there.”

Heading into the finals, Schmitt knew that he had to make a big move if he was to have any chance at the title. But he had some real concerns that his fish had dried up. As a result, he didn’t have a whole lot of confidence in today’s outcome. However, after the first hour of competition, all that changed. 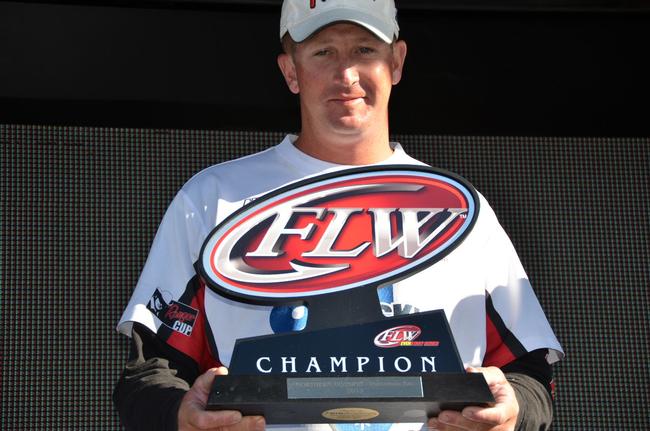 “I really thought my fish were done coming into today,” said Schmitt. “I really thought this cold front killed them. But first thing this morning, I realized that wasn’t the case and I had a real chance to win. I wound up catching all of my weight in the first hour. The tide was perfect and the fish just went off. Today they bit early and they bit late.”

In the end, Schmitt netted a total, three-day catch of 52 pounds, 4 ounces, out-fishing his next closest competitor by more than 2 full pounds.

“I really wasn’t quite sure what I had coming back today so I was still nervous,” he said. “You can catch some big bags on this lake and I wasn’t sure what the other guys had. So it’s definitely nice to win. It really was a tough week of fishing for me so it’s really been a very rewarding experience. I’m happy.”

Heading into weigh-in, Mike Moran of Ruff’s Dale, Pa., thought he’d done enough to pull out a victory. With an 18-pound, 14-ounce stringer in his bag, Moran knew full well that no one had landed that much weight in the entire tournament. However, when Schmitt stepped to the scales, Moran’s dreams of a tournament title were dashed. 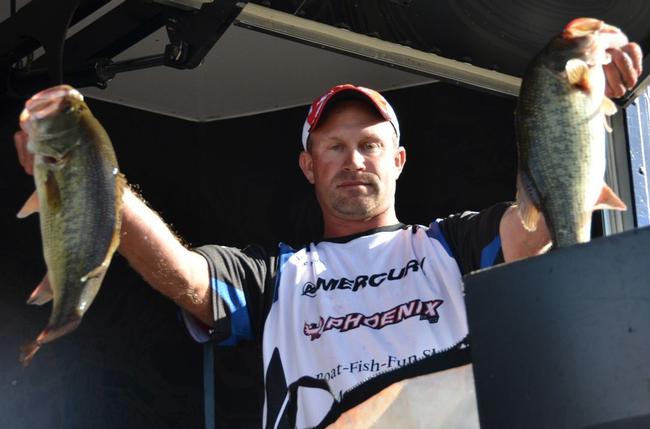 “I lost three fish today but I was still feeling pretty good until I saw (Schmitt) weigh-in,” Moran said. “But overall I had a good week. The people here are tremendous and everything has been first rate. I really can’t complain one bit.”

Like Schmitt, Moran said that he relied heavily on one prime fishing area to land the majority of his catch all week.

“I stayed in one place the entire tournament,” he said. “It was a stretch about a couple thousand yards long and I probably hauled 85 pounds out of there between me and my (partners) in three days. Today the bite was pretty steady all day. I just wish I could have stayed out there about an hour longer. But I definitely wound up catching a lot more than I expected to catch this week, especially after practice.”

Moran said that he capitalized on a flipping bite, targeting wood and hard cover with a Zoom Baby Brush Hog, while mixing in the occasional “moving” baits and ChatterBaits.

“I know this place has a lot of big fish, but the way it fished this week I’m really happy with the way things turned out,” he said. “I really did have a great week.”

Although Frank Poirier of Hopewell, Va., led the EverStart event on the Chesapeake Bay for the first two days, he failed to hold on the lead when it mattered most. However, despite ultimately finishing the tournament in third place, he took his final-day performance in stride. 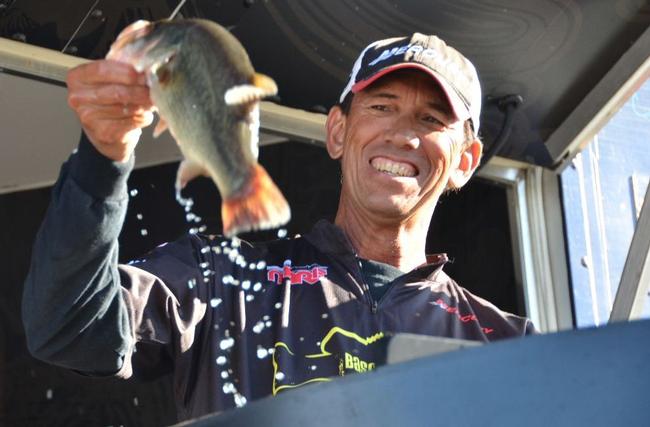 “Coming into this event I didn’t feel really good,” he said. “I had to find new fish every day and really had to scramble out there. But I’ve been blessed. It was a good week and a lot of fun.”

Poirier said that the wind really affected his bite in the finals, leaving his primary fishing holes high and dry during the finals.

“The places where I was catching fish literally dried up today,” he said. “That north wind blew straight down the bay and pushed all of my water out. So once again, it was a day of adjustments. I had to abandon my (primary) pattern with two hours left to go after some deeper fish.”

While Poirier acknowledged that he was in real trouble with the time ticking off the clock, his gamble almost paid off.

“I went for those deeper fish and, praise God, they were there,” he said. “I was targeting fish in about 3 to 4 feet of water, keying on rocks and wood. And during the last two hours of the day I probably caught around a dozen keepers. Those last two hours saved me because I was able to cull out everything I had. But it was just a crazy week. It was nuts. It was basically scramble, scramble, scramble every day and then make some more adjustments.”

Poirier said he used a combination of ChatterBaits, CP crankbaits and a Berkley Pit Boss to land the majority of his catch. Ultimately, Poirier’s 15-pound, 9-ounce catch in the finals (and 49-pound, 3-ounce total stringer) came up just short. But the Virginia pro still managed to net more than $6,000 in winnings. 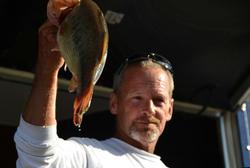 Fishing in his first-ever EverStart Series event, local pro Charles Harvey of North East, Md., managed to parlay a 40-pound, 14-ounce catch into a fourth-place finish. However, despite having some key local knowledge of the Chesapeake Bay, Harvey acknowledged that the tournament was far from easy.

“I’m a local pro so I really expected to see some bigger bags this week,” he said. “But the wind pretty much blew all of the water of my areas so I really had to scramble out there today.”

Harvey said he relied primarily on flipping a Booya jig at boat docks during the most of the final day of competition.

“Today I used a jig all day long, had five bites and got them all in the boat,” he said. “I came in fourth place overall and didn’t lose a fish all week – so it’s been a good week. I’m tickled to death just to have made the top 10.” 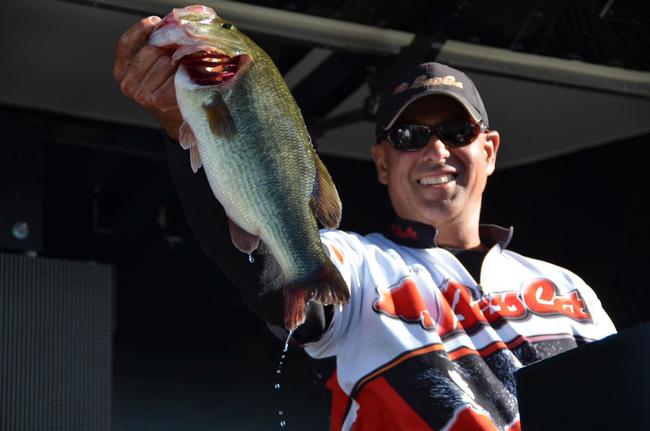 Bolstered by a total, three-day catch of 40 pounds, 8 ounces, Dan Rodriguez of Monkton, Md., finished the Chesapeake Bay event in fifth place. But like most of the other finalists, today’s windy conditions really threw a monkey wrench into the fishing strategy of the Maryland pro.

“The wind kind of messed me up, especially with my jig bite,” said Rodriguez, who targeted bass all week on a customized, homemade jig with a Havoc trailer. “I also lost two half decent fish on a crankbait so that didn’t help either. I made a really long run today and because of the wind I just decided to stay there all day because I wouldn’t have been able to get to my other spots. So it was tough.”

Rodriguez said he primarily targeted two rivers, keying on hard cover, rock and wood to land the majority of his catch this week.

“I fished that spot for the last 20 years,” said Rodriguez, who acknowledged that he has nearly four decades of fishing experience on the Chesapeake Bay. “You just try to make the right decision to win the tournament and today it didn’t work out. There are lots of big fish here but I couldn’t get enough of those big bites today.”

In the end, though, Rodriguez said he was happy with his overall performance.

“It was a great experience,” he said. “I love fishing the Bay. It’s just a great fishery. Overall, I had a good day and really good event so I’m happy.”

For his fifth-place finish, Rodriguez netted over $4,800 in winnings. 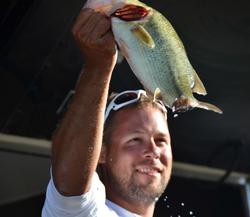