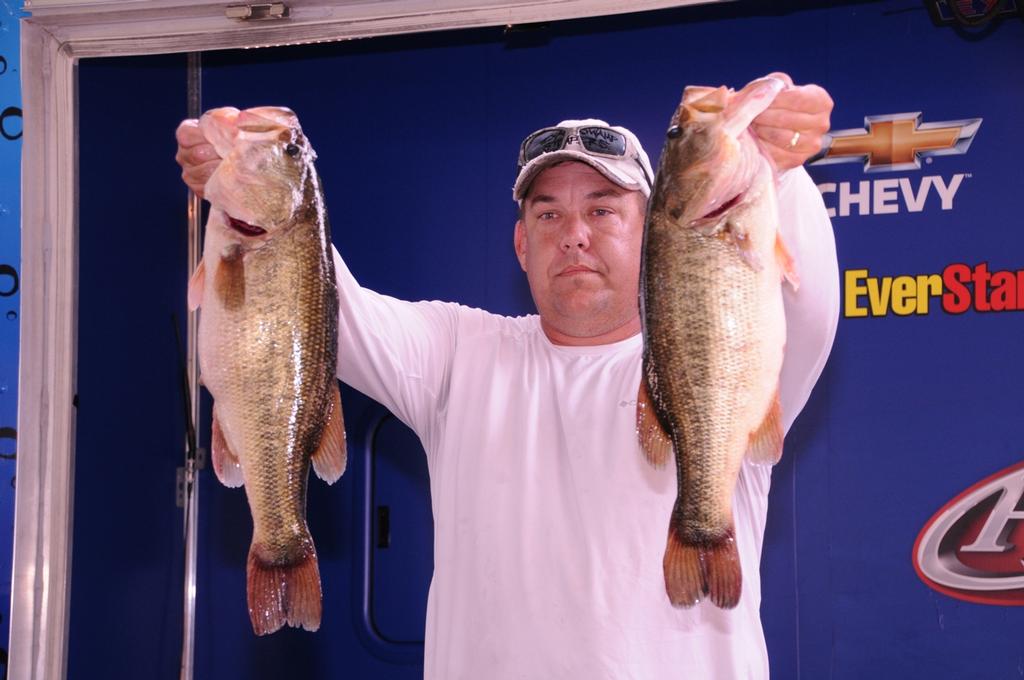 JASPER, Texas – The deep bite on Sam Rayburn Reservoir showed its true colors today, leaving many pros who tapped deep fish successfully on day one hanging out to dry on day two.

Several pros attributed this to shad vacating their primary areas. Depthfinders that blacked out with shad yesterday were blank screens today.

The one pro who has managed to put two deep-bite days together in row is Jason Wells of Center, Texas, who added a Friday catch of 20 pounds, 12 ounces to a Thursday catch of 18 pounds, 15 ounces for two-day total of 39 pounds, 11 ounces for the lead, albeit a slim lead at just 6 ounces.

Wells morning started slow, but he recovered his groove in the afternoon.

“I went back to the four places I have the most confidence in this morning and they were gone,” Wells said. “The shad, the bass, everything was gone. I didn’t catch a fish and I was about to lose my composure, but my co-angler settled me down and at about 11 o’clock I went to some different places and started catching them again. I caught my limit fish about at about 1 o’clock and then culled up twice after that.”

Wells reveled he is cranking brush piles in 10 to 15 feet of water.

“When I didn’t catch them early I started getting away from my cranking game, throwing Carolina rigs and Texas rigs and I really got off track,” he said. “But when I switched water I went back to cranking and kind of got back in my element with the crankbait. I caught a couple, things started going my way and I got in a groove again.”

As for tomorrow, Wells says he is most concerned about a north wind.

“I’m committed deep,” he added. “I don’t have any grass fish or anything shallow. I’ll live or die out deep. But if a north wind gets up, I could be in trouble because everything I have is exposed to a north wind.” 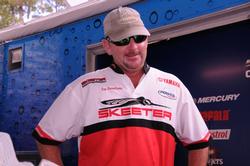 After catching 26 pounds, 4 ounces on day one for the lead, Ray Hanselman of Del Rio, Texas, slipped from the top spot today with a 13 pound, 1 ounce limit for a two-day total of 39 pounds, 5 ounces.

Yesterday, Hanselman described his experience as an, “easy day at the office,” with most of his catch in the well by 9:30. Today it was back to work, scrapping and clawing for every ounce he could get all day long.

“The shad left,” Hanselman said. “That’s all I can figure. Yesterday my screen would black out with shad. Today, nothing. I looked all around in there for the shad and they were gone. I did catch two fish off that primary spot, went to some other deep spots and caught two more, then went to the grass to finish a limit.”

As for tomorrow, Hanselman said he will try the “hammer hole” that produced so well on day one again in the morning. 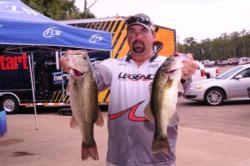 Philip Crelia of Center, Texas, moved up a spot to third place today with 15-pound catch for 34 pounds, 8 ounces.

Crelia caught 19 pounds, 8 ounces yesterday from deep brush piles, but today he had to drop back to punt in the grass.

“I started in the grass early, caught a couple of keepers, hit a few deep places and the shad were just gone,” Crelia said. “After fishing deep until about 10 o’ clock without a bite, I went back to the grass the rest of the day.” 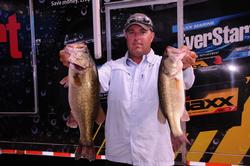 Kris Wilson of Montgomery, Texas, moved up a couple of spots to fourth place with a two-day total of 32 pounds, 10 ounces.

Wilson says his pattern is as close to junk fishing as it gets.

“I’ve just been scrambling around catching one here and one there,” Wilson said. “I’ve got one drain that’s got some good stumps in it in about 7 or 8 feet of water where I caught some yesterday. It wasn’t as good today so I flipped grass a while, caught a couple doing that. Then I picked up a couple off a deep spot or two, so I’m just kind of making it up as I go.”

Tommy Dickerson of Orange, Texas, rounds out the top five with a two-day total of 31 pounds, 12 ounces. 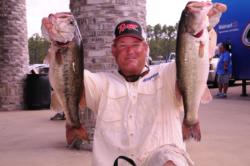 Rounding out the top-10 pros in the EverStart Series event on Sam Rayburn Reservoir after day two: 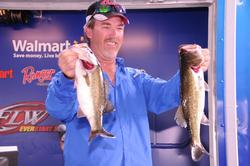 Dan Wilson of Pilot Point, Texas, is in second place with a two-day total of 16 pounds, 15 ounces.

Ralph Logan, Sr., of Magnolia, Texas, is in third place with a two-day total of 16 pounds, 14 ounces.

Kevin Burks of Kountze, Texas, is in fourth place with a two-day total of 16 pounds, 5 ounces.

Cary Walker of Nacogdoches, Texas, rounds out the top five with a two-day total of 15 pounds, 9 ounces.

Rounding out the top-10 co-anglers in the EverStart Series event on Sam Rayburn Reservoir after day two: