Skinner in control on Lake Havasu 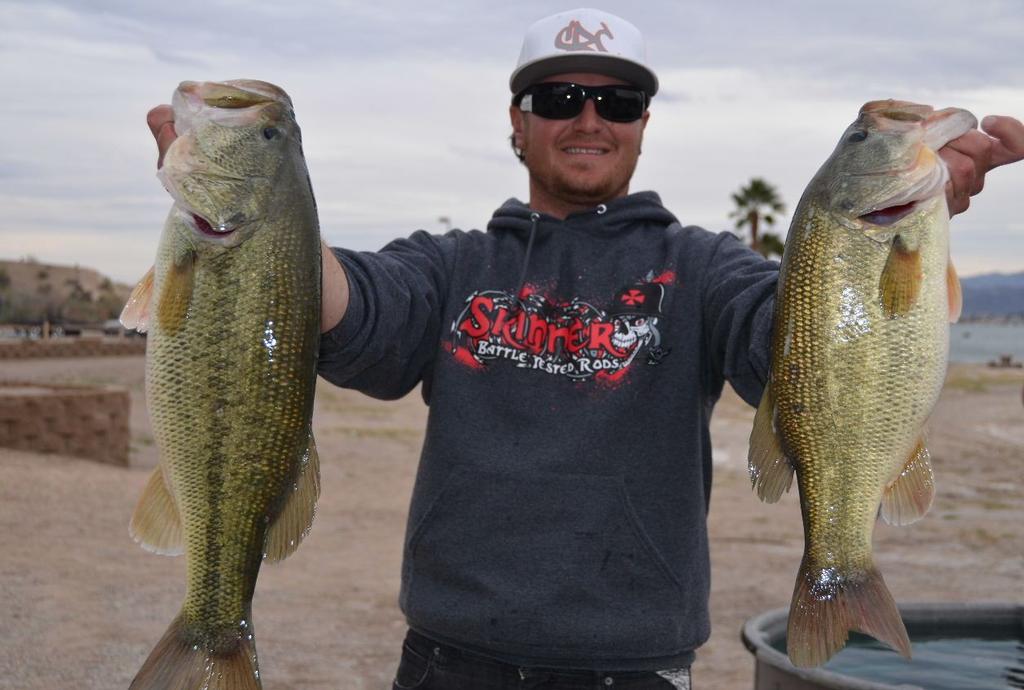 LAKE HAVASU CITY, Ariz. – While plenty of pros struggled with the blustery winds which peaked at 25 mph during Thursday’s opening round of competition, Billy Skinner of Lake Havasu City, Ariz., wasn’t one of them. Using his local knowledge to full advantage, Skinner outmuscled the rest of the Rayovac FLW Series Western Division field on Lake Havasu with a total catch of 21 pounds, 2 ounces to grab a slim, but noteworthy 9-ounce lead over his next closest rival.

However, despite his strong effort, Skinner acknowledged that the fishing was far from easy.

“Today was great but it’s still pretty tough out there,” said Skinner. “When you get this hard south wind it really shuts the fish down. But today I got lucky.”

Skinner said that today his five years of fishing experience on Lake Havasu really paid off.

“With a full field, this lake fishes really small,” he said. “I was basically fishing two different techniques and I found one little deal this morning that was really working so I stuck with it all day. I was only using one rod and really grinding it out. I was just trying to get five bites and I ended up with eight or 10 so I was happy.”

While Skinner didn’t want to go into great detail about his techniques or prime fishing areas, he did acknowledge that he targeted shallow fish with reaction baits in 5 to 10 feet of water.

“I was fishing manmade cages, weed beds and brush piles mostly,” he said.

With a cold front and sunny skies expected to move in, and a change in weather all but guaranteed for Friday’s competition, Skinner said that he was ready to adjust as necessary.

“If we get a calm sunny day tomorrow, it should really help me. It will give me more options,” he said. “But it’s a three-day tournament. You have to deal every day, take what the weather gives you and scratch it out. Realistically, I’m not even sure I have (two) days of fish left. So you really can’t relax here.” 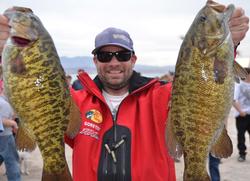 Heading into the Lake Havasu event, Ken Phillips of Antioch, Calif., was really looking forward to fishing one of his favorite tournaments – that was until he got here.

“When I first got here last Friday, I was sleeping in my truck when I heard this noise and decided to get up. It was around 4:30 a.m. But as I climbed out of my truck I wound up breaking my toe,” he said.

But the grief didn’t end there.

“I wound up getting sick the last two days so I haven’t even been on the water since Monday,” he said. “So I really wasn’t expecting much today. And because of everything that happened to me, I went out fishing with no pressure. I accepted the fact that I had a broken toe, had been sick for two days and really didn’t have much pre-fishing time. Realistically, I was already looking forward to the next (Rayovac FLW Series) event on the Cal Delta.”

But as fate would have it, Phillips wound up having a banner day on the water. Go figure.

“Man, it was pretty awesome today,” he said. “This morning, I didn’t even know if I was going to catch them at all. But other than my first stop today, everywhere I went I caught some big fish. I actually wished I could have saved more of them for later on.”

Phillips said that he caught all of his largemouth bass early in the morning and then culled his quarry with a number of smallmouth throughout the afternoon to net one of only three 20-plus-pound stringers in today’s competition.

Although he was light on specifics, Phillips said that he targeted bass with a full arsenal.

“I went to a few places where I found fish early in practice before I got sick,” he said. “I wound up catching fish on about five different techniques. Basically I was just throwing a variety of baits for them to look at.”

Clearly Phillips non-strategy tournament strategy worked out well as he seemingly put fish in the boat at every turn to record a total catch of 20 pounds, 9 ounces.

To underscore the kind of day Phillips had, toward the latter part of the day the California native pulled up on a spot in an effort to get his co-angler some more fish. Already happy with his five-fish total, Phillips wasn’t even thinking about trying to upgrade.

“So at about 3:45 p.m., I pull up at this spot with all of these boats around me, make two casts and catch a 5-pound smallmouth right in front of everyone,” he said. “I couldn’t believe it. So yeah, it was a great day.” 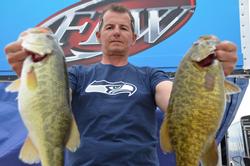 Recording the only other 20-pound-plus catch of the day was Gary Pinholster of Lake Havasu, Ariz.

“It was an awesome day,” Pinholster said of his 20-pound, 4-ounce catch. “The weather really changed today and there were a lot of boats so I was fortunate that I got the bites I got.”

Unlike most pros, Pinholster said the windy conditions actually worked to his advantage.

“With this many boats on the water, I think what really helped me was having this weather,” he said. “I think the wind really threw everyone else off their game. But I got bit all over the lake.”

The local pro said that he targeting prespawn fish with a variety of reaction baits to land his catch.

“I was catching them in 10 to 20 feet of water just outside of the spawning points – mainly on staging areas,” he said. “I used all reaction baits and did some habitat (cage) fishing as well.”

Pinholster said he was cautiously optimistic he could duplicate his efforts over the final two days of the tournament as well.

“If the fish cooperate tomorrow, we should be able to do this for a couple of more days,” he said. 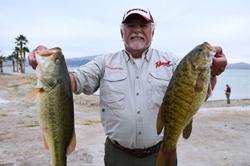 Using a total catch of 19 pounds, 7 ounces, Ed Arledge of Valley Center, Calif., found himself in fourth place when all was said and done.

“It was a great day. I just went fishing and caught seven keepers,” he said. “I had my limit by 10:15 a.m. and caught two more after that. So it went perfectly as planned.”

Arledge, who will turn 71 years old next Friday, said he didn’t mix things up too much during today’s competition.

“I stuck with two techniques all day long,” he said. “I caught some fish in about 6 to 12 feet of water and some in 23 feet. I don’t want to get into too many specifics but I will say that brush came into play.”

As for tomorrow, Arledge said he doesn’t foresee changing things up too much.

“I’m going with the same gameplan tomorrow,” he said. “I’m just going to cross my fingers that I can put it all together.” 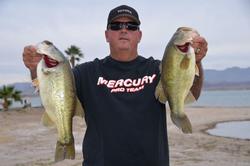 Clint Goodwin of Lake Havasu City, Ariz., nailed down fifth place after today’s competition with a catch of 18 pounds, 9 ounces.

“I’ve lived here for 24 years so I’ve fished this lake a lot,” said Goodwin. “I probably caught 20 keepers overall, had six over 3 pounds and one over 4 pounds and had five fish in the boat at 7:45 a.m. So today was a great day.”

Goodwin said one of the keys to his success was his understanding of the lake pressure and how to deal with it given the fact that the tournament was boasting a 152-boat field.

“I’m running a long, long way and fishing where there is a lot less boat traffic,” he said. “I spent a lot of time the last two weeks getting on some really good patterns – patterns that I knew would be away from other people. And today it paid off.”

Goodwin said that he’s fishing “a couple of different baits,” targeting a combination of tules and rocks in shallow water. 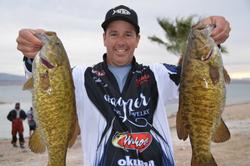 Bolstered by a catch of 15 pounds, Todd Kline of San Clemente, Calif., took over the top spot in the Co-angler Division after the opening round of competition on Lake Havasu.

“I’m really shocked at how well I did today given that the bite was so tough. I’m blessed,” he said. “We found some fish during practice so I knew that there were some good fish out there. I just kept my head down and it paid off. I only had five bites but I capitalized on every one of them.”

Kline said that he used a combination of jigs and reaction baits to land the majority of his catch.

“When the wind picked up, I threw reaction baits and when the wind died down a little bit, I threw the jig. But I fished it slow. And that was key. When you’re fishing as a co-angler you have to get into a groove and I was able to do that today.” 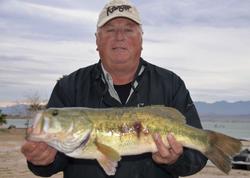 Steve Biechman of Redding, Calif., parlayed a total catch of 14 pounds, 13 ounces into a second-place finish in the Co-angler Division after Thursday’s opening round of competition.

“This is the best day I’ve ever had on this lake. Usually if I get one bite I’m ecstatic,” he said.

However, the day didn’t start as well as he’d hoped.

“I got my first bite and it got off,” he said. “I started thinking, `Here we go again.’ I finally get a bite and it gets off. But luckily, things got a lot better from there.”

Biechman said he landed all of his fish by about 8:30 a.m.

“But I didn’t get another bite after that,” he said. “I kept at it but I just wasn’t able to get anymore bites the rest of the day. But it was a good time.”

The California native said that he ultimately targeted bass with a combination of reaction baits, drop-shots, Shaky Heads and soft plastics.

Biechman also netted the Big Bass of the day award in the Co-angler Division after landing a 5-pound, 8-ounce bass. 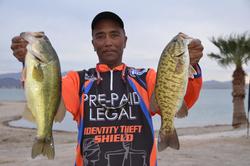 Meanwhile, Bradley W. Devett of Lake Havasu City, Ariz., rounded out the top-five co-anglers with a catch of 9 pounds, 6 ounces. 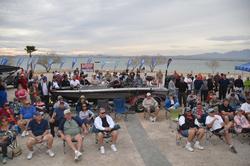