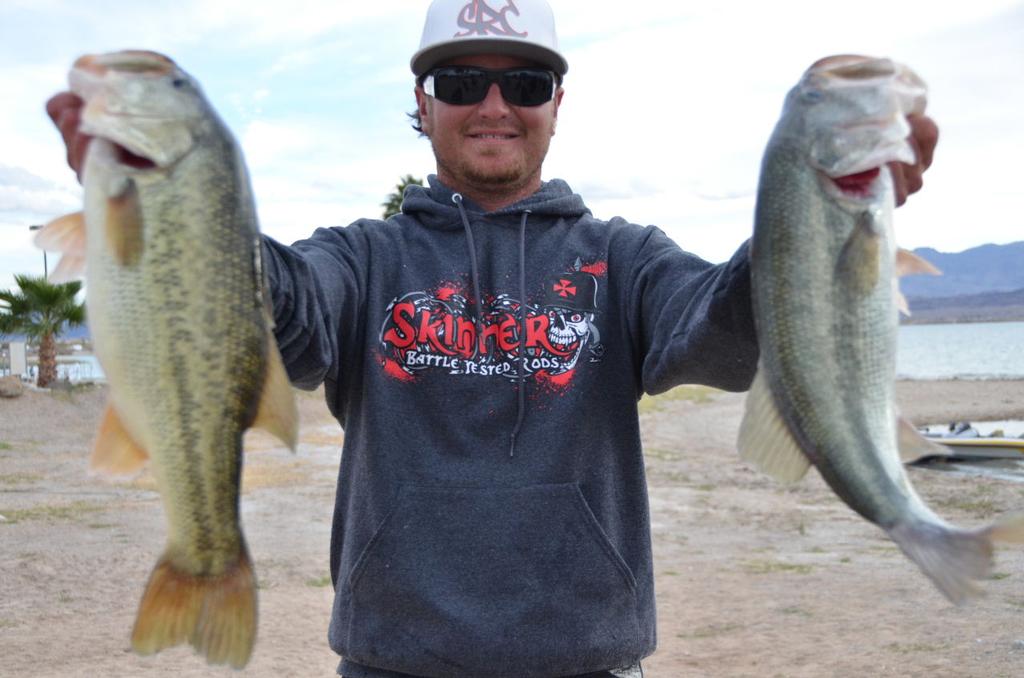 LAKE HAVASU CITY, Ariz. – When it comes to tournament fishing, anglers oftentimes refer to the local curse. The theory being that hometown anglers have a lot more pressure to succeed on their home waters, overthink strategy, wind up wasting time running to too many “prime” fishing locations and thus collapse under the weight of expectations when it comes to performing in front of friends and family.

Apparently, however, this premise does not apply to Billy Skinner of Lake Havasu City, Ariz.

As the only angler to record back-to-back, 20-plus-pound stringers this entire week, Skinner exerted his muscle once again on the entire field, recording a total two-day catch of 41 pounds, 6 ounces to net a healthy 4-pound lead over his next closest competitor.

Despite fishing in extremely windy conditions for the second day in a row, Skinner showed the field just how dominating his tactical grasp of Lake Havasu really is.

“I couldn’t be any happier,” said the Arizona native. “It was tough out there again today so I’m really glad I was able to catch what I caught.”

Although Skinner made it look easy, he said today’s outing was even more difficult than Thursday’s opening round of competition where anglers faced wind gusts ranging from 15 to 25 mph all day.

“I thought we’re going to have a lot better weather today and I was wrong,” he said. “It was a little more of a grind than I wanted it to be. I didn’t get to run around as much as I wanted to. And I had to press my fish a little harder than I wanted to today as well.”

After realizing the weather wasn’t going to be exactly what he’d expected, Skinner decided to stick with the same gameplan that brought him atop the leaderboard in yesterday’s competition – a decision that ultimately proved to be highly effective.

“I wound up doing pretty much the same thing as yesterday,” said Skinner, who landed a total catch of 20 pounds, 4 ounce in today’s competition. “Today I made camp in one area, made about a million casts, got the five bites I wanted and caught seven fish total. I’m really just fishing for quality bites – and that’s it.”

Skinner said that he isn’t running very far and keeping his arsenal as slimmed down as possible.

“My main area is fairly close to the marina and I only used two rods today,” he said. “I’m mostly power fishing with reaction baits, targeting grass and natural wood along with some (manmade) cages.”

As the number-one qualifier heading into Saturday’s finals, Skinner doesn’t see himself changing things up too much.

Borofka rockets up the leaderboard 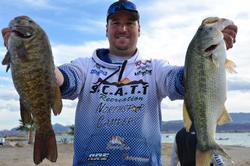 On the strength of a 20-pound, 7-ounce catch (the largest stringer caught in the Pro Division during Friday’s competition), Jason Borofka of Salinas, Calif., leapfrogged from 15th place overall to second after netting a two-day total weight of 37 pounds, 6 ounces.

However, despite his stellar efforts on the water today, Borofka lamented the fact that he fished too conservatively in Thursday’s opening round.

“Yesterday I laid off my fish a little bit because I thought it was only going to take around 15 pounds to get into the top 10,” he said. “Coming into this tournament I did some research and figured out that most of the guys who win here really manage their fish. And that’s what I tried to do. So I held up yesterday even though I shouldn’t have. I just fished too conservatively yesterday and I didn’t want to make that same mistake again.”

Borofka said that his tactics include covering as much water as possible in an effort to battle the serious fishing pressure that Lake Havasu has been facing this week with a 152-boat field.

“I fished a little bit of new water today but basically I’m running and gunning. I’m not trying to stay in one spot for too long because there’s so much pressure. If the fish bite, I’ll stay. But if they don’t, I’ll move on,” he said. “I’m pretty much running points and fishing shallow stuff – in about 12 feet of water or less.”

Borofka said that he has been concentrating on staging area primarily although he has found success in myriad parts of the lake.

So how does it feel to climb all the way into second place after miscalculating on day one?

“I’m really happy,” he said. “This is my fourth FLW event on this lake and it’s the best I’ve done so far. It’s also the first tournament of the year for me so I’m pretty happy right now.” 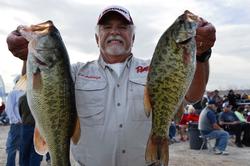 Although Ed Arledge of Valley Center, Calif., will be celebrating his 71st birthday next Friday, you’d never know it by the way he’s schooling the younger generation of Lake Havasu anglers this week. Bolstered by a total, two-day catch of 36 pounds, Arledge moved up to third place overall and easily qualified for the finals.

And he did it by being a loner.

“I’m fishing in the middle of the lake and there isn’t a boat around me for 2 miles,” he said. “I’m fishing an old river channel with trees on either side of the channel. The older guys know that we used to fish that area all the time but not many people realize that there are still some pretty good fish there. The bites are few and far between but if you’re patient you can really have some success.”

Arledge, who caught a mixed bag of largemouth and smallmouth for the second day in a row, said that he’s been targeting bass with jigging spoons in anywhere from 25 to 29 feet of water.

“It went really well today,” he said. “I caught four nice fish and one small one. If I had been able to cull out that last fish I would have had 18 pounds today. But I came back with 16 pounds so I really can’t complain.”

Not surprisingly, Arledge doesn’t have too many plans to shake things up in Saturday’s finals.

“So what am I going to do tomorrow? The same exact thing … absolutely.” 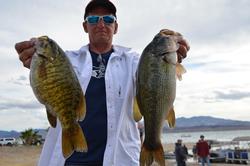 Although Gary Pinholster of Lake Havasu, Ariz., didn’t have nearly as good of a day on the water as Thursday, he still managed a two-day total catch of 35 pounds, 3 ounces which was good enough for the fourth qualifying position heading into the finals.

“I was really lucky I got a limit today,” said Pinholster, who has been sporting a Seattle Seahawks t-shirt all tournament in anticipation of the other major sporting event this week. “I had some success this morning but as soon as that wind came out of the north, the bite really shut down.”

Pinholster said that he continued to target pre-spawn fish in staging areas in about 10 to 20 feet of water using a combination of reaction baits. 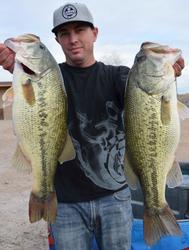 Kevin Hugo of Chino, Calif., grabbed fifth place overall with a total, two-day catch of 34 pounds, 14 ounces. Hugo had been in 13th place after yesterday’s competition.

Rounding out the top-10 pro qualifiers: 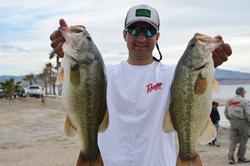 Heading into Friday’s competition, Co-angler Blaine Christiansen of San Jose, Calif, was sitting in a tie for 30th place with the knowledge that if he didn’t make something happen on the water today he’d be going home with the rest of the 142 non-qualifiers. Well, he did make something happen, and then some.

On the strength of Friday’s catch of 21 pounds, 7 ounces, the largest stringer caught in the entire tournament in either division, Christiansen not only shot into the overall lead in the Co-angler Division but also provided himself with a nearly 3 1/2-pound cushion over his next closest rival.

“It was an awesome day,” he said. “I started catching fish right off the bat and was very consistent for the rest of the day. I had a great morning bite – I probably had my limit by around 7:40 a.m. – so that was pretty relieving. The bite slowed down later in the day so you had to really wait the fish out but I was able to cull consistently throughout the day.”

Christiansen said he targeted fish with a combination of reaction baits but didn’t target any one specific area or set of cover.

“My fish were coming from different depths,” said Christiansen, who has amassed a two-day total of 27 pounds. “They were mostly staging fish. I think the fish I caught just happened to be grouped together in certain areas.”

As for tomorrow, Christiansen said he has no idea what to expect.

“Everyone’s doing so many different things that it’s hard to say what I’m going to be doing tomorrow.”

The one thing that is clear is that unlike plenty of other anglers, Christiansen will get to go fishing for one more day.

“Yeah, it’s pretty phenomenal,” he said. `It was just a really good day.”

Christiansen also landed the day’s big bass award in the Co-angler Division after netting a bass weighing in at 5 pounds, 10 ounces. 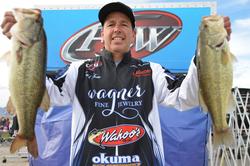 Although Todd Kline of San Clemente, Calif., lost his overall lead, he still managed to qualify for the finals in second place with a two-day total catch of 23 pounds, 10 ounces.

“I didn’t get as many bites as yesterday,” he said. “I wound up fishing a whole new area – we fished the river – and I really had to adjust. I basically cut everything off that I’d tied on yesterday and went with a completely different approach. Today, it was back to the drawing board for me.”

Kline said that he employed a crankbait in the morning and then converted over to a Revenge Jig later in the day.

“My goal today was to catch at least 5 pounds because I knew if I did that I’d probably make the cut,” he said. “I wound up catching almost 9 pounds so I’m happy.” 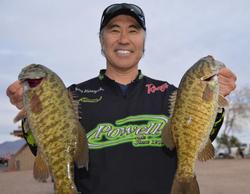 The omnipresent smile of Gary Haraguchi was once again in full force today after the Redding, Calif., native parlayed a total, two-day catch of 21 pounds into a third-place qualifying finish heading into Saturday’s finals.

“It feels great,” said Haraguchi. “It was really tough out there and totally different from yesterday. I was just hoping for five bites and I really struggled out there. But I wound up catching five fish so I’m happy.”

Haraguchi said that he targeted banks with reaction baits to land the majority of his catch.

“We covered a lot of water and didn’t get many bites but I got enough,” he said. `I’m going to go out there tomorrow, have some fun and hopefully good things will happen.” 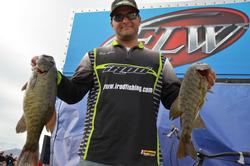 After a nearly disastrous day-one haul of only 3 pounds, 14 ounces, Daniel Leue of Colusa, Calif., leapfrogged from 54th place to fourth place overall after netting a dominating 16-pound, 14-ounce catch on Friday.

“It feels good,” said Leue of today’s effort. “It was a lot better day than yesterday. Yesterday was definitely the day I’d like to have back.”

Leue, who concentrated his efforts Friday by fishing primary and secondary points, couldn’t have asked for too much of a better outcome in today’s competition. 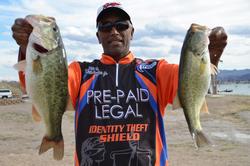 Rounding out the top-10 co-angler qualifiers: