Skinner runs away with tourney title on Lake Havasu 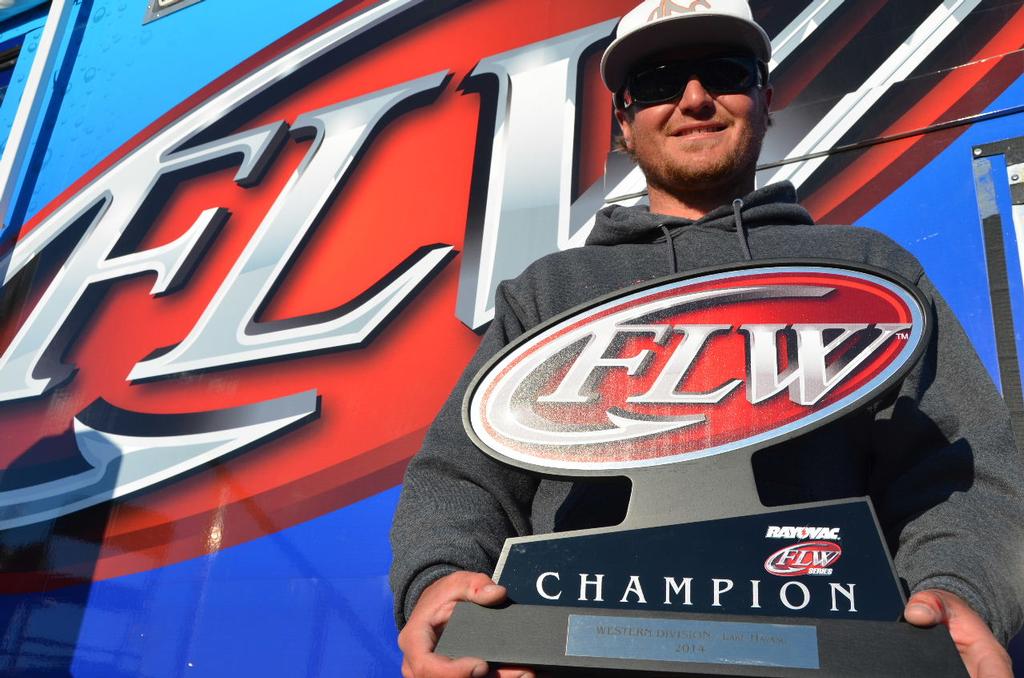 LAKE HAVASU CITY, Ariz. – In the end, the pro contest on Lake Havasu turned out to be really no contest at all. Despite brutally windy conditions for the third day in a row, local pro Billy Skinner of Lake Havasu City, Ariz., managed to keep the rest of the field at bay, recording a final-day catch of 17 pounds, 15 ounces to bring his grand total to 59 pounds, 5 ounces. The result was pretty much a foregone conclusion as Skinner demolished the competition, winning by an astonishing 12-pound margin over his next closest competitor.

For Skinner – who walked away with a brand new, fully rigged Ranger Z518C as well as $40,000 in cash – the tournament represented nothing short of the high-water mark of his young career.

“This is crazy. It’s a dream come true. I don’t think this is going to set in for awhile,” said Skinner. “I’ve won some boats before and won some team tournaments, but this is the peak of my career right now. It’s just amazing.”

However, although Skinner looked like he didn’t break a sweat all week during his magically run to the title, he acknowledged that fishing Lake Havasu was anything but easy. With stiff winds coming out of the south on day one, even stronger winds emanating from the north on Friday and absolutely brutal westerly winds clocking in at more than 30 mph during the finals, Skinner earned every cent of his payday. 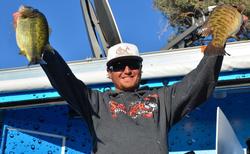 “Dude, it was brutal out there,” he said. “There were wind gusts anywhere from 30 to 35 mph today so it was tough. It was insanely slow fishing for me today until about 1:30 p.m. Then I got on a pot of fish and caught them the rest of the afternoon. That afternoon bite salvaged my day. I really can’t believe I had five fish today – it was that bad out there. I also missed six fish this morning and I really thought that was going to be the nail in the coffin.”

Targeting fish with a ChatterBait all week long, Skinner made his way to his prime fishing area early in the morning. It was a “main spawning bay with baitfish” and it was the place that had rewarded him all week. But today, with the westerly winds, his bite shut down.

“The fish were basically coming to me every day but I only caught two small fish there so my area really failed me today,” he said. “So at 1:30 p.m., I left and started fishing manmade structure and weed beds.”

In the end, Skinner’s perseverance paid off as he netted the largest stringer of the day in either division.

“It was an exhausting week but it was a lot of fun,” he said. 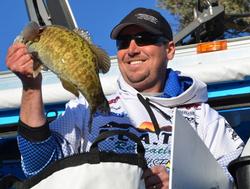 Although Jason Borofka of Salinas, Calif., hadn’t fished Lake Havasu in seven years, you never would have known it by the performance he turned in this week. While Skinner understandably stole most of the headlines, Borofka quietly had one heck of a tournament, finishing in second place overall with a total, three-day catch of 47 pounds, 5 ounces.

“I’m really happy with the way I fished; it’s just been an unbelievable event,” he said. “When I came here, I really didn’t know what kind of fish I was on. I fished a little conservatively on the first day but pretty much everything worked out for me this week. I had a great time and made all of the right decisions.”

Like the majority of the final-day field, Borofka said the fishing conditions were as difficult as they come.

“Oh man, I think I’m going to have to lay down because my back is pretty messed up. I’m so cold right now,” he said. “I prayed for wind today but not a hurricane. It was definitely brutal out there.”

Borofka said that he spent most of his time fishing flats with “big breaks.” He said he used a homemade Alabama rig with a two-bait attachment – what he and his friends nicknamed the “G-rig” – to land approximately 80 percent of his catch. In addition, Borofka augmented his arsenal with a Johnny C’s California Reservoir Lures flipping jig.

Although he couldn’t pull out the title in the end, Borofka said he had an amazing week of fishing.

“Like I said, it’s been 7 years since I’ve been here so I’m really happy with the way I fished,” he said. “Overall, I feel great about my week. It’s the first tournament of the year for me so it’s a great start.”

Fuqua nets third place, gets his mojo back 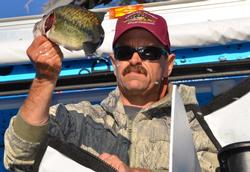 John Fuqua of Oxnard, Calif., could have easily been excused had he turned in a terrible performance this week. Back in October, Fuqua suffered a tragic loss when his house caught on fire. The loss was devastating. As a result, he didn’t really have any real opportunities to go fishing given the fact that he had to deal with the personal matter of literally getting his house back in order.

However, somehow Fuqua managed to put all of his bad luck aside this week and turn in one of the more noble performances of his career. Using a total catch of 46 pounds, 8 ounces, Fuqua grabbed third place overall and took home a check for $12,000. While that amount won’t cover his house fire and the losses – both property and personal – it was at least a start.

“I had that house fire back in October and I wasn’t even going to come and fish this tournament,” he said. “But my wife signed me up and I’m glad she did.”

Things, however, did not go smoothly at the very start. Fuqua acknowledged that he had a brutal practice and wasn’t sure things were going to get much brighter once the actual event commenced.

“Considering I caught two fish in all of practice, I’m really happy with the way things turned out,” he said. “I wound up fishing all new water at the start of the tournament. Basically I just came here and went fishing.”

While most of the competitors struggled in the blustery conditions today, Fuqua made a strategic decision to fish the back of an island that was at least somewhat sheltered. As it turned out, it was a wise choice.

“I fished back around the island and targeted rock with a break on the bank line. Most of my fish were shoreline fish today,” he said. “I used a Basstrix hollow belly swimbait to catch most of my fish. But the wind was key for me. The banks I fished had to have some wind on it.”

Unlike many final-day competitors, Fuqua said today was his best day of fishing.

Fuqua now boasts one win (on Lake Roosevelt in 2013) and a third-place finish (today) in back-to-back Rayovac FLW Series events. 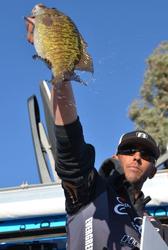 On the strength of a total catch of 46 pounds, 5 ounces, Shaun Bailey of Lake Havasu City, Ariz., netted fourth place overall – despite the fact that the wind completed decimated his gameplan coming into the finals.

“It was just an average day on Lake Havasu,” joked Bailey with regard to the brutally windy conditions today. “Today I had to abandon my gameplan and just go pre-fishing. I ran all new water and did the best I could.”

Bailey said that he targeted bass with a combination of Evergreen baits.

“I caught most of my fish this week on an Evergreen vibration bait by ripping it off the bottom pretty hard,” he said. “But it was definitely tough out there today. You really had to take it slow and easy. I only had four fish today and I had a smallmouth on the line that really would have helped. But it jumped like 3 or 4 feet in the air and came off.”

Overall though, Bailey said he had few complaints. 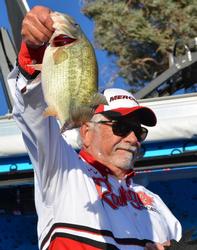 Like many pros during the finals, the wind completely sabotaged Ed Arledge’s prime fishing area. After spending the entire week fishing deep water in the middle of the lake, today’s dangerous wind gusts made his main fishing spot virtually unfishable. So, the resident of Valley Center, Calif., was forced to adapt on the fly.

“Today I totally got blown off of my spot. There was just no way I could fish in the middle of the lake with 35 mph wind gusts out there,” he said. “I wound up having to change things up. I still fished deep – about 29 feet – but that was about the only thing I could do.”

Ed Arledge said he targeted bass today with a combination of spoons en route to a total, three-day catch of 42 pounds, 15 ounces.

“I’m cold and tired right now,” said Arledge, who will celebrate his 71st birthday next Friday. “But I had a fantastic week overall. Anytime you can make the top-10, it’s a good week.”

In the end, Arledge walked away with $9,000 in winnings for his efforts. 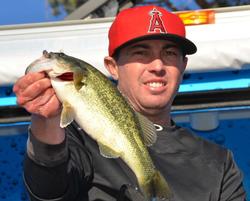 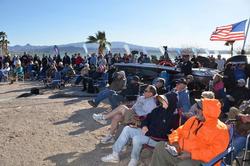