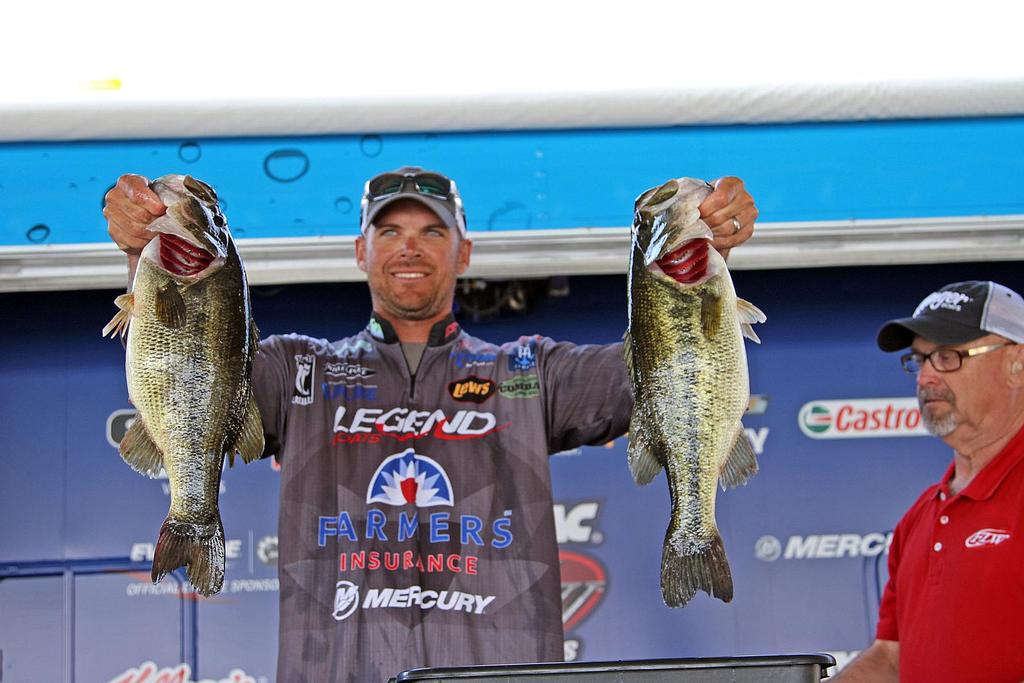 MANY, La. – Apparently, Toledo Bend’s largemouth bass don’t read fishing magazines, because if they did, they’d know that on warm March days with lots of sun and not a lot of wind they’re supposed to be heavy into the bedding routine and snapping at anything that encroaches their space. That wasn’t exactly the case for day one the Rayovac FLW Series Texas Division tournament.

In fairness, the fish had legitimate beefs with the weather and it’s entirely possible that the ill effects of cold snaps earlier in the week were still giving them a bad hair day. Moreover, when runoff from recent rains turn creeks and spawning pockets to chocolate milk, such habitat calamity can really mess with the program.

Also in the interest of accuracy, many anglers did indeed catch quality fish off beds. Four anglers broke 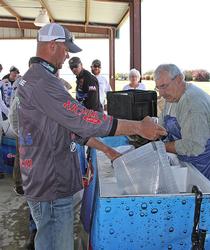 20 pounds. But when this lake is “on,” 20-plus should reach at least down to tenth and you ought to see more anglers hauling out trophy size fish for the Big Bass prize. The day saw a 10-pounder, but no others came within 2 pounds of that mark.

For pro leader Todd Castledine, day-one success required a frustrating bit of adjustment. His limit of 24 pounds, 4 ounces gave him a lead of 2-4 over second-place pro Ronnie Wagner, but it was no easy course.

“Everything I did in practice, I just chunked it all about 10:30 when I had nothing and I just went to all new stuff,” he said. “I didn’t go to any of the places I went in practice.”

Pocket hopping – bouncing from one backwater spawning area to another all day – is the general deal this time of year, but Castledine said the lake was much stingier than he would have expected.

“I was just so mad at what was going on. I just said `What does it matter now? I can’t lose now (by finding new spots.)” 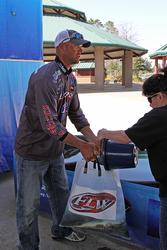 Having seen how the fish behaved in practice, Castledine said he wasn’t surprised by their unsettled dispositions. Nevertheless, exasperation was a common sentiment throughout the tournament field.

“I’ve been telling everyone this would happen,” Castledine said. “Everyone’s complaining about the same stuff – fish going, fish leaving. I think all the (cold) weather from earlier in the year has them messed up. I think they’re trying to spawn in like 6 hours and then leave. You just can’t rely on anything right now.”

“Three of my fish were roamers,” he said. “I just stayed with them and caught them. My biggest fish, I stuck her and lost her and then came back an hour later and caught her.”

Although he didn’t want to discuss his geography, Castledine said he was enjoying the rare gift of solitude.

“Nobody’s around me right now,” he said. “I’m kind of able to see on the bank what I might need, but not really. One of the areas I caught them in, I just went in there because it was calm. So, as of right now, tomorrow I’m just to go to what looks good and if it’s calm, I’m going to hit it.”

Wagner winds up in second

Hailing from Houston, Texas, Wagner sacked up an even 22 pounds to take second place. Like 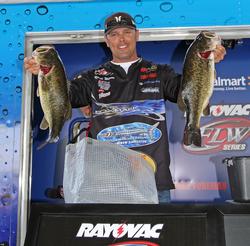 Castledine, he also had to go looking after the fish he expected to catch weren’t cooperating.

“I covered a lot of new water today,” Wagner said. “I found some fish in practice, but for the most part, it was finding new fish. I think they’re coming in, but they’re leaving as fast as they’re coming.”

Wagner said he sight fished the mid-lake region early and late in the day, but he also caught some of his fish in the lake’s south end, where abundant grass leads to greater water clarity.

“I was looking for clear water with a little dinginess in it,” he said. “You have to have a little bit of color in it so the fish will lay back where they can’t see you before you see them.”

“I had a lot of problems to day with battery issues and I didn’t get to cover the water that I wanted to,” he said. “Maybe tomorrow I’ll have more time.” 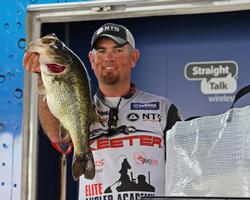 In third place, Clark Reehm followed the prevailing path of altered game plans, but his differed in that he had initially intended to target prespawn fish with an Alabama rig. Switching directions was a good move, as he caught 21-8 and took third place.

“I had to abandon all my (prespawn) stuff and go look at them,” Reehm said. “All of my fish I found today, except for one.”

“I was actually looking at a bigger fish than the biggest one I weighed,” he explained. “The (initial) big one wouldn’t lock on (to the bed) and I just happened to look over and saw that big one that I caught – it was like a 7-pounder.

“Also, my three biggest fish were all 5-minute fish. I don’t get gift fish like that very often when I’m bed fishing.”

“I have about 10 different baits I’m rotating through,” he said. “Every one of those fish, I’d get them fired up on one and then I’d flip another bait or another color in there and they’d bite it instantly.”

Duff has the stuff for fourth

Fourth-place pro Lance Duff, of Liberty, Texas was the fourth pro to break 20 pounds. His 20-9 put him 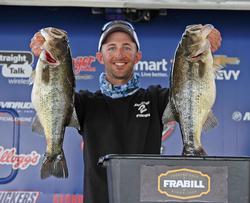 in fourth place, but only after shifting his focus.

“I had a strong sight-fishing pattern, but today, for whatever reason, it fell through and they all pulled off,” Duff said. “I had been catching my fish in the backs of creeks, but they’re so (muddy) from the recent rains. I didn’t have my first fish in the boat until 9:45 and it was a 5-pounder.”

Fishing the lake’s south end, Duff said he decided to ditch the bed-fishing deal in favor of fishing fast and covering water with a Rat-L-Trap. Later in the morning, he tried working a swimbait down the middle of canals and that met with strong response.

“The habitat I was catching my fish in was about 7 feet of water with grass I could see and a break line,” Duff explained. “I was just paralleling the edge of that line and just ticking the grass with that trap.

“The swimbait definitely produced the bigger fish. I have one that’s not made anymore. I call it “The Donkey” because it always catches big fish.” 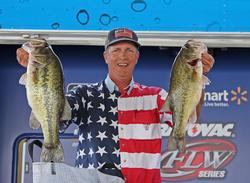 Noting that he and his pro partner ran approximately 40 miles to the lake’s south end, Barnett said he knew there had been a lot of bass in the area they fished. He caught his fish on moving baits, but with creeping presentations.

“I just fished slowly and deliberately out the back of the boat,” Barnett said. “I just took my time. I didn’t feel anything bite until they just loaded up.”

In second place, John Martin, of Buna, Texas had 13-13, while third-place Denny Swartz, of Broussard, La. caught 12-3. Harry Holloway, of Dayton, Texas, took fourth with 12-1, as Ryan Bailey, of Humble, Texas and Stephen Francis, of Brookeland, Texas tied for fifth with 11-9.