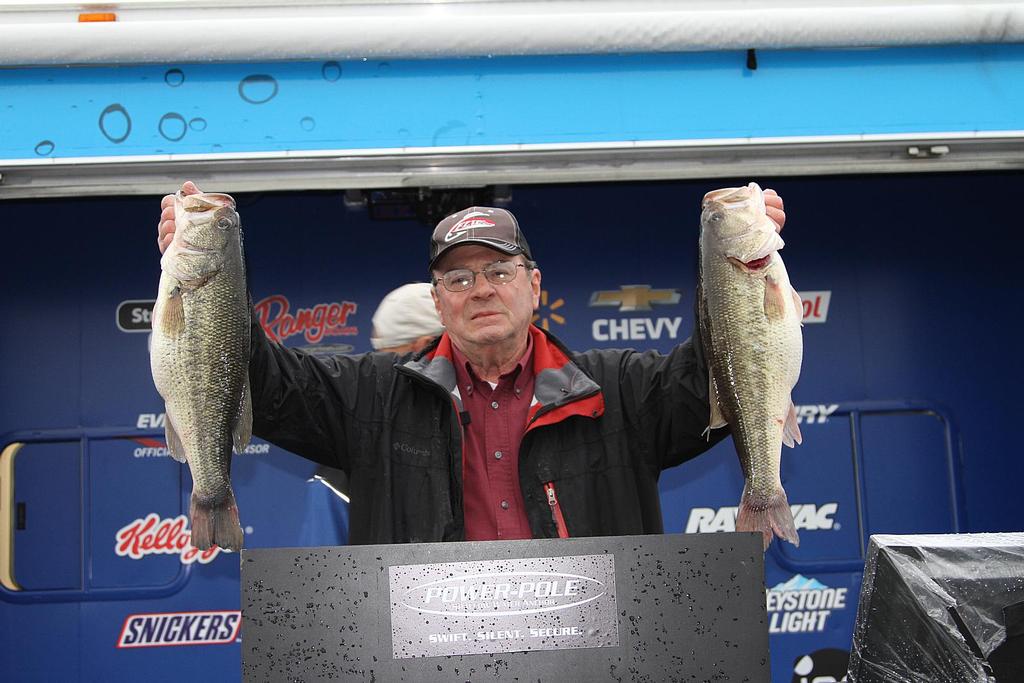 GROVE, Ok. – He caught `em far and he caught `em close and in the process, Sam Rosefsky earned the top spot for day one the Rayovac FLW Series Central Division tournament.

On a day marked with dreary weather – cloudy, windy, showers soaking the last hour of weigh-ins – Rosefsky found plenty to smile about. His 23-pound, 1-ounce bag topped the opening round’s standings and gave him a 3-pound lead over second-place pro Wesley Strader.

Hailing from Morris, Ill., Rosefsky said he spent most of his day fishing down near the Pensacola 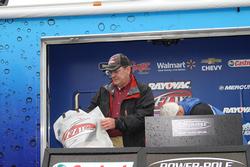 Dam, where he sacked up most of his weight. On the way back, he stopped on a spot just a couple of miles from the check-in site and culled up with another quality fish.

With Rosefsky and Strader the only competitors to break 20 pounds, it was clear that Grand Lake’s spring spawning slugfest has yet to materialize. After an exceptionally cold Oklahoma winter, the lake’s a little behind schedule due to sustained low water temperatures.

However, a warming trend that began on Tuesday has brought the lake closer to where it needs to be. Rosefsky said the fish in his areas seemed to be moving forward with their prespawn positioning. 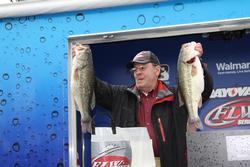 “That definitely helped today – they turned on,” Rosefsky said. “I prefished for six days and I had two bites. Today, they started moving back into shallow water.”

Rosefsky said that a key element to finding active fish was water clarity.

“Some areas were a little murky and those were the better areas,” he noted.

As for baits, Rosefsky relied on a spinnerbait, jig and worm. The spinnerbait got most of the casts in areas of dirtier water, while the jig and worm split the duty in clear water.

Rosefsky said he targeted traditional prespawn staging areas such as clay banks with gravel edges. He chose leeward areas to keep out of the wind.

“We fished about 10 different spots today,” Rosefsky said. “I didn’t give (each spot) any kind of time limit; if I caught a fish, I’d stay longer.”

Strader switches up for second

In the parking lot prior to launching, Strader expressed concern over the fact that he’d had the most 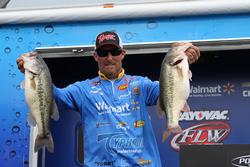 difficult practice of his career. Well, he may have started his day somewhat confounded by Grand’s inconsistency, but he ended the day with a new-found confidence after sacking up a second-place bag weighing 20 pounds, 1 ounce.

“I had just about what I weighed before 8 o’clock this morning and I went practicing the rest of the day, trying to look for some other stuff,” Strader said. “I had two other really good bites, which I didn’t (catch), but I think I’ve figured out a little something. I’m not getting a lot of bites but I made an adjustment and I caught (quality fish).

Strader started the day by throwing his signature series Stan Sloan Zorro Bait Company spinnerbait, but non-committal response he was getting told him he needed to make a change.

“They were bumping it, they wouldn’t eat it,” he said. “I said `Something’s not right,’ I made an adjustment and that was all the difference in the world. They started eating it.”

Strader reports a bonus moment from day one: “I pulled into a spot and I said `That looks like a buzzbait spot.’ I tied on a buzzbait and caught a 4-pound, 2-ounce fish on my second cast.”

Fishing “really close by,” Strader said that he also got dialed in on a very specific type of habitat.

“It was a real specific deal and when I found it, I got bit on it,” he said. 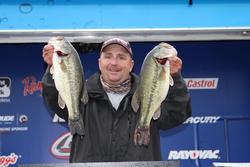 Florida pro Koby Kreiger has suffered from chronic back pain for many years, but this week, he arrived in Grove with debilitating discomfort that he feared might keep him from competing. Fortunately, a local chiropractor was able to get him back into shape and Kreiger sacked up a third-place bag that weighed 19-7.

Acknowledging the benefits of warming weather, Kreiger noted another meteorological consideration: “I think today’s wind helped more than anything. When it was slick calm, I sort of struggled and I think that’s what it’s supposed to be like tomorrow. The fish that bite on days like this are liars. Tomorrow will be the true test of what happens.”

Kreiger said he fished a mix of swimbaits, homemade crankbaits and other moving baits. After a slow morning, his bite picked up around 10 a.m. and continued until he had to return for check-in.

“I was just trying to find spots with wind,” Kreiger said. “Sometimes, it would be a flat tapering bank and sometimes it would be a sheer bluff. I just went fishing and hopefully, I can do that again tomorrow.” 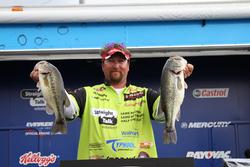 “I was fishing moving baits and when I do that, I use a regular graphite rod,” he said. “They weren’t eating it so I switched to a softer cranking rod and that made all the difference because I could them load up. I caught everything that bit after that.”

Kenney said he caught a keeper on his third cast and enjoyed steady action throughout much of the day. 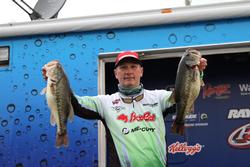 Sammy Burks, of Joplin, Mo., weighed a limit catch of 18-10 and finished day one in fifth place. Cranking was his primary technique, but Burks said he put a little different twist on the standard deal. He called it “finesse cranking” and while he opted not to disclose any details, he said it was a presentation that allowed him to appeal to fish that have yet to turn on.

“We’ve had a long, hard winter and the fish are still really sluggish,” Burks said. “They’re not chasing baits. You have to be convinced that the fish are there and you have to finesse them.

“You also have to slow down. I worked two spots today.”

Dany Danhausen, of Kankakee, Ill. topped the co-angler division with a limit catch of 16-6. After a tough 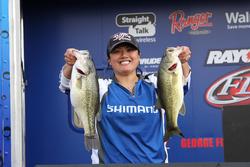 practice, she was delighted to find abundant opportunity throughout the day.

“My partner knew where to go and we were on fish the whole time,” she said.

Danhausen noted that she caught a lot of her fish while flipping plastics, with two undisclosed baits accounting for most of her productivity. She said her bites came from a variety of habitats.

The key to her success: “Just keeping my bait in the water and fishing hard.” 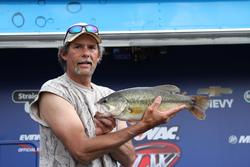