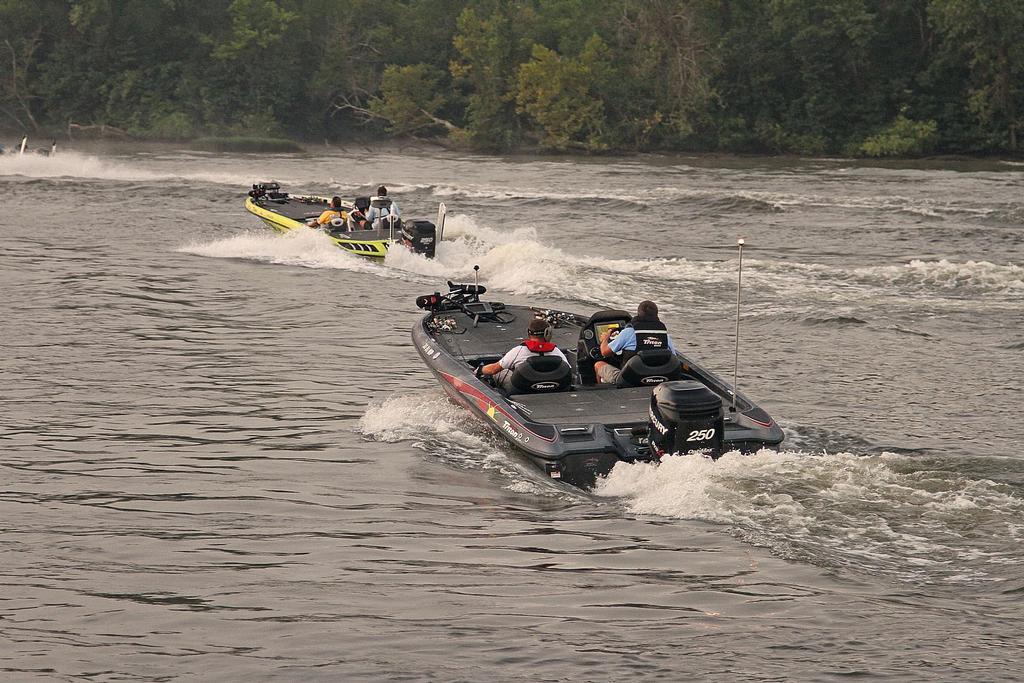 With high hopes, anglers head toward a high tide on day one on the James River. Photo by David A. Brown.
August 21, 2014 • David A. Brown • Toyota Series

RICHMOND, Va. – On tidal fisheries like the James River, optimism and opportunity are inextricably linked to water level. For anglers competing in the Rayovac FLW Series Northern Division, today’s tide schedule will present a brief period of opportunity, followed by a long grind the rest of the day.

The field will likely see an even split between the James River and its major tributary, the Chickahominy River (aka Chick), about 40 miles from takeoff. Both offer lots of habitat options, the Chick has more grass and greater numbers of quality fish. On the flipside, competition for spots will tend to be greater.

Bryan Schmitt, the Maryland pro who has bagged multiple wins on another Northern Division tidal fishery – the 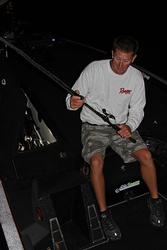 Potomac River – said this week’s tide schedule is not what he prefers. (The James River event was rescheduled after extreme high water postponed the original event.)

“It’s a little bit stronger current than the Potomac so you have a shorter window of opportunity,” Schmitt said of today’s schedule, which finds an incoming tide from about mid-morning through check-in time. “It’s all about the low, slack water, which we might not have much of today. Once the tide starts rising, it’ll be junk fishing and covering water.”

Rising water not only gives the fish more areas in which to roam, but the strong current associated with the rise tends to curtail feeding.

“I don’t think the fish want to spend their time swimming into the current, they want something out of the way,” Schmitt said. “When the tide gets low, it positions fish. Anything that looks like it should have a fish on it has one.

“When the tides running hard, I don’t think the fish are as likely to come out and strike something.” 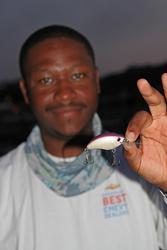 On the upside, Schmitt said that as the week’s tides advance, that crucial morning window will lengthen, so Saturday’s final-round field will have the greatest opportunity. Schmitt said he thinks Senkos, chatterbaits, buzzbaits and frogs will produce in the Chick, while crankbaits and shaky heads will well on the James.

TBF National Champion Mark Daniels calls another tidal fishery, the California Delta, his home waters so he’s well-accustomed to fishing fluctuating water levels. The James River habitat, he said, is significantly different than that of the Golden State’s massive central valley drainage, but the principles remain the same.

“The incoming tide, which we’ll face all day today, is going to be the most difficult tide,” he said. “The low tide tends to bring fish out of cover and makes them more accessible to anglers; but with that water coming in, there’s so much cover for them to go for miles sometimes, that makes it a lot more challenging.

“I think that finding those hard banks where even on the higher tides you can get your bait to that bank will be important. You can put your bait right in the fish’s face when they can push way back into lily pad field or a swamp.”

Virginia pro Brandon Stapleton will start on the James, but also has spots at the Chick. His 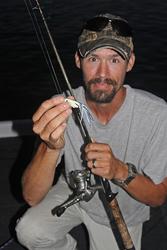 main deal is a small Spro frog that he’ll fish on a 5 ½-foot spinning rod with 10-pound braid.

“It’s all about precise casts,” Stapleton said. “You have to lay it right on a specific pad and this short spinning rod allows me to make those casts.”

Stapleton said he has mapped out his day with a game plan he believes will keep him in contention.

“I have one spot about 8 miles away that it seems nobody ever fishes,” he said. “I caught about 14 pounds there in an hour Monday and last year, I finished third in a BFL event in that spot. The spot just shows up as a mud flat on the chart, but as soon as you get up to the marsh bank, there’s 2 feet of water and the fish just cruise up and down that zone.

“I have another spot where I caught about 80 fish on Sunday. There’s just tons of fish, but they’re not big. And then I have another spot right at the mouth of the Chick that has a 2-pound average. The plan is to try to get the early bite on that first spot and get to 10-pounds. If I don’t have 10 pounds, I’m going to go into that second spot and get a limit.” 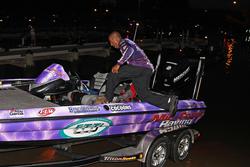 Maine pro Troy Garrison had a strong practice during which he had five to six big bites a day – all on a Snagproof Ish’s PHAT Frog. Garrison said the spatterdock fields hold the best opportunity and he intends to fully exploit it.

“I’m going right to that spot and I’ll probably stay there all day,” Garrison said.

One benefit of rising water is decreasing navigational concerns. Falling water brings boat hulls and props closer to shallow hazards, while rising tides allow a safer separation. Similarly, rising water eliminates the potential trap of entering a backwater area, only to find that falling water has closed the exit. 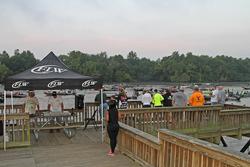 Richmond, Va., at 6:30 a.m. each day. Weigh-ins will be held daily at the launch site beginning at 2:30 p.m. Takeoffs and weigh-ins are free and open to the public. 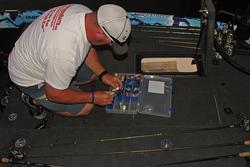 For complete details and updated information visit FLWOutdoors.com. For regular updates, photos, tournament news and more, follow the Rayovac FLW Series on Facebook at Facebook.com/FLWFishing and on Twitter at Twitter.com/FLWFishing. 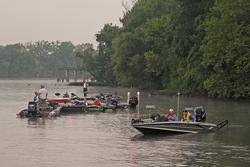