LA CROSSE, Wis. – Call it redemption for local stick Jimmy Johnson who finally claimed a Rayovac FLW Series title on his home water of the Mississippi River after years of close calls. Despite the trying conditions anglers dealt with this week, Johnson still managed to tally up 45 pounds, 7 ounces worth of bass in three days to go wire-to-wire on his home water.

After posting the biggest limit of the tournament on day one – 20-4 – Johnson knew it wouldn’t be easy in the coming days. The river was high during practice thanks to multiple thunderstorms over the past weeks which would have been fine. However, the U.S. Army Corps of Engineers (who operate the dams) began pulling water which dropped the water level nearly a foot on day one.

Day two saw another drop in water level coupled with 20 mph winds out of the south. Johnson's day-two catch dwindled to just 11-6. The only good thing that happened for Johnson on the second day was making the decision to throw a Yamamoto Lizard. That bait – what he calls his confidence bait – was the reason he maintained his lead heading into today.

“When we got to the ramp this morning and I noticed there was a big south wind I got worried,” said Johnson. “I wanted to run down to Pool 9 and fish for some schools of smallmouth that I hadn’t even touched but I knew that wind would ruin it. So, I made the call to lock up to Pool 7 and try some largemouth.

“That didn’t pan out so well and I think I caught one short fish in the first two hours. I made a move out to the main river up there and boxed four 14-inch smallmouth. It was getting close to noon and I knew I needed to do something different.”

Johnson made the call to lock back into Pool 8 where he had done the bulk of his damage this week. He noticed the wind had made a change to the north and he figured he should run some of the wing dams that produced the majority of his big fish. It was a move that paid off in a big way.

“I started working my way down the river and hitting wing dams I had caught big fish from and caught a decent one right away,” said the 43-year-old pro. “I hit a few more and caught two more decent smallmouth. The fish were on a very particular spot on the wing dam. I would Power-Pole down and just fish that certain spot for about 30 minutes.”

Johnson was targeting subtle changes on the wing dam that would hold the bigger class of smallmouth. These differences were either sand transitions or bends in the wing dam. He had several spots like this that sprawled the entire length of Pool 8. Another key was that these wing dams featured the most current flow with the shallowest water.

Over the first day and a half of the tournament Johnson used a 3/8-ounce Lethal Weapon Swim Jig (pearl in color) tipped with a white Yamamoto Swim Senko. He threw it on 16-pound Yamamoto Sugoi fluorocarbon. As the conditions changed, so did Johnson. Confidence became everything which is why he made the change to Carolina-rigged Yamamoto Lizard (green pumpkin color) late on day two. Johnson would keep that in his hand all day on Saturday to post a limit of 13-13, ultimately giving him the victory.

“The swim jig and lizard are my one-two punch on the river. When stuff gets tough that lizard is by far my go-to bait. And really I think the biggest factor for me was noticing the change the fish were making late in the day on Wednesday (final day of practice). Those fish were pulling off of points and setting up on the wing dams.”

The crop of anglers in the La Crosse area is as tough as anywhere. Johnson knows how hard it is to win around here and credits the level of competition to his success.

“I fish the BFL’s against Mike Brueggen and halfway through the season we got in a tight points race. Brueggen called me a ‘formidable adversary’ and something about that drove me a lot harder. There are a lot of good fishermen in La Crosse and I consider him (Brueggan) to be one of the best. Having people like that around you makes you push harder and I know it has made me a better angler.”

Jeff Ritter of Prairie du Chien, Wis., spent his week quietly climbing up the leaderboard. He came into day three sitting in seventh place with catches of 12-12 and 14-14 from days one and two, respectively.

Ritter was one of the only anglers to improve every day of the tournament even though conditions got tougher and tougher. He saved the best for last after hauling the day’s best limit weighing 15-5 to the stage to launch him into second place.

“I found a special spot on Pool 8 a few years ago that held a ton of fish when the water got high like it was,” explained Ritter, who landed his third top 10 in Rayovac Series competition. “I checked it in practice and knew they were in there so I left it alone during the BFL Super Tournament last week.

“The water came down so much on the first day that I couldn’t get back to the school I wanted to start on so I ran to my special spot. It turned out to be way better than I expected.”

Ritter’s special spot is an isolated patch of weeds in the middle of a large grass flat in the middle section of Pool 8. It is positioned where current is always hitting it and features slightly deeper water.

“When I went back to that spot on the second day it really showed itself. I was excited to get there this morning and when I did I had a limit by 8 o’clock, but it was nothing special. I decided to lock down to Pool 9 for a while and managed to cull once.

“I came back up Pool 8 around noon and ran back to that spot and they were there. I caught 20 fish as fast as I could unhook them. I probably caught 70 fish or more from that spot all week and I bet I could still go out there and catch some more. It was a fun week.”

Ritter stuck with a Spro frog in a red color the entire week. He tried to throw a lighter, more natural color frog but the fish would only slap at it. His setup included a Quantum reel with 65-pound PowerPro on 7’2” IROD.

For his efforts this week, Ritter received a payday worth $13,878.

Falling water could have been the demise of veteran pro Mark Tucker this week. But his ability to adapt on unfamiliar water shined through as he was able to stay on fish to settle in third place.

All week Tucker had focused on backwaters but was losing fishing ground each day as the water fell. His biggest loss was a spot that produced three big smallmouth on day one that he was unable to fish on days two and three.

Tucker spent an hour idling one of his better backwaters on day two trying to locate the deepest water. Once he did it proved to be the boost he needed to keep him in the top five as he caught fish for an hour straight. The south winds on day two pushed him off of the deep hole but left him excited to try it on the final day.

His bait of choice was a Zoom Brush Hog that he fished on cut banks and the deep spot.

“It was really about staying in the areas that I was getting the most bites in,” said Tucker. “I just kept looking for areas that the fish would set up on as the water dropped.”

Mike Brueggen of La Crosse, Wis., concluded a solid streak of back-to-back tournaments with FLW. After he won the BFL Super Tournament last week he carried that momentum to a strong fourth place finish in the Rayovac FLW Series this week.

Brueggen split his time between Pools 8 and 9 this week. He covered as much water as he could with a Lethal Weapon swim jig – black and purple in color. He threw the jig on 17-pound Vicious fluorocarbon.

“I was trying to find groups of fish with the swim jig,” explained Brueggen. “Once I would find a group of them I would work the area with a frog.”

He targeted eel grass wherever he could find it. While he tried to target smallmouth this week he ended up weighing a mixed bag throughout the week.

Brueggen added another $8,954 to his career earnings with FLW. 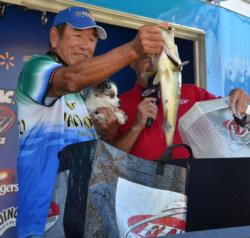 Gary Yamamoto kept it simple this week. He used one bait in one area to tally 16-2 of fish on day one. Like the rest of the field his weight slipped on day two to 12-8. Today he wrangled 12-12 worth of bass from the Mississippi to give him 40-14 for the week and an $8,058 payday.

Yamamoto opted to fish the Richmond Bay area located right near the takeoff site. The bay is lined with dozens of docks that he targeted throughout the week.

He used the new larger-sized Kut Tail Worm from his namesake company. Yamamoto prefers the larger size because he feels it better accommodates the needs of the fish. He inserted a screw in the head of the bait – something that took him over a year to refine – and rigged the worm backwards (also called a Neko Rig).