Practicing with a legend paves the winning way

ZAVALLA, Texas – Imagine traveling FLW Outdoor’s fishing circuits as a co-angler with legendary pro Larry Nixon…practicing with him…rooming with him…and just talking bass fishing 24-7 with one of the most decorated bass fishing pros in the modern world.

Welcome to the life of one lucky Joey Cifuentes of Clinton, Ark.

Young Cifuentes lives in the same part of Arkansas as Nixon and the two met through some family connections. Cifuentes went fishing with Nixon several times and “The General” took a liking to him.

Now Cifuentes is planning on traveling with Nixon next year as a co-angler on the FLW Tour. The Rayburn Rayovac event was kind of a test run of their proposed program.

And so far, the arrangement seems to be working out pretty well, especially since Cifuentes won the Co-angler Division of the Rayovac event on Rayburn, proving to his new mentor that he is worthy of the position.

“I have lot of people to thank for making this win possible, but in particular I have to thank Larry Nixon,” Cifuentes said as he accepted his trophy. “I am so lucky that he has kind of taken me under his wing as his practice partner. I’ve already learned so much from him. Not only is he a great fisherman he is great person.”

Even in Cifuentes' moment of glory, his mentor wasted no time in giving him some advice.

“Dog gone it, smile like you’ve won something!” Nixon shouted as he snapped pictures of his protégé’s winning moment with his cell phone.

“See, I still have a lot to learn,” Cifuentes laughed.

“He is a heck of a fish catcher and I’m glad he’ll be in my boat next year for practice,” Nixon confirmed. 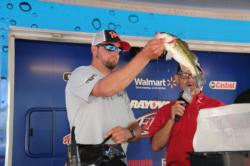 Those kinds of accolades alone from one of the world’s best pros are pretty special.

Obviously Cifuentes got a crash course on catching Rayburn bass during practice from the master. In the event Cifuentes checked in limits weighing 18-5, 14-5 and 8-0 for a three-day total of 40 pounds, 10 ounces to win a Ranger Z117 powered by a 90 HP outboard.

“After practicing with Larry I knew I could catch some fish in shallow grass on a 3/8-ounce D&M Custom baits bladed jig and on a football jig out deep,” Cifuentes said. “And I got fortunate that on the first two days I drew pros who were fishing both shallow and deep, so I got to use both lures.

“The chatterbait-style lure was a key in catching numbers in the shallow grass to fill out a limit,” he continued. “And the jig – a 5/8-ounce Jewell football jig – is what I used out deep to catch better quality fish. I didn’t catch many out deep on the jig, but the ones I caught out there were definitely better fish.”

On the final day, while fishing with pro winner Albert Collins, Cifuentes mimicked his fishing style with 10-inch Texas-rigged worm.

“Man, I’m so pumped,” Cifuentes said. “This has just been an awesome week. I can’t wait for the Tour next year.”

Corbett Ross of Port Neches, Texas, finished second with a three-day total of 38 pounds, 7 ounces worth $3,927. 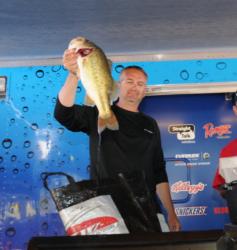 Given the finicky ways of Rayburn’s bass this week, Ross had a little remedy for the situation in the form of going to a small worm and lighter line.

Even though Rayburn is known for big bass on big tackle, that didn’t stop Ross from employing a little finesse to boat limits of 18-13, 9-11 and 9-15, respectively.

“All week I used a Zoom Trick Worm on a 3/16-ounce weight with 12-pound fluorocarbon line on casting tackle,” Ross said. “I live here on the lake and get to fish it a few days a week and it just seems this time of year when the water gets clear, the fronts start coming through and the fish get finicky, I can throw that lighter stuff and still get bites. So that’s what I did each day.”

Robert Davis of Lufkin, Texas, finished third with a three-day total of 37 pounds, 7 ounces worth $2822. 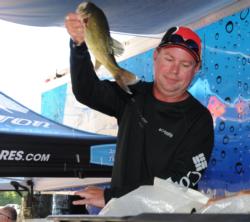 Davis found his success this week with a white 3/8-ounce Santone swimjig fished around shallow grass and pads on 15-pound test fluorocarbon.

Fox, Power round out top five

Mike Power of Conroe, Texas, rounded out the top five with a three-day total of 31 pounds, 1 ounce.

Rounding out the top-10 co-anglers in the Rayovac FLW Series event on Rayburn Reservoir after day three:

Strike King Co-angler of the Year

Congratulations to Neil Herline of Silsbee, Texas, for winning the Strike King Co-angler of the Year award in Texas Division with a total of 574 points. Herline’s finishes this year included an 11th at Rayburn in January, a 10th at Toledo Bend and an 8th this week at Rayburn.