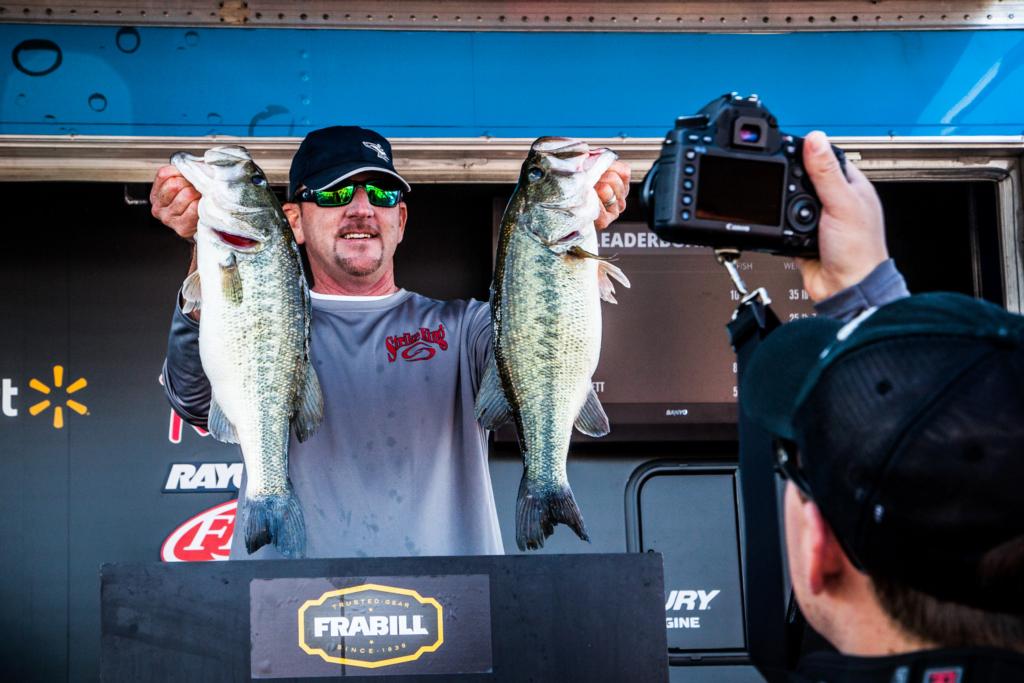 Watch out, fishing fans. There’s a Texas shootout brewing on Lake Amistad. Ray Hanselman of Del Rio, Texas, weighed what was at the time the heaviest limit of the tournament, a 19-pound, 6-ounce stringer, to take the lead in the first 15 minutes of weigh-in.

Lurking 3 pounds, 3 ounces behind the leader is the legend Denny Brauer, a Del Rio transplant who failed to get a critical big bite today. The day-one leader, Brauer can easily snatch the top spot back if he can track down a kicker on Saturday.

All three of these top pros reported that new fish are moving into their areas, being pushed by sunshine and warming water. The fish are transitioning to prespawn staging locations. A few are even working into the shallows.

Interestingly, not Hanselman, Ankrum nor Brauer is really certain of what to expect tomorrow, except that if they can time their stops on the best staging spots to intercept a new wave of fish, they can get right in a hurry – but they could just as easily miss and strike out.

Stay tuned, because there’s no clear leader in this one, and more than a handful of Amistad giants showed up at weigh-in today. The hawgs are out there and starting to bite. Tomorrow, we settle the score. 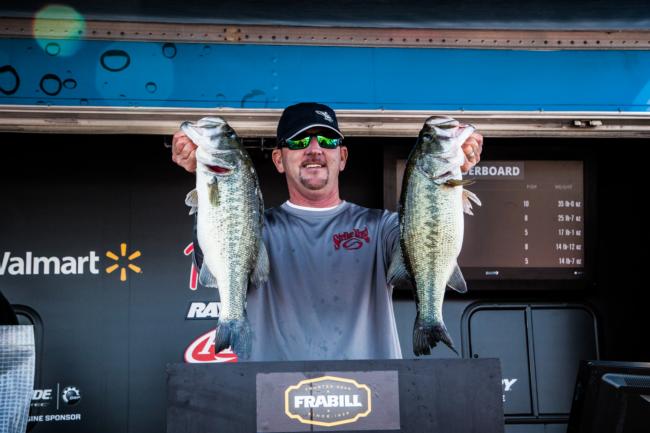 Ray Hanselman grew up fishing Lake Amistad. He’s been on the lake since age 5. And if he can hold out for one more day, the Del Rio pro will have the first victory of his FLW career and a $33,300 check to take home.

Yesterday, Hanselman caught two limits worth of fish. Today was a slower day, but he still got the bites he needed.

“I only had seven bites, but two of them were the right ones,” he says. “It [the lack of wind] made it a lot easier to fish some of that stuff out in the open.”

Hanselman’s slow start began with stops at two open-water holes that produced not one keeper. He thinks maybe the morning boat traffic ripping overhead temporarily spooked the fish. From there, he transitioned to a go-to spot that gave up three fish on three consecutive casts yesterday. That’s where he hit it big with a keeper and then his limit kicker.

“I fished several places, but most of my fish came off that one spot, including my two biggest fish,” he says.

The spot is pretty unique, and something that is definitely a local secret. He wouldn’t reveal many details, nor would he say exactly what he used to catch his fish, except to offer this hint: “I refined my pattern down to one bait. I went old school and pulled out a big-fish bait.” 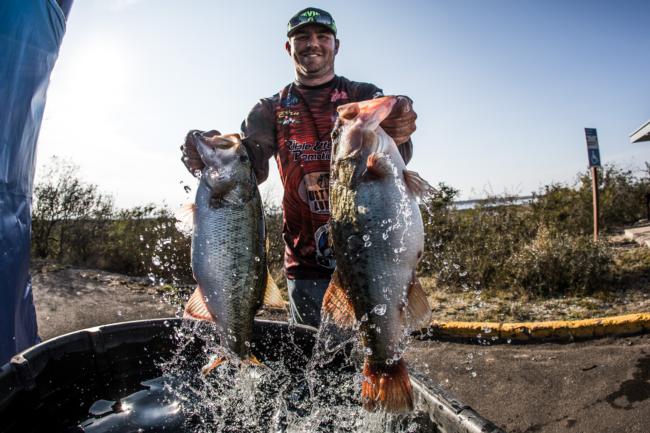 Yesterday, Brian Ankrum said he wasn’t sure what would happen on the water today. He felt his odds of zeroing were just as high his odds of hitting it big. A slow start this morning suggested he might end up dropping out of the race, but that all changed midday.

“This morning I went back to the spot where I caught them yesterday, and my co-angler caught one on the very first cast. I netted his fish and threw back out and caught a 3-pounder. Then it really slowed down. I had to run around a little and hunt for them. Later I went back and it was lights out. I filled my limit and left with biting fish.

“After that I ran around to find some new fish and stopped on a spot where I had graphed some fish in practice but hadn’t caught any. I caught a 5 1/2-pounder.”

Ankrum might be dangerous tomorrow. All of his fish today were very pale because they’d just moved in from deep water. They’re transitioning to him, and he thinks his spots will continue to reload and hold fish.

“They’re coming out of the depths onto an edge I’m fishing,” he explains. “I’m fishing pretty vertical stuff, and I’m finesse fishing. It’s a small spot, but they were loaded on it.

“I don’t think the weather will affect anything tomorrow,” he adds. “It might move some new fish up. Hopefully there’ll be some big ones.” 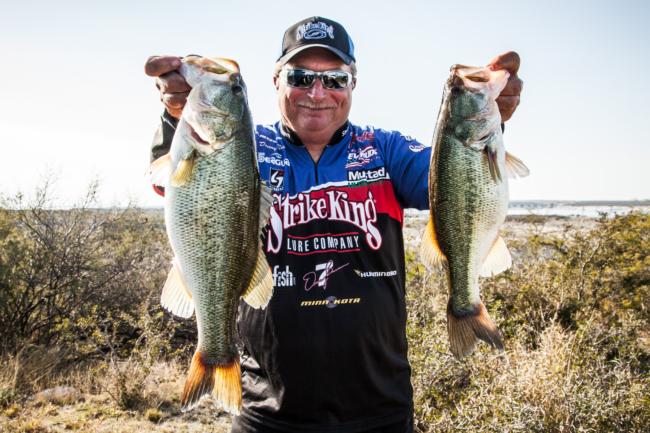 The only thing Denny Brauer lacked in defending his lead today was a kicker bite. He still weighed in 14 pounds, 12 ounces.

“It started out real slow again,” he says. “I went to the spot where I caught three yesterday, including the big one [the 9-pound, 7-ounce Big Bass] and a big one that I lost. I caught one 14-incher. It just dried up. I hit it three times today.”

Brauer managed to scrape up four keepers by 10:30 then suffered a three-hour drought that picked up only for a 20-minute window in which he landed a 3- and 4 1/2-pounder.

Brauer is targeting a combination of offshore cover and structure, but it’s primarily edges of grass beds and channel drop-offs that have given up his fish. New fish are moving into his areas, but he’s hoping to find at least one hawg tomorrow, which he’ll need to keep pace with Hanselman and Ankrum.

“The fish are starting to move up and stage near spawning areas,” Brauer adds. “We’re two to three weeks away from really good fishing.” 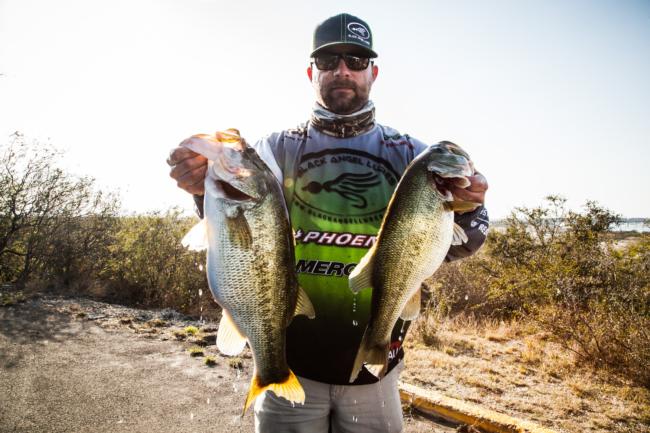 After a mediocre 11-pound, 10-ounce day-one limit, Longview, Texas, pro Wade Hudgens battled back in a big way today by bringing in 17-12, the third biggest limit of the entire tournament. He’s 5-10 off Hanselman’s lead – a significant margin, but nothing that can’t be made up in a single day on Lake Amistad.

“They’re actually moving up,” Hudgens says. “Yesterday I caught them really deep in the same area. Today, I moved shallow at about 10 o’clock, and they were there.”

Hudgens reports that the water temperature in his primary area dropped a few degrees during yesterday’s cold front. Today, however, it bounced back up to about where it was at the end of practice. That’s good news for where he’s fishing. 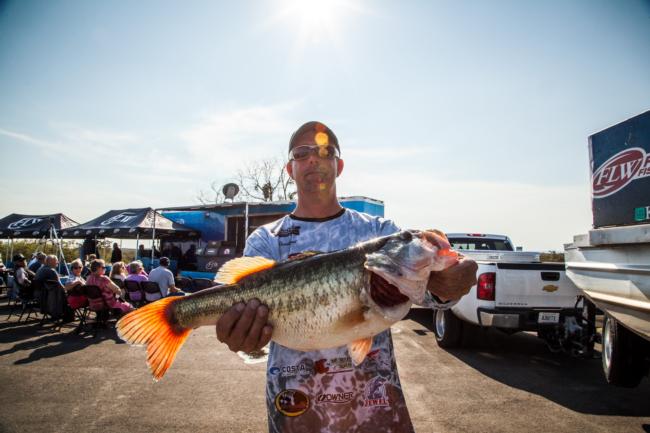 A single big fish can carry an angler a long distance this week on Lake Amistad. We saw it yesterday when Brauer busted the daily Big Bass winner with a 9-pound, 7-ounce giant to take the lead. Today, Russell Cecil of Willis, Texas, took the Big Bass honors with a fish that weighed 7-13. That fish pumped up his 16-6 limit and helped Cecil jump from 28th place to fifth.

On day one, Cecil brought in only three keepers for 9-1. Talk about a rebound.

“Conditions probably helped me,” says Cecil. “That’s not normally the case here. Usually sunny and still aren’t good for me.”

Cecil ran the same pattern today as yesterday, but he had a much easier time positioning his boat without the strong winds of day one. He was also able to stop on a few places that he bypassed on Thursday. That allowed him to pick and choose his places more strategically, and, rather than make 30 or 40 stops like he did on day one, Cecil sat on what he thinks are his best big-fish holes for much longer and later revisited a few areas to try and time his visits with when the fish turned active.

“I don’t feel like I have many spots to catch big fish, so I did lay off those spots once I caught that big one,” he says. “Some of my strategy is about confidence. You can fish through a really good spot and not get bit, then think you shouldn’t come back. But if you come back two hours later you might get bit.

“I had some dry spells,” Cecil adds. “I had a decent bag because I had one that weighed almost 8. Those fish are game-changers because there are not a lot of those fish being caught right now.” 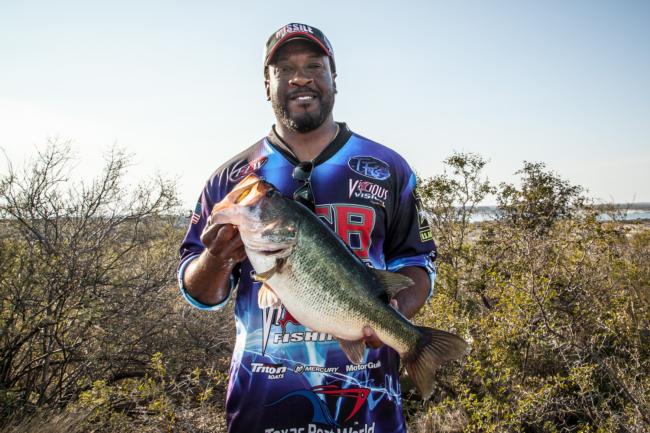 The co-angler competition is knotted up just as tight as the pro division going into the final day with six competitors cracking double-digit weights. Gilbert Miller of Midlothian, Texas, busted 16 pounds, 12 ounces today, by far the biggest limit by a co-angler this week. After catching just 1-5 on day one, Miller vaulted into the lead with a two-day total of 18-11. Yet just 2 ounces separate him from day-one leader Ricardo Carrillo who weighed in 6-10 today and 11-15 on day one. In third place is Dan Wilson of Pilot Point, Texas. Wilson caught the second-heaviest co-angler limit of the tournament today with 13-5. He’s only 1 ounce behind Carrillo.

It’s anyone’s to win on the co-angler side on Saturday, but Miller was calm, cool and confident after Friday’s weigh-in.

“I was catching fish pretty much all day,” Miller says. “I had three by 10:45, including the big one [the 6-pound, 10-ounce Big Bass winner]. We started running spots after that and were dead on a pattern. Every spot we pulled up to he [Chase Markum, his pro partner] caught a fish or I caught one. It was fun then.”

Less than a year go, Miller retired from the U.S. Army after 21 years, six days of service. He’s made good use of his time since then. He started an outdoor retail business, hooked up with Vicious Fishing to work at tournament expos and stepped up to the Rayovac FLW Series. So far, it looks like his latest fishing foray is really paying off, and he’s relaxed and ready to hit the water tomorrow.

“I’m just going to go fishing tomorrow. I get a check regardless. My wife has shoe money,” he jokes.