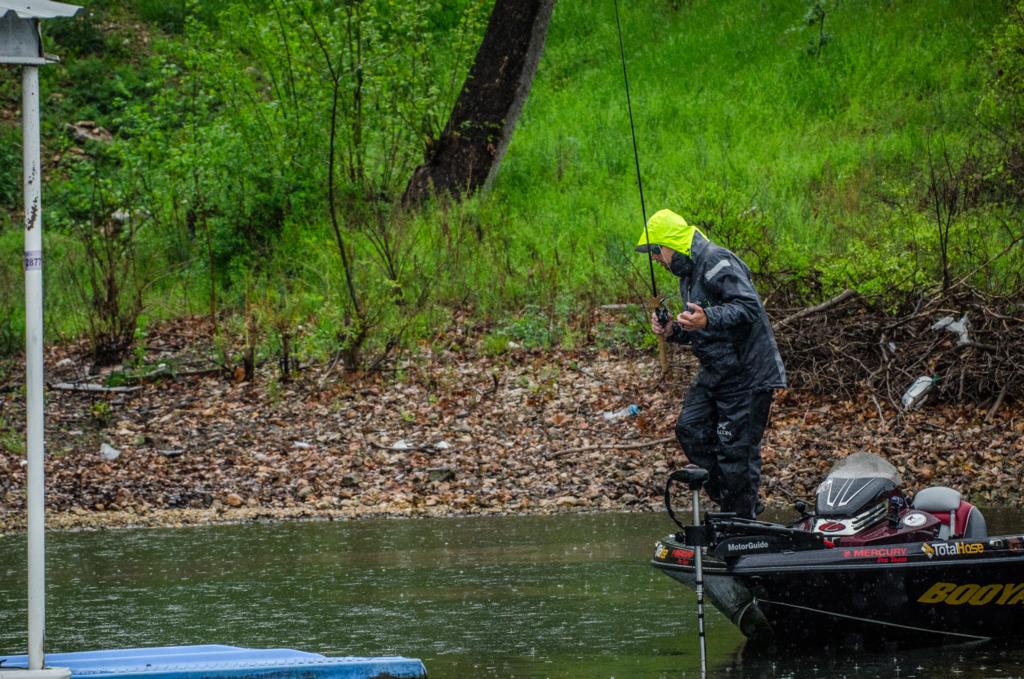 Henry put all of his energy into sight-fishing no matter what the conditions. Photo by Kyle Wood. Angler: Jonathan Henry.
April 19, 2015 • Jody White • Toyota Series

Each of the top 10 pros in the Rayovac FLW Series tournament on Grand Lake relied heavily on sight-fishing for their limits. The event, presented by Power-Pole and hosted by the Grand Lake Association, set up perfectly for looking at them. Though rain and storms made sight-fishing difficult  on the final two days, each day of the event provided the pros with big windows of clear skies and calm wind when they could effectively see their targets. Add in that Grand Lake was much clearer than usual and had a record number of bass on the banks, and you have a perfect storm for sight-fishing.

For a breakdown of how Bradley Hallman earned the win, click here.

To see photos of all the baits used by the top 10, click here. 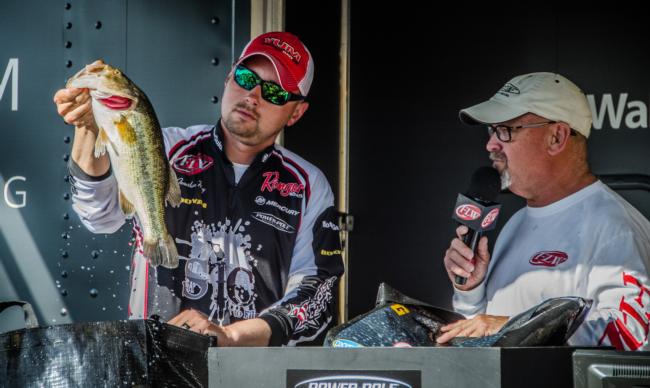 Jonathan Henry of Grant, Ala., was the first of a number of pros in the top 10 who had very little experience on Grand Lake. Henry sight-fished his way to a total of 60 pounds, 11 ounces and was in second on day one and day two as well.

In case you were wondering, Henry did not get any help from Jason Christie, his travel partner when he fished the Walmart FLW Tour as a co-angler. What he did do, was burn up his trolling motor batteries by about 3 p.m. each day in practice in order to mark tons of beds.

“It was common knowledge they were going to be spawning,” says Henry. “I looked all day the first day and marked about 40 or 50 beds. Then I fished about two hours on the second day and didn’t catch any, so I put all my rods up and went all-in [searching for bedding bass].”

Henry also tried to stay off the beaten path and found many of his beds on the main channel or behind docks. He caught his bedding fish with a Yum Christie Craw Texas-rigged with a 3/8-ounce Scottsboro Tackle tungsten weight. He also added some fish on the final day with a chartreuse and white Booyah ½-ounce double willow leaf spinnerbait that he threw around spawning shad while it rained. 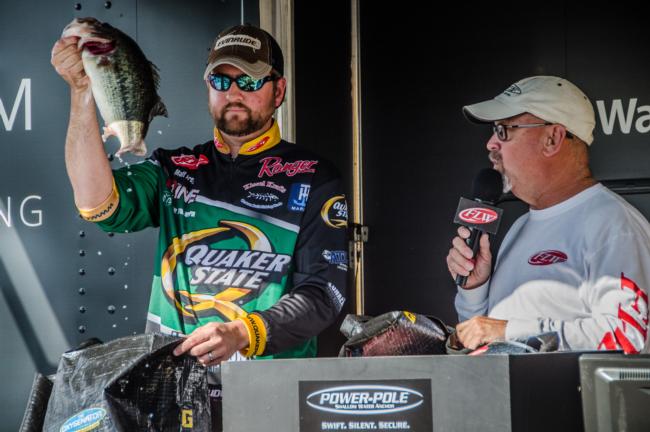 Quaker State pro Matt Arey rose one spot each day to finish third with 59 pounds, 6 ounces. From Shelby, N.C., Arey is known to be an excellent sight-fisherman, and he showed that off this week on a lake he had only been to once before.

“I went to one today [Sunday] that I saw like 18 different guys fish for and I caught her,” says Arey. “I was proud of myself for that.”

Though some water was unaffected by the rains, Arey lost fish each day to encroaching mud from upstream. Thus, by the time the final day rolled around, Arey didn’t have a full slate of waypointed bass to choose from.

Arey adjusted well all week by dragging, soaking, shaking and snapping a variety of soft plastics through the beds for his weight. In particular, he used a Lunkerhunt Lunker Stick, Lunker Craw and a Lunker Bug. 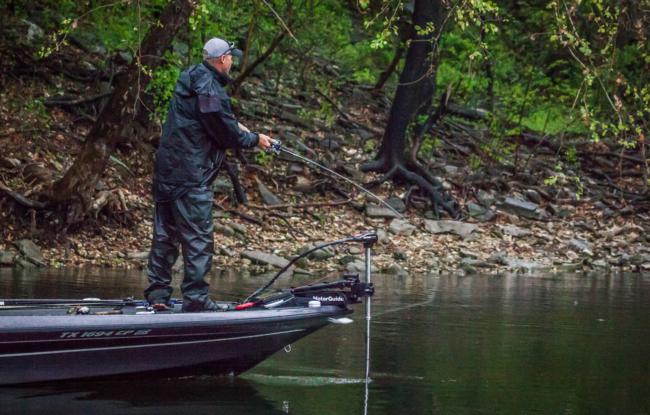 After leading on the first day with 23-13, Nacogdoches, Texas, pro Todd Castledine’s weight fell each subsequent day and he finished third with a total 58 pounds, 13 ounces.

Castledine was snake bit in the mornings; he lost a big one on a dock cable first thing on day two, and either lost or broke off his first four bites on day three. Though his first-day bag carried him, his prodigious sight-fishing skill also played a role.

“This was my first time on Grand,” says Castledine. “I committed 100 percent to the sight-fishing deal in practice. I prepared really well for the first day, but I never got a chance to prepare for the rest of the tournament like I wanted to, so I had to fish new fish each of the last two days.

“I don’t know if I was doing something different or not. I went behind a lot of people and caught fish. I might have been looking deeper than they were or maybe I was just able to catch them better.”

Castledine’s bait of choice for bedding bass was a Texas-rigged Strike King Rage Tail Structure Bug. When it was raining he mixed in the prototype Strike King Poppin’ Perch [a hollow-bodied frog type bait] to catch some fish and force others to reveal themselves. 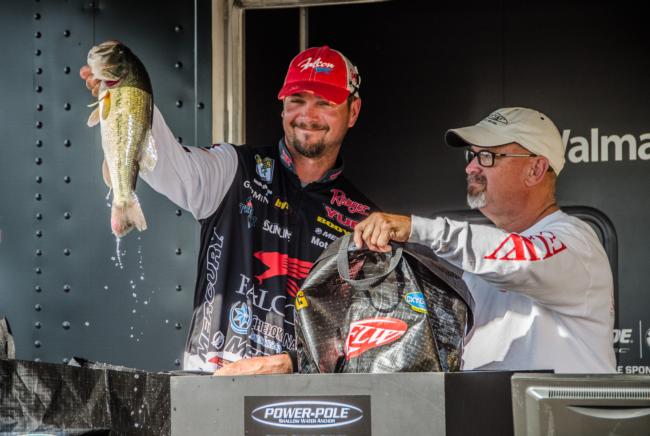 Christie stayed off the beaten track a little by targeting bedding fish that weren’t easily visible in the more stained midsection of Grand Lake. He went though areas he knew would be holding fish throwing a Yum Swurm in front of the boat – while he did catch some that way, the Swurm mostly gave away the location of beds in the stained water.

Once he identified a bed [typically in 3 to 4 feet of water], Christie pitched either a drop-shot with a Yum Bad Mama cut in half lengthwise or a Texas-rigged Yum Christie Craw or a regular Yum Bad Mamma to put them in the boat. 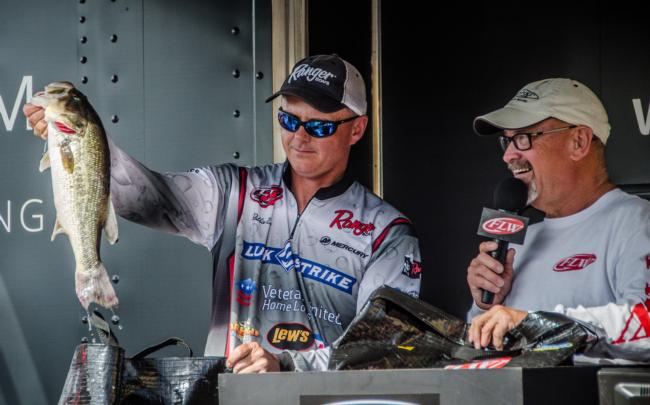 FLW Tour veteran Robbie Dodson of Harrison, Ark., finished sixth with 56 pounds, 7 ounces over the course of the event.

Called “the best sight-fisherman I know” by fellow Tour pro James Watson, Dodson caught the majority of his bedding fish on a green pumpkin-colored Luck-E-Strike Ringmaster creature bait. Between beds, Dodson threw a chartreuse and black Luck-E-Strike Rick Clunn RC2 Series 4 Square Bill crankbait and did manage to catch some extra fish on that each day.

“I was around a lot of people,” says Dodson. “Maybe I just got a little luckier than the other people. I practiced all wrong. I did a lot of fishing instead of looking in practice and I couldn’t hardly catch anything.” 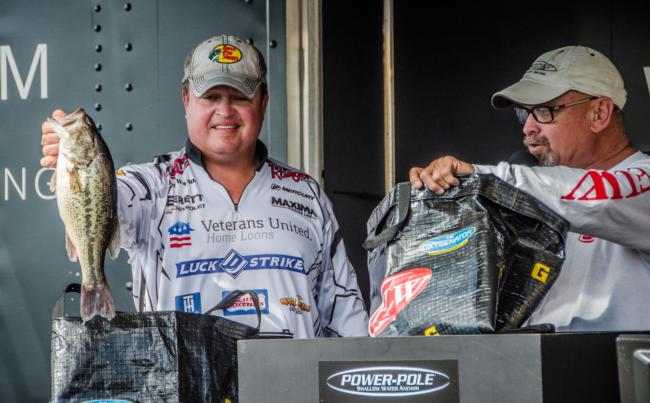 James Watson was among a number of FLW Tour pros in the top 10, and he arrived the same way as everyone else. All told, the Springfield, Mo., pro landed 52 pounds, 12 ounces over the course of the week for seventh place.

Watson primarily employed two baits for his bed fishing. The first was a Texas-rigged Luck-E-Strike Ringmaster that he cut the curl tails off of and the second was a Luck-E-Strike G3 tube. He said the tube was particularly key on the final day of competition. 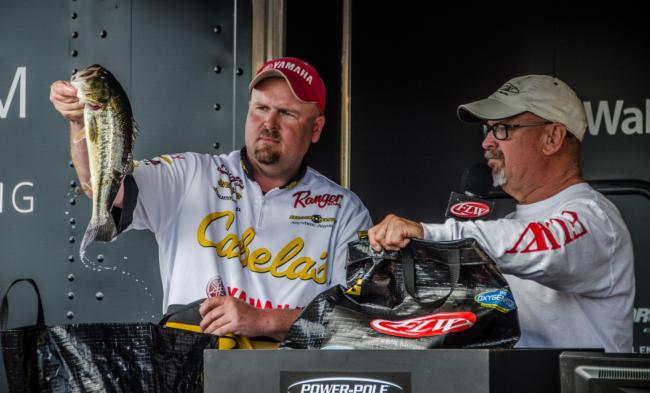 Jeremy Lawyer of Sarcoxie, Mo., has two top-20 finishes in the Rayovac FLW Series Central Division standings to his credit and he seems on track to do it again. Sight-fishing almost exclusively, he put together a three day total worth 52 pounds, 9 ounces.

“The first day of practice I just went fishing at it was terrible,” says Lawyer. “The second day I went down-lake and got on a bunch sight-fishing.”

Despite the good second day of practice, Lawyer didn’t fully pursue the sight-fishing bite until the tournament started. When he did, he threw a Fallcreek Lures Roman Craw [an ultra-realistic crawfish imitation] to aggravate the fish and on shallow beds. He used a bubblegum-colored Gene Larew Salt Craw once the fish were fired up on deeper beds so that he could see it more easily to avoid foul hooking the bass. 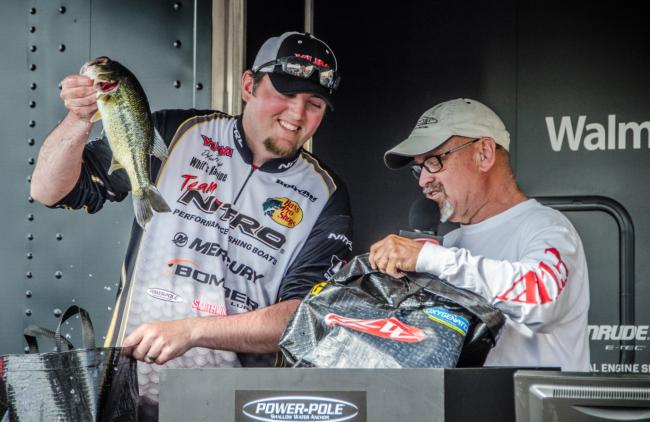 Dylan Hays got the week started off on the wrong foot when he hit a deer with his truck after practice on Monday. Fortunately, the Sheridan, Ark., pro has some very good friends, and he was still able to fish. All told, he tallied up a ninth-place finish with 5 pounds, 1 ounce and one inconvenienced deer.

While a number of pros caught one or two fish just fishing – or at least did other things when it rained – Hays caught about eight bass each day exclusively sight fishing. Unfortunately, he simply ran out of marked fish on the final day and was hard-pressed to find more in the rainy conditions during the morning.

He used a Yum Dinger, a Yum Craw Chunk and a Yum Bad Mamma to catch them and credited his Costa Del Mar glasses for letting him pick out fish a little deeper than others. 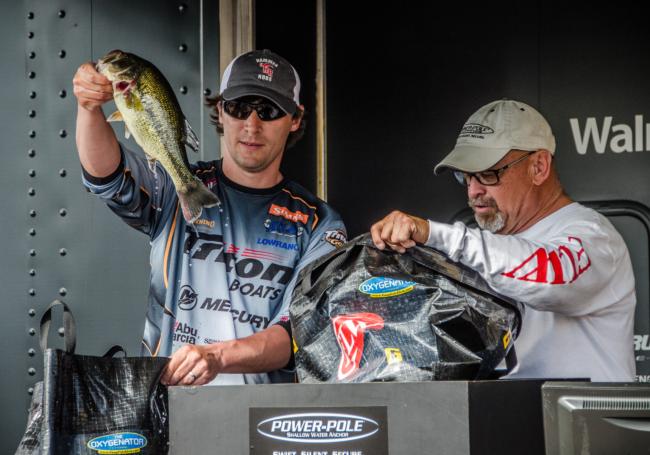 10. First-Time Sight-Fishing Pays Off For Perkins

Brandon Perkins of Counce, Tenn., calls the Tennessee River home and was happy to admit that he had never sight-fished before in his life. He says he’ll probably never do it again, but it sure worked out as he nabbed 10th place with 50 pounds, 9 ounces.

“I probably marked about 500 in practice,” said Perkins. “I was marking anything 3 pounds or bigger, and the ones that were locked on I made a different note. Never doing this before, I wasn’t always sure.”