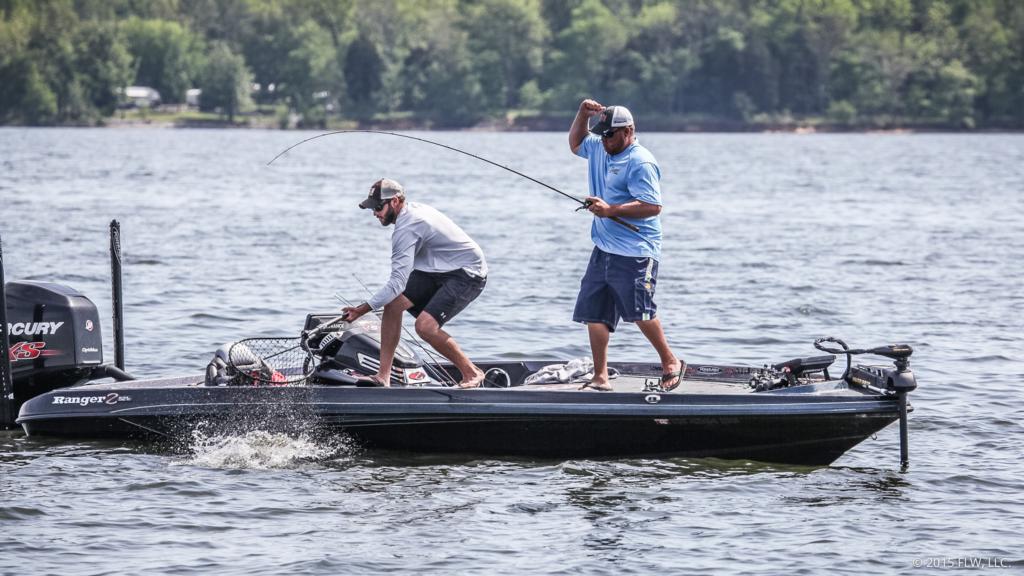 “The winner will find his fish today,” Jason Lambert observed as he readied his gear for the start of the Rayovac FLW Series Central Division tournament presented by Evinrude on Kentucky Lake this morning. Apparently, at least some anglers did locate bass, Lambert included. The ledge fishermen who ran to the vicinity of Paris Landing in Tennessee have some big fish in their livewell, if not lots of them. Most of those anglers – Lambert, Michael Wooley and Kerry Milner among them – have limits topped by fish that are sure to draw oohs and aahs from the crowd gathered for the weigh-in this afternoon starting at 2.

As the tournament started, the road forked at the end of the Moors Resort & Marina breakwater for the 208 pros and their co-angler partners, with boats peeling off north and south in equal measure. By noon, most of the boats seen running on the main lake were heading north, either to fish the bays along the east bank of the lake or to cut through the canal that connects Kentucky and Barkley lakes to fish the latter.

Although anglers fishing the banks and docks on the north end of the lake – as well as ledge fishermen –reported spotty results, some of the anglers who are fishing steep banks and ledges in the bays and coves north of the Highway 68 Bridge had limits and were culling by midmorning.  Missouri pro Kent Brown, Harry Barber of Madisonville, Ky. and Dan Morehead of Paducah each had stringers of 15-pounds-plus.

The full field will fish tomorrow, with the top 10 advancing to Saturdays’ championship round.