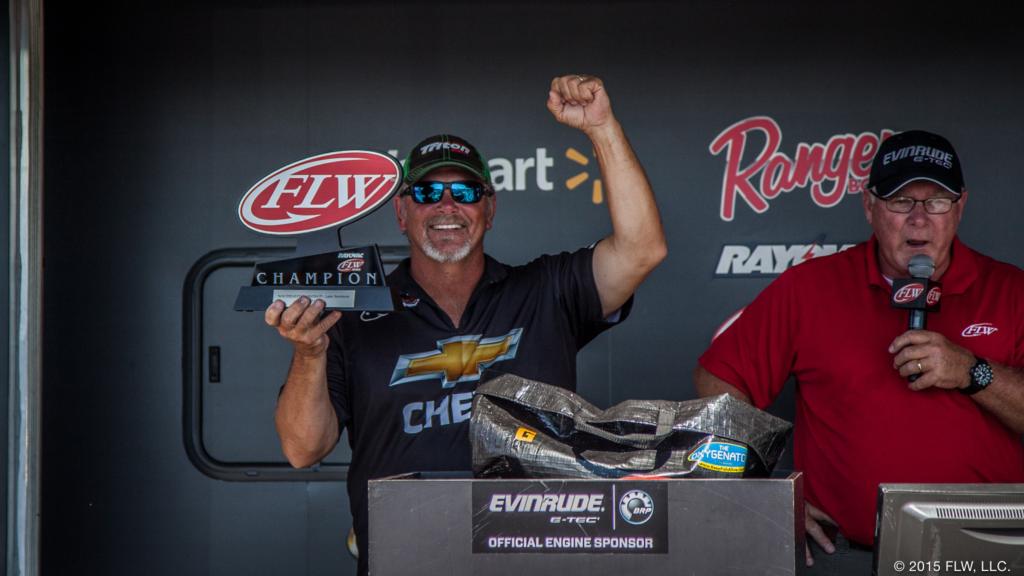 Greg Jeter was the co-angler champion on Lake Seminole. He weighed 41 pounds even over the course of the event. Photo by Jody White. Angler: Greg Jeter.
May 23, 2015 • Rob Newell • Toyota Series

Call it a local’s sweep at the Rayovac FLW Series on Lake Seminole. While local pro Clint Brown of Bainbridge, Ga., won the boater Division, his Bainbridge neighbor, Greg Jeter won the Co-angler Division to make it a local twofer.

Obviously local knowledge goes a long way at Lake Seminole no matter which end of the boat you’re in.

“This feels awesome to win at home,” Jeter says. “I finished fifth here last time as a co-angler and I’ve won some other tournaments here, but this is certainly my biggest win.”

Being a local, Jeter was able to sway his pros to sample some of his own fishing holes on Seminole each day. He said the area was a grass and timber mix in about 8 feet of water. He primarily used one lure all week: a green pumpkin Zoom Mag Speed Worm (green pumpkin) rigged on a 3/8-ounce weight on 16-pound Seaguar fluorocarbon.

“I threw other lures, but the big Speed Worm is really the only thing I could get a bite on,” Jeter says.

On day one, Jeter drew another Bainbridge local, Howard Poitevint and the two had a great day of fishing, providing Jeter a 15-3 start to the event.

On day two, Jeter drew pro Jeff Cannon and Cannon obliged Jeter with a trip one of Jeter’s hotspots where he caught two 6-pounders. Later in the day, Cannon took Jeter far up the Flint into the swift currents where Jeter finished his limit topping the scales at 19-3.

On the final day, Jeter rode with pro leader Tim Reneau and carved out two bass for 6-10 to seal his win with a three-day total of 41-0 earning him a new Ranger Z117.

“I really have to thank all my partners,” Jeter says. “They were all great guys who gave me some time on water I was familiar with. Without that, this wouldn’t have happened.”