How they caught ’em – north, south, green and brown 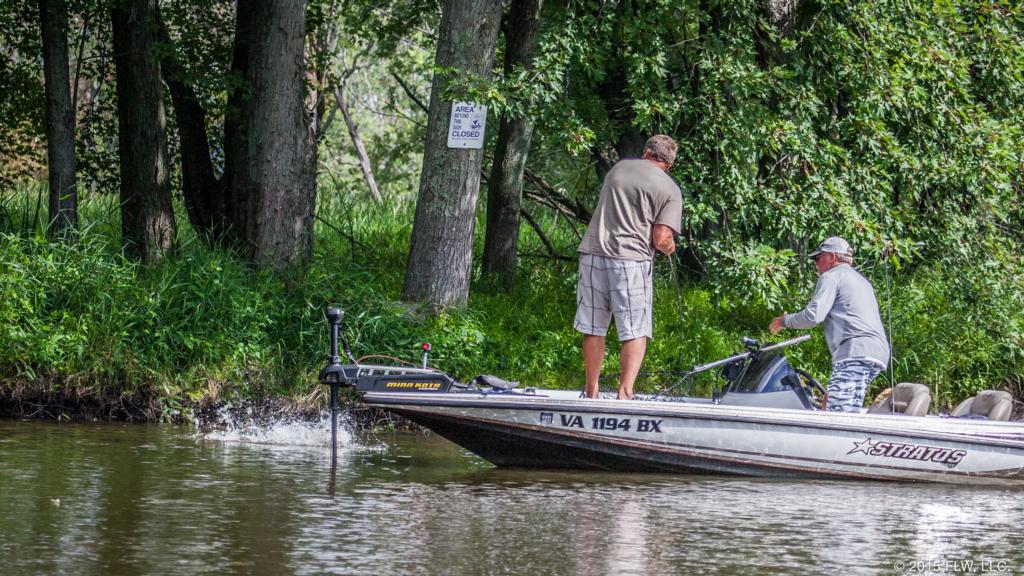 Glenn Browne basically lapped the field last week in the Rayovac FLW Series event presented by Plano on Lake Champlain by fishing a jig on the bank down by Ticonderoga. He won by almost a 10-pound margin over second place. The rest of the top 10 caught fish from Missisquoi to Ti – or far north to far south – and sampled about every kind of fishing that Champlain has to offer.

Here are the details on their patterns. 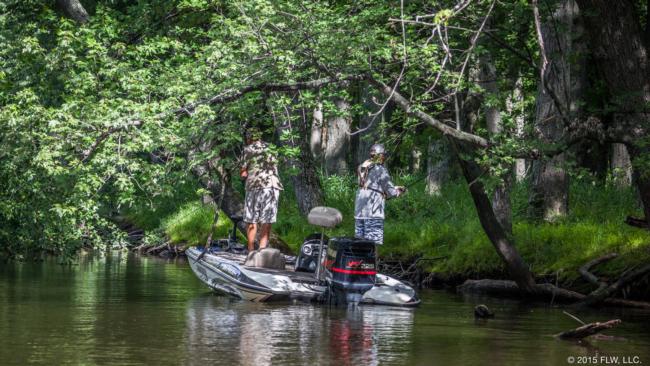 With a total of 53 pounds, 12 ounces, the Linden, Va., angler caught enough weight that he could have won in some years on Champlain. Unfortunately for Otis Darnell, there was no stopping Browne this time around.

Darnell was on a ton of fish. He says there were thousands where he was fishing, and he might very well be correct. Instead of targeting the grass that is so prevalent in Champlain, Darnell hit cutbanks and laydowns in the Missisquoi delta for his limits.

“The first day I should have had a 24- or 25-pound sack in the morning,” reveals Darnell, who was plagued by lost and missed fish throughout the event. “Today [Saturday] I should have caught more fish later in the day. The current started up more, and I think the small fish would just beat the big fish to the bait.”

A medium-sized swimbait on a belly-weighted hook was what Darnell used almost exclusively. He would pitch or cast it right up on the bank and let it flutter and fall in the slow current. One limiting factor was Darnell’s tackle collection – he only had a few of the right hook and was unable to get more during the event. Thus, he had to go to great lengths to retrieve his bait when he hung up. 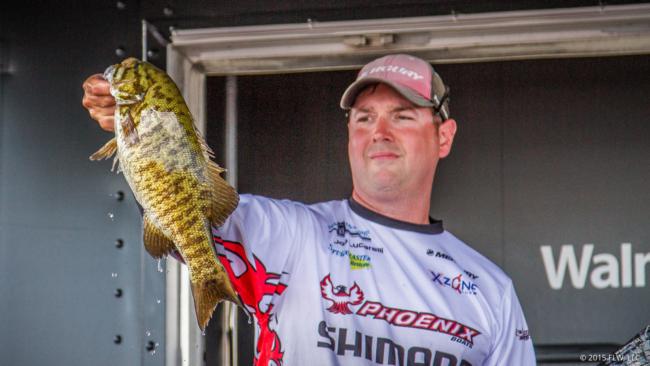 Joe Lucarelli is always a contender in the Northeast when smallmouths are in play, and this week the Center Harbor, N.H., angler rode brown fish to a 52-pound, 11-ounce total and yet another top-10 finish on Champlain.

The Champlain veteran found his smallmouths up north on the New York side in 16 to 18 feet of water.

“I was targeting the short, hard grass on the outside edge,” explains Lucarelli. “It’s hard to find, but when you do find it they use it, and there was a lot of bait on it.

“With the [Inland] Sea, you catch a lot of 2-pounders,” adds Lucarelli, who averaged 10 fish per day. “I didn’t really want to deal with that, so I fished the New York side for the big dogs.”

Lucarelli mined his areas with a drop-shot rig and a Carolina rig.

“They wouldn’t come off the bottom to eat anything,” reveals Lucarelli. “They were glued. I just had to drag real slowly. They bit a little better when the wind was blowing. Then I would get them on the rig. In the lee, or when it would slick off, I used the drop-shot.” 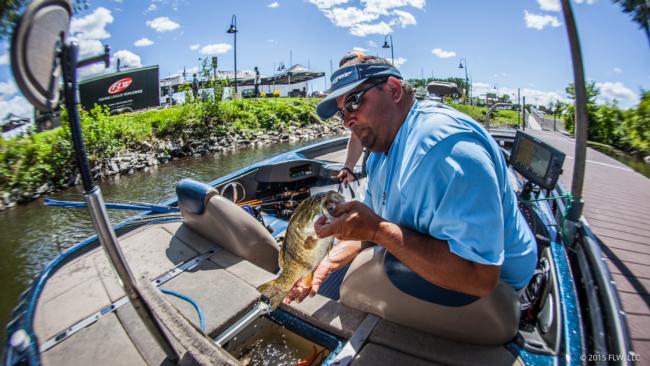 David Cioppa cracked 22 pounds, 13 ounces on day one for the lead. Though the Hopkinton, Mass., angler couldn’t maintain his lightning pace, he deftly mixed and matched his way to fourth place.

“Obviously, I’m a fisherman. I went to the rock pile,” says Cioppa of his call to start day three on his magic area from day one. “There was wind from the west, and 3- or 4-footers rolling. We got our butts kicked.”

The same thing happened on day two, and Cioppa adapted both days by finding smallmouths somewhere else. On day two he found them on the New York side, and on day three he found them in the Inland Sea.

Cioppa’s day-three limit came from one 50-yard section of a shoal about 20 feet deep. A football jig did the trick on day one, but a Carolina-rigged Zoom Baby Brush Hog produced on subsequent days.

“Things changed big-time from pre-fishing,” finishes Cioppa. “I had to mix it up a little each day. Today [Saturday] I just wanted to grind it out and make sure Alec [Alec Morrison, the second-place co-angler] had a good limit.” 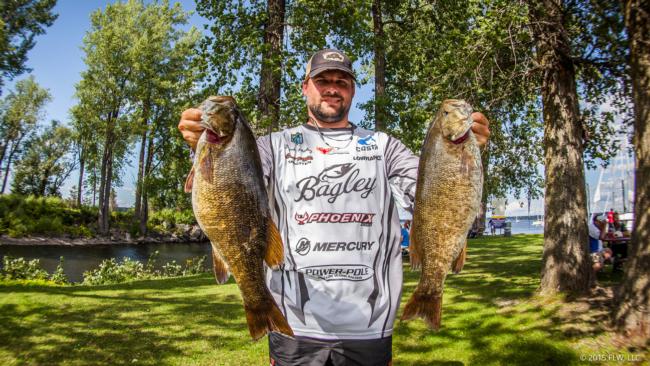 The top 10 featured a number of anglers from faraway places, and Brock Mosley of Collinsville, Miss., was the best behind Glenn Browne. Mosley caught almost all smallmouths from the Inland Sea and weighed 52 pounds, 7 ounces over three days.

“I started off getting a limit of smallmouths every morning on topwater,” details Mosley. “That would calm me down to where I could go out deep and video game fish some rock piles. Then if I got a good limit I would go flip some docks and just try to cover as many as I could.”

Mosley’s grass was in about 10 feet, and he walked the new Bagley Knocker B topwater over the top of it each morning. His rock piles were in 25 to 30 feet of water.

“I came here last year and spent about 10 days for a B.A.S.S. Open,” explains Mosley. “I found a lot of rock piles and things then, and they seemed to hold fish this year.” 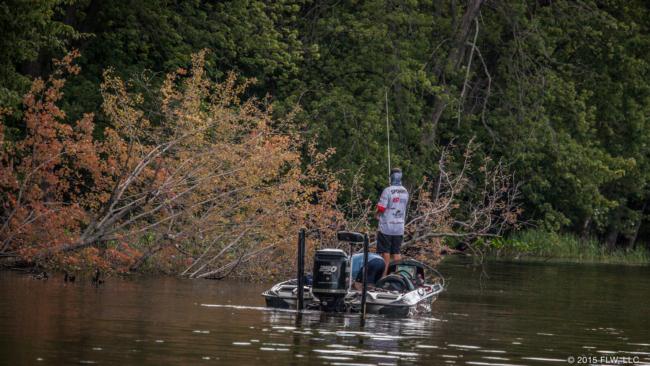 Gerald Spohrer of Gonzalez, La., took a two-pronged approach for his limits, starting the day with smallmouths in grass and adding largemouths later from laydown trees in the Missisquoi River delta. In all, he racked up a 52-pound, 1-ounce total.

Spohrer found his smallmouths in a grass bed where he was initially looking for largemouths.

“I was stroking a jig in the grass like I do at Toledo Bend, and I started catching nothing but smallmouths,” explains the excitable Spohrer. “I thought, ‘Man, these smallmouths are supposed to like tubes,’ so I started stroking a tube and catching more.”

Spohrer’s largemouths were suspended under certain bushy laydowns in the Missisquoi.

“I noticed in practice that every time I got to the end of a green tree I could throw up in there and yo-yo my jig and one would load up on it,” says Spohrer. “But, those trees were really bushy and hard to fish. It seemed like if I could get two or three flips in there and not get hung up I was good. If I got hung up I would spook them.

“Before I came here I only caught one smallmouth in my life, and it was by accident,” he adds. “I didn’t even know where the boat ramp was and didn’t get any help. I just showed up and signed up to get it under my belt. I must have caught 500 smallmouths this week. Champlain is my new favorite lake.”

Spohrer used a green pumpkin tube on a 3/4-ounce Texas rig for the smallmouths and a 3/8-ounce bruiser-colored Missile Jigs Ike's Mini Flip Jig with a green pumpkin Missile Baits Baby D Bomb as a trailer in the trees. 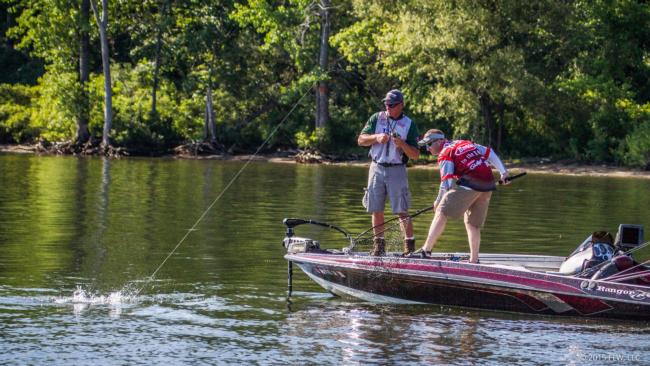 Derick Olson was the second member of the top 10 to rely on Ticonderoga’s largemouths throughout the week. The Honey Brook, Pa., angler caught 51 pounds, 2 ounces over three days using a slightly finesse approach in the grass.

Olson used a drop-shot with a Zoom Centipede and anywhere from a 1/2- to 1-ounce weight, which he varied depending on the thickness of the grass. He targeted scattered grass clumps in 6 feet of water.

“I would try and stay up-current and cast down to the clumps,” explains Olson. “I just tried to work it right up to the back of the stems. Then they would bite. I had one spot I fished on the last two days where I caught all my fish. I had about 15 areas marked, but they didn’t all stay hot.

“The first day was a pretty good morning bite,” Olson adds. “The last two were pretty good bites in the afternoon. They would turn on at about 11:30, and then I would run out of time.” 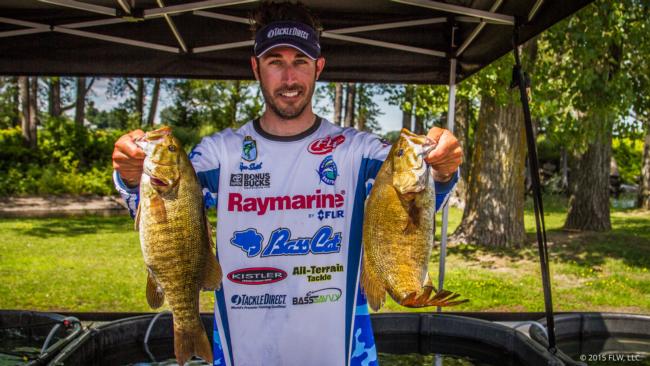 Of those in the top 10, Ryan Smith of Galloway, N.J., was probably the most reliant on a single spot for his finish. For him, one spot was worth 50 pounds, 15 ounces and eighth place.

“I couldn’t catch any largemouths. I tried. I went looking for them, and I couldn’t find them,” explains Smith. “I just had one smallmouth spot with a wad of them on it.”

Smith’s honeyhole was a long point with some current and scattered rock and grass in the Inland Sea. He caught them about 11 feet deep on the first day, but the fish moved out slightly as the week progressed.

“Day two was my best day. I probably caught 15 or 20 fish,” says Smith. “I probably caught about 10 on each of the other days. I just had an area with quality fish. A lot of guys were fishing areas with smaller fish.”

Smith did his damage with a Gene Larew Biffle Bug on a Carolina rig. 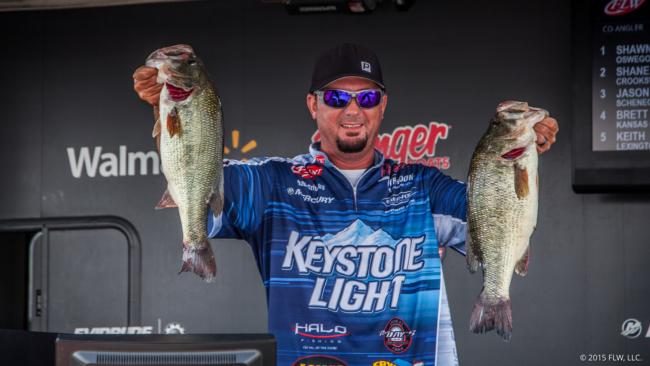 He cracked the 20-pound mark on day one by flipping a junebug-colored Charlie’s Worms Salt Bang-O on a small section of grass near Ticonderoga, but the south end failed to sustain him.

“That’s just kind of how it worked out,” say Grigsby of his north-and-south attack. “I had one little spot I found a couple years ago up north, and it really helped me through.”

Upon returning from Ti, Grigsby targeted a 10-foot-deep flat with a variety of grass to catch smallmouths. Though he never caught more than 10 in a day, Grigsby never weighed a limit without at least one smallmouth to help. For the smallies, a shad-colored Charlie’s Worms Zipper Dipper rigged on a 3/8-ounce jighead with the tail dipped in chartreuse dye did the trick. 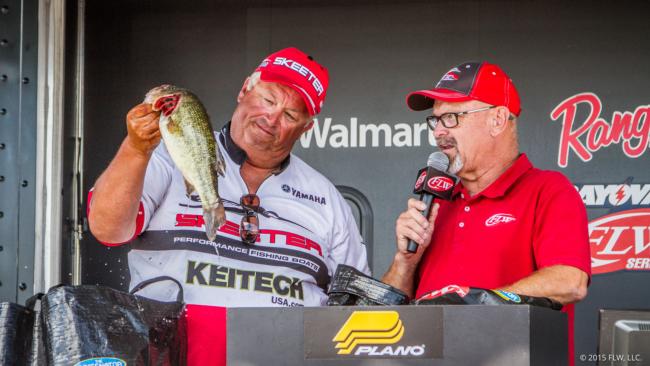 Daniel Murphy of Wharton, N.J., picked up 10th place with 47 pounds, 15 ounces. He relied solely on the Inland Sea.

After mixing it up on day one, Murphy ended up catching the majority of his weight from a sheltered shallow grass flat

“Trying to get out of the wind and drifting seemed key,” explains Murphy. “If I could get in a place where I didn’t need to be on the trolling motor and I didn’t spook the fish, that helped a lot. Just making long casts and being stealthy were keys.”

Murphy did his damage with a green pumpkin blue-colored 3/8-ounce Keitech Model I Casting Jig with a black and blue Netbait Paca Chunk as well as a new buzz frog from Keitech.