Matt Arey leads the way, as the field vies for final spots at the Rayovac FLW Series Championship 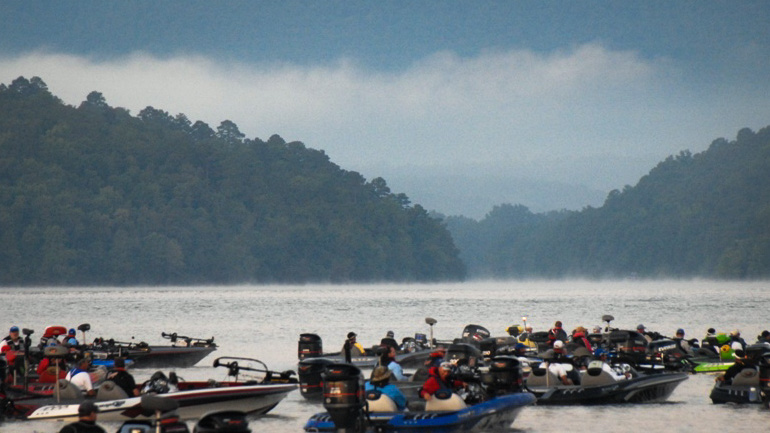 The Central Division of the Rayovac FLW Series will wrap up this week on Lake Dardanelle after an already exceptional season that has seen giants on Kentucky Lake and one of the best spawn tournaments in memory at Grand Lake. On top of battling for the $40,000 top prize for winning at Dardanelle, anglers will also be competing to claim the Strike King Angler of the Year award and its $2,000 prize package, which includes deposits into the 2016 Rayovac FLW Series.

Currently, Quaker State pro Matt Arey is in the driver’s seat, but the field behind him is close and pretty stacked.

Here’s how it breaks down.

Matt Arey started the season with a third-place finish at Grand Lake. There, he relied entirely on spawning bass for his daily limits and was able to exploit one of his prime strengths.
Arey finished 12th on Kentucky Lake where he fished offshore on the first day and targeted docks on the second day when his ledge schools dried up. Unfortunately for Arey, he’ll need to wrap up the AOY on a lake he’d never fished before practicing this week.

“I like the lake. It’s got a lot of options shallow, deep and in between,” says a moderately confident Arey. “It’s got a lot of color in it right now because they are pulling water through pretty good [though it should be clearing as the week goes on]. Overall, I like how it’s setting up, but it’s still August and it’s going to be a grind. It seems like the bites that I’ve gotten are the right ones, but I’m not getting many of them.”

Of course, there’s always the chance that Arey is distracted by the Forrest Wood Cup just a few days away, right?

“That’s the hardest thing,” reveals the Quaker State pro. “I’ve got enough experience fishing full-time that all my focus is on Dardanelle, but there are a half-million bucks and a big silver cup on the line just next week. I don’t feel like I’m not focused on Dardanelle and my practice, but the Forrest Wood Cup is obviously right around the corner.”

The pack of pros in a tie looking to catch Arey is a pretty talented one. Todd Castledine, Robbie Dodson and Todd Hollowell are a murderers’ row, and the odds seem good that at least one of them will catch ‘em and pressure Arey. Of course, none of them has ever fished an FLW event on Dardanelle before, so no one is going in with killer local knowledge.

Castledine is a stud in Texas, and he hasn’t done anything to indicate that he won’t be able to catch quality limits on Dardanelle. Though he typically dominates around the spawn, Castledine is very adept offshore and can work shallow too. Point is, don’t count him out.

Dodson is also completely void of Dardanelle competition experience, and the lake, with its shallow grass and riverine environment, really falls outside of his strong suit, which is fishing rocky highland reservoirs.

Dardanelle has a lot of grass now, but if there’s any kind of offshore bite Hollowell ought to be able to dial it in. He’s an expert with his graphs and stands a great chance of banking a high finish if he can get on an offshore pattern.

Ledge Sticks in the Hunt

The group from fifth through eighth is pretty remarkable. The first among them is Michael Wooley at 467 points, then Tom Redington at 464, Mark Rose with 461 and finally Brandon Hunter with 456. All told, the pros who make up the second half of the top 10 have as much offshore savvy as it is possible to have. That said, if there is one angler that stands out from this batch it is Rose.

While Rose does have some past experience on Dardanelle (27th in the 2009 FLW Series event and 94th in a 2007 FLW Series event), it isn’t enough to lock him in as a favorite. The reason to expect a lot from Rose is his history. The Walmart pro wasn’t always a ledge expert. He started his career as a bit of a river rat and was known for scrapping it up shallow. So, not only is Rose really good, but his knowledge combo might be perfect for Dardanelle.

Down and Maybe Out

Everyone else in the field will be at least 40 points back of Arey, so it will take a combination of some bad finishes from the guys on top and a great finish from the would-be usurper to pick up the AOY title. The remaining angler with perhaps the best chance to make a run at the title is FLW Tour pro Greg Bohannan, who’s in 10th place with 443 points.

Bohannan spent his college years at Arkansas Tech just a stone’s throw from Dardanelle and managed a bunch of time on the water between class and baseball and football. Thus, he’s got some pretty solid experience on the lake. Bohannan also snagged a 33rd-place finish in the 2009 FLW Series event on Dardanelle and has already put in some solid practice time on the lake. So, if someone is going to come from deep to knock off Arey, then Bohannan is my pick.

The AOY isn’t the only thing on the line at the season finale – berths in the 2015 Rayovac FLW Series Championship are also at stake. With the top 40 pros and co-anglers from each division heading to the Championship and 10 spots in the Forrest Wood Cup up for grabs once they get there, a big section of the field will be interested in more than just a tournament paycheck.