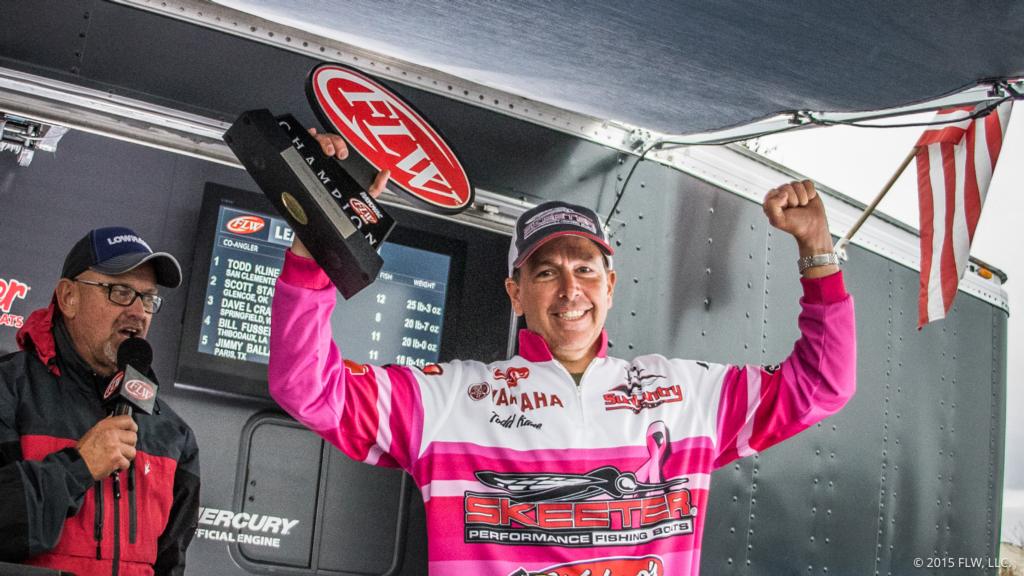 The dominance continues for professional-surfer-turned-bass-angler Todd Kline, who won the 2015 Rayovac FLW Series Championship’s co-angler division on the Ohio River this week.

The Florida native who calls San Clemente, Calif., home is currently riding one of the hottest success streaks in all of tournament bass fishing. In fact, if Ray Hanselman hadn’t just gotten all nasty on us and won four tournaments in a row, Kline’s performance over the last three FLW Series seasons would probably be the biggest FLW story this fall.

That’s because his latest accomplishment is much more than just a championship victory. It’s proof positive that Kline is a special talent in the back of the boat, and an angler on the rise. And it shows just how great an opportunity the FLW Series is for co-anglers who aspire to the highest levels of the sport.

Let’s break it down:

When it comes to tournament fishing, Kline and Hanselman are somewhat complementary in their skills and the stages of their careers. Kline is a former champion surfer. He’s mastered the mental side of winning, but he’s still perfecting his fishing skills. Hanselman, on the other hand, has decades of professional fishing experience and says that the mental side has only recently “clicked” for him. Read more about Hanselman’s story here.

The end result for both anglers has been tremendous success.

“For me, I truly believe – and it’s something I learned in surfing – mindset is everything,” Kline says. “I don’t care if it’s at your work or at a competition in any level, if you are relaxed and focused, and, no matter what happens, if you believe you’ll succeed, then nine times out of 10 you’ll succeed. If you start questioning yourself and why you are doing it, you’re setting yourself up to fail.”

The FLW Series Championship is a perfect example of Kline’s theory in action. Many anglers arrived at the Ohio River with the preconceived notion that this would be a challenging, low-weight and, frankly, not very fun tournament. Few expected to see the upper teens and even 20-plus stringers that were weighed in. And many of those anglers’ attitudes sealed their fate from the beginning.

Kline wouldn’t let himself fall into that trap. In fact, he rebounded after catching just two bass on day one to win the tournament.

“It’s easier said from the back of the boat than it is from the front, but I truly believe that every cast can be a fish,” he says.

To help him keep his head on track and to enhance his learning experience, Kline has made a point to travel, practice and room with anglers who share his attitude about competition. In the case of this tournament, he roomed with – who else – Hanselman. 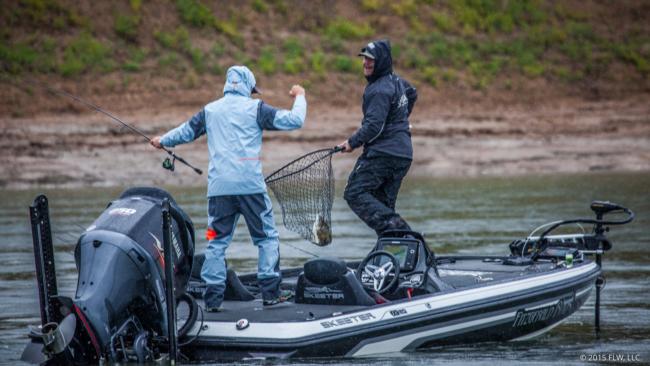 Kline did most of his work this week with a trio of lures: a Cool Baits under-spin, a nail-weighted Zoom Trick Worm side-hooked with a small finesse hook and a 4-inch Basstrix swimbait.

“I practiced with two guys from California, Jason Milligan and Wade Curtiss,” Kline says. “I kind of dialed in that real light under-spin with a Keitech swimbait on it. It’s something I’ve done in the past for largemouths, smallmouths and spots.

It took Kline until 2:20 p.m. to land his first keeper – a 2-pounder that bit right at the boat – and he added another later by throwing right on top of a bass that was chasing shad to the surface. Those were his only keepers. They weighed 3 pounds, 9 ounces, and Kline was in 46th place.

On day two, Kline fished in the backs of creeks in the Smithland Pool of the Ohio with Dave Lefebre.

“He said the water had dropped about 2 feet [overnight],” Kline says. “The stumps were out of the water, and he said he couldn’t even see them the day before. So we had perfect targets. He was throwing a custom worm. I tried the under-spin, but that’s not really the right type of area. You want that around rock and shad.”

Following Lefebre’s lead with the worm, Kline swapped to his own finesse rig – the nail-weighted Trick Worm – and put together a limit worth 7-4. More importantly, he squeaked into the final day in 10th place.

That’s where the side-story begins. Kline was paired with Trevor Fitzgerald on the final day. Fitzgerald, of Belleview, Fla., also barely squeaked into the top 10 after backing up a one-fish opening day with more than 18 pounds on day two. Fitzgerald actually caught his first smallmouth bass ever in this tournament, and brown bass earned him a top 10.

“I grew up in Florida,” Kline adds. “My whole family lives in Florida. Trevor Fitzgerald was a longtime friend to my father. Trevor was a real inspiration as far as fishing goes, and my dad couldn’t believe the success I’ve had the last couple years in FLW. Well, my dad passed last year. He would’ve flown here for this weigh-in, I know it. What are the odds that we get matched up on the last day? Both of us limped into the top 10.”

More importantly, Kline also knew that Fitzgerald’s day-two co-angler, Buddy Hicks, had caught almost 17 pounds of smallmouths right alongside the Fitzgerald. So Kline knew he’d have a great shot at the comeback.

On the final day, Fitzgerald and Kline put on a smallmouth clinic using the 4-inch Basstrix. Kline had only randomly tossed a single pack into his bag, and the baits barely got him through the day.

“It was a true blessing that I put them in my bag, for one, and also that they lasted up until I had my limit,” Kline says.

The co-angler champ sealed the deal in the afternoon with a 4-pound smallmouth that dragged him around behind the boat, leapt from the water, bounced off the motor and one Power-Pole, and somehow stayed hooked – another blessing.

That fish bosted Kline’s tournament total to 25-3 and earned him a brand-new Ranger boat, motor and trailer valued at $40,000. 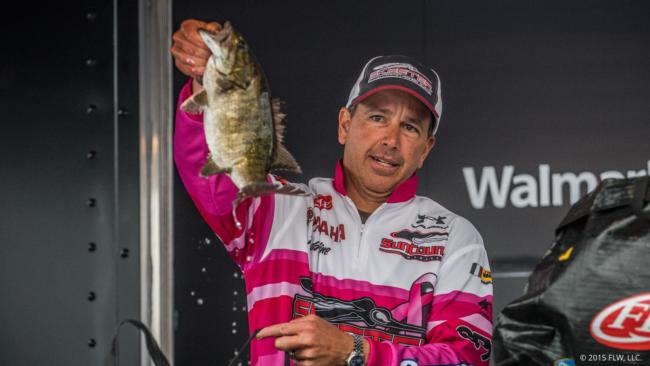 What’s Next for Kline?

Kline has certainly shown that he has the potential to be a full-time professional bass angler. But right now, he’s content to continue learning and competing from the back of the boat with FLW, and plans to fish some regional events as a boater. He currently has a busy international travel schedule as a host and TV analyst with the World Surf League, and those responsibilities occupy much of his time.

“I have great sponsors that support me at the level I’m at right now,” Kline says. “For me, I feel I’ve figured something out for the back of the boat. I’m fortunate. But when you go from the back to the front, there’s a lot more to see – you have to be aware of everything 360 degrees. You have to manage your fish. There’s a lot that comes into mind. At this point I’m having success, and I’m enjoying it. First and foremost, the whole reason I started fishing, and always will fish, is to have fun.”