Hanselman locks it down 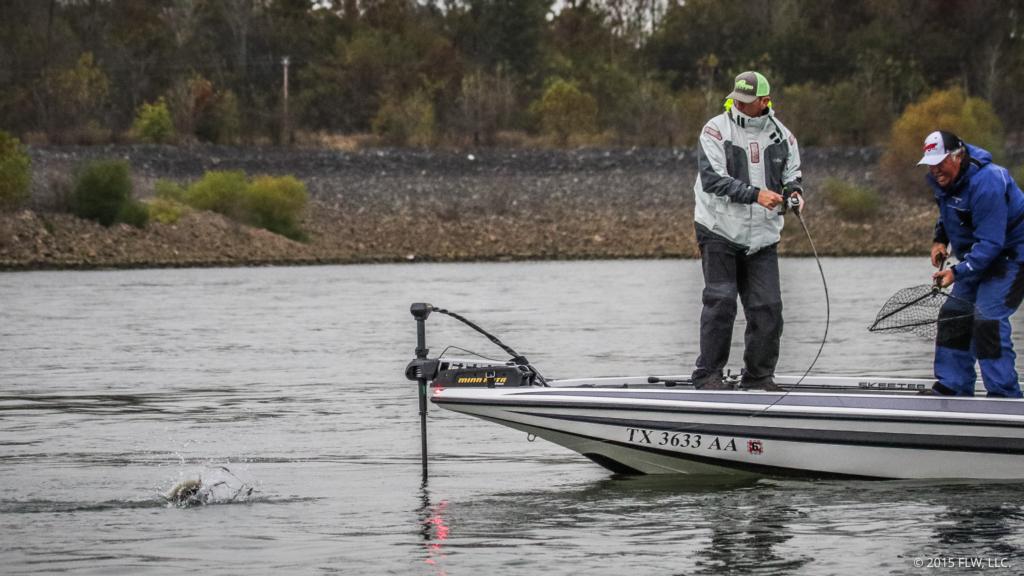 Trolling motor totally dead, Hanselman headed back to the ramp about 10 minutes ago. We’re all off the water too. The only thing left it to weigh ‘em up. Tune back here at 4 p.m. CT to see who walks away the winner and the newest qualifiers for the 2016 Forrest Wood Cup.

Even a wounded and slowed Ray Hanselman can catch ‘em. The Texas pro just caught a 4-pounder on his umbrella rig, culling a little smallmouth and pushing his weight easily into double digits. Turns out closing isn’t a problem for Hanselmania.

With only 2 hours left until check-in, a solid chunk of the top 10 has yet to limit. Both David Barnes Sr. and Brian Holder are still shy of a limit and still failing to make a run at Hanselman. Barnes has three in the box and Holder is running and gunning the bank with a crankbait to find his fifth.

Fourth and fifth place are also having a tough time. Tyler Suddarth has just two small ones and Brandon Perkins only has one mid-sized keeper. Based on the estimated weights, there’s some chance that one of them could fall to tenth and be the first man out of qualifying for the Forrest Wood Cup.

Hanselman’s batteries are definitely on the way out at this point (he thinks they didn’t charge fully because he got back late after day two). He’s moved into the slack water behind the lock at the Kentucky Dam and is junking it up. He’s pretty calm (as usual), but it’s got to be killing him to not be on his stuff.

Make no mistake; Ray Hanselman is still on track to win this thing. But to really blow it out and cinch it down against last-minute heroics from one of his peers he’ll need to pick it up a little.

Hanselman has made two moves recently and he’s now resorted to cranking the bank to try and supplement his 9-pound limit. His trolling motor batteries have let him down after hours of struggling against the strong current of the Tennessee River. If Hanselman truly can’t work his main-river stuff then there’s a barge-sized opening for someone else to crush a few and win it.

It’s slow going on the water right now – we haven’t had a bass caught for anyone in a while. That said, our crew has managed to find everyone in the top 10 at least once today and we’ve got some unofficial estimates ready.

Looking at the estimates, it seems like we’re destined to see movement, but everyone still has a ways to go to catch Ray Hanselman. Everyone gets off the water at 3:00 p.m. today, so it’s crunch time.

Ray Hanselman just put his fifth in the boat. He thinks his limit goes about 9 pounds. He’s got a way to go to lock things up (he lead over fifth place was less than 4 pounds), but it seems like he’s on track. Of course,  a few big smallmouths could change the game for basically anyone in the top five and there’s plenty of time left.

The weather has taken a bit of a turn. Though the rain has slacked off entirely, the temperature has dropped into the low 50s and the wind is freshening. We’re supposed to have a 12-mph south wind today – that might make things difficult when you combine it with the Tennessee River current. 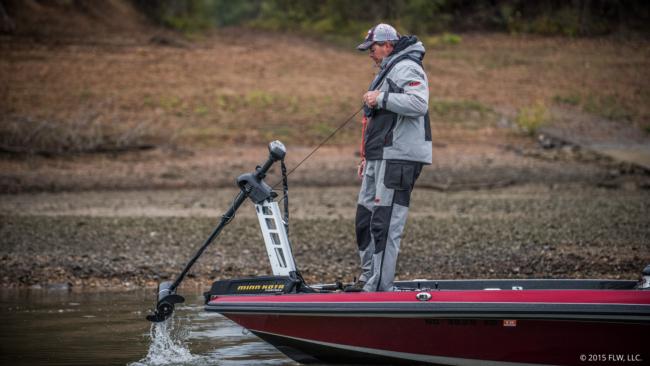 Brian Holder went out in third place and has spent the morning scrambling around the Tennessee River junk fishing. It just paid off a few minutes ago with his first keepers – two small ones back-to-back.

Hanselman has hit a pretty definite lull since his first couple hours, but he’s just swapped to a single swimbait and is headed back to his starting spot. David Barnes Sr. – Hanselman's closest competition – has three now. He's fishing a lot more spots than he did yesterday.

Also on the Tennessee River, Tyler Suddarth has a pair of keepers for about five pounds and Trevor Fitzgerald has filled his limit and likely as around 12 pounds in the box.

Up in the Smithland Pool on the Ohio, Bill Chapman has raised his weight to about 13 pounds, but things have since slowed a bit for him.

So, Bill Chapman is kinda cleaning up in Smithland – he’s got a limit for about 7 pounds and has caught five or six in the last 10 minutes. He might have a Dicky Newberry situation developing.

Meanwhile, in the Tennessee, Hanselman might be locking things up – he moved about 100 yards and just boxed a big one on the umbrella rig. That’s No. 4 and he’s definitely widening his lead.

Also in the Tennessee, Nick Prvonozac has one keeper and Trevor Fitzgerald is up to four for about 11 pounds. 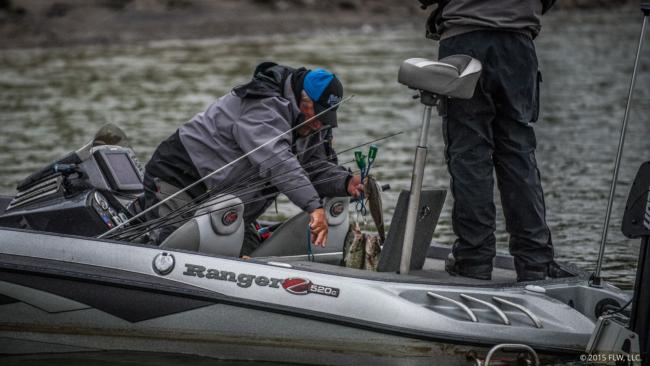 Denny Brauer has cranked up a small limit (and some magnum drum) right by the ramp. Up in the Smithland Pool, Bill Chapman has started strong with a 3-pounder he caught flipping.

On the Hanselman front, the Texas ace has caught two more – a surprising keeper largemouth and a solid keeper smallmouth. He was visibly relieved after he landed the smallmouth. Hanselman is basically hammering the same spot over and over, but he’s varying his cast angle a little each time – he throwing an umbrella rig with blades.

Hanselman just boxed his first of the day. It wasn’t a giant, but it jumped right in the net for him. His goal was three keepers today – what he felt would guarantee a Forrest Wood Cup berth.

Hanselman also reports that despite the water being a lot lower, the current is running almost the same as it was yesterday below the dam on the Tennessee. 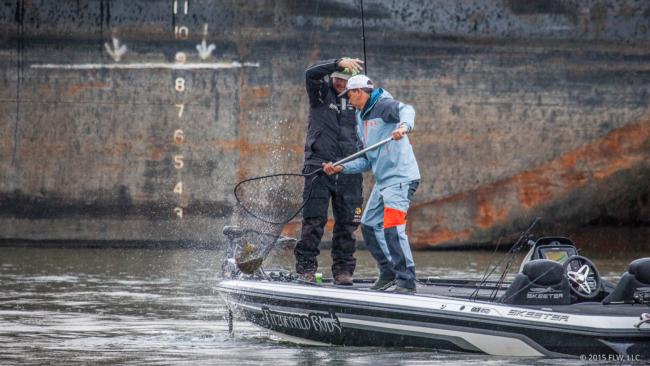 Ray Hanselman headed up to his spot near the Kentucky Dam and has started his day with an umbrella rig. So far he hasn’t hooked up, but he has the area to himself.

Further down the Tennessee River, David Barnes Sr. has a 2-pounder in the box already and nearby Trevor Fitzgerald has a pair of 2-pound smallies.

Additionally, Denny Brauer is stroking them right below the ramp – he’s on the Andrew Upshaw pattern this morning.

The final day of the Rayovac FLW Series Championship on the Ohio River will largely be fished on the Tennessee River, as all but two anglers rolled up it to chase smallmouths. This morning, with the water in the Tennessee and Ohio about 3 feet lower than it was yesterday, takeoff was delayed about five minutes because the ramp at takeoff was too shallow to launch at.

Weather-wise, its fairly warm and there’s a little wind and rain mixed in as well – nothing that should hold the top 10 back too much.