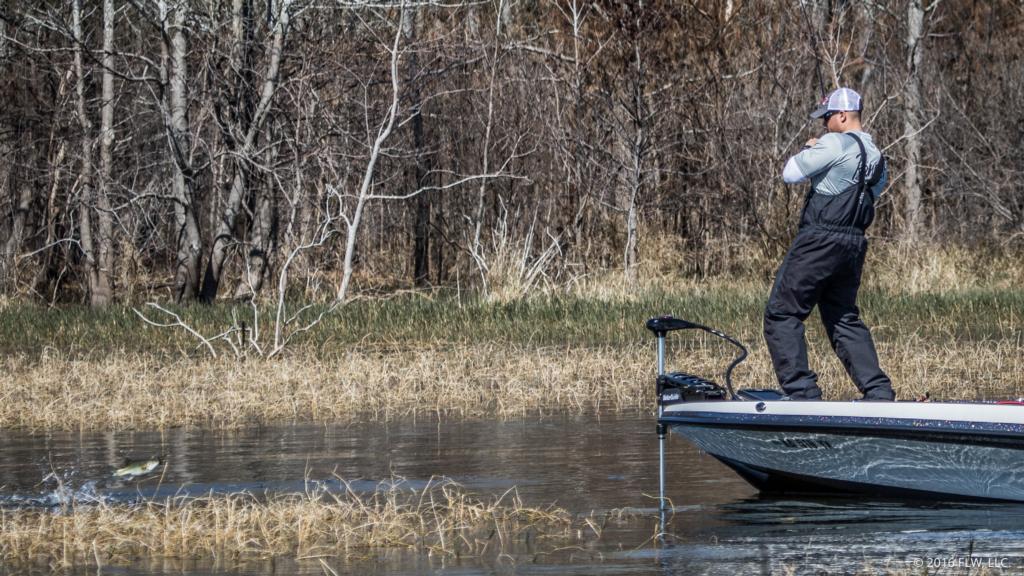 Post-frontal conditions were no problem for Montgomery, Texas, pro Kris Wilson, who topped day one of the Costa FLW Series event on Sam Rayburn presented by Mercury with 27 pounds, 10 ounces. Wilson targeted prespawn and spawning fish for the leading limit, and so did the rest of the top pros from day one. 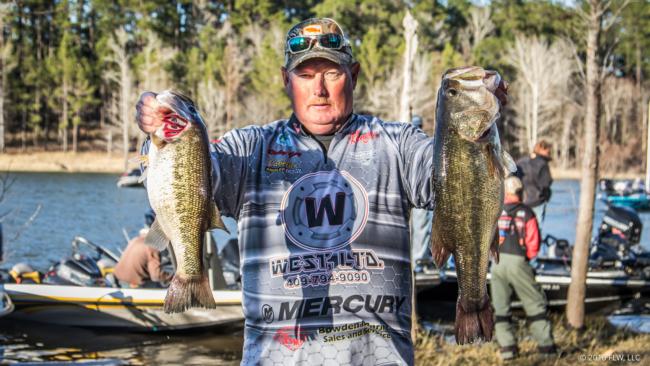 Ricky Guy entered day one intending to target prespawn fish, and, fortunately for him, the weather played into his plan. Guy rode that pattern to a day-one limit that tipped the scale at 25 pounds, 8 ounces to settle him in second.

Targeting creek channels near spawning flats, he found that the cold front that passed through on Wednesday pulled back the wave of fish that had recently moved up to the bedding zone.

“In practice, I was catching 2 1/2-pounders, but today I didn’t catch any 2 1/2-pounders; they were all females today,” Guy says. “I looked in practice and there were a few up, but they kept getting fewer and fewer.

“I quit looking for them and started trying to find prespawners. One of my fish was in the bushes, so she was probably on a bed, but the rest were prespawners.”

Guy notes that most of his bites came in the first half of his day. With the waning gibbous moon still bright in the sky, he surmises that most of the fish were eating early.

Working mid-lake to the upper lake, Guy targeted three main areas. His main bait was a Rat-L-Trap. Brown was his best color, and a particular tactic proved most effective.

“It’s a lot of work to touch that grass; you just have to fight through it. Normally, when you’re busting loose [from a snag], you’re getting a bite.” 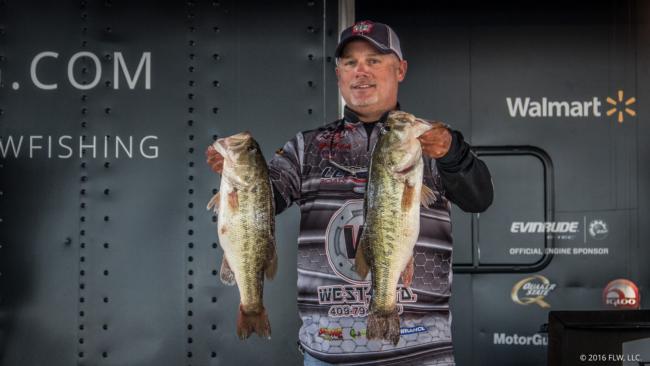 Texas pro Chris McCall found some “Trap” fish in practice and was delighted to find the week’s conditions setting up perfectly for him to capitalize on what he considers one of his specialties. McCall went to work during the opening round of competition to pluck 24 pounds, 3 ounces worth of bass from Rayburn, which put the local pro in third.

“The fish got so far ahead because it got so warm and it’s been warm for a while,” McCall says in reference to the balmy conditions preceding the cold front that arrived shortly before the tournament. “In February, my deal is throwing a Rat-L-Trap, and I was hoping that something would happen to push them out to where I wanted them to be.

“Yesterday [in practice] I caught an 8-pounder and a couple of 4s. I just found one big group of them, and that’s what I did most of the day.”

McCall says this week’s weather change was just what he needed to force a lot of the fish that had moved up to drop back to their prespawn staging areas.

“The weather cooperated with me when it cooled down and ran out those shallow fish that were staging out in front of those bushes,” he says.

McCall caught his fish in 4 to 6 feet. His color selection included red, shad and chrome/blue.

“I think the key is just knowing where they go,” McCall says. “Doing this as long as I have, you kind of know the little points and turns and the real intimate stuff.” 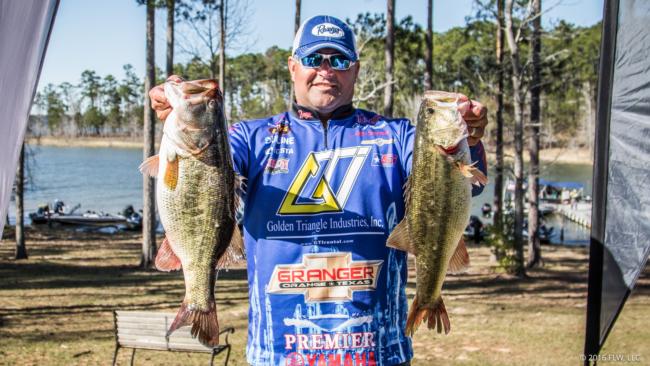 Starting his day with a 4-pounder gave Cory Rambo a good shot of momentum that he rode to the tune of a 23-pound, 9-ounce limit by day's end.

“I just started picking off 3-pounders,” Rambo recalls. “I probably culled 3-pounders eight times today. I had one big one, and that helped a bunch.”

Fishing the mid-lake region, Rambo targeted prespawn fish around a certain type of habitat — one that he’s been able to replicate throughout the lake.

“I can go anywhere on the lake and catch them, as long as I find what I’m looking for,” Rambo says. 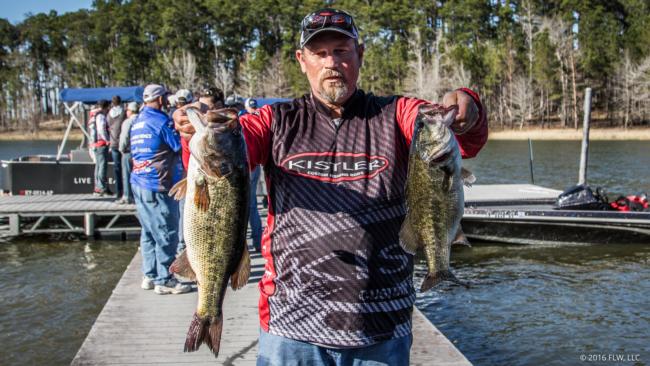 Despite mechanical issues at two different times today, Jerry Dubose still managed to put together a productive effort with a strong 22 pounds even to show for it.

Shortly after takeoff, Dubose experienced trolling motor problems. Then, on the way back, his battery died.

“But it all came together,” Dubose says. “God is good — He watched over us today.”

After making a big run north, Dubose flipped deeper bushes with grass. The day’s bright conditions helped moved the fish tighter into cover, where flipping jigs did most of the work.