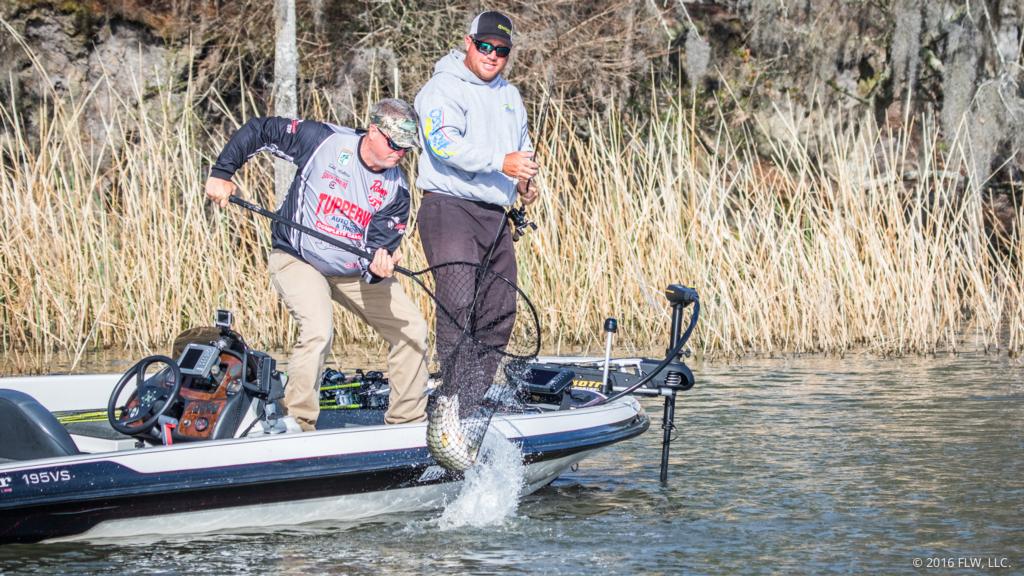 The timing of the Costa FLW Series event presented by Frabill on Santee Cooper March 10-12 was impeccable. The event landed dead on the biggest springtime warm-up of the season.

From practice until the last day of the tournament, the water temperature increased by 15 degrees. During that time hordes of big Santee Cooper bass moved from their winter haunts to spawning beds, and the entire tournament field was there to intercept them.

Bryan Thrift took the biggest advantage of the mass migration by running and gunning miles across both lakes (Marion and Moultrie; they’re connected by a canal) to pluck fish as they made their first move. While others tended to hunker down in one or two premium areas and wait on fish to funnel to them, Thrift chose to run dozens and dozens of premium spots, sampling each one for just a few minutes to pluck the low-hanging fruit before moving on to the next area. Thrift’s plan worked to the tune of 79 pounds, 15 ounces worth of bass over three days and more than $93,000 in winnings.

Here is a look at how the rest of the top 10 fared. 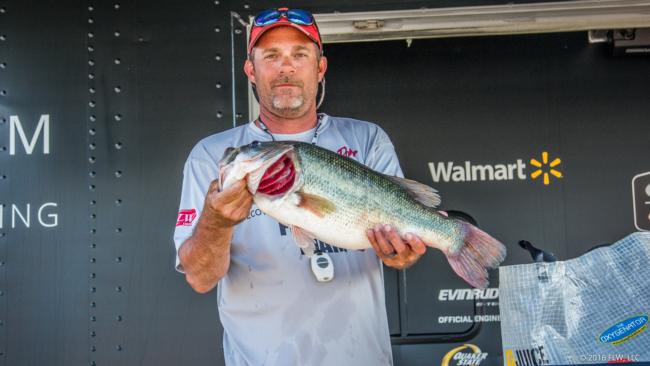 Pat Fisher of Colbert, Ga., brought in a steady flow of mid-20-pound bags for three days to finish second with a three-day total of 76 pounds, 2 ounces.

Fisher spent his week fishing trees in the northern end of the lower lake. Of all the techniques in the top 10, Fisher’s was one of the most unique thanks to an innovative new jighead that was poured by a friend. The head is something like a heavy-cover version of a Flick Shake with a stout hook and a bristle weedguard.

“A friend of mine poured these for me and told me to try them when wacky rigging these trees down here,” Fisher explains. “I had never fished it before in my life until this week, and the thing is pretty awesome. I just put a 6-inch Bass Pro Shops Stik-O on there, and it skipped perfectly up under those trees. The weedguard on it works great.”

Fisher skipped the heavy-cover wacky rig on 17-pound-test fluorocarbon line. He fished it on a 6-foot, 9-inch Big Bear medium-heavy rod. The shorter rod was beneficial in skipping up under the low-hanging tree limbs.

It helped that Fisher was in the right area where big females were coming up from nearby deep water to spawn on the trees. His key area featured about 50 trees total, and he notes that there were a couple of trees that always had bass on them. 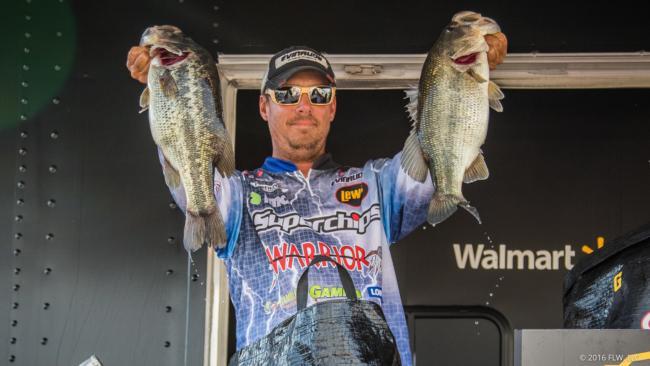 3. Browne pitched in “the swamp” for third

After sacking up two limits in the low 20s the first two days, Glenn Browne of Ocala, Fla., made a charge on the final day with a 27-pound, 4-ounce catch that put him in third with a three-day total of 71-3.

Browne spent his event fishing in Santee’s legendary “swamp” area, flipping numerous trees in the flooded timber with a 1-ounce jig teamed with a black and blue Zoom Big Salty Chunk. He fished the big jig on 65-pound-test Lew’s braided line. When he encountered any kind of matted “junk” blown up against the trees, Browne punched it with a Gambler Why Not dressed with a punch skirt on a Reins 1-ounce TG Punch Shot weight (all black/blue), also using 65-pound-test Lew’s braid.

Browne also caught a couple of weigh fish the final day by skipping a Gambler Sweebo worm (green pumpkin) to trees with a spinning rod. 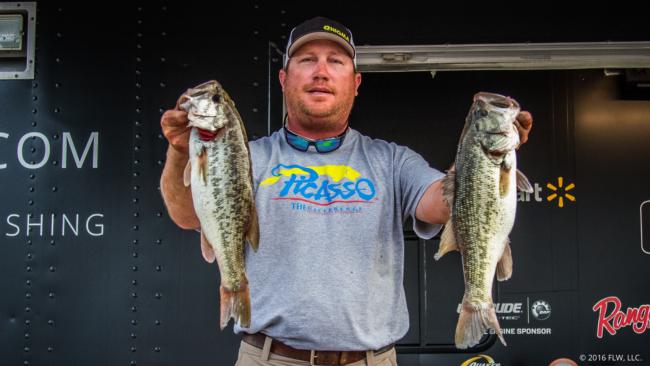 4. Dortch clings to blade for fourth

Bradley Dortch of Bay Minette, Ala., sacked up 29 pounds, 9 ounces on day one and led after day two, but he eventually fell to fourth on the final day with a three-day total of 70-14.

All week Dortch remained committed to a 3/8-ounce Picasso spinnerbait (white) teamed with a NetBait BK Swimmer swimbait as a trailer. He fished the spinnerbait on 15-pound-test Berkley Trilene Big Game line.

Dortch found a pile of fish in an 8-foot-deep ditch in the hatchery area and followed them up onto the flats as they migrated up to spawn.

“When I caught fish from the ditch in practice, they were clean and white,” Dortch says. “And when I caught them from the adjacent flat in about 2 or 3 feet of water, they were colorful and beat up from spawning. I’m pretty sure they were funneling into that ditch and up onto the flats by the day.”

Dortch says sunlight was critical in being able to see stump clusters on the flat so he could pole down and really saturate the stumps with multiple casts from different angles with the spinnerbait.

When low clouds and fog came in on the final morning, he had to resort to a NetBait Salt Lick worm for a couple of hours until the sun got up high enough to see the stumps so he could attack them with the spinnerbait again. 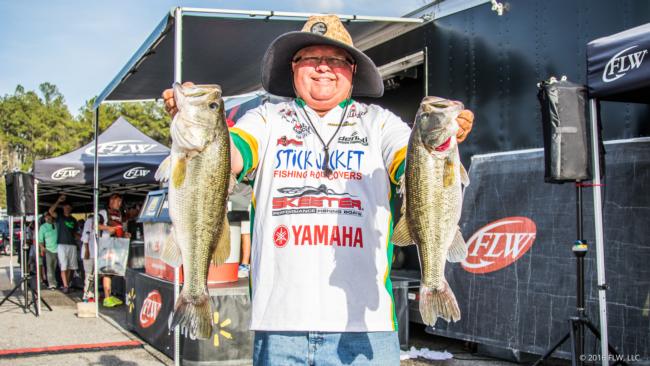 Preston Clark’s biggest bag of the week came on day two when he weighed in 27 pounds to help amass a three-day total of 69-2 for fifth place.

He spent the week punching isolated mats of hyacinths, vines and duckweed in the Pack’s Flats area of the upper lake. His primary punching bait was a Bass Assassin Jingle Bug (black/blue) with a 1-ounce tungsten weight fished on 65-pound-test braid with a 7-foot, 11-inch Denali flipping stick.

“Once I got a limit, I would put a punch skirt on the Jingle Bug for a bigger profile,” Clark says. “I figured it might help me get some bigger bites, and I’m pretty sure it did on the second day.” 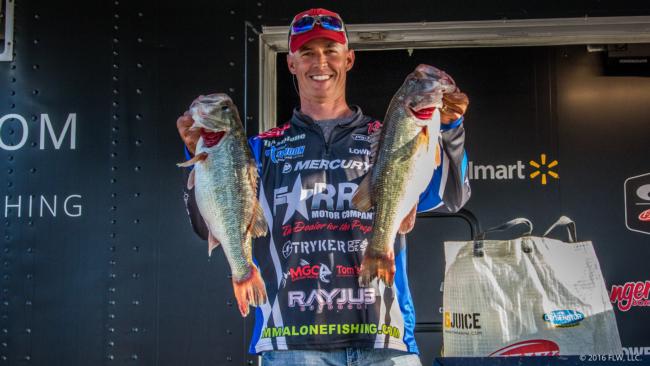 Tim Malone’s top bag of the week came on day one when he weighed in 26 pounds, 5 ounces. On day two he moved to second place with a 23-10 limit, but Malone fell to sixth on the final day with four fish for 11-1. His three-day total was 61 pounds.

Malone dedicated his entire week to roll-casting- a 3/8-ounce BOOYAH spinnerbait (chartreuse) around cypress trees in the swamp. He used a shorter 6-foot, 6-inch medium-action casting rod with 50-pound-test braid to backhand cast the spinnerbait around the backsides of tree bases.

“The fish were spawning around those trees, and I had to make the exact right cast to get them to eat the bait,” Malone says. “Sometime the fish would just flash or swipe at the spinnerbait blades, and if I kept making that cast I could eventually get her to eat.”

If Malone could not get the fish to bite again, he would remember the exact lane where the fish was positioned, move his boat around to the other side of the tree cluster and pester the fish with the spinnerbait from a different angle. Malone says that was a key in getting a few of them to commit.

He tried a slower soft plastic as a follow-up bait on some of the fish, but it never worked. Once he got in the rhythm of roll-casting the spinnerbait into narrow lanes and under branches and moss, Malone says he just preferred to stay with the spinnerbait. 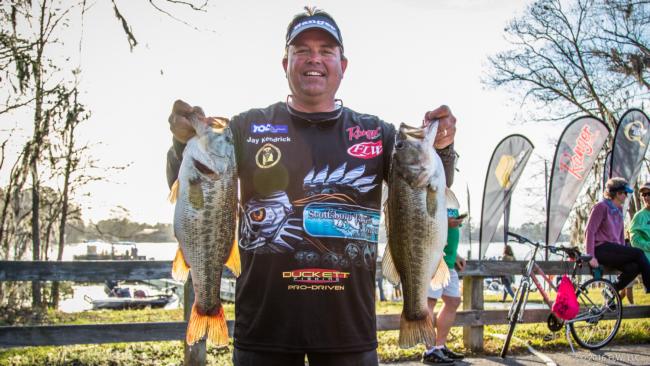 7. Kendrick fished a worm for seventh

Jay Kendrick of Grant, Ala., finished seventh with a three-day total of 57 pounds, 9 ounces.

Kendrick spent most of his tournament time in the Rocks Pond area of the upper lake skipping a Zoom Trick Worm on a 1/16-ounce Scottsboro Tackle tungsten weight to isolated trees. He used green pumpkin when the water was clear and resorted to junebug with a blue tail when it was stained.

“Each day I had to fish trees that were farther and farther back in the pockets,” Kendrick says. “I started on point trees the first day and then sort of followed the fish to the backs of the pockets the last day. But no matter where I was, a tree had to have 3 feet of water on it for me to get bit.”

Kendrick also notes that the fish would not always be directly on the trunks. Sometimes he would get bites 8 to 10 feet away.

“I think a lot of times they spawn on all those knee clusters that spread out on the bottom,” he adds. “I would work each tree 360 degrees all the way around, and the bite might come from anywhere.” 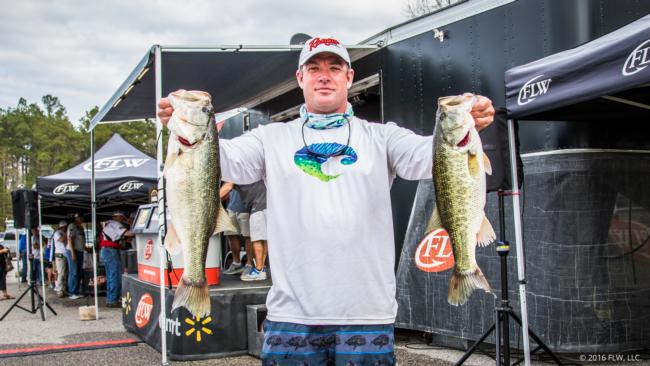 Todd Smith of Summerville, S.C., finished in eighth place with a three-day total of 56 pounds, 9 ounces.

Smith fished the hatchery area with what he called a one-two punch combination. The first was a 3/4-ounce D&M Sniper Triple Threat Spinnerbait (white/chartreuse) with three willow-leaf blades. He cast the Triple Threat around the corners of reed islands, trying to contact the reed points and corners with the spinnerbait to draw a strike. If he noticed a hole in the reeds or a matted clump, he employed the second part of his combination: punching with a Reaction Innovations Sweet Beaver (green pumpkin) and a 1/2-ounce tungsten weight. He fished the spinnerbait on 20-pound-test P-Line fluorocarbon and the Beaver on 25-pound-test fluorocarbon. 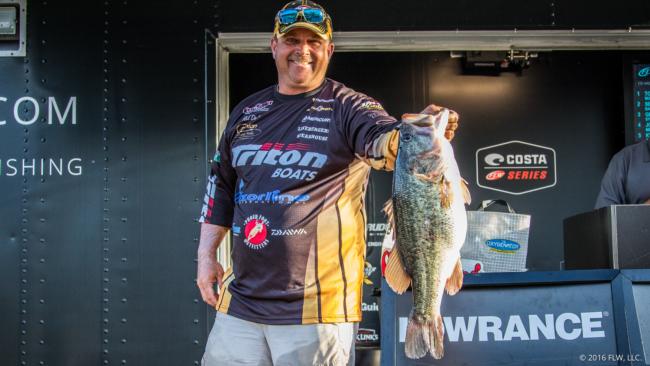 Rob Digh of Denver, N.C., brought in a whopping 32 pounds, 1 ounce on day two, which propelled him into the top 10. He eventually finished ninth with a three-day total of 52-13. 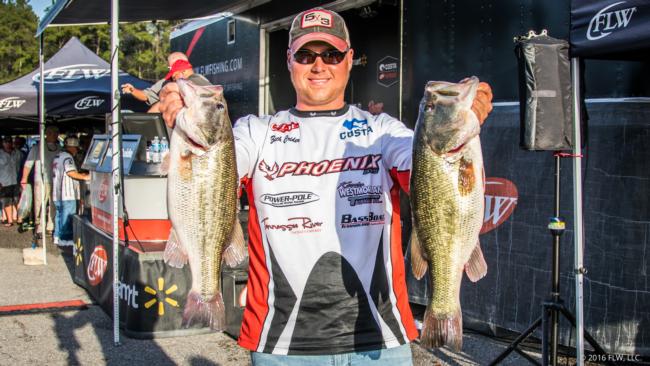 Zach Crider of Tunnel Hill, Ga., rounded out the top 10 at the Costa FLW Series on Santee Cooper with a three-day total of 49-15

Crider’s primary gig all week was swimming a Zoom Mag Ultravibe Speed Worm (junebug) with a 1/4-ounce weight around reeds in the lower lake.