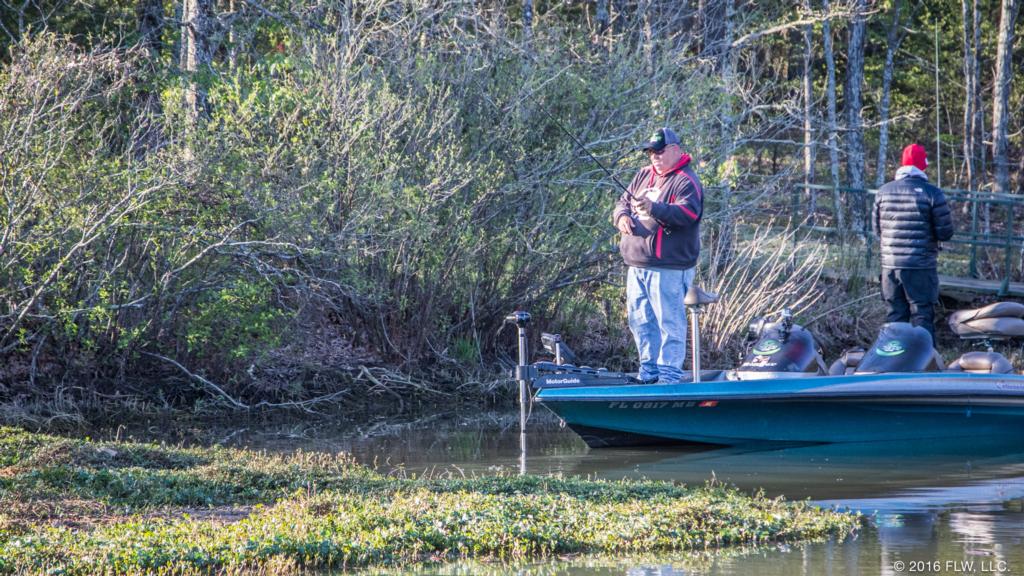 Water level was a constant concern for anglers in the Costa FLW Series Central Division opener presented by Mercury on Lake Dardanelle, as the U.S. Army Corps of Engineers had been pulling down the lake level to manage the influx from recent heavy rains. A severe storm dumped a couple of inches on the area a day before the tournament, so the ups and downs, along with resulting murkiness, presented significant challenges.

Complicating matters, the event saw a broad range of weather, from mild and sunny to cool and overcast, and even thunderstorms and then the dreaded post-frontal bluebird conditions on the final day.

Floridian Jeff Fitts overcame significant adversity to pull off an amazing comeback victory with 48 pounds, 10 ounces. After struggling with a meager day-one catch, Fitts experienced mechanical trouble the morning of day two. Limited geographically, he limped into a couple of pockets, where he found the kind of grass mats he fishes in his home state. Putting his punching skills to work, Fitts sacked up the event’s heaviest sack (23-15) on day two and then followed with a strong final-round catch of 17-4.

Read more about Fitts’ win here. Other finalists applied their own strategies. Here are the details on their patterns, as revealed after the final weigh-in Saturday. 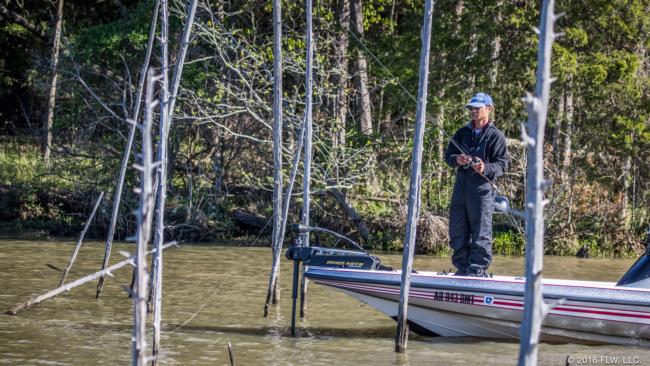 For the first two days, Daniel Kweekul paid close attention to his casting angles, because bringing his baits past shallow wood targets with the natural current direction was critical to effective presentations. On day three, that priority took a backseat to simply coaxing bites.

Fishing within 10 minutes of the takeoff site at Lake Dardanelle State Park, Kweekul displayed great consistency with 16-7 on day one and 16-10 on day two. He caught a solid 14-13 on day three when he says the fish showed noticeably less aggression.

For two days, Kweekul had been throwing a swim jig and following up with an unweighted Texas-rigged Yamamoto Senko. Both produced fish, but in the final round, the latter took precedence.

“As the day progressed, the fish were wanting a Senko more than a swim jig,” Kweekul says. “They were nipping at the swim jig, but they weren’t eating it.” 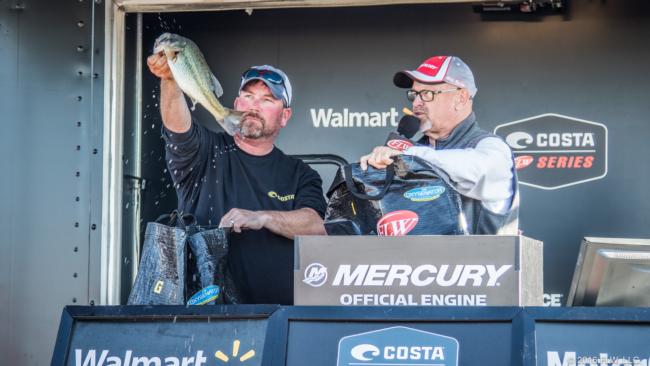 An Arkansas River standout, Teddy Bogard had a specific plan, and by sticking with his habitat preference he kept himself in position to fare well for three days. Turning in bags of 14-4, 17-1 and 15-11, the pro from Pine Bluff, Ark., notched a third-place finish with an even 47 pounds.

“My pattern was running pockets with pad stems and fishing for spawning fish,” Bogard says. “Those fish were spawning in the pad stems.”

Bogard ran about 20 miles from takeoff and fished upriver near Spadra Creek. There, he looked for areas with off-colored water. The fish in these areas of lower visibility were less spooky and therefore more tolerant of his presence.

Of course, spotting fish in the muddier water was a tough task, so Bogard covered likely areas with a ChatterBait. He rigged his reaction bait with a sapphire blue swimbait. 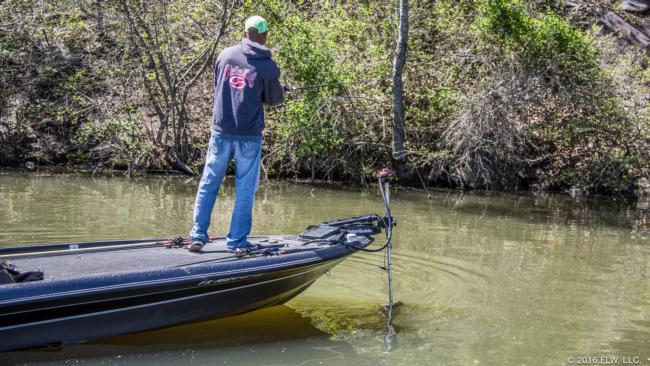 After leading the event for two days, Todd Castledine saw his hopes for a sweep stolen by the cooler, high-pressure conditions of a front’s passing. Targeting a narrow backwater off Illinois Bayou, the Texas pro sacked up 22-3 on day one and followed with 15-14 the next day. The final round saw him struggling for bites, and ultimately he’d settle for two keepers and a fourth-place finish.

Castledine did most of his work with two key baits – a black neon Strike King tube Texas rigged on a 4/0 hook and the new Strike King Poppin’ Perch, which he helped design. As for presentation particulars, Castledine says that making long casts and working the tube methodically gave him the best chances of engaging fish without spooking them in the clear water he was fishing.

“Slow, horribly slow, worse-than-slow, deathly slow, I can go on and on,” Castledine jokes about his presentation. “I’ve never seen anything like that before – how slow you had to work it. Up on the bank there were little key stretches, but it didn’t matter. If you didn’t work it slowly, you weren’t going to get bit.”

On the final day, Castledine committed to throwing the topwater all day after three quick morning blow-ups that produced one of his keepers, and knowing the Poppin’ Perch’s potential for producing big bass. Unfortunately, the post-frontal conditions shut down the bite, and he didn’t adjust until too late. He caught an afternoon keeper on the tube with just 40 minutes left to fish and didn’t have time to fully apply it to his two go-to areas. 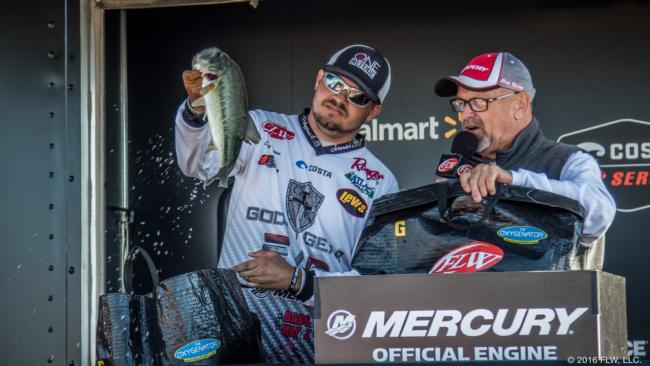 Not pleased with his 9-pound, 13-ounce effort on day one, Evan Barnes regrouped, refocused and sought divine guidance. The result was a big day-two catch of 18-7 that moved him up from 64th place to 10th. Adding 16-8 in the final round gave him another boost, this one good enough for a fifth-place finish with 44-12.

“After day one, I sat down and started praying, and I told God, ‘I don’t want to fish on my own power anymore. I want to fish on your power,’” he says. “If you ask God to help you, He will.”

Barnes says he had been catching fish on a Strike King KVD 2.5 Square Bill, but after pressing the reset button, he kept a 3/8-ounce JIG-SOOIE Evan Barnes signature-series finesse jig in his hand the rest of the tournament. The jig color was Arkansas craw – a custom pattern blending traditional Missouri craw and green pumpkin candy.

“I was just hopping that jig down the edges of rocks,” Barnes says. “They were absolutely smoking it.” 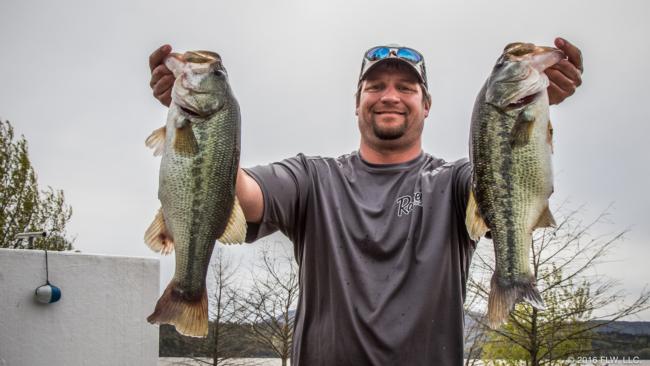 Dock talk bespoke the likelihood of Zach King making a big day-three move after running upriver to the pristine, bass-laden backwaters of Spadra Creek near his Clarksville home. He made the run, but the day took a profoundly different turn, and King ended up with a three-fish bag that went 9-4.

“I had a bad accident this morning while trying to get into a spot, and I ran up on the bank,” King told the weigh-in crowd Saturday. “We had to get out and push the boat free, so I called Ron [Tournament Director Ron Lappin] to clarify that it was OK to do so.

“I was a nervous wreck after that, and it kind of spun me out. I fished a couple of spots and caught a few fish. I never could get it going until right at the end, but I just didn’t have enough time.”

Throughout the week, King targeted spawning bass with a Texas-rigged Junebug-colored Zoom Lizard and an unweighted Senko. He ended up catching his final-round fish on a 5/16-ounce War Eagle spinnerbait and an XCalibur Xr50 lipless crankbait in Rayburn red. 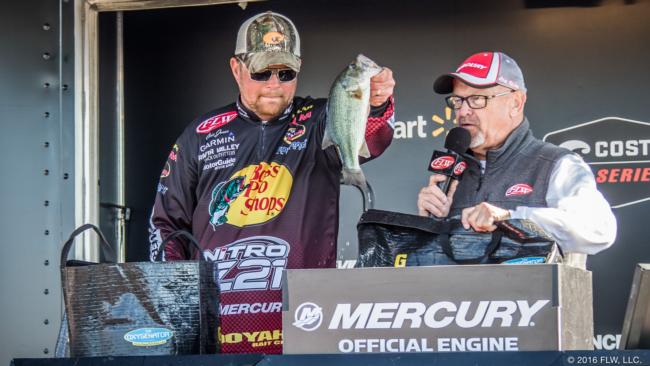 His plan was ambitious and ripe with potential, but Chris Jones’ fate was ultimately decided by access. On day three, he made a big run to some of the sweetest Arkansas River spawning habitat in hopes of reaching a couple of pockets with treacherous openings.

The bounty of shallow spawning habitat was worth the risk, in his view, but on this day, it wasn’t meant to be, as water level issues stymied his efforts.

“I was running 40 miles to a couple of the backwaters up there,” he says. “They turned the flood gates on, and my area actually got higher, but there was so much water coming out that I couldn’t get through the blowholes in the jetties and couldn’t run them because of the rocks.

“I backed up two or three times on one of them because I really wanted to get in there. But something told me not to risk it.”

Turning to nearby alternates, Jones managed four keepers for 8-1. Throughout the week, he caught most of his fish by buzzing laydowns with a vibrating jig carrying a YUM Pulse swimbait. He’d also slow down and flip the cover with a Texas-rigged YUM Christie Critter and a YUM Lizard around laydowns. 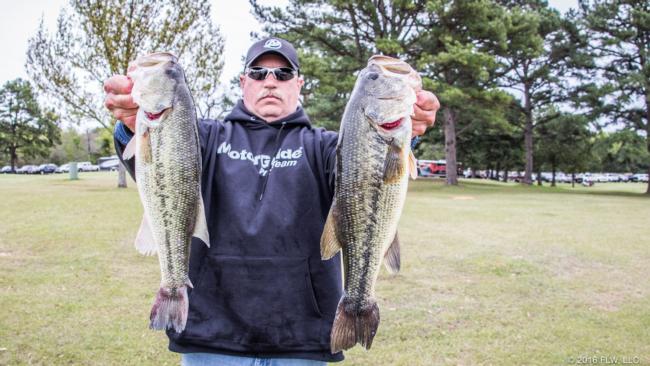 On day one, Missouri pro Greg Jones identified a consistent bite along the deeper edges of riprap adjacent to bridges. Running a Rapala Shad Rap through the 6- to 8-foot-deep zone did the trick on days one and two, but the final round saw that deal waning. Jones surmises that the post-frontal high pressure, along with heavy fishing pressure, put the fish in a negative mood.

“I still got my bites, but they were really finicky because of the high pressure,” Jones says. “These fish have also been beaten up for several days, and I was starting to run out of fish.”

Abandoning the Shad Rap, Jones caught his day-three fish on a Texas-rigged tube. He used a 5/16-ounce weight and a 4/0 flipping hook. Top colors were black/blue flake, black/green flake and black/red flake. 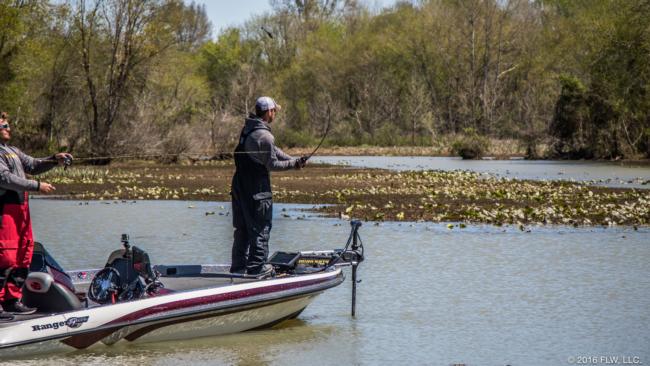 The Kirkwood, Mo., pro had a strong performance on days one and two, but his final-round opportunities fell victim to declining water level. Limited by conditions, Joe McClary managed only one keeper for 2 pounds, 3 ounces.

“The first day, I caught a couple sight-fishing and a couple punching, but I found a deal on day two way back in some lily pads,” McClary says. “I probably caught 12 to 13 keepers and had one that was 6 pounds.

“I went in there on day three, and you could have walked across the area – there was no water,” he adds. “I didn’t have a fall-out plan, so I just went fishing and stumbled across one.”

McClary’s lone day-three keeper ate a swim jig with a small swimbait trailer. The light trailer was important for keeping his bait high in the water when fishing shallow cover. 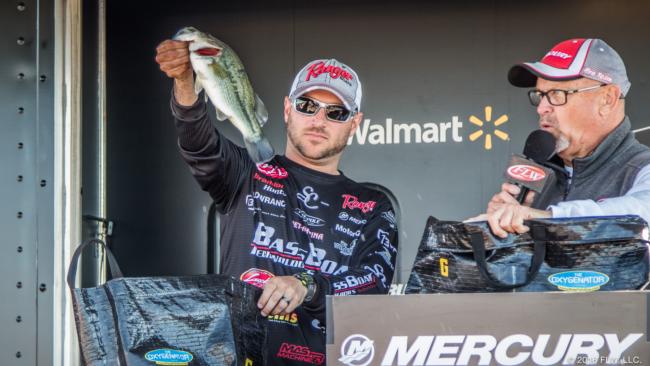 Coming into an event without at least some measure of an established pattern is always a tough deal, but Kentucky pro Brandon Hunter took that scenario and scratched his way to a 10th-place finish with 31-14.

“I didn’t really have anything going this week,” Hunter says. “I just went fishing. You can fish comfortably without nerves after you’ve had a bad practice.

“I think a lot of guys who caught ’em had areas where the fish were pulling up into. But in the area I was fishing, the water was falling, the temperature dropped four degrees the night before the final day, and it got beat up between practice and the first day.”

Hunter caught most of his fish on a Lucky Craft LD 1.5 DD crankbait and a Nichols spinnerbait.