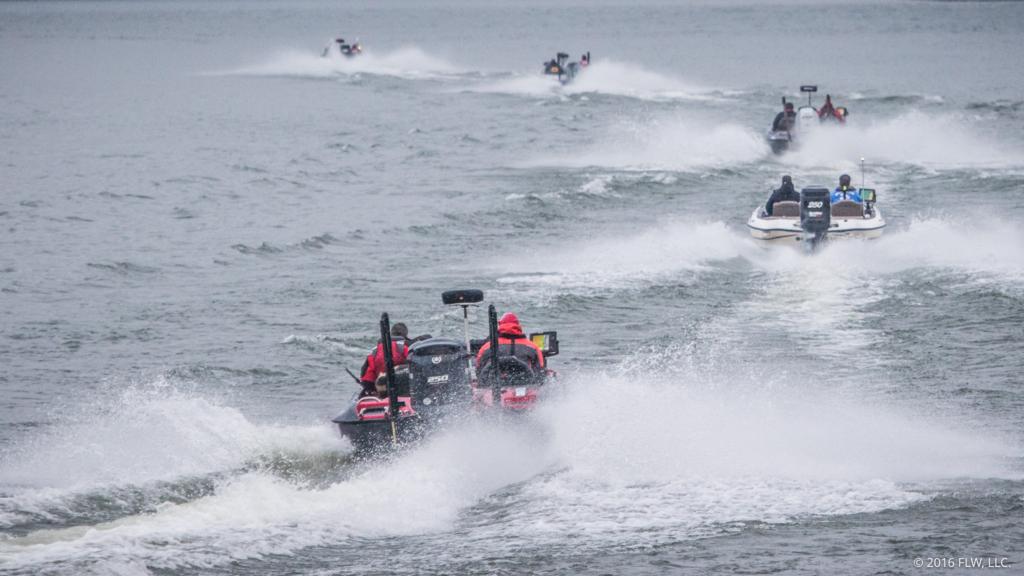 There are a lot of questions yet to be answered today at the start of the Costa FLW Series Central Division event presented by Lowrance on Kentucky Lake, but as of right now it seems like the answer to the biggest question – How will this event be won? – will not be ledge fishing.

The spawn is underway on this mega-sized Tennessee River impoundment that sprawls across the old river bottoms in west Tennessee and Kentucky. A recent bout of storms and the slightly earlier-than-normal timing of this event have 209 pros scratching their heads a little bit – not about how to catch fish (there’ll be a lot of limits at weigh-in for sure), but about how the winning fish will be caught.

Right now, there’s no consensus on what is the best pattern on the lake. It’s also really hard to pin down a tournament favorite. Most of the best-known locals have earned their hardware in major events during the summer ledge season. With thousands of acres of primo shallow bays to fish and more bass reaching the bank daily, this tournament is anyone’s to win.

Today is forecast to be sunny and warm, so everything from sight-fishing to cranking could be in play. Here’s the breakdown.

Kentucky Lake is the last impoundment of the Tennessee River before the river flows into the Ohio. It’s a mostly shallow reservoir that spans some 160,000 acres, providing all 209 pros and their co-angler partners with ample space to spread out.

Though it’s known for its river ledges, herds of offshore bass and one of the most exciting postspawn bites in the country, Kentucky is also packed with shallow cover: flooded bushes, various types of bank grass, hydrilla, laydowns for days, legendary stump fields, riprap, cypress trees and knees, and more. These shoreline targets, plus small creeks and cuts and vast spawning flats, are filling up with bass.

The forage base includes gizzard and threadfin shad, bluegills, crawfish and other smaller game fish. Water clarity varies by area from less than a foot to several feet of visibility, though most of the reservoir has that “Tennessee River green” that’s just dirty enough to crank and just clear enough to throw a swimbait.

Current flow is a major factor on the Tennessee most of the year, though in the spring it’s much less critical. More important is the water level, which was at 358.95 around the time of the registration meeting last night. That’s a couple of inches lower than when anglers hit the water in on Wednesday morning for the final day of practice. About 359 feet is normal for summer pool, and another 6 inches to a foot on top of that would absolutely change the tournament by flooding more bushes and shoreline cover, though that’s not likely to occur in the next few days.

Conditions aren’t far off from normal for a late April tournament on Kentucky Lake, though the water and air temperatures are a few degrees behind historical averages. Pros reported mid- to upper 60s for water temps in some areas and up to the low 70s in others.

Today’s forecast calls for partly cloudy skies with a 20 percent chance of rain, a low in the mid-50s and a high of 82. Westerly winds at 11 mph shouldn’t cause many headaches for navigation on what can be a treacherous lake at times.

Last night, the western Kentucky and Tennessee region was swept by a couple of quick summery thunderstorms. More of the same might roll in late Friday and throughout Saturday’s final round, bringing slightly lower high temperatures and daily wind changes. Pros will need to be adaptable in this derby.

You name it, and it’s probably happening at least on a small scale on Kentucky Lake right now. The biggest issue is that the fish are in transition, and they’re not really doing any one thing. Typically, Kentucky Lake’s bass don’t waste much time moving up to spawn, then getting the heck out of Dodge and setting up offshore. They move in large waves. Pros who prepare with foresight and predict where the bass will be come tournament time usually do well in these late spring derbies. Consensus right now is that the fish aren’t so predictable. Only a few are postspawn, and new spawners are showing up daily. But the fish are still very scattered.

Texas pro Todd Castledine is known as a sight-fishing and frog-fishing expert, and he’s hoping to do a little of both this week.

“I was told it can’t be won sight-fishing, but I don’t know. I think that’s more of an opportunistic thing. I’ve got a couple found though,” he says.

Locals Ramie Colson Jr. and Terry Bolton, both Kentuckians who fish the Walmart FLW Tour, are among the contingent wishing the water was up just a bit more. They’re both bush-flipping experts who probably understand that pattern on Kentucky Lake better than most. With the water holding right at “full pool,” they’re changing things up a bit and hunting a shad spawn bite and a mix of staging and spawning areas on the bank.

Several other pros reported the same thing. They have a bank or two where they’ve found some fish. Some of those banks are spawning areas; others hold schools of prespawn bass. It’s not really a pattern, but an area-oriented approach.

Depending on the weather, this tournament could see the start of topwater season. Otherwise, swimbaits, swim jigs and ChatterBaits will be the baits of choice for covering water up shallow. Texas rigs and jigs are dynamite for flipping, and shallow bass will eat up a simple wacky-rigged worm. For staging fish, Texas rigs, Carolina rigs, shaky heads, swimbaits and crankbaits will probably get a lot of use.

To be sure, pros aren’t expecting a slugfest of a tournament. At least not like we’d have seen if the tournament was two or three weeks later, as it was in 2015. Last year, Tom Redington headlined a top-10 crew of ledge experts who enjoyed the benefits of fresh, eager-to-bite postspawn bass arriving right to their best ledges as the tournament progressed.

Last year’s offshore success motivated a lot of pros in the field this year to spend practice hours idling offshore in search of that first school. Redington was among that crew, but he hasn’t seen enough activity to think the ledge pattern will be a factor this week.

It really just seems like the fish are in a bit of a spawning funk. Marcus Sykora, the former FLW Bass Fishing League All-American champ, says a lot of fish pulled up while the lake was still in its winter drawdown, and many are now bedding in “yellow flowers” that are covered by water. Yet the water isn’t high enough for the killer bush bite to kick in. It’s a challenging scenario that has many pros predicting weights in the mid-teens being good enough to make the top-10 cut.

Local hammer Sam Lashlee agrees. He’s a favorite no matter the season, but says he didn’t get a bite on Wednesday.

“I’ve never seen the lake this tough in April,” he says. 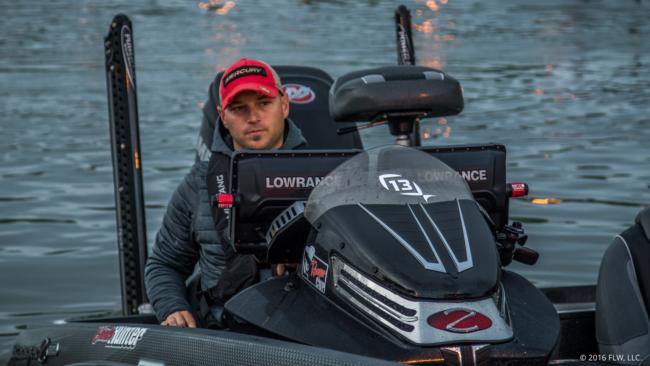 Water level – If it comes up, we could see several shallow patterns turn on quickly.

An eye on the ledges – It seems that the ledges turn on earlier and earlier each season – or maybe pros have just started graphing ledges much sooner. Right now, that doesn’t seem to be the deal. However, it’s not a bad strategy to target an early limit shallow and then spend at least a little time in the afternoon checking some offshore spots. Once a few fish show up offshore, more are usually right behind them.

The sight bite – There are a lot of bass on beds, and according to Bolton, Kentucky Lake keeps getting clearer, which suggests that maybe we could see a multi-day tournament won sight-fishing. Has that ever happened before on Kentucky Lake? Probably not, but it would sure be interesting to see how bed-fishing experts like Castledine approach it. He says the spawners here don’t act like “normal” spawners that he picks on in Texas. They’re very skittish. He’s going to give them a shot though.

A couple of local favorites we spoke to on Wednesday said they were cramming in every last minute of practice time before the registration meeting, whereas they’d normally call it quits around lunchtime to leave time for final tackle prep. This is pure speculation, but their need to stay out later suggests that things are pretty tough out there, and that traditional patterns might not be firing. It also suggests that we’ll see some new faces in the top 10 – out-of-towners or anglers who can’t typically hang with the local ledge experts.

Redington, who’s one of the top ledge anglers in the game for sure, jokingly said that a good barometer of the fishing will be Randy Haynes’ day-one stringer. Haynes is the undisputed world champion of ledge fishing. If he cracks them, then everyone will know that the ledges are loading up. While Redington was kidding to some degree, he’s probably right. Haynes could find ledge fish in Florida, and if there’s a postspawn school on this lake, he probably knows where it is.

Finally, there’s a major two-day tournament going out of Kentucky Dam State Park this weekend that reportedly has a 180-plus-boat field. In a ledge tournament, that would make for crowded offshore fishing. We’re predicting that most of the field in the FLW Series event will be in the back halves of the creeks, so crowding isn’t too much of a concern. Yet, several pros have decided not to run north from Paris to avoid the extra fishing pressure. It looks like there’s a good chance the south end of the lake will be the hot zone this week.