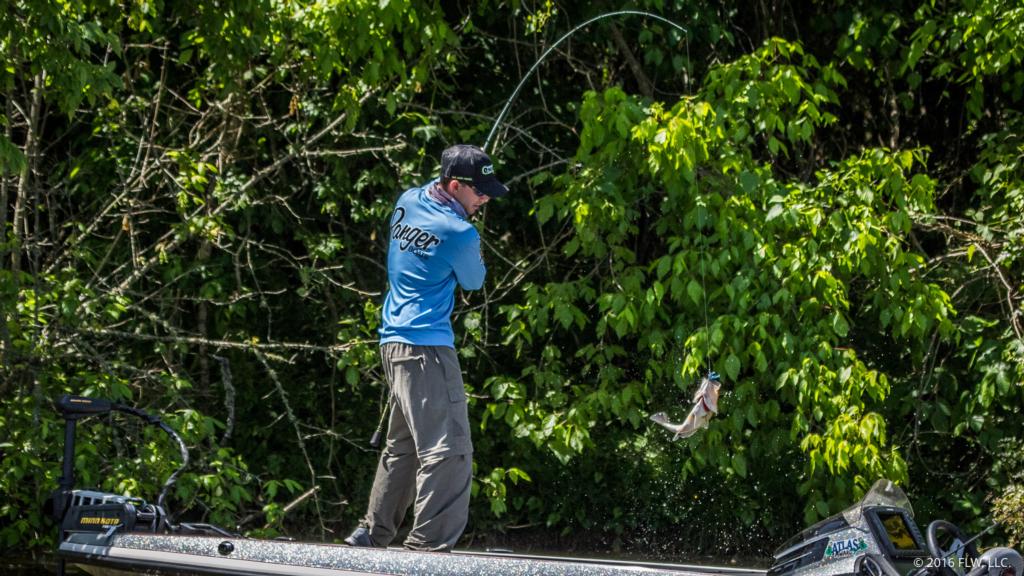 Bradley Dortch of Bay Minette, Ala., won the Costa FLW Series Southeastern Division event presented by Mercury on Wheeler Lake by catching postspawn bass that were leaving spawning pockets and funneling into the main river.

As it turns out, the Elk River was a popular place among the top 10 finishers. Some bass were still spawning in pockets up the Elk, where the water is generally cooler than in other parts of the lake, and an intermittent shad spawn was occurring as well. Here’s a closer look at how the rest of the top 10 fished at Wheeler. 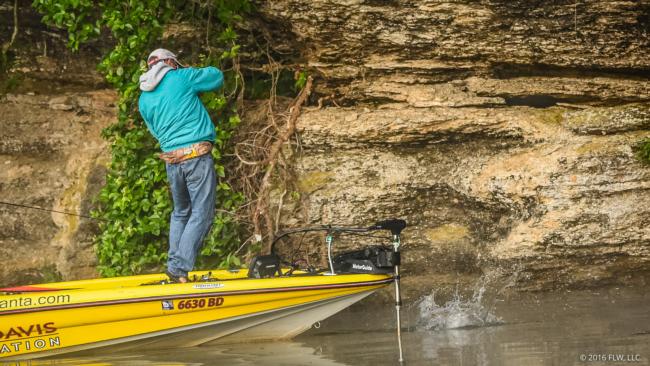 Kim Carver of Milledgeville, Ga., targeted the shad spawn on Wheeler for most of the tournament to finish second with a three-day total of 44 pounds, 14 ounces.

The primary components of Carver’s shad pattern were bluff banks in the back ends of creeks, especially if the bluffs had floating debris pinned up against them. Carver pitched a 1/2-ounce white jig with a white Zoom Super Chunk on 65-pound-test braid to punch through the flotsam.

In the afternoons, Carver would switch to pitching docks with a 1/2-ounce green pumpkin jig, targeting the shade of the docks. 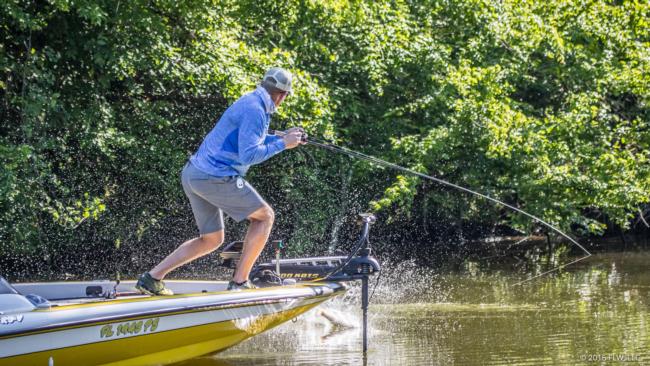 3. Smith fishes back in a creek for third

Similar to those fishing far up the Elk, Dustin Smith of Mount Dora, Fla., fished the remote sections of a creek farther up the lake to post a third-place finish with a total of 44 pounds, 5 ounces.

His go-to lure when “creek fishing” was a Missile Baits D Bomb in the super bug color with a 3/8-ounce weight pitched on 20-pound-test fluorocarbon.

“Earlier in the week I was fishing deeper wood in the middle of the creek,” Smith says. “Then I switched to fishing the bank of the creek, especially anywhere I could see little bluegill beds on little steps and shelves along the bank.” 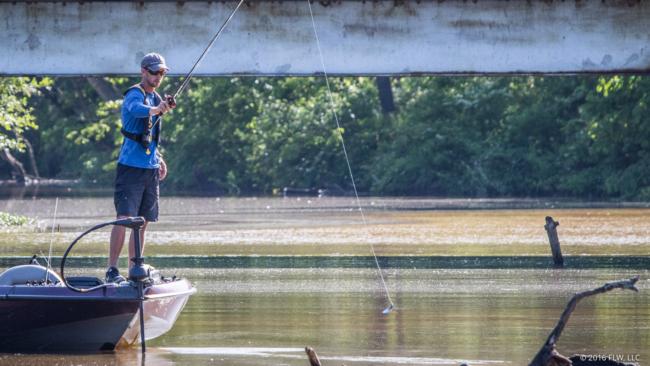 4. New junks it up for fourth

Bryan New of Belmont, N.C., finished fourth with 42 pounds, 2 ounces for the week.

New says he junk-fished in several pockets up the Elk River. At the beginning of the week he flipped the pockets with a Charlie’s Worms Flippin’ Bug and a Brush Buster with 1/4- and 5/16-ounce weights tied to 25-pound-test Sunline Shooter fluorocarbon.

On the second day New noticed a “shad fry hatch” and switched more to moving baits.

“I didn’t notice it earlier because I was pitching slow baits,” New details. “But once I went to a moving bait, I could see the tiny shad fry scatter.”

After that observation, New switched to a 1/2-ounce white Greenfish Tackle Swim Jig on Sunline FX2 braid and a Greenfish buzzbait. He also swam a 3.8 Keitech Swing Impact Fat on a 1/8-ounce head.

Going to moving baits made the fry scatter as the bait swam through, which helped trigger bites. 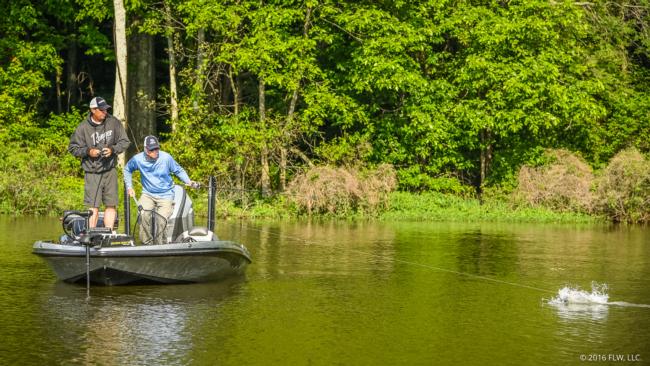 Glenn Browne of Ocala, Fla., finished the week in fifth place with a total of 40 pounds, 8 ounces. His finish at Wheeler marked his third top-five finish in a row in the Southeastern Division of the Costa FLW Series and earned him the division’s Strike King Angler of the Year award.

Browne stuck to his strengths at Wheeler, fishing shallow grass, laydowns, cypress trees and docks in water less than 3 feet deep. His lure arsenal included a Gambler flipping tube with a 5/16-ounce Reins tungsten weight, a SPRO frog and a 3/8-ounce jig with a Zoom Big Salty Chunk trailer. He tied the flipping baits to Lew’s APT Speed Line Fluorocarbon and the frog to 30-pound-test APT Braid. 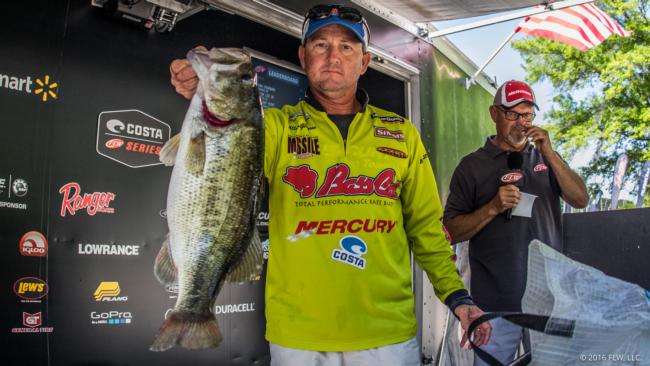 Allan Glasgow of Ashville, Ala., finished sixth with a three-day total of 40 pounds, 2 ounces.

Interestingly, Glasgow fished what he called “crab grass” in Spring Creek for his catches during the week.

“I had no idea what it was,” Glasgow says of the grass. “Some of the other anglers in the tournament told me it was crab grass. It grew on the bottom out to about 3 or 4 feet. I could see dark clumps of it on the bottom, so I started fishing it with a ChatterBait, sort of slow-rolling it through the grass.”

In addition to fishing the grass, Glasgow also pitched to any bushes he came across.

For the grass, his setup was a 1/2-ounce ChatterBait with a sexy shad-colored Keitech Swing Impact Fat trailer tied to 17-pound-test Bass Pro Shops fluorocarbon. When pitching the bushes he used a Missile Baits D Bomb with a 1/4-ounce tungsten weight, also on 17-pound-test line. 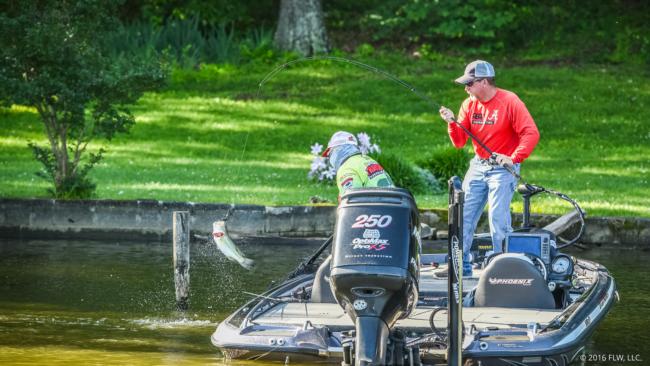 Terry Tucker of Gadsden, Ala., sacked up a total of 39 pounds, 11 ounces for the week to finish seventh.

Tucker spent the majority of his time in the Elk River fishing seawalls and docks on shallow flats. Each day the water seemed to rise and fall just a bit, and Tucker says the bass would move with the water-level change.

“In those flats, just 3 or 4 inches of water is a big deal,” Tucker says. “So when the water was higher I would fish up against seawalls, and when it fell out I would follow the fish out to the ends of docks where it was a little deeper and more shaded.”

He fished the crankbait up around the seawalls and pitched the jig at the ends of the docks. 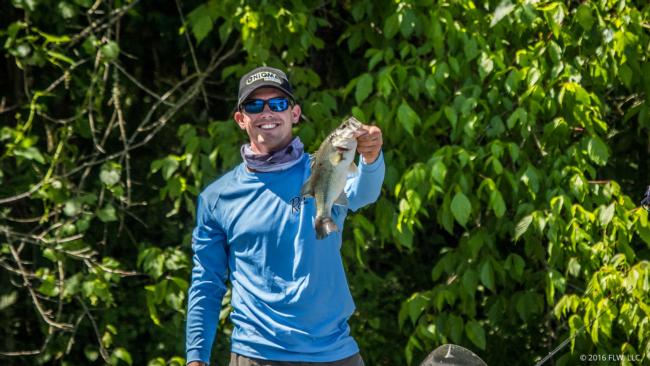 Interestingly, Dial says each day his fish moved toward the river, and Bradley Dortch, the tournament winner, was positioned at the mouth of one pond, catching them when they came out.

“The first day, I caught them way in the back end of the bay,” Dial says. “The next day, I couldn’t get bit in the back, and I caught them in the midsection of the bay. On the final day, the water had dropped so much that I could hardly get around in there, and my bite got really tough. But he [Dortch] had been fishing out there on the main river at the mouth of the bay all week. I really think those fish he caught were funneling out of the bay out into the river because they were done spawning and the water was dropping.”

In the shallow grass and wood in the pockets and ponds, Dial fished a 1/2-ounce spinnerbait with a Zoom Split Tail Trailer. He also flipped a NetBait B Bug with a 3/16-ounce weight. He fished both lures on 20- and 25-pound-test HI-SEAS Fluorocarbon. 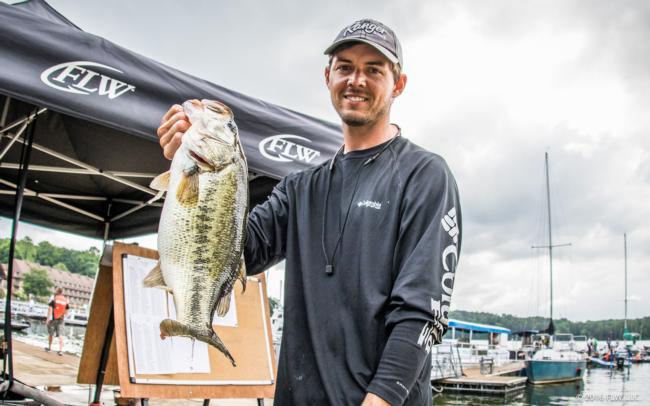 “I caught 90 percent of my fish in water that was 2 feet deep or less,” Beavers says. “I was fishing shallow points with rock and wood on them. If there was rock, wood and a dock on a point, it was even better. The shade under the docks got better later in the day.”

Beavers says he used the Super Fluke on his bladed jig to help it skip better under docks. 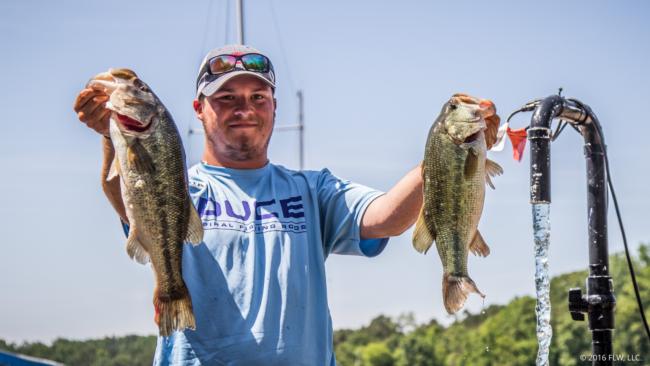 Bryant Adam of Madison, Miss., rounded out the top 10 at Wheeler Lake with a total of 30 pounds, 5 ounces.

“If my trolling motor was grinding the bottom I knew I was in the right depth of water,” Adam says of where his fish were located. “I keyed on the shallowest water I could find that had gator grass and primrose growing in it.”

When the breeze blew into the shallow pockets, Adam opted for a 1/4-ounce ChatterBait in black and blue teamed with a Strike King Rage Tail Menace Grub on 20-pound-test Bass Pro Shops XPS fluorocarbon, fished on a Duce 7-foot, heavy-action rod. If it got calm and the pockets slicked off, he went to a Hoax Fish Scam Shad (black and blue) rigged with a 3/16-ounce pegged weight and pitched in the shallows on a Duce 7-foot, 6-inch rod.