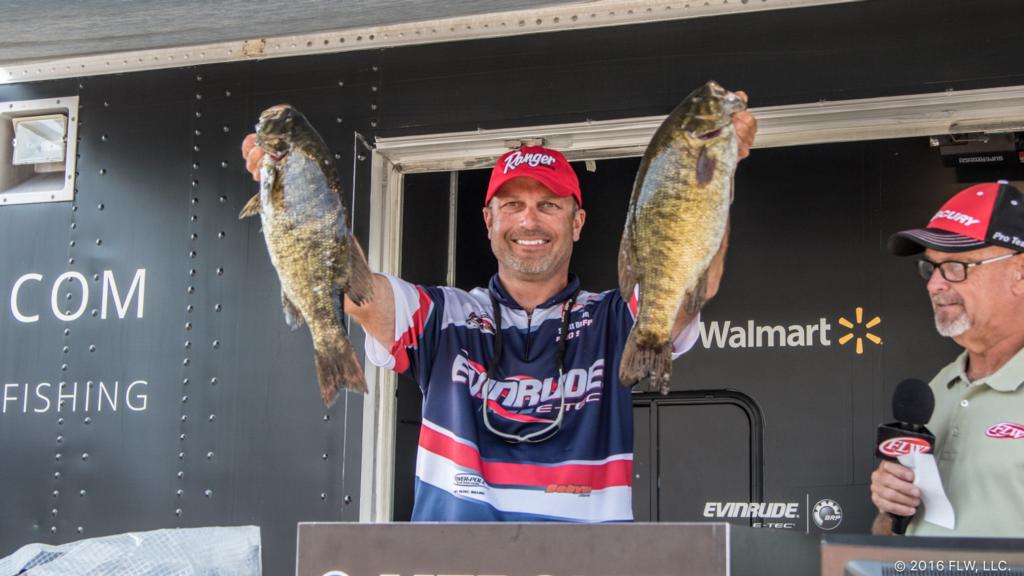 Despite the impressive weights that were hauled to the scale for the opening round of the Costa FLW Series Northern Division event presented by Mercury at 1000 Islands, it was actually a tough day of fishing. Strong winds challenged the anglers regardless of if they were fishing Lake Ontario or the St. Lawrence River.

At the head of the pack is smallmouth guru Scott Dobson of Clarkston, Mich., who sacked up 24 pounds, 9 ounces on day one to take a 1 1/2-pound lead over Canadian stick Cal Climpson.

Dobson says he hasn’t fished this area for years, and actually almost didn’t fish this event because of other tournaments in Michigan. He ended up getting in last minute and is obviously thankful that he did.

“I fished a BFL back home on Saturday [he placed eighth] and a TBF tournament on Sunday,” says Dobson. “When I found out I got in the [Costa] tournament I headed right over here so that I could practice Monday. So I only got about two and half days in of practice.”

It didn’t take long for the Michigan pro to dial in on what these finicky smallmouths were doing.

“I figured out a little pattern pretty early on in practice,” Dobson says. “It is pretty similar to stuff we do back home on Lake St. Clair, so it was easy to run with once I got on it. The nice thing is not a lot of other guys are doing it.”

While many of the top pros are relying on graphing small schools of fish out deep, Dobson is on a different game plan.

“It’s really junk-fishing of sorts because I’m throwing a few baits and covering water,” he adds. “It isn’t something you can do everywhere, but I caught them from 2 feet down to 20 feet today.”

One of the biggest keys for Dobson was being able to find fish in both the river and lake – something not a lot of other pros were able to do. The other big factor was being able to borrow a boat that can handle the big waters of the St. Lawrence and Lake Ontario.

“I can’t thank my friend Bryan Doyle [who is fishing as a co-angler] enough for bringing his Ranger 620 Fisherman out here for me to borrow this week,” Dobson says. “I ran around all day and never got wet.”

Though he caught an impressive bag, Dobson only landed nine fish today. In fact, his weight could have been much higher had he not lost a few big ones. The plus side to that is they are still swimming out there for him to maybe get another chance at tomorrow.

Friday is setting up to be an interesting day. The weather predictions have called for winds upward of 30 mph. Depending on how bad it gets, the field might be limited to fishing the river only. Dobson isn’t worried.

“I really wouldn’t have a problem fishing in the river tomorrow,” he says. “I think I have enough areas to catch maybe six fish on the pattern I’m on.”

Leading the co-angler side of things is Zachary Francis of Abingdon, Va., who hauled in 18 pounds, 5 ounces worth of 1000 Islands bass on day one. The third-year co-angler in the Northern Division is looking for Costa FLW Series win No. 2 but has just a 1-pound lead over Pennsylvania’s Rob Johnson heading into day two.