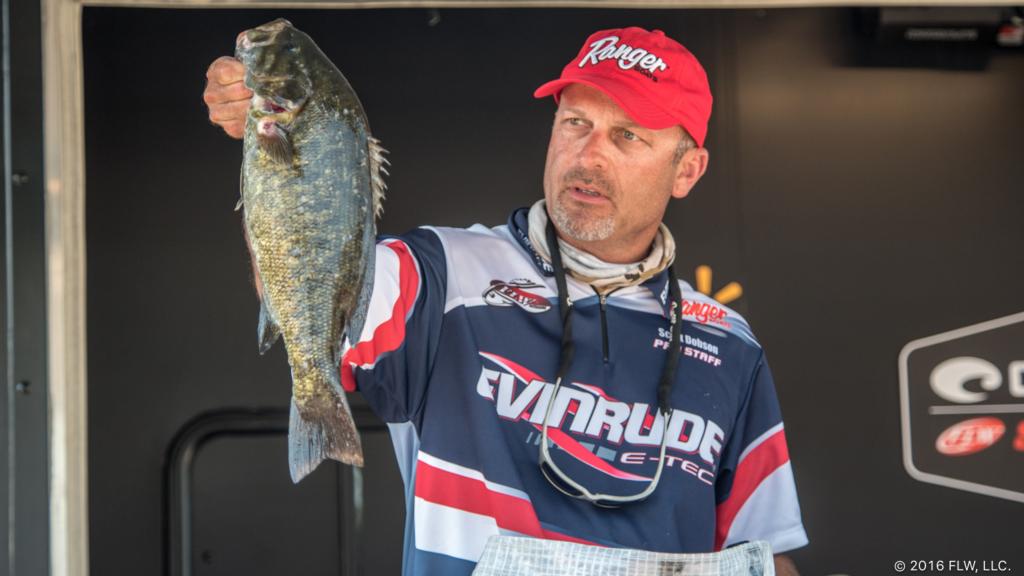 The wind blew hard enough on day two of the Costa FLW Series Northern Division event presented by Mercury at 1000 Islands to force tournament staff to make Lake Ontario off limits to competitors, but that didn’t stop day-one leader Scott Dobson of Clarkston, Mich., from sacking up an impressive 22-pound, 3-ounce limit, bringing his two-day total to 46-12 and extending his lead to 5 pounds over Cal Climpson – a noted Lake Ontario maestro.

Dobson was one of the few pros atop the leaderboard that felt OK with being confined to just the St. Lawrence River for day two. He caught some key fish late on the first day in the river on his way back to weigh-in.

“I started out on a little current deal right away, and then I moved to the flat I caught some on yesterday,” says Dobson. “The flat has a break right next to it, and I could see them swimming around in 7 to 14 feet of water.

“I’ve been throwing a drop-shot with a 1/4-ounce weight, but with the wind and current I had to go up to a 3/8- and eventually 1/2-ounce weight to get the bait down to them quick enough.”

Dobson has a secret little bait he is using. He says he’ll reveal it tomorrow, but for now he calls it “Mr. Flanders.” He is also keeping tight-lipped about the specific pattern he is running but says he is targeting “blue diamonds” to catch his fish. Apparently, if you throw Mr. Flanders on blue diamonds you catch big smallmouths.

Like yesterday, Dobson had some trouble keeping fish buttoned today, but luckily that hasn’t hurt him.

“I had 20 pounds by 9 o’clock this morning,” Dobson says. “I made one more clutch cull around noon, and that was it. I lost three good fish today that could have given me more weight, but I think most of it was due to the size of my sinker I had to use. That big weight is like a pendulum to help them throw the hook.”

Dobson is no stranger to catching big bags of smallmouths as he is a force back in his home state of Michigan in the BFL events on Lake St. Clair, Erie and the Detroit River. He has won six BFL events since 2010, including one just a few weeks ago. If he can seal the deal this would be his first Costa FLW Series win and his first outside of Michigan with FLW.

“This body of water has to be the best untapped big-fish factory out there,” Dobson says. “There is so much bait in this system it is hard for it not to have big fish. I love it up here.”

It looks as though the wind will subside tomorrow, putting Lake Ontario back in play, and that will make a lot of the top 10 pros very happy.

“If it is as windy as the first day I won’t make the run out to the lake,” says Dobson. “If the weather holds and I can keep everything buttoned it should be a good day.” 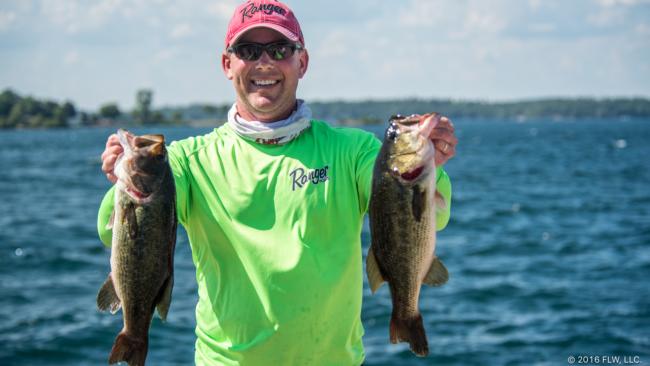 Tom Streek of Belleville, Ontario, took over the co-angler lead with a slow-and-steady approach after weighing 12-11 on day one and 14-3 today. His two-day total weight sits at 26-14, for just a 10-ounce lead over second.

“Fishing as a co-angler is different than the team tournaments I’m used to fishing at home,” says Streek. “You always have to be thinking about what to do different from the pro to catch fish. The decision process is so different.

“I targeted deep smallmouths yesterday and largemouths today. It is such a mental shift. But I prefer targeting smallmouths, so tomorrow [fishing with Dobson] should be fun.”