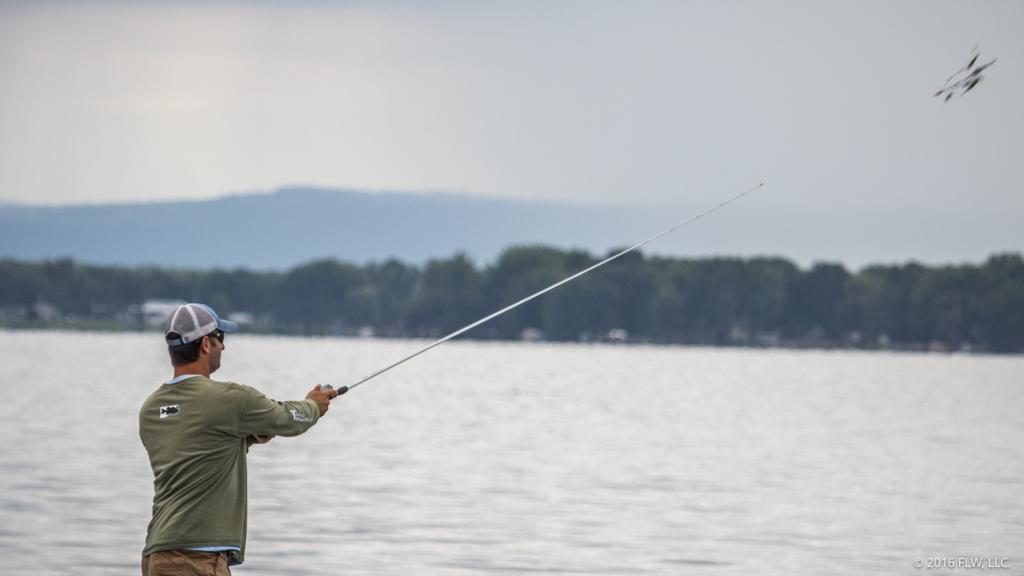 Plenty of pros caught largemouths in the Costa FLW Series Northern Division event on Oneida, winner Cory Johnston even weighed a few in on the first two days, but it was brown fish that dominated the top 10. From second to tenth, what follows is how the best figured them out. 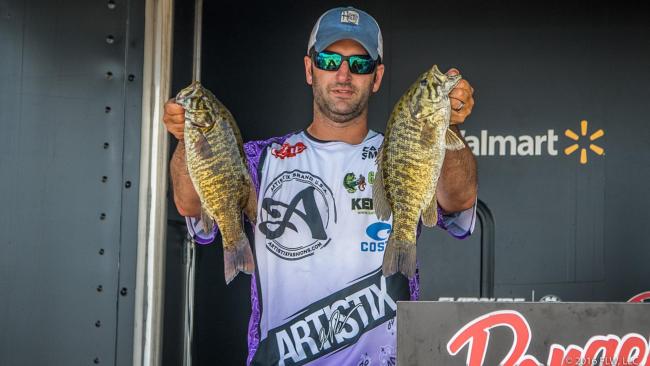 2. Smith relies on the rig

After winning the Northern Division opener on the Potomac, the only thing that kept Casey Smith from the Angler of the Year title was a hiccup at the 1000 Islands and lights-out performances by the Johnston brothers. Bringing in a limit all three days at Oneida, Smith tallied 46 pounds, 1 ounce for a total, handily distancing himself from third place.

“The weekend after we got done with the 1000 Islands I started going to Oneida,” says smith. “Checking temps, checking grass, and getting in tune with the lake. I broke it down to about 5 to 8 miles of lake and it lead me to several areas that I really dialed down.”

Smith says he had two primary patterns, fishing three areas with bigger, spread out schools of smallmouth until about 9 a.m. and later concentrating and hammering on smaller, more isolated spots. Regardless of the type of place, Smith was usually fishing in between 8 and 15 feet of water. His big areas were the same shoals that almost everyone touched on, but he says the more isolated fish were concentrated on slight rises with patches of rock mixed with grass that were about the size of a couple boats stuck together.

“Some of those fish had been there for weeks,” says Smith of his schooling areas. “In practice sometimes, I would catch one and the school would come up and the whole area would ignite around the boat.”

“I started with the umbrella rig,” says Smith. “But, I used the football jig in the right situation, mostly to try and clean up misses or get more from the spot if I felt there were one or two more there.

“It was unbelievable,” says Smith. “I go into every year and set goals that I feel are achievable. I don’t go out and say I want to win Angler of the Year and a tournament. I feel like I understand where I am in fishing in general. To go out and exceed the goals is a great feeling. It’s a great validation of all the hard work that goes in behind the scenes. I thought it could be a possibility with the home schedule, but I didn’t expect it or plan on it.” 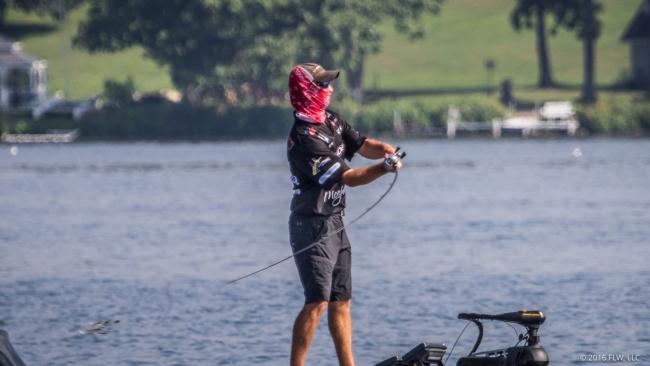 3. Renfrew mixes it up

One of the few pros to really throw largemouths into the mix, Ian Renfrew booked a 44-14 total and actually started on largemouth bass each day of the tournament.

Throughout the event, Renfrew started chasing largemouths with a 6-inch Roboworm Fat Straight Tail Worm (Aaron’s morning dawn) on a drop-shot. His spot was simply a rocky patch in a grass bed – one he says has been producing for more than a month now. Unfortunately for him, the wind on the final day had it totally blown to pieces.

From there, Renfrew moved to smallmouth, targeting the outside grass line of a big flat in about 12 to 14 feet of water. For the smallmouths, he quickly retrieved a homemade umbrella rig with Optimum Opti Shad swimbaits around the outside with a 3.8-inch Keitech Swing Impact FAT in the middle with 1/4-ounce heads on the two bottom wires and 1/8-ounce heads everywhere else.

“I don’t give them a chance to look at it,” says Renfrew. “The quicker you can get them to bite the better off you are. I don’t think I had a follow up all tournament. In practice, Larry (Lawrence Mazur) and I figured that if you could get 7 to 10 bites on it per day you could win.”

Though he didn’t win, Renfrew proved yet again that he’s always a force to be reckoned with on Oneida. 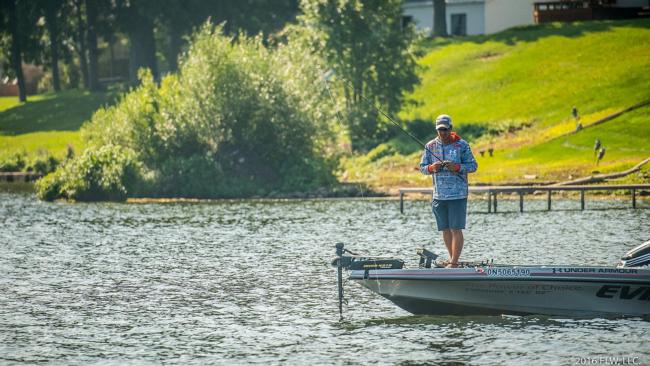 4. Topwater and shallow finesse do it for Chris Johnston

Were it not for some big losses the first day of the event, Chris Johnston may have had an argument to win, or at least finish back-to-back with his brother. As it was, he still managed 44-12 for fourth place on a lake he’d never seen before.

Johnston plied two primary patterns this week – the first was a shallow, isolated cover deal like what Cory Johnston did for the win and the second was a topwater game plan.

“I had one deeper spot that was 8-10 feet, and then everything else came in shallow,” says Johnston. “It was a shallow deal, in 2 feet to 6 feet. There are so many fish that live there, and I don’t think they replenish.

“They’re tough to get to bite too, so there was a lot of blind casting and not as much sight-fishing as I’d like to. I knew the fish were on that piece of cover and I’d stand back and use my electronics and make a precision cast.”

On the second day, Johnston had great conditions to visually cast to his targets after lining up, but the final day’s wind impeded that and forced him into a sheltered backup spot.

“I got a lot of other fish on topwater too,” says Johnston. “You couldn’t sight-fish them, they were deeper in 8 to 10 feet, and I had three or four zones where I could run that, but today I couldn’t do that either.”

Up shallow, Johnston’s bait of choice was a wacky-rigged Yamamoto Senko and for the topwater fish, he threw an Evergreen OB Popper. 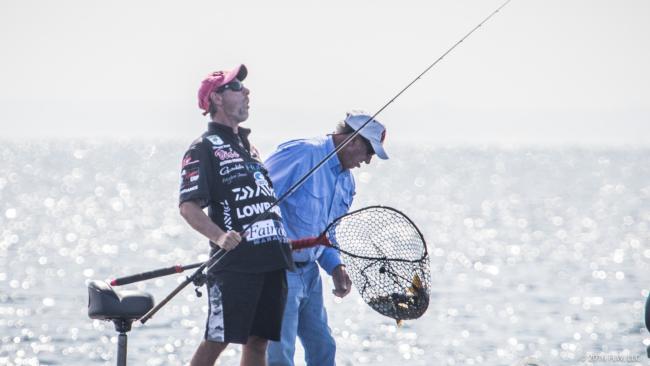 Ian Renfrew and Lawrence Mazur are team partners on Oneida usually, and they both acquitted themselves well on their home lake. While Renfrew mixed in largemouths, Mazur stuck to his guns with the umbrella rig and weighed 44-3.

“I found the fish in practice, and I just caught them all on the A-rig,” says Mazur, who won a Costa FLW Series event on Lake Erie in 2011. “I was just throwing it out there and burning it back.

“Today they were hitting it weird, I only had four fish today and I lost four,” says Mazur. “But, that’s fishing.”

Though he says he ranged as far as Shackelton Shoals and Lakeport Bay, his primary area was the edge of a flat with mixed rock and grass on the north shore that he shared some of the time with Renfrew (particularly on the second day).

There, he threw the same umbrella rig as Renfrew, a homemade job with Optimum Opti Shad swimbaits around the outside, a 3.8-inch Keitech Swing Impact FAT in the middle and 1/4-ounce heads on the two bottom wires and 1/8-ounce heads everywhere else. Mazur says the he had couple isolated spots he plied with a 1/2-ounce Missile Jigs Mini Flip Jig paired with a 2.8-inch Keitech Swing Impact FAT (black), but that the umbrella rig was far and away his weapon of choice. 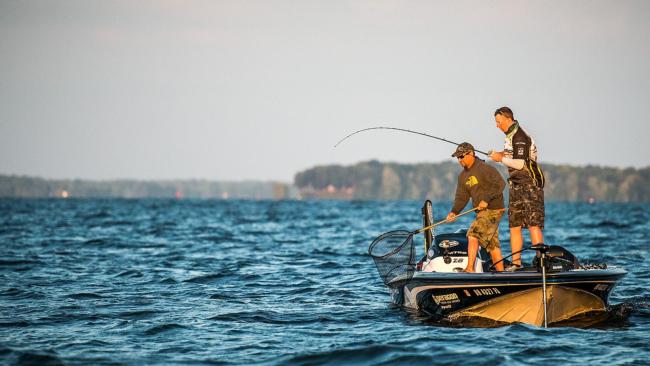 6. Weisenburger rigs on one shoal

Kyle Weisenburger tallied 41-7 for his total, but the vast bulk of that came on the first two days when he hammered one primary area for his catch.

“It was a pretty big shoal and on the edge of it was a little finger that came out with grass on top if it,” says Weisenburger. “I’d sit on the edge of that and fire the Alabama rig up to it. Basically, I just hammered it and today I don’t think there was much left.

“I had a few fish shallow on that same shoal, and I caught a few fish up there on a rocky spot with a wacky-rigged Senko and a ChatterBait.”

Unlike Renfrew and Mazur, Weisenburger switched up his umbrella rig retrieve a bit.

“Each day was a little different,” says Weisenburger. “The first day I threw it out and just let it slowly fall as I retrieved it. On day two I would fire it out and kind of twitch and jerk it back, and a couple of times after I jerked it out of grass they would eat it.” 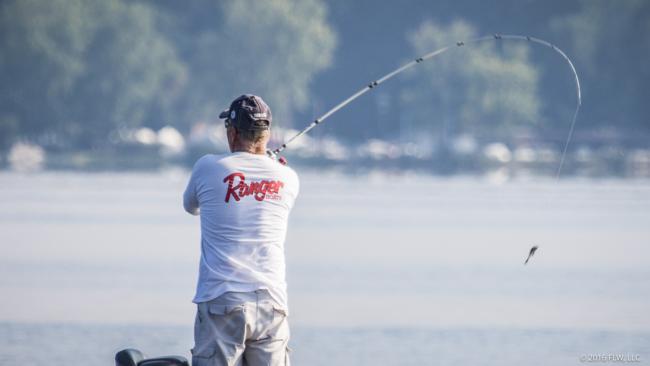 After winning the FLW Bass Fishing League event on Oneida the weekend before, Ed Casey was coming in with a full head of steam. As it was, Oneida was kind to the experienced pro again, and he chalked up 41-5 for seventh place.

Though Casey hit a few other small areas and scrambled a little on the final day, he primarily ground it out on the same shoal that won him the BFL. He didn’t have the spot nearly to himself, but he was definitely the highest finisher to come off it.

“I’ve won money in that spot the last four times I fished,” says Casey. “In practice I found a couple other shoals like that, and I had some good fish on the north shoreline, but you had to run and gun. That was the only place I knew I could pull up there and get five fish throughout the day.”

To pick the area apart, Casey used a River2Sea Whopper Plopper 90 some on the second day, but caught almost all his weight on either a Keitech Model II Tungsten Football Jig or a Strike King Baby Structure Jig, both of which he trailered with a black Keitech Swing Impact FAT. 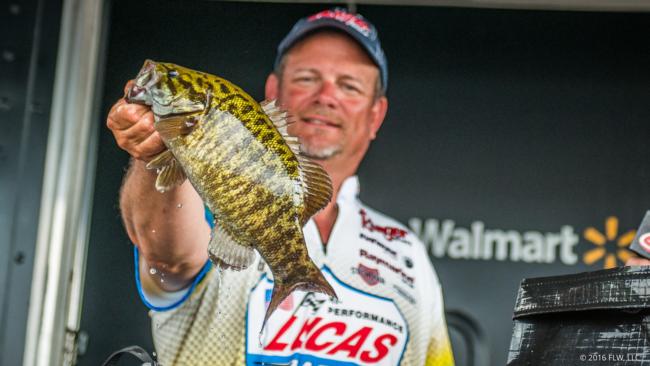 8. Mixing things up was the way to go for Vitaro

Catching a three-day total of 38-14 was enough to put Jim Vitaro in eighth when the dust settled.

Vitaro says that but for the afternoon of day two, he keyed on a few shallow shoals in 3- to 8-feet of water. He fished primarily with a Heddon Saltwater Super Spook Jr., but also with a Z-Man ChatterBait tipped with a Strike King Blade Minnow.

“The Spook was the key, that’s what I was getting my bigger fish on,” says Vitaro. “It was all about a certain cadence with a slow to medium retrieve.”

In the afternoon on the second day, Vitaro made a big move with a YUMbrella Flash Mob Jr. with Reaction Innovations Little Dippers on a point along the north shore.

“I was just chunking it and reeling it real slow,” says Vitaro. “It was a long, tapering point off an island and I’d pull it through the scattered grass with 65-pound-test braid and a flipping stick so I could rip it out. Sometimes they’d hit it right then.”

Unfortunately, Vitaro couldn’t sustain his upward trajectory, and only managed three bass on the final day. Still, it was enough to earn the Ohio pro his first top 10 in FLW Series compeition. 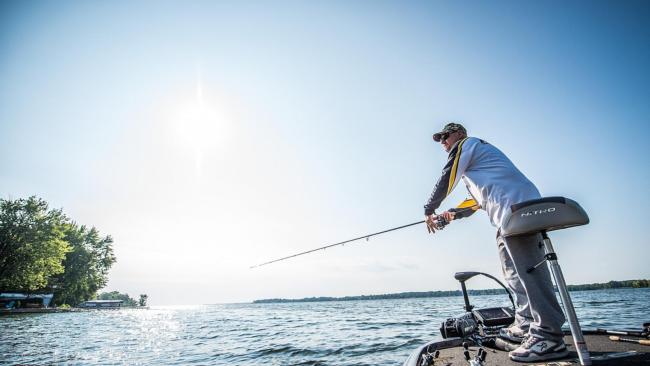 Jason Shipton weighed 35-12 total, and was hurt as much as anyone by the wind on the final day.

“I was targeting isolated grass with rock bottom in 9- to 12-feet of water,” says Shipton. “It was a big flat, with some bigger rock on it. On the final day, I couldn’t see into the water an inch. There was a shoal in front of it, and the mud from that had blown all over it.”

Mostly casting to specific waypoints, Shipton picked the area over with a Sneaky Hollow Tarantula (a spider grub) on a 3/8-ounce Texas rig. Occasionally he would break out a ChatterBait or spinnerbait to hit the thicker section of grass. 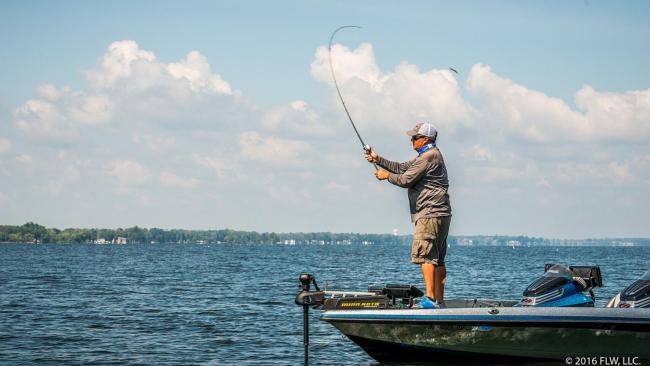 Totaling 34-3, Lucas McDaniel caught almost the entirety of his weight on top.

McDaniel says that the key to his shoal was a ditch running up onto it, and says that when the conditions were right, he caught smallmouths in anywhere from 1- to 20-feet of water.

His bait of choice was a Lobina Lures Rio Rico.