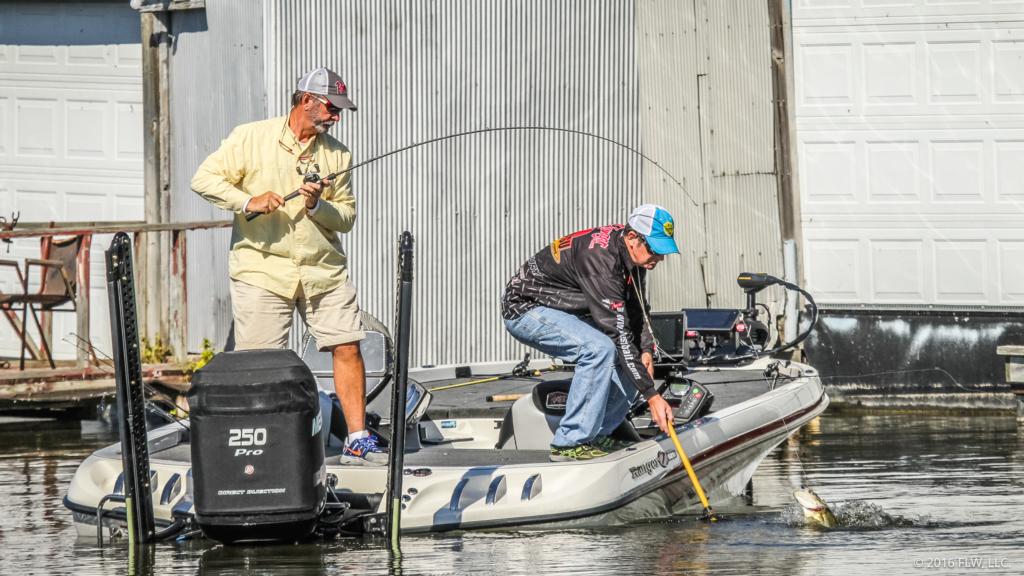 Day two of the Costa FLW Series Southwestern Division event presented by Lowrance on Fort Gibson Lake has unfolded with warmer conditions and less wind than day one, but catches still seem fairly few and far between.

Day-one leader Charlie Apperson struggled during the first half of the day, as the topwater bite that yielded two early keepers on day one never materialized. In fairness, his best topwater action had been around 7-7:30 in practice.  Heading out as boat 85 on day two may have caused him to miss the window.

Apperson fished a variety of bluff walls, wood and points, but managed only one keeper by the time we left him around 11 a.m.

Today’s bright sunlight has no-doubt positioned fish under and adjacent to shady cover. Timber, stumps and boat docks are getting a work out today and several anglers have fared well.

There’s a ton of shad in the mouths of pockets and creeks, so bass have plenty of natural meal options. Successful anglers are the ones that are making convincing presentations to the right areas.

Today’s the final day of fishing for most of the field, and there’s bound to be drama at weigh-in. For that, be sure to watch live at 3:30 p.m. CT to see who makes the top 10 cut and the final day.