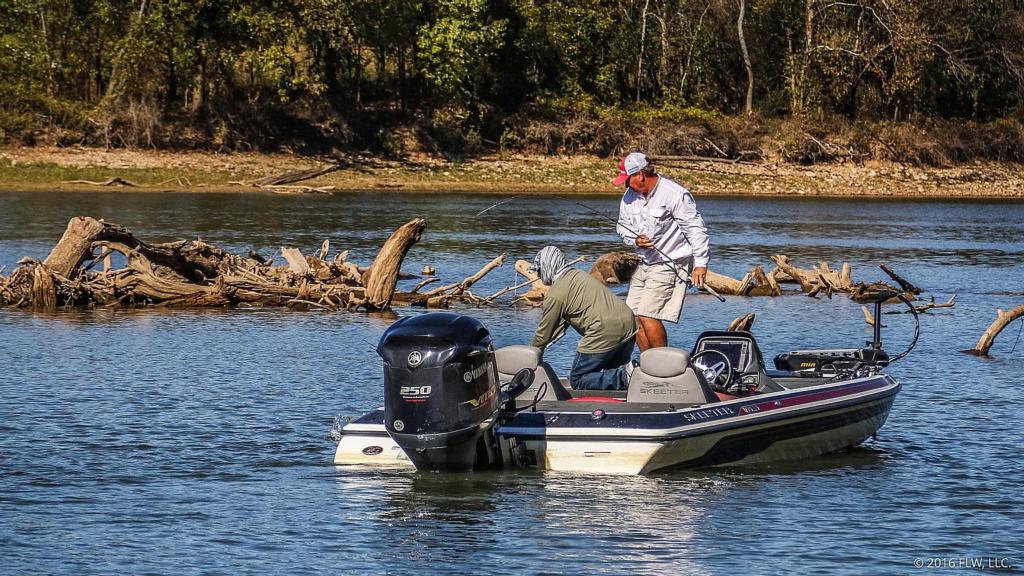 The story of day two of the 2016 Costa FLW Series Championship on Table Rock was undoubtedly the two-and-a-half-hour fog delay and the weather change, with the morning temperature about 10 degrees lower than on day one and sunny, slick conditions throughout the day. While significant, the outside factors didn’t impact the top five too much, and their consistency was key to keeping it tight at the top. 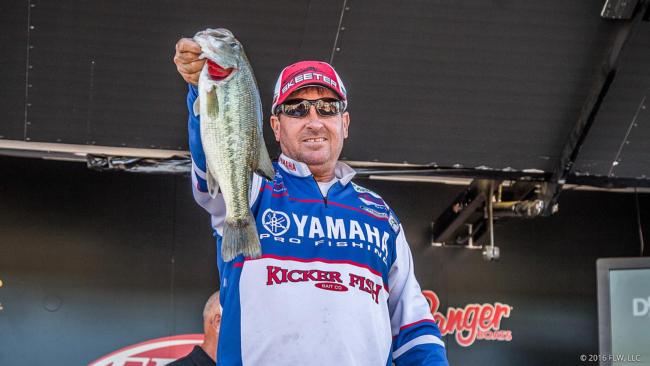 After a solid start on day one, Cody Bird moved up to second on day two with a limit worth 11 pounds, 10 ounces to get his total up to 25-15.

Uniquely, the veteran Texan is targeting smallmouths and largemouths, and the smallmouths bailed him out today. Bird’s biggest bass was a largemouth, but the rest of his limit was entirely brown.

“I’ve been doing a couple of things,” says Bird, who is fishing far up one of the rivers. “I changed up a little bit today to catch those smallmouths. I actually got on one good spot that had several of them, and I culled a couple of fish today too. There’s a possibility of catching a big stringer where I’m at, but everything has got to go right.

“Those little smallmouths are really good whenever you get a tough tournament, because they’re really aggressive,” says Bird. “I had that one good largemouth today, but I didn’t really get to concentrate on those.”

Perhaps, if there’s no fog on Saturday, Bird will get to swing a little at the largemouths on the final day. 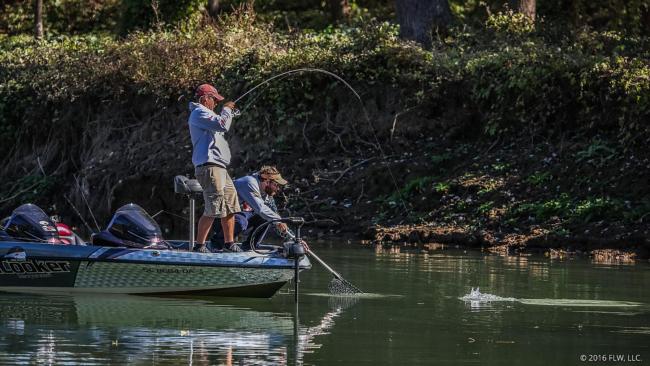 After taking the lead on day one, Pat Fisher chalked up a quick limit for 10-1 on day two to hang in the top 10 going into the final day.

Like Birge and Bird, Fisher is also fishing far up one of the rivers that feeds into Table Rock. On day one, Fisher took advantage of a strong topwater bite in the overcast conditions for his leading limit. With bright sun and a late start on day two, he turned to a shaky head and caught just five keepers on the day.

“I kind of tuned it in. I know which area has the fish in it now,” says Fisher of his key stretch. “I really hope we don’t have a fog delay [on Saturday] so I can see if they’ll eat that buzzbait.”

Fisher is so far up the river that there’s noticeable current on almost everything he’s fishing, and the main fish-holding targets include various cuts, rocks and laydowns.

“I’ve got pockets down that I can go run in, but this seems to be the best concentration of fish,” says Fisher. “I’m dialing it in. I shrunk my area today. I know which area I need to be in.”

Though Fisher only landed small keepers on day two, he saw both a 5-pounder and a 3-pounder follow hooked fish out from other pieces of cover. With a little luck, the fish are there for a final-day charge. 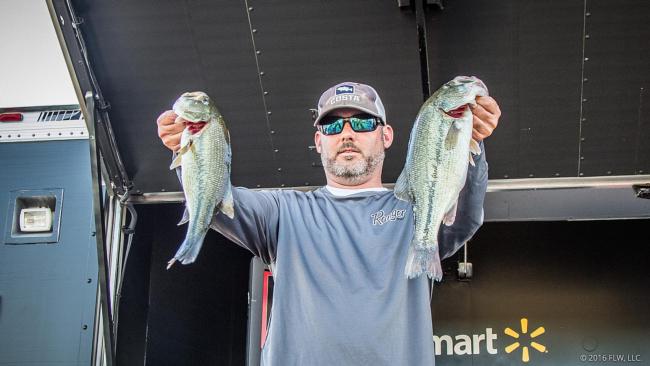 Brad Cook is doing something unique that will be fully revealed in good time. Today, Cook only boated four keepers, but they went for an impressive 10 pounds, 7 ounces.

“I’m confident, but I caught my fourth keeper with about 15 minutes left to fish,” says Cook, who lost a 4-pounder early in the day. “But I also caught about four shorts. If I’d executed I probably should have had 13 or 14 pounds.”

Cook says he’s running a bunch of waypoints with fish (or groups of fish) that he can actually see at least some of the time.

“It’s all waypoints,” says Cook. “I have a 5-pounder that I’ve messed up on twice. It didn’t bite today, but I saw it again. Maybe with a morning deal I can get her to come up to eat. I’ve been after her for two days.”

Cook says his best window is from about 10 in the morning until 1 in the afternoon. After that, he’s generally been less successful at getting his fish to commit.

“I was pretty slow and methodical today,” says Cook. “Tomorrow, in every area I know some fish live in I’ll be fast. I’ve seen enough to weigh 16 pounds that are still there after today. But they’ve gotta bite.” 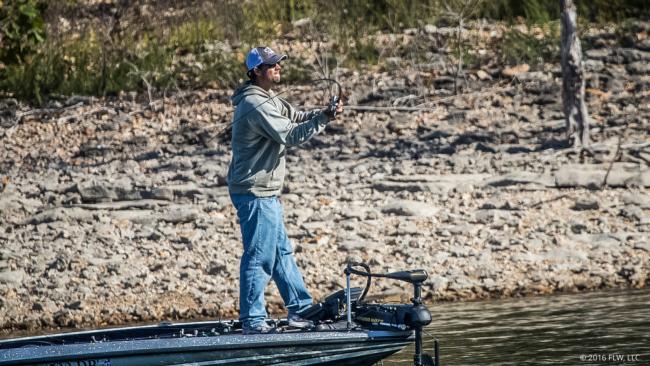 Dropping from second to fifth, Bradford Beavers only managed three keepers on the second day.

“I only had three bites that I feel like were keeper bites,” says Beavers. “I did the exact same thing I did yesterday. The only difference was, by the time we had blasted off today, I had every fish I weighed in yesterday. Today I caught my last one around 12 o’clock, and that was all she wrote.”

Beavers is fishing a moving bait mid-lake, and he’s got a handful of specific targets that he’s run throughout the first two days.

“I was hopping around from spot to spot,” says Beavers. “I’m just fishing rock in between 20 and 10 feet of water.  The areas I chose to fish are where the rock is rougher or higher. You’ll have gravel, and then there’ll be a rough patch or a rock pile. Anything out of the ordinary, that’s what I’m fishing. I found six or seven places like that in the area I want to fish, and I just rotated them all day.”

Going into the final day, Beavers plans to run his spots at least once, but he’s prepared to go looking for a new bite if that doesn’t pan out.