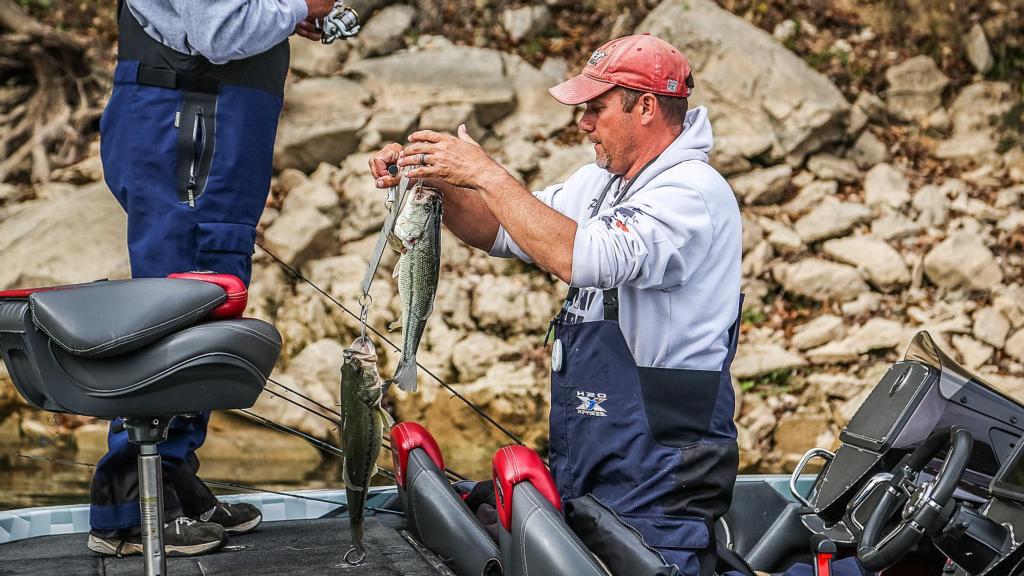 That's it for the day three coverage blog and all of our on-the-water coverage of the 2016 Costa FLW Series Championship. There's drama in store for this afternoon's final weigh-in, as this one is too close to call. Tune in live at 4 p.m. CT to watch the weigh-in and find out who's going to the Forrest Wood Cup.

Pat Fisher is working his way back to the ramp to check in. He has a long run, so his day is pretty well finished. Zack Birge is still sorting through fish closer to the ramp. He's got some time left to make something happen, but he better hustle. Cody Bird should be wrapping up his day too.

Their fate is nearly in the hands of the scale now, but a lot can happen in the final few minutes of competition.

We've learned a few lessons already this week from watching Birge and Fisher duke it out up the James.

For starters, getting away from the field and navigating into hard-to-reach waters can put you on active fish during tough late-summer/early fall days. We've seen this work for several anglers in the top 10.

Also, big gizzard shad attract a lot of shallow bass this time of year. They're swimming around in Birge and Fisher's area.

Current helps too. There's water flowing into their creek, and it's positioning fish in predictable areas, and it helps keep them active. Birge and Fisher are basically creek fishing – as in, they could be wade fishing.

Finally, when the fishing gets tough, look for current-driven areas where smallmouths live, because smallmouths are aggressive enough to bite no matter how tough the conditions … if there's current in shallow water. 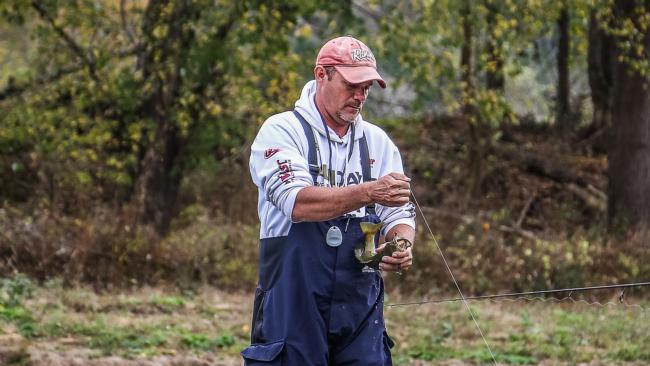 It can't get much closer than that. 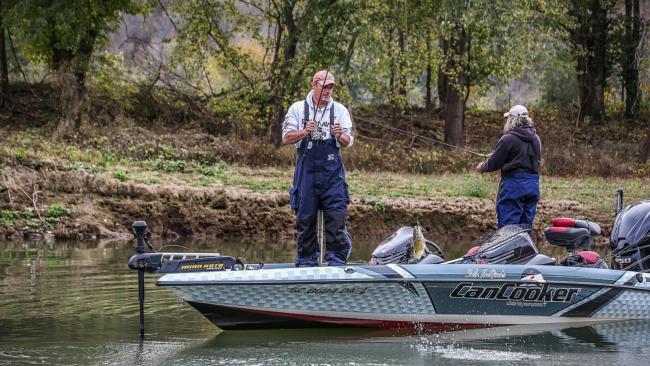 We just got a new update from Pat Fisher. He estimates that his weight is 14 pounds after a recent cull. That puts him ahead of Cody Bird and back in the driver's seat. This weigh-in could be too close to call.

Zack Birge is on the run now. He gave up on his spot far up the James and is bouncing around now to try and get back in gear.

We caught up with Chris Jones, who has been push poling his way into some extreme backwaters this week. He has four keepers for about 9 pounds right now.

After a brief break from throwing his crankbait to pitch a jig, Cody Bird back at his aggressive cranking approach. He's targeting wood and is committed to a quarter-mile stretch of the Kings River. The wood reloads with fish pretty quickly, and he's caught largemouths and smallmouths there. 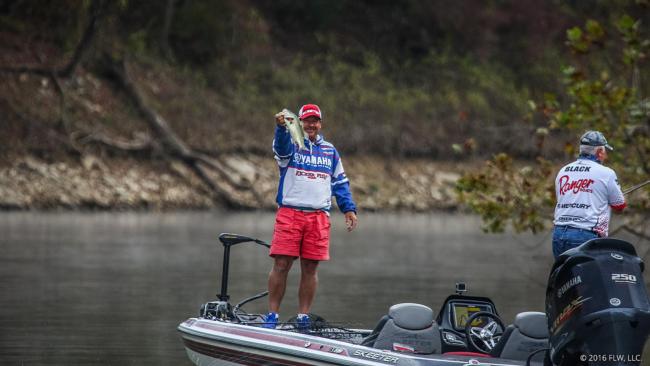 With a nice cull, Pat Fisher just improved his weight to about 12 pounds. He was 11 ounces behind Cody Bird coming into today, and Bird has probably 12 1/2, so they're no more than a pound and a half apart by our estimate – probably less than that. 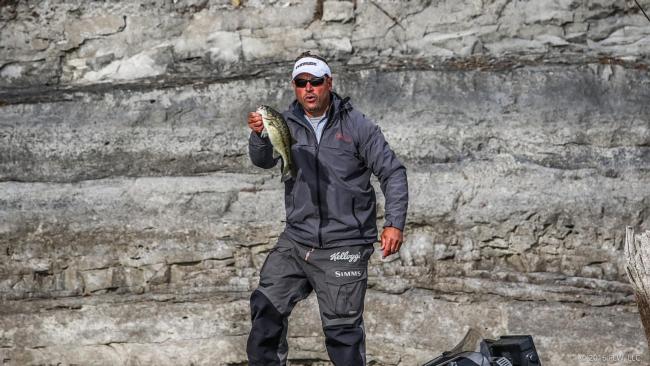 Though he started the day some 5 pounds off the lead, Greg Bohannan is doing all he can to catch up. He has a limit and has culled up to 9 pounds. He's had a number of blow-ups and near misses that could've upped his weight into double-digits, and he's caught several small fish. His action has been pretty stead all morning.

A couple of key fish from his "magic tree" gives Fisher a limit for about 9 1/2 pounds. He's battling to reclaim the lead that he lost on day two, when he weighed in only 10 pounds, 1 ounce. 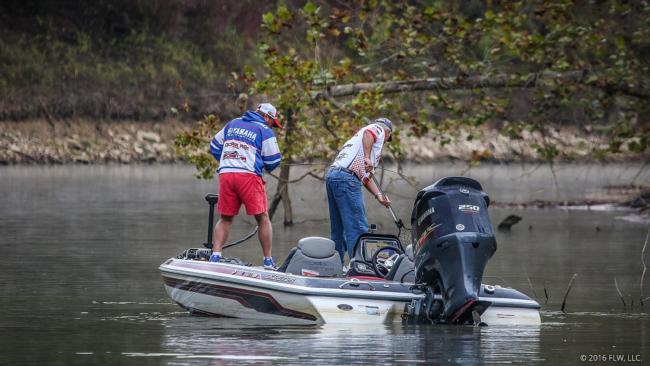 Another quality keeper raises Bird's total estimated weight to 12-plus pounds. He's picking up some steam now. Birge seems to have gone cold for the last hour or so. He's already contemplating a midday change, saying he might run to Long Creek at around noon if his fish don't turn on up the James.

Cody Bird just landed his fifth keeper. He has about 11 pounds, which makes him the unofficial leader. 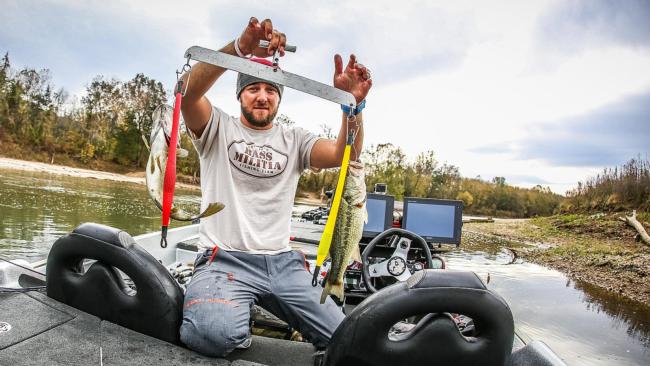 Birge's sixth fish allowed him to upgrade by a few ounces. He estimates that he has 8 1/2 or 9 pounds. Cody Bird came into the day 6 ounces back of Birge, and he has 8 or 9 pounds. It's too close to call right now. 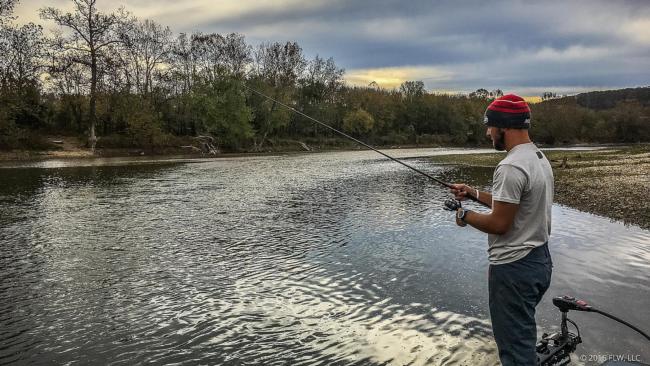 Birge's fifth was only 15 1/4 inches long, but he has a limit, and now he can go to work trying to improve his catch. Right now he's poled down in just inches of water, casting into a little run. He's basically creek fishing. Yesterday, he had all smallmouths. Today he has a mix.

After a quick bit of surgery on his boat, Zack Birge is back in action. His trolling motor is hard-wired now.

A couple of local anglers just rolled up on Bohannan and started fishing just 50 yards away. No worries. They showed up, and he added a 1 1/2-pounder to the livewell.

A puff of smoke and a whiff of ozone… Zack Birge's trolling motor plug fried itself, as in there was a little meltage going on, and now he's tackling the problem. Birge cut off the plug and is attempting to wire his trolling motor directly, sans plug. We'll see how it plays out. Currently, he's poled down in the channel and not fishing.

Cody Bird is burning a crankbait off wood cover in the main channel far up a creek, and it's working pretty well this morning. He's up to 8 or 9 pounds in the box with four keepers.

During a brief flurry of schooling activity, Zack Birge put his fourth keeper in the boat and landed a short fish.

Birge has spent most of the morning on one shallow bar. Meanwhile, Fisher has covered about four times as much water right by Birge. Perhaps the Oklahoma pro has dialed in on the juice in that area.

Fisher is way up the James slinging a small buzzbait. He recently put his second keeper in the boat. Topwater produced his 15-pound, 3-ounce day one limit, so he's hopeful that he can get the topwater bite going again today.

Day one leader Pat Fisher has his first in the boat. He's got some ground to make up to regain his lead. Currently, Fisher is in third place.

"We're not even to the best stuff yet," say Zack Birge, who now has three keepers in the boat. Birge started the same place as yesterday, but today he didn't have to wait on a fog delay. It appears that the morning bite is pretty darn good where he's fishing.

Using a walking bait and fishing far upriver, Zack Birge has put his first two keepers in the box. He's got a smallmouth and a largemouth. Neither is very big, but it's a good start. 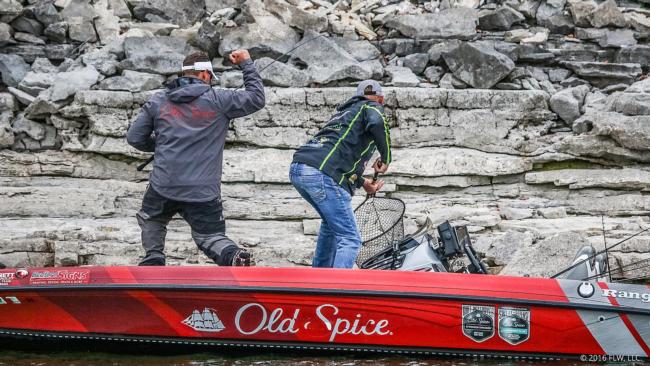 Greg Bohannan is the first member of the top 10 to box a keeper. He caught a 2 1/2-pounder while burning a crankbait down a bluff wall.

Birge and Fisher are sharing an area far up the James River. This morning, they had a brief chat about where they'd be fishing, and they set a few boundaries. It's a friendly agreement that should help alleviate any stress that comes with fishing so close to another competitor with a major tournament title on the line. 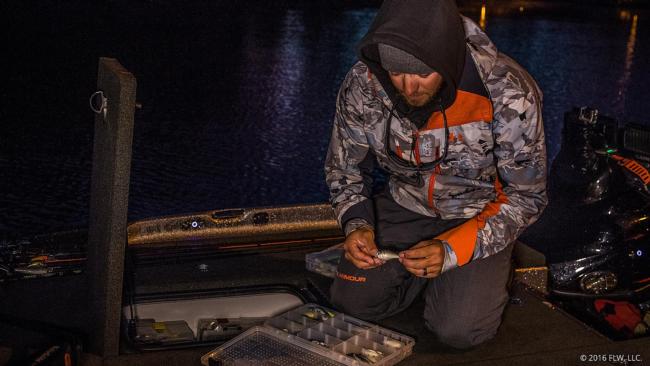 8 a.m. – Birge and Bird battling for the win, but a crew of other sticks is hoping to steal it away

The lead is slim, but it’s a lead nonetheless. Zack Birge of Blanchard, Okla., is in first place on the final day of the Costa FLW Series Championship by a margin of 6 ounces ahead of second-place pro Cody Bird. Birge is looking to win his second FLW Series title in just three seasons.

Yesterday, several of the top anglers were hampered by a fog delay that lasted nearly three hours. After making hour-long runs to their fishing areas, those anglers had little time to catch fish. High skies and post-frontal conditions made fishing even tougher. Birge’s fish weren’t affected, and he was able to sneak ahead. Today, everyone has a full day to fish, so the door is open for anglers such as day one leader Pat Fisher to get back in contention for the win.

This morning dawned cool and crisp, with an air temperature of about 43 degrees and partly cloudy skies. It’s the second day after a front, which is typically a tough day for fishing, but chances are the top 10 pros will overcome and produce some pretty good bags of fish to wrap up the 2016 season.

As always during major FLW tournaments, you can follow along live via the FLW On-the-Water Twitter feed by clicking here and scrolling to the bottom of the page.