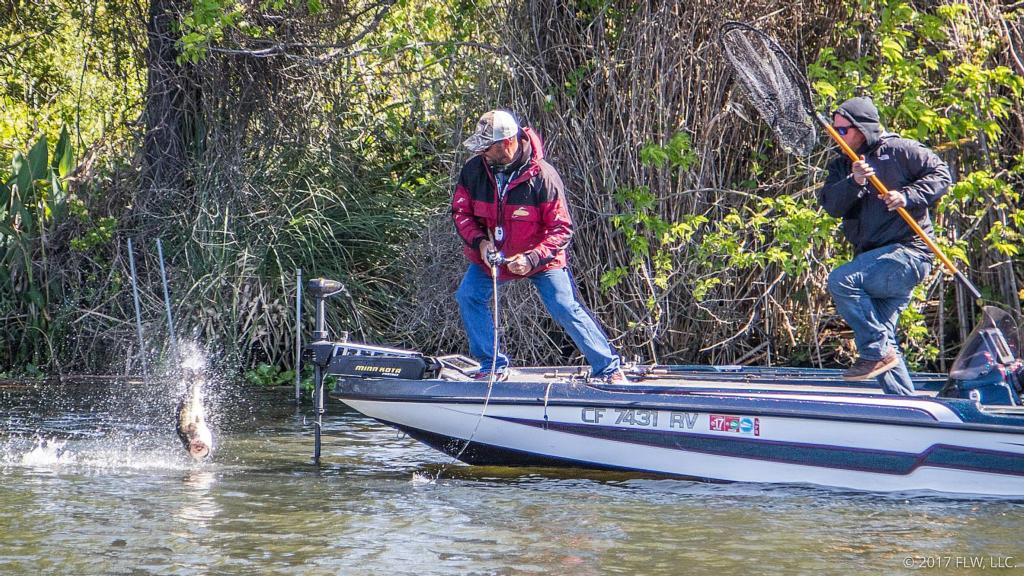 The Delta giveth and the Delta taketh away — that local postulate could strongly impact the standings at day two of the Costa FLW Series Western Division event presented by Power-Pole and hosted by Russo’s Marina and Sugar Barge RV Resort and Marina.

This tidal fishery, which drains California’s Central Valley via the confluence of the Sacramento and San Joaquin rivers, lacks not for inherent daily fluctuations — but serious anglers learn to manage these predictable changes. It’s the meteorological mayhem that tends to upset this fishery and temper its powerhouse potential.

That’s what’s tournament competitors are contending with, thanks to a cold front that arrived right before day one commenced. Yesterday saw daytime highs in the low-70’s; about a dozen degrees cooler than the first of the week. Today won’t push past the upper 60’s.

Compounding the cooling effects, the wind has kicked up considerably with 15-20 mph out of the west/northwest. This kind of blow stirs up the shallow, complicates any sight fishing efforts and challenges overall boat positioning and casting accuracy.

We caught up with some of the top pros from day one and it seems like the Delta’s dealing out its bounty in stingy doses. Beau Joudrey, who topped yesterday’s leaderboard, had a small limit by 9 a.m., but no kicker. Same story for third-place pro Ish Monroe.

A few quality fish in the 4- to 6-pound class were caught but it did not appear that anyone was on fire; at least in the first half of the day. Second-place pro Robert Lee was photographed catching an estimated 6-pounder, plus a couple more good ones, so he’s likely to remain at or near the top.

Today’s takeoff saw the end of the incoming tide, with high outgoing water lasting throughout most of the competition hours. Anglers will be moving around a lot and largely junk fishing, as dependable, replicable patterns are scarce.