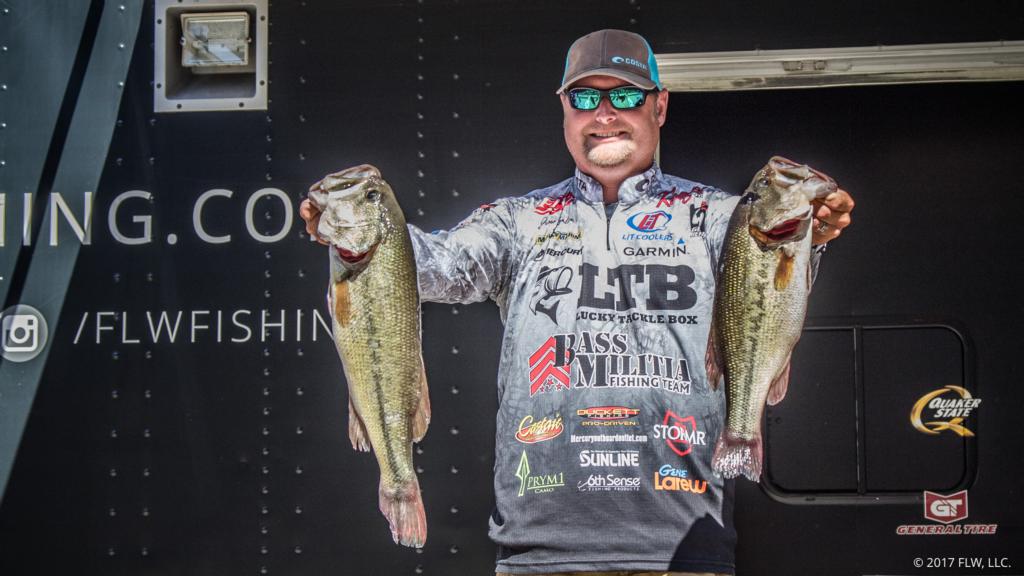 Perseverance and persistence are terms commonly bantered about in tournament circles, but Jason Lambert truly exemplified these traits by overcoming a potentially crushing limitation to maintain his lead on day two of the Costa FLW Series Central Division event presented by Lowrance on Kentucky and Barkley lakes. Sacking up a 24-pound limit, Lambert enters the final round with 49 pounds, 2 ounces total and a 2-ounce lead over second-place pro Cole Floyd.

With less current compounding the impacts of the previous round of intense fishing pressure, Lambert says that today was already shaping up to be a tougher go than day one, when he caught a limit of 25-2. Suffice it to say, he really did not need a major equipment malfunction.

“I had some electrical issues today. I don’t know if it’s my charger, but I haven’t had a trolling motor battery since 10:30,” he says. “We had a little breeze later in the morning and a little bit of current, so you could actually do some drifting. You could get on some straight ledges. I actually culled two times this afternoon by just lining up the boat in the current and letting it go.”

Though drifting is clearly not his preferred technique for fishing the main-lake ledges he was targeting, Lambert says his success hinged on recognizing what triggered bites and then repeating what worked.

“A lot of it is presentation. It’s not any particular presentation, but once you get bit, it’s important to duplicate that presentation,” he says. “It was hard because I couldn’t keep that boat where it needed to be. You just kind of have to take what’s dealt to you and realize that everybody has problems. To catch 24 pounds today with the problem — I’m happy.”

Lambert caught his fish on a crankbait, swimbait and hair jig and had his limit by about 8:15 a.m. He enjoyed a flurry around 10:30, which allowed him to cull three times. From there, he hit a dry spell that lasted until 2 p.m., when he finally caught another fish for an upgrade.

“It was in spurts again today, just like yesterday,” Lambert adds.

Of note is that Lambert opened his day on a school he had not previously seen. Intense graphing during practice prepared him with multiple school options, but this new school was a welcome surprise.

“I found these fish farther down from another place I had been catching them,” he says.

One of the spots he fished on day one yielded several keepers, including a 6-pound, 2-ounce kicker that anchored his effort and pushed him to the top of the pack. Balancing the elation, Lambert points to a couple of disappointments.

“The bad thing was, I had one that big come off this morning,” he says. “It’s a tough break, especially when you don’t do anything wrong.

“I’m not seeing some of the other schools that I was expecting show up. I had one that I was counting on disappear. I hope I get a clean day tomorrow and don’t lose any. If I get that, I think I have a legitimate shot.” 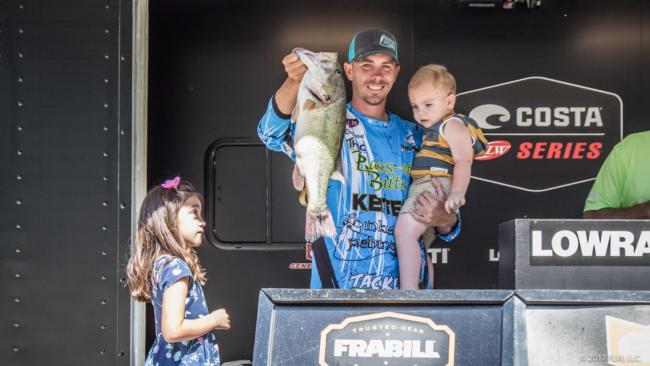