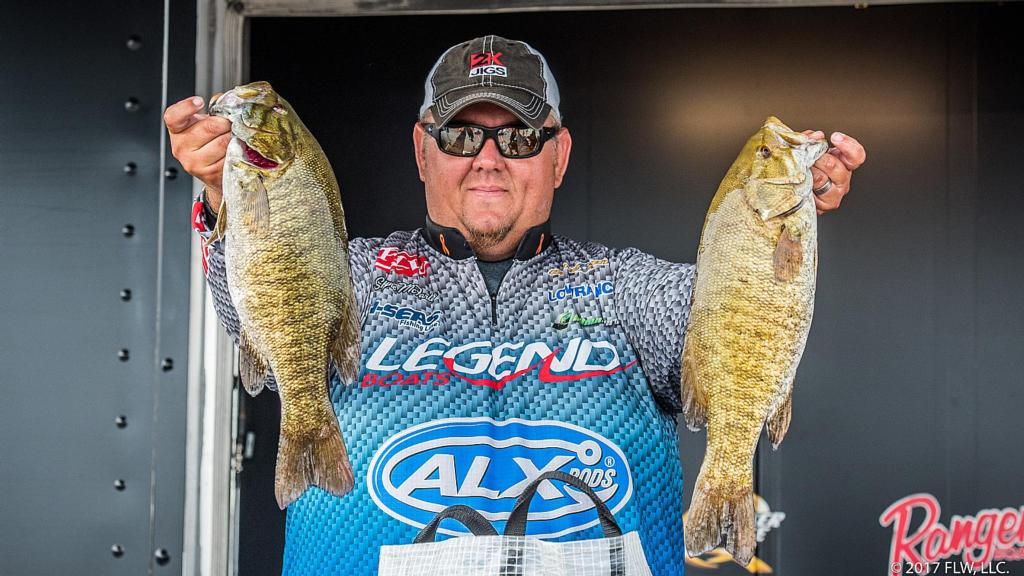 Leading day one of the Costa FLW Series event presented by Power-Pole on Lake Champlain, Shayne McFarlin of Martin, Ga., sacked up 19 pounds, 7 ounces of smallmouths to get the ball rolling. Behind him, he’s got a murderer’s row of out-of-town Champlain sticks and locals from Vermont and New York. Though the fishing was good on day one, weights fell slightly short of some pre-tournament expectations. Even so, eight of the top 10 weighed more than 18 pounds, and in true Champlain style, 10th place is only 1 1/2 pounds off the lead.

Like many others up high in the standings, McFarlin relied heavily on spawning smallmouths for his weight and fished the northern half of the lake.

“I pretty much stayed local,” says the Georgia pro. “I’ve got probably 20 fish marked, and I caught three of the biggest I had today. I left a few because I found a few bonus fish. I’m trying to save ’em. I don’t want to be greedy, but honestly I didn’t think I had 19 pounds.”

The forecast for Friday doesn’t look pretty. It’s supposed to blow pretty hard and storm, which could put a damper on some of the sight-fishing. Luckily for the leader he has other options.

“That’s not my only way of catching them,” says McFarlin. “I don’t know what the rain and the wind are going to do tomorrow, but it’s been making it tough all week in practice.”

McFarlin finished 10th as a co-angler in last year’s FLW Tour event on Champlain, and he enjoyed it so much he figured he needed to return.

“It was a lot of fun,” says McFarlin of last year’s fishing. “It’s a long ways from Georgia, but it’s worth it.” 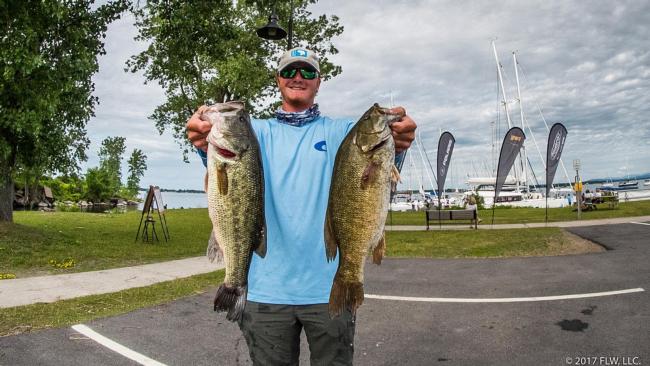 Weighing 18 pounds, 7 ounces, Daniel Weaver jumped out to a dominating lead on the co-angler side at Champlain. Hailing from Macon, Ga., Weaver is the brother of FLW Tour pro Josh Weaver and had never been to Champlain before this week.

“It started out real slow, and then they started biting real good,” says Weaver. “I wasn’t getting many bites, but the ones that bit were good.”

Weaver fished down south by Ticonderoga with Daryl Biron and was one of the few anglers in the field who had any success there. He even managed to weigh in a smallmouth from “Ti.”

“I had a 4 1/2-pound smallmouth,” adds Weaver. “We caught it down there. I just flipped up next to a dark spot, and it started swimming off and ended up being a big ol’ smallmouth.”

Weaver says he flipped mostly, but changed to a topwater late in the day for some of his bigger bites. On the day, he says he landed 10 bass and culled three times.