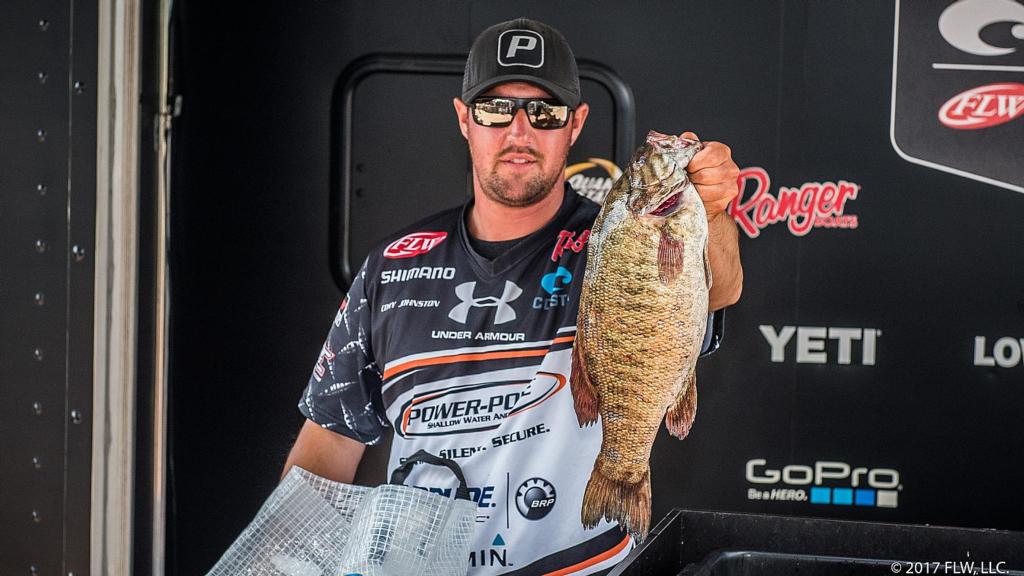 Cory Johnston was the first man to weigh in, and he set the bar high on day one of the Costa FLW Series presented by Evinrude on the 1000 Islands. Leading off with 23 pounds, 7 ounces of smallmouths plucked from Lake Ontario and the St. Lawrence River, the FLW Tour pro leads by 9 ounces over fellow Tour pro Kurt Mitchell.

“It went a little better than I thought it would,” says Johnston of his effort on day one. “I wasn’t sure how big my deep fish were. I knew there were 4-pounders, but it turns out there were some 5-pounders mixed in.”

Johnston is as local as they come, and between he and his brother, Chris, the pair has hundreds of days on the water at the 1000 Islands. Because of that, the leader from Cavan, Ontario, had plenty of options.

“I started in the river and then made it out to the lake and caught most of my fish there,” says Cory, who hasn’t decided on a plan for Friday yet. “The wind is supposed to switch directions, and I have a lot of stuff that should be sheltered. But I might just go back to where I caught them today. I’m going to have to see what the wind does in the morning.”

Cory says he fished both shallow and deep, and landed 10 or 12 solid fish. He did lose a key 5-pounder late in the day. Fishing a deep spot in the river, the big smallmouth broke his line after surfacing near the boat.

Mark Babcock of Warwick, N.Y., got off to a great start with 20-12 on day one to lead the co-angler side. He’s nearly 4 pounds ahead of Joshua Mossey, who is in second with 17-1.

“It started off pretty slow, but when the sun came out they started biting,” says Babcock. “My boater had us on a real nice rock pile, and it was just basic smallmouth stuff – drop-shots and tubes.”

Fishing with Lee Black, Babcock had the hot hand, and says he caught about 15 bass in all.