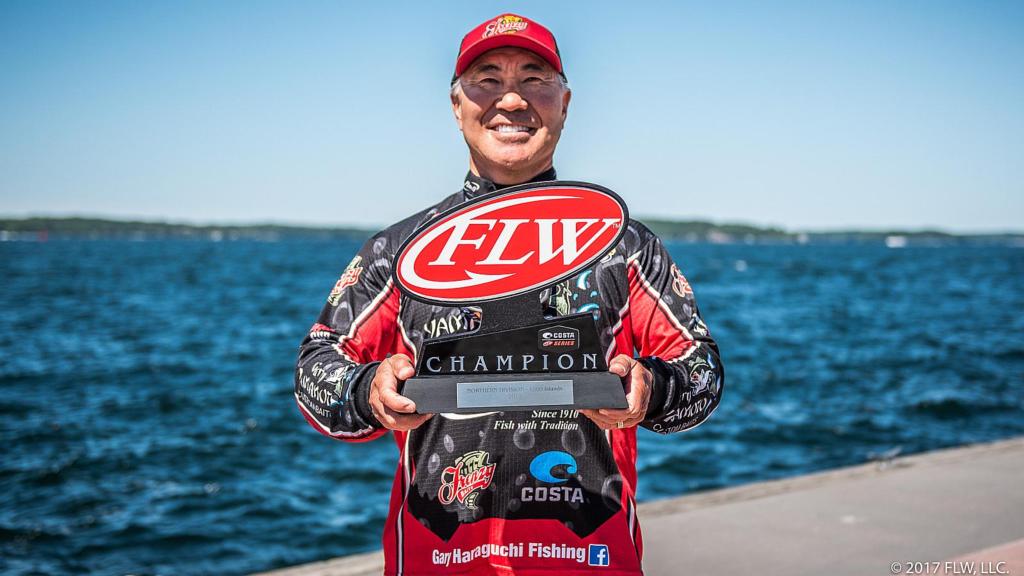 Gary Haraguchi has had a heck of a season on the water. Just last month the veteran co-angler finished off the FLW Tour Co-angler of the Year title and followed it up with a top 10 in the Costa FLW Series Northern Division opener on Champlain. This week at the 1000 Islands, Haraguchi kept rolling with big bags the final two days to earn his first Costa FLW Series win. Weighing 10 pounds, 15 ounces on day one, 19-10 on day two and 22-9 on the final day, Haraguchi totaled 53-2 and earned a new Ranger Z175 with a 90-hp outboard and $5,600 cash. To top it off, Haraguchi now holds the lead for Northern Division Co-angler of the Year by 25 points.

Becker’s winning pattern on the pro side

Haraguchi practiced with FLW Tour pro Kurt Mitchell, who also made the top 10, and the two actually fished together on the final day.

“This is my first time here. We went out and pre-fished, and actually had a pretty terrible practice,” says Haraguchi. “We caught some OK fish, but not very many of them. But it was just a totally blessed week.”

The big story for Haraguchi was a miraculous limit on day one. His pro, Jason Kervin, suffered a breakdown on the way out into Lake Ontario. Haraguchi estimates that it took them three hours to idle back to takeoff, which shot most of their fishing time.

“We just hit a handful of spots on the way in that looked good, and I caught a limit,” says Haraguchi. “It was only 10 pounds, but that’s what got me here, just catching that limit.”

On days two and three, Haraguchi headed out into Lake Ontario with Frank Ippoliti and Mitchell, and he sacked ’em to move his way up the leaderboard each day.

Haraguchi says he used two baits primarily, both in green pumpkin. The first was a Yamamoto Shad Shape Worm on a drop-shot, and his second weapon was a 5-inch Yamamoto Pro Senko rigged wacky style on a 5/16-ounce Frenzy Baits Whack-A-Sack.

“It feels great,” says Haraguchi of his win. “I feel totally blessed and really humbled to win this. After breaking down the first day I thought this was one to survive. I can’t really believe it. It’s an awesome feeling.”