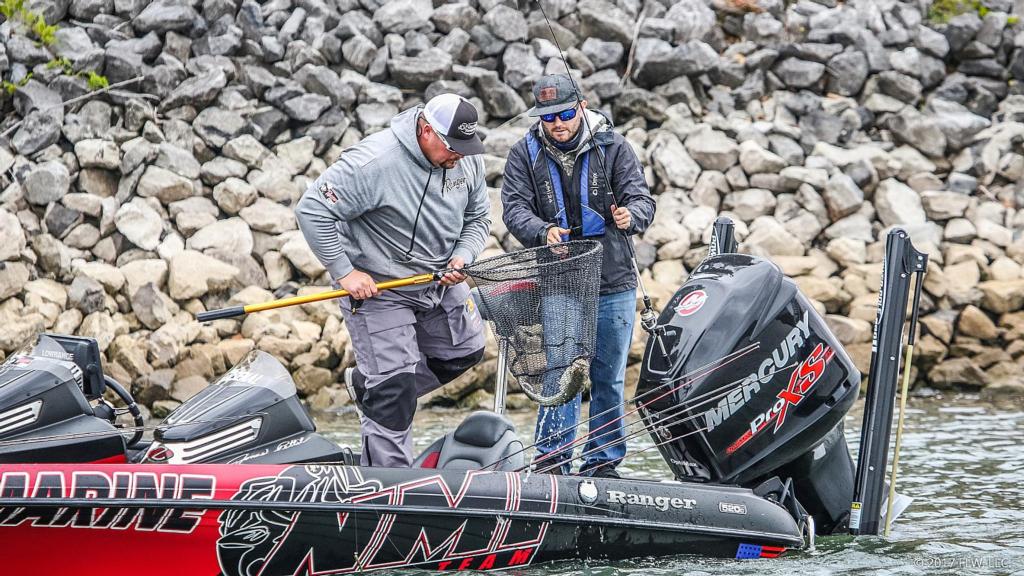 Well, it was a tough day one at the 2017 Costa FLW Series Championship, but there are a lot of hammers that we didn't catch up with today, and someone surely put together a good stringer. Case in point: We got a last-minute report that Sheldon Collings has a solid limit of 19 to 20 pounds, which puts him in position as the unofficial leader.

The weather forecast is for a continual warming trend the next couple of days. With those conditions, give the best bass anglers from across the country a little time and they'll eventually figure these fish out. For now, stay tuned to FLWFishing.com for more photos in the day one gallery (click here), and be sure to join us for FLW Live from weigh-in at 3:30 p.m. CT.

Local ace Cole Floyd is still sitting on a big zero for the day, but fellow Tennessee River stick Buddy Gross has had better luck. He's fishing the main lake and back in the creeks and has a 5-pounder and 4-pounder in the livewell. He just lost a 7-pounder at the net, so apparently Gross is on the trail of some hawgs.

It seems pretty tough to get over the hump of an 11- to 14-pound limit, and the number of pros in that range keeps increasing. Lendell Martin Jr. just joined the ranks with a 12-pound stringer. Conditions seem to be holding steady, save for stronger winds building out of the south. Overcast skies continue to look as if rain is on the way, but the only precipitation to speak of thus far has been a light mist now and then.

The lanky Texan has one in the livewell, but he says it's about to go down, between now at 2:30. He didn't say why, but why would you doubt him? Dude's a hammer.

Another hammer, Bryan Thrift, has a pair of keepers in the livewell. Expect him to have a top-20 limit by day's end.

If you're checking for updates on your lunchbreak, and we hope you are, here are some recent reports:

Western pro Scott Hellesen has a pair of small keepers.

John Duvall of Georgia has a big smallmouth in the box, but he's being outdone by co-angler Justin Hicks, who has three keepers for 13 to 14 pounds.

Oklahoma's Chad Warren is working the topwater program with some success. He has three in the livewell for 8 or 9 pounds.

Darren Gallaher, of Tennessee, has a limit in the livewell for about 11 pounds. He's rocking a spinning rod and fishing slow.

Georgia's Tim Vanegmond has three 3-pounders in the livewell.

Peter T has four keepers for about 8 pounds. He's junk-fishing and chucking topwater on the main lake.

Oklahoma pro John Soukup has a limit worth about 11 pounds.

Brandon Perkins has three little ones in the box.

Main lake or creeks? That's one of the big questions pros have had to try an answer in practice this week, but it looks like the verdict is still up for debate. This morning, most of the field was focusing on main-lake areas, fishing bars and points primarily. In the last hour or so we've seen a lot more action in the creeks. The action in the creeks hasn't really proven to be any better, but it's still something to watch.

Albert Collins recently checked in with two keepers. His co-angler, Gary Haraguchi, has three keepers. Haraguchi has had a fantastic season. He won the FLW Tour Co-angler of the Year and the 1000 Islands Costa FLW Series co-angler title.

FLW Mexico angler Sergio Garzavara has two keepers. He broke off a big one on a topwater and had to borrow a spare from his co-angler partner.

Charley Slaton of Oklahoma checks in with one keeper as well. 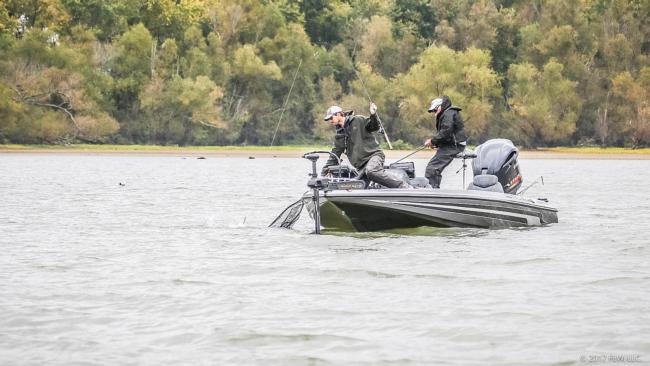 Fishing might be tough on a lot of people right now, but Bradford Beavers isn't one of them. He added another pair of 3-pounders, plus a 4-pounder, and now has a limit for about 16 pounds. He's probably sitting in pretty good shape to contend for a top-10 spot today, but he has a long time left to fish. Fifteen pounds per day could be top-10-cut range this time of year on Kentucky Lake.

Arizona pro Jim Shaw is making the most of his trip to the East with an early limit that reaches into the teens.

Pennsylvania pro Travis Manson jumps into the unofficial lead with a limit for about 13 pounds. That's a couple pounds better than Bill Chapman.

The wind has picked up a little, and it looks like it might rain in Paris. Maybe a little weather change will get these fish to start chewing.

Timmy Thompkins checks in with a keeper, as does Scooter Griffith, who has combined with his co-angler Yasuhiro Okada to catch about 14 short fish. Griffith is fishing a spot where he caught a 7-pounder in practice. Kazuki Kodama has a pair of keepers, and so does Bradford Beavers. Beavers' fish weigh about 3 pounds apiece.

One of our media crew members down at New Johnsonville reports that the current is ripping through that stretch of lake. It's a narrow area, so the current is sometimes exaggerated, but that's still a good sign. Current is almost never a bad thing on the Tennessee River.

Lastly, there's a passel of bald eagles soaring over the river. If you like to bird watch, you might want to come down to Kentucky Lake this winter. There are thousands of ducks, pelicans, eagles and more to see.

Bill Chapman, the veteran pro from West Virginia, has worked his way up to an 11-pound limit with a nice flurry of activity. His is the heaviest weight we've heard of so far.

Water clarity is a little lower today than in practice due to recent rains, but it's definitely not muddy. The lake is also calm enough to run anywhere.

We just got a report from the New Johnsonville area that more boats are showing up in that section of the lake. It sounds like quite a few pros started south of Paris and fished their way to New Johnsonville.

"It's just about as bad as I've seen this lake." – Austin Brown, Kentucky Lake local from Benton, Ky.

If Brown is complaining, then you can bet it's tough out there. West Virginia pro Bill Chapman isn't worried, though. He has three keepers in the box and must be around some big ol' shad because his co-angler has landed four shad in his last five casts.

Dakota Ebare of Texas has a pair of keepers for 7 pounds. His co-angler, Austin Baskette, landed a 5-pounder. It sounds like they're around some really good fish. 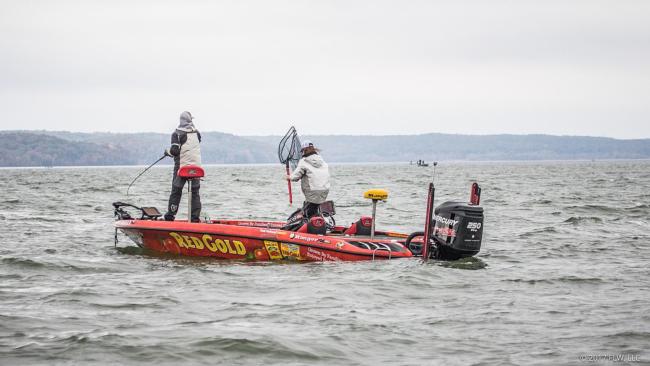 Steven Johnston is feeling the pressure right now … the fishing pressure. Despite its massive size, Kentucky Lake is fishing really small right now. Apparently everyone got the memo that the lake's southern reaches are where the best action can be found. Johnston says he has four or five spots he'd like to fish, but he can't stand to get in line and fish among the crowd of boats that found the same places. This might be one of those derbies where timing and rotation are critical to success, or where boat draw has a major impact on the outcome.

There's not much else to report right now. It's a big field, and we're trying to track down some anglers with fish catch reports. Stay tuned. We'll be updating every 30 minutes or so. 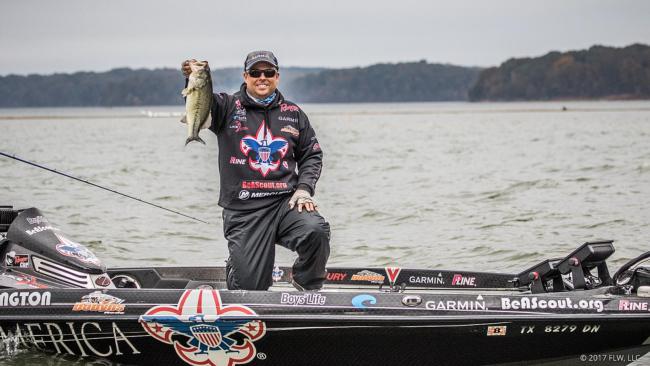 The River2Sea Whopper Plopper seems to be the No. 1 choice of many anglers this morning. And topwater in general is the go-to tactic for the bulk of the field. It's paying off for some. Missouri co-angler Craig Hulsey, fishing with Travis Fox, has a 3-pounder in the box. Pro Tom Redington has a 4-pounder and experienced a near miss when a 5-pounder followed his swimbait to the boat but didn't eat.

Local favorite Cole Floyd, who won the BFL Super Tournament here a few weeks ago, is fishless at this point. 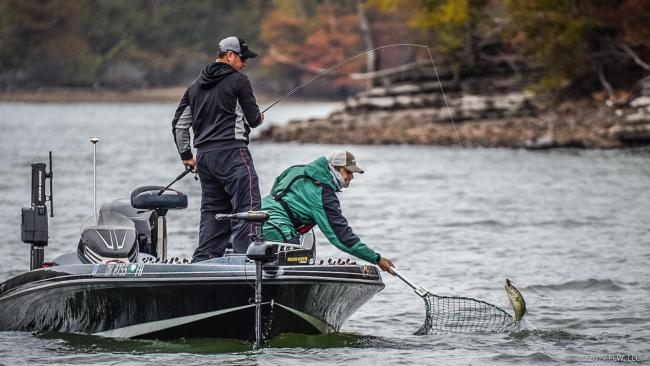 As expected, there's a decent morning bite today. FLW Canada qualifier Cooper Gallant has made the most of it by boxing a 4-pounder early. Gallant has been in Tennessee for a few weeks, preparing and waiting for competition to begin. He had a good practice, and he's hoping to parlay it into a Forrest Wood Cup berth.

Nick Prvonozac is also on the board with three keepers, though they're small. He has maybe 7 pounds. He's fishing a jig and an umbrella rig on the main lake.

Umbrella rigs played big time the last time the Costa FLW Series Championship was held here in 2011. Dan Morehead used one to win the derby, setting off a fall and winter fishing season on Kentucky Lake that was dominated by the multi-lure rig, both in tournaments and recreationally. We'll see how effective it is this week with slightly higher water temps than in 2011.

Elsewhere, Bryan Thrift, Travis Fox and Vu Au are all fishless so far. Anglers should all be at their starting areas, even if they made long runs to Kentucky Lake's far northern or southern waters. 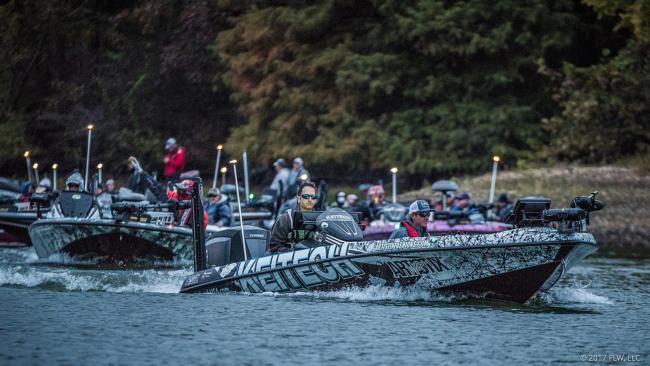 Mild winds and a 64-degree air temperature is a vast improvement over the conditions that anglers faced during practice for the 2017 Costa FLW Series Championship out of Paris, Tenn. In fact, conditions at takeoff on day one of the competition are just about perfect for a fall derby. And if expectations are right, the uptick in temperature in the wake of a cold front that brought frosty, blustery conditions in the preparation round might lead to a strong improvement in fishing productivity. We'll find out this afternoon at 3:30 p.m. at Paris Landing State Park when the first flight weighs in.

All told, 192 pros and co-anglers are fishing it out for two days to try to make it into the final-day cut. Eleven Forrest Wood Cup slots are at stake, but they won't come easy.

Kentucky Lake in the fall can be a challenging fishery. A seasonal drawdown has left many areas dry, and made navigation tricky. Baitfish are on the move, too, which means the bass are moving with them. There are multiple patterns in play, from throwing topwater on main-lake bars to fishing deep structure to cruising the backs of shallow pockets and creeks with lipless crankbaits and spinnerbaits. Fish aren't really grouped up in big schools this time of year like they were in the summer, so pros will need to cover a lot of water to put together strong limits.

Most of the recent tournaments on the lake have been won far south of Paris, where the lake begins to narrow into a river again. That's where most boats headed this morning, after hanging a right out of Paris Landing. It's a big reservoir at 162,000 acres, but it might fish a bit small today.

Format: All pros and co-anglers will compete for two days. The field will be cut to the top 10 pros and co-anglers after day two, with the winners determined by total cumulative weight for three days. Forrest Wood Cup berths go to the top pro finishers from each of the five U.S. Costa FLW Series divisions, as well as the top finisher from the International Division. The next five highest finishing pros, regardless of division, also make the Cup.