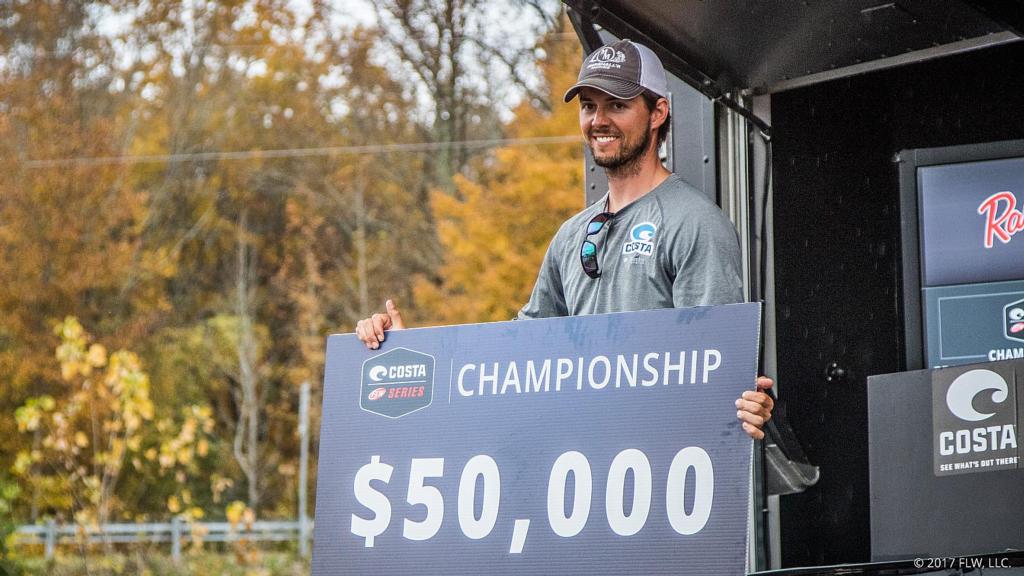 On a tough and topsy-turvy Kentucky Lake, Bradford Beavers ground out about 15 pounds per day and came away with his first big win in the Costa FLW Series Championship. Totaling up 15 bass for 45 pounds, 12 ounces, the up-and-coming Ridgeville, S.C., pro earned a $50,000 prize package and qualified for the Forrest Wood Cup for the second year in a row. 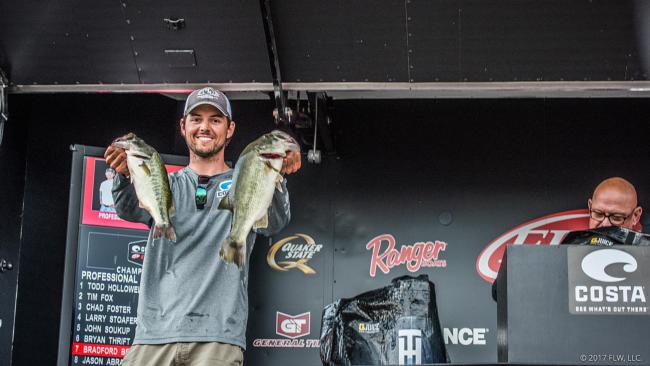 Beavers started decently and managed to stay consistent every day, basically playing the shallow bar game that Kentucky Lake is known for in the fall. He essentially had two or three spots that produced for him the whole tournament, with one real sweet spot, and he found them all on the last day of practice just north of New Johnsonville.

“I wanted to fish down there because I saw it had more shallow water, and that’s where the grass used to be from what I read,” says Beavers, who needed 35 hours in practice to catch his first keeper. “But when I saw the forecast I was a little bit scared of the wind. I know it gets rough out here, so I practiced the first three days within reasonable range. It was so bad, I talked to my dad every night and said, ‘this could be embarrassing.’ It was that bad. So, I said to heck with it, I’m gonna go where I want to go. And I caught three fish and found that spot.” 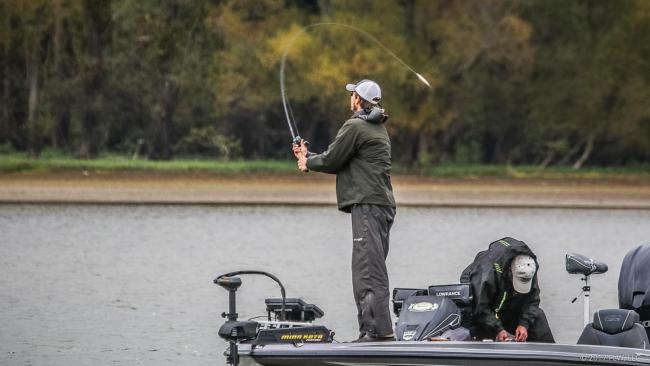 Beavers’ three spots were nothing too remarkable – shallow bars (one with some stumps, two without) on the main lake, but not right on the channel. Beavers estimates he caught most of his fish in less than 2 feet of water. Though the places were unremarkable, he did try and avoid pressure somewhat by staying on the back of his bars, where he figured fewer people had gotten to, and he also tried to be super stealthy.

“I had to run my trolling motor on like 25 to keep from spooking them,” says Beavers. “Every once in a while you’d spook one with the boat and see the puff of sand with him going by. It’s hard to be that stealthy in shallow water, but I tried move low and take advantage of the wind and use the Power-Poles. I covered my best spot yesterday and spent six hours to go 300 yards to get 15 bites.”

Beavers did the majority of his damage off one bar the first two days. On the final day, he split his efforts between it and his third spot. 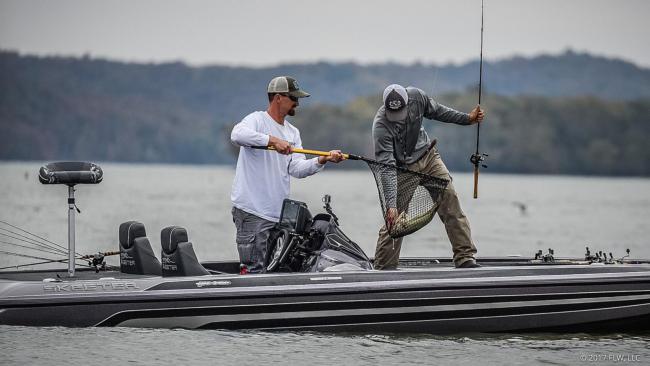 Throwing a bone and chrome-colored Heddon Zara Spook accounted for his fish on days one and two, but he made a key change to a pearl white Zoom Magnum Fluke midway through the final day.

“Yesterday I had 15 bites and only caught six of them. Today I had 12 and caught six of them,” says Beavers. “They got very smart in that spot. This morning I’d throw the Spook out there and they would blow up behind it; they wouldn’t even hit it. So, I picked up a Fluke, and right away I caught one, and then I had three other bites on it and I lost them all. So, I changed how I rigged it, and it caught two more there.”

Starting out with his Fluke simply Texas-rigged worked for one fish, but adding a treble hook as a trailer was the change that enabled Beavers to win. After finishing out his best spot, he moved on to spot No. 3 and finished his limit and culled with a 4-pounder.

“I’m speechless. I never thought I’d win one of these,” says Beavers. “I won a BFL this year, and I thought that was unbelievable. I’ve been in the top 10 in four of these, and my fish have always fallen off on the last day. It’s just unbelievable.”

FLW awarded 11 spots in the 2018 Forrest Wood Cup to top finishers at the Costa FLW Series Championship. The first six went to the highest finishing pros from the five U.S. divisions and the International Division. The remaining five went to the next five highest finishing pros regardless of division. Bryan Thrift, who already qualified for the 2018 Cup for winning the 2017 FLW Tour Angler of the Year, earned a double qualification, and so FLW extended an additional Cup invitation to the next angler down the standings at the Costa FLW Series Championship.