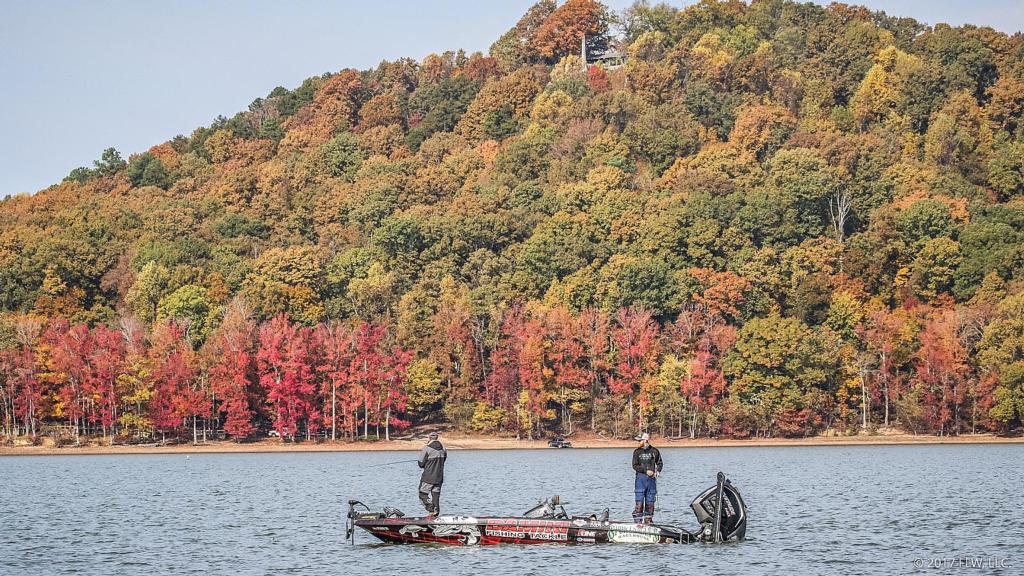 We're uploading photos and filing the final updates here in anticipation of weigh-in, which begins at 3:30 p.m. So far, we know that Bradford Beavers has had a solid day, and that Todd Hollowell is right on his heels.

The most recent fish catch report comes from Fox, who now has two small keepers. This derby is still knotted up tight, and there's enough time for someone to make a move up the ladder. Find out who can get it down by wathing FLW Live at 3:30 p.m. CT on FLWFishing.com.

Thanks for following along with the coverage at the 2017 Costa FLW Series Championship on Kentucky Lake in Paris, Tenn.

Bradford Beavers is in the driver's seat now. He has a limit for 11 pounds. Three of those keepers have come in the last 20 minutes. He has not culled, but is currently the unofficial leader. Beavers is fishing the flat outside of Harmon Creek. His co-angler, Gabriel Scott, just boxed a pair of keepers, so it sounds like he's getting dialed in. They're both walking the dog with topwater baits.

We know for sure that Soukup has just one keeper. His co-angler, Gary Haraguchi, has zero.

More importantly, we just heard a rumor that Beavers is culling. He slipped off our radar for part of the day, but one of our reporters just found him and is getting an update. If he really does have a limit then he might be the new leader. We'll keep you posted.

Slightly less than 5 pounds separated Todd Hollowell in seventh place from tournament leader Chad Foster coming into today's final round of competition, and that margin was nothing for Hollowell to make up with just his second keeper. He just boxed a fish that will go 3 1/2 to 4 pounds. He has two for at least 8, possibly more. He's our unofficial leader, and although he probably doesn't know that fact, Hollowell did quite a bit of fist pumping, hooting and hollering when he landed his second keeper. He knows he still has a fighting chance for the comeback.

Michael Matthee came all the way from South Africa to compete on Kentucky Lake this week, and he's already earned a spot in the 2018 Forrest Wood Cup because of his top-10 performance. Now, he's hunting for a win. Matthee will need to pick it up if he wants to make it happen. He has one small keeper in the boat. Coming into today, he was 6 pounds, 5 ounces behind Foster. 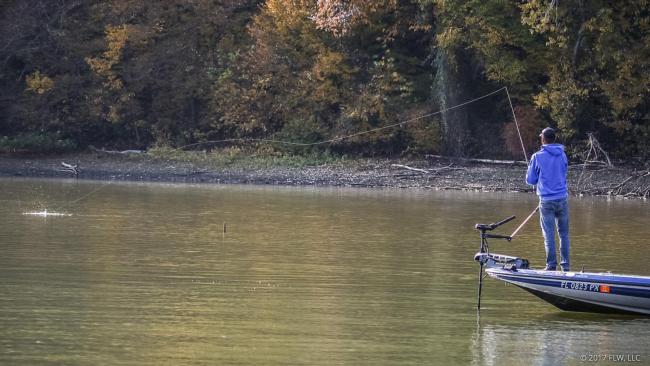 It looks like tournament leader Chad Foster has gone as far south as he's going to go. He was well past New Johnsonville, all the way to the Beech River area near Decaturville, which is south of the 412 bridge. He's now back between 412 and and 40. Stoafer is the only other angler south of 40.

A 3-pounder keeper has Stoafer on the board. That's his first fish.

Elsewhere, Foster has landed a short fish and nothing else. He just swapped for a square-bill crankbait to try and get something going.

Abram has made his way back to the spot where he started his milk run. He just has the one little keeper in the livewell.

We're shifting some of our on-the-water reporters around to get updates from the rest of the field. Stay tuned.

Other than the tough fishing, there's not much to complain about in west Tennessee today. The sun is out, a light breeze is blowing and it's a beautiful day. Anglers are shedding their bibs and jackets and getting after it with various topwater baits.

Foster has recently moved again but still can't get a bite. Hollowell is chucking a Whopper Plopper. And Stoafer is fishing his fourth creek mouth. "Fellas, everything is right. I just don't know why they aren't biting," Stoafer says.

There's a steady flow of current. The water has stabilized following yesterday morning's storms. It's only a matter of time, hopefully, before things pick up. 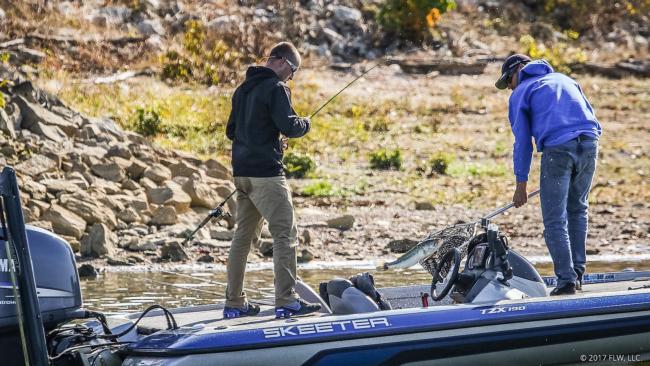 Co-angler Justin Hicks of Roanoke, Va., just landed a 3-pounder that might have iced the victory for him. He was up by more than 7 pounds coming into today. It'll take a real effort to catch him.

The current is rolling pretty good today. That should help the bite, though there's still very little wind, and wind is one of the key factors in the topwater bite here this time of year.

Guys are still moving around, trying to figure out a tough bite. Topwater is the dominant pattern in the top 10, for sure. But flipping and throwing ChatterBaits and spinnerbaits have also helped a few to make the cut.

The action is still pretty slow this morning. The sun's out, though, so at least it's a pretty day to be on the water.

Abram and Foster have both hit three spots so far. Stoafer, meanwhile, has been glued to a large flat near the 40 bridge. All three are still stuck on zero.

UPDATE: Shortly after this post was made, Abram boxed a line burner. He's on the board with one. 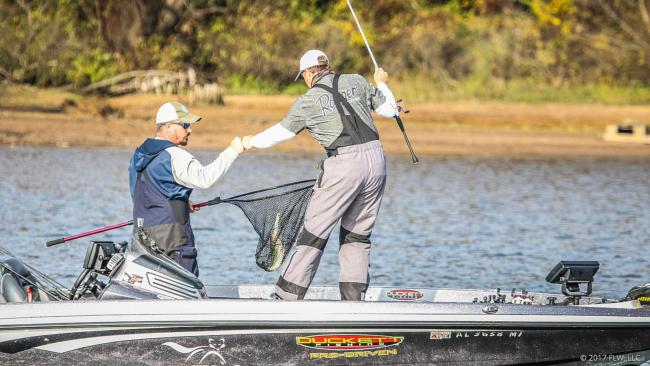 After spending about 30 minutes poled down on a shallow flat, Fox finally put his first keeper in the boat. The fish will go about 2 pounds. He's still in the back of Big Sandy.

Foster, the leader, has left his starting area without a keeper.

The top 10 are spread out from the 68 bridge near Kenlake State Park in Kentucky to the 40 bridge south of New Johnsonville.

Tomato man Todd Hollowell is the first person on the board on day three. After switching up to a walking topwater, he quickly landed a nice keeper – 4 or 5 pounds.

Todd Hollowell is moving and grooving. He's at his fifth spot now and has thrown nothing but an umbrella rig.

Tournament director Ron Lappin sent the anglers out at about 9:20, and his timing was spot on. The sun is now shining bright, and the fog is only a memory. It's time to settle this derby.

Tim Fox, John Soukup and Michael Matthee all started the morning in Big Sandy. Fox is in the back, chucking a topwater on a shallow flat.

It looks like the fog delay is almost over. They should begin idling out at about 9:20. The report from New Johnsonville is that the fog was much lighter down there, and visibility has been much higher since 7:30. With it clearing up in Paris, we'll be good to go. 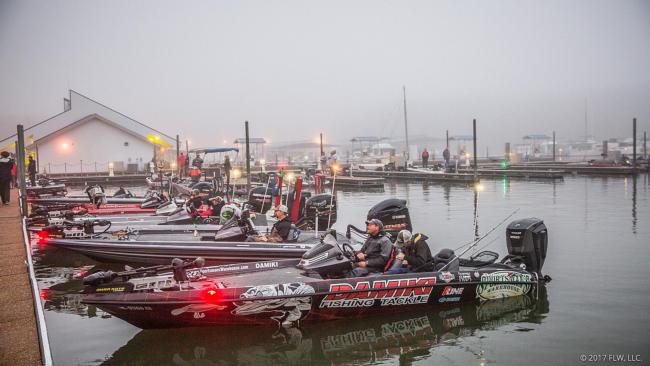 A thick layer of fog has settled into the Tennessee River Valley this morning, and it has the top 10 pros and co-anglers sidelined on the final morning of the Costa FLW Series Championship on Kentucky Lake out of Paris, Tenn. According to the dock talk, the National Weather Service predicts that the fog will lift by about 8 a.m., but that's an optimistic prediction, and likely doesn't apply to the lake, where fog tends to linger even longer. This delay might go a full hour past the scheduled 7:30 a.m. start time.

The delay probably isn't too much of a factor for pros today. Most of the top 10 pros caught their better fish mid- to late in the day, with a couple of exceptions, and most are fishing between Paris and New Johnsonville, which is about 30 miles south. A couple are running more than an hour, but that's not the norm across the top 10.

A lack of wind is a bigger issue. The topwater bite has certainly been better with at least a touch of chop on the water, but there ain't even a breath of wind this morning at Paris Landing.

Stay tuned to see if Chad Foster can hang onto his lead, or if Bryan Thrift can put together another big bag and take it back. We'll keep you posted here and on social media. You can follow FLW at @FLWFishing.

Format: All pros and co-anglers will compete for two days. The field will be cut to the top 10 pros and co-anglers after day two, with the winners determined by total cumulative weight for three days. Forrest Wood Cup berths go to the top pro finishers from each of the five U.S. Costa FLW Series divisions, as well as the top finisher from the International Division. The next five highest finishing pros, regardless of division, also make the Cup.