Shallow, Deep and In-Between in Play for Toyota Series Opener on Sam Rayburn 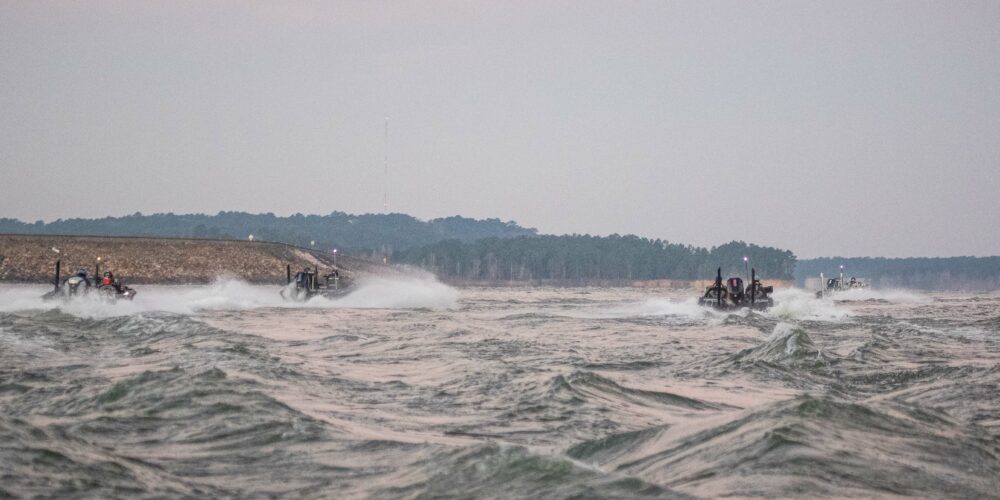 Sam Rayburn Reservoir has become a wintertime staple for MLF tournaments over the past several years, so it’s fitting that the Toyota Series presented by A.R.E. will get the 2021 season rolling this week on the famed fishery. Rising water, a cold front and a full moon may present some interesting challenges to the field this week, but still, the Southwestern Division opener presented by Berkley should see both quality and quantity put on the scale.

At more than 114,000 surface acres, Sam Rayburn is the largest reservoir wholly within the state of Texas. And it’s as legendary as it is big. Rayburn is perennially one of the best bass fisheries in the country, as well as one of the all-time great tournament destinations.

One of the main reasons Rayburn is such a draw for tournament anglers and fishing enthusiasts alike is that it’s an easy 20-plus-pound lake, where limits that weigh in the upper 20s are common. Heck, limits weighing over 40 pounds have become commonplace the last two seasons on Big Sam. It also doesn’t hurt that you legitimately could catch a 10-pounder on nearly any cast.

The lake is a flood-control impoundment, so it does experience high- and low-water years, fluctuating roughly 7 feet throughout a typical season. Currently, the lake is on the rise and is roughly 1 ½ feet below full pool.

The offshore bite has been the deal over the last several weeks on Rayburn, but recent rains have the lake creeping towards full pool. Because of that, fish that were hunkered down on points and brush out deep are now starting to think about moving towards the bank. Tackle Warehouse Pro Circuit pro and Rayburn aficionado Nick LeBrun agrees.

“I like fishing Rayburn when it’s a lot of specific casts, like pinpointed schools of fish that are in 10 feet or less,” LeBrun says. “But I’m not really finding that right now. What I’m finding is you find a general area and commit time to it and reel your bait like there’s a 5-pounder following it every cast and you might get seven or eight bites.

“It seems to me, from talking to close friends of mine that have put in their time and from what I’ve seen, the guys that are catching big stringers out deep are real inconsistent. They’re there one day and gone the next. A lot of these big stringers on Rayburn right now are nomadic.”

Local guide and Texas hammer Stephen Johnston believes that rising water coupled with warm temperatures and the full moon also have something to do with the weird bite.

“For me, my biggest deal isn’t catching fish, but catching the size I want,” says Johnston. “You can get one good one – maybe one 6- to 8-pounder a day. The fish were grouped up pretty good a week ago, but we got some rain and lake is coming up and those fish are going up with it.

“In some areas the water temp is 55 degrees and in some places it’s 60. We’re on a full moon, too. Yes, it’s January, but I think a lot of fish that are up shallow are trying to sit on a bed. It’s not something where you’ll be able to sight fish ‘em. But some of the guys throwing a Senko or wacky rig around could land a big bonus.”

So while the 40-pound limit caught in the Phoenix Bass Fishing League presented by T-H Marine event a few weeks ago on Rayburn was an offshore deal, Johnston thinks the likelihood of that happening this week is slim. Sure, someone could hit the right rotation tomorrow and bust 30 pounds, but in his eyes it’ll take a combination of shallow and deep or all shallow to get it done.

“We’ll see a lot more shallow stuff this week,” Johnston says. “From 8 feet to the dirt. There will be a few guys, like myself, pull up and throw on history offshore, but from what I’ve seen so far I can’t even get bit doing that. That’s deep stuff here – when water starts rising they get off the bottom and start swimming.

“Really, the water steadily coming up hurt the offshore bite. Rayburn right now is at a funny stage. There’s not water in the bushes and just a little on the inside grass line. So those fish are jammed on the edge of hydrilla, which covers about 80 percent of the lake right now.”

LeBrun is right there with Johnston in that anglers are going to need to keep the offshore bite honest, but keep grinding up shallow.

“I think for whoever wins this, it’s going to be a deal where you’ll have to mix in some deep stuff and hope you land on ‘em one day,” LeBrun adds. “You’re not gonna 5-pounder them to death right now I don’t think.”

Since bass could easily be caught anywhere from 30 feet to 3 feet this week you can expect to see a bit of everything in the mix.

Offshore, a big crankbait and football jig are hard to beat. Though, a Carolina rig with a Zoom Brush Hog or a french fry can make headlines too. Shaky heads and drop-shots will likely catch fish, but may not be a primary pattern.

Closer to the bank, lipless crankbaits and hydrilla go together like peanut butter and jelly, so be ready for those to be heavy hitters. Spinnerbaits, swim jigs, crankbaits and vibrating jigs will also be popular options. Weightless Senkos or wacky rigs should also account for some big bites from staging fish in hydrilla.

According to Johnston, today’s cold snap may be the biggest hurdle of the week.

“The biggest deal is the cool front that hit yesterday,” he says. “We’re going to have highs in the low 50s today, which will bring the water temp back down and guys will have to slow down. With these Florida fish in here, it’s going to make a difference.”

While a cool snap could slow fishing down some, Johnston says there are plenty of fish up shallow right now and because of that guys will still catch them. LeBrun hopes that’s the case.

“I’m really hoping with the way the wind has been and the warmer weather we’ve had a lot of fish are going to be making a big push shallow and pile up in that prespawn mode like I like,” LeBrun says.

As far as a winning weight goes, the general consensus is that somewhere around 60 to 65 pounds should bring home the bread.

“There are too many good people here for this tournament, so I’m gonna say 64, 65 pounds will win,” Johnston says. “Somebody can easily bust 30, then have a decent bag on day two and survive on the final day.

“The lakes at a good stage, but funky for this time of year. Still, the pond is in good shape and the fishing should be good.”