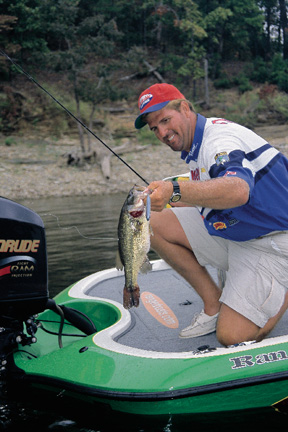 When the fishing gets down and dirty, stay on top of the action with a jerkbait.

A tried and true approach for fishing muddy water includes lures that generate strong vibrations, such as a throbbing Colorado-bladed spinnerbait or a bulky jig that bumps bottom and jostles through cover. Under these conditions, jerkbaits get little use because most anglers regard them mainly as clear-water “sight” lures that attract bass from long distances.

Apparently, Louisiana bass pro Sam Swett is out of sync with the rest of his competition. When confronted with dingy water, he often ties on a jerkbait. This may appear unwise, especially for a member of Team Fujifilm who is competing on the Wal-Mart FLW Tour, but Swett’s jerkbaits often coax heavy limits of bass into biting in stained water.

“I learned how to fish jerkbaits in the bayous of southern Louisiana,” Swett says. “Due, in part, to the saltwater influence, all we have down there is dingy water.”

Swett defines dingy water as anything that has less than 2 feet of visibility, and he often scores well on jerkbaits when visibility is scant inches. He grows more self-assured whenever he fishes dingy water. Should heavy rainfall suddenly muddy up a lake or river system during a tournament; he has trouble hiding his grin.

“I feel more confident when the water turns muddy,” Swett says. “It forces the bass into shallower water. No, I’m not going to go out there and catch a wad of fish, but I know I can catch five to eight quality bass a day on jerkbaits, which will help me place well in a tournament.”

Should the tournament site offer both clear and murky water, Swett opts for murky. On the Potomac River, for example, he has done well in tournaments fishing jerkbaits in stained backwaters. On impoundments, such as Lake of the Ozarks, Toledo Bend and Sam Rayburn, he has boated far up major creek arms to find dingy water in which to work his jerkbait magic. The latter strategy once garnered him a sixth place finish at a major professional bass tournament on Oklahoma’s Grand Lake O’ The Cherokees with a three-day catch of nearly 50 pounds.

Fishing jerkbaits in dingy water pays off for Swett throughout the spring and again in the fall, the two seasons that find the greatest numbers of bass frequenting the shallows. He begins fishing a jerkbait in the spring when the water temperature is in the mid-50s.

“A warm, sunny day in early spring pulls bass closer to the surface and makes them a little more active,” Swett says. “That’s especially true if the weather’s been cool and you all of a sudden get a warm, balmy day. Dingy water holds the heat and bass sometimes move up to within a foot or two of the surface. At that time of year, jerkbaits generally produce better on bright, sunny days.”

It was under these conditions that Swett discovered the effectiveness of jerkbaits in dingy water. He was flipping and pitching jigs to visible cover, as were most other anglers, and noticed a surface boil here, baitfish moving there and occasionally a glimpse of a ghostlike shadow. Were those bass up moving about just beneath the surface?

To find the answer, Swett began experimenting with lures that could be fished close to the top. The jerkbait provided the answer he was looking for. It could be fished in the shallow strike zone and slowly enough so that bass in cold, murky water could respond.

“The great thing about fishing a jerkbait in dingy water is I can catch bass behind anglers who are flipping and pitching,” Swett says. “They pick off bass holding tight to cover. The jerkbait catches overlooked fish that relate to shallow structure as opposed to cover.”

Swett regards cover as an object bass relate to, say, a flooded bush, windfall, stump, dock or weeds. He correctly uses the word “structure” to describe a change in the bottom contour. In this respect, Swett is one of few anglers who employ the term structure when speaking of shallow bass hangouts.

“Shallow structure is usually a little break in the bottom,” Swett says. “In other words, if I can find 4 to 5 feet of water that comes up on a fairly sharp break to 1 to 2 feet, bass will roam along that edge. There doesn’t have to be any cover there to hold them.”

While many anglers turn off their depth finders when fishing shallow water, Swett stays tuned to the bottom with the help of a bow-mounted Lowrance X75. The depth finder helps him locate subtle breaks most other anglers never look for, let alone fish. In many instances, when Swett finds bass scattered along such breaks, his boat will be sitting in 3 to 5 feet of water roughly a long cast from the bank. A key location in impoundments is where a creek channel swings close to a bank in the back of a creek arm.

“Sometimes the bank gives the bass away,” Swett says. “In the bayous of Louisiana, you’ll see a lot of banks that taper gently into the water, then you’ll come on a slightly steeper bank or a bank that has grass growing close to it. That tells you the bottom drops a little faster there. Those spots are often on the outside bends of rivers. In the backs of creeks in reservoirs, you may see a short bluff wall that clues you in to deeper water.”

On impoundments that feature gravel banks, Swett looks for short stretches of chunk rock between the gravel. The chunk rock usually lies adjacent to deeper water and attracts dingy-water bass.

In clear water, bass will come 20 feet or more to take a jerkbait, which allows you to space your casts a good distance apart and still adequately cover a given area. Since bass will not move far to take a jerkbait in dingy water, Swett leaves only about 5 feet between his casts and thoroughly combs every inch of what he deems to be likely bass water. If he sees feeding activity or senses that a particular spot holds a bass, he’ll work it with repeated casts and try various casting angles.

“I fish very methodically,” Swett says. “To avoid wasting time, I look for short banks with high bass potential, say, 20- to 50-yard stretches as opposed to a 100-yard stretch.”

This is not a pattern that yields quick limits of bass for Swett. A good stretch of bank may give up two or three bass. What the bass lack in numbers, they make up for in quality, typically weighing 2 to 4 pounds. Swett has taken bass up to 8 pounds fishing jerkbaits in dingy water.

“The Smithwick Rogue is my number one jerkbait because it has rattles in it,” Swett says. “I always use a floating Rogue. The suspending model dives too deep for fishing in dingy water. You want the lure to silhouette above the bass.”

To ensure the lure creates a highly visible silhouette, Swett avoids reflective silver finishes and relies on darker colors, including gold with black back and orange belly, dark watermelon, baby bass, and, sometimes, Firetiger. He casts the jerkbait with a 6-foot, 6-inch, medium-action graphite baitcasting rod and 12- or 14-pound test monofilament. Though heavier line won’t put off bass in murky water, Swett finds that it hampers the lure’s action.

“I twitch and pause the bait slowly,” Swett says. “I want it to be constantly dancing from side to side, but I try to keep it in one place. If you move it ahead too fast, the bass won’t have time to react in dingy water. I twitch it three or four times and work it down about 6 inches. Then I let it float back to the surface. It only moves ahead about a foot between pauses.”

Swett varies the retrieve cadence from time to time. If he feels the bass are especially sluggish, he’ll stick small weights onto the lure’s belly to slow its rise. But even with the weights, he keeps the lure within 6 inches of the surface at all times.

“The key is to keep the jerkbait silhouette above the bass and constantly in motion with short twitches,” Swett says. “Do that and you’re sure to trigger bites in dingy water.”