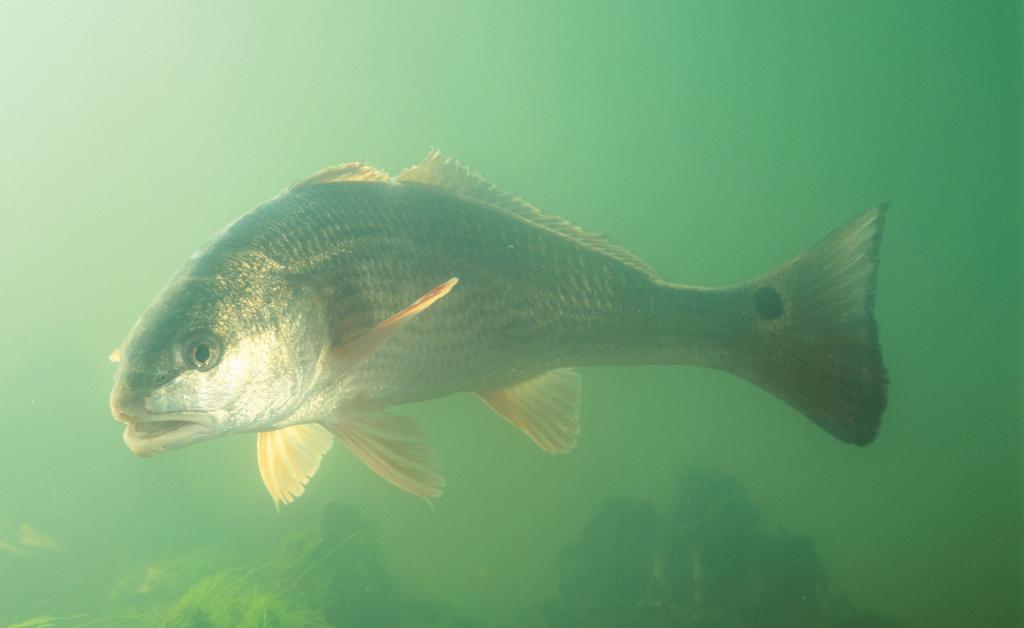 At the inaugural Wal-Mart FLW Redfish Series event in Sarasota, Fla., in 2005, the professional redfish team of Jeff Hagaman and James Goodwin won the historic event by fishing a “trough.”

Then came the first Wal-Mart FLW Redfish Series Championship in 2005, which was won by Team Folgers pros Todd Adams and Tommy Ramzinsky fishing “a river mouth.”

Throughout the 2006 season, Redfish Series victors again used phrases such as “ditches along the Intracoastal; a trough connecting two potholes; and drains coming off the flat,” to describe their winning patterns.

Tadd Vandemark and Blair Wiggins won the 2006 Redfish Series Championship fishing a “plateau in a river.”

So what happened to the redfish arts of poling the flats, sight-fishing the ponds or drifting the bays?

Those traditional techniques still apply, but what pros have proven through tournaments is that redfish relate to features within flats, ponds and bays. And many times those features are some kind of channel – from the subtlest of dips to the mightiest of rivers.

“The tiniest crevice in a flat is a trough to us,” explained Todd Adams of Rockport, Texas. “If we fish two miles of 2-foot flats and then suddenly come across a 50-yard-long gut or trough that’s 3 feet deep, we’re marking that spot on the GPS. It may not have fish in it when we find it, but chances are fish will use it at some point during a particular tide or season, and we’ll check it periodically.”

As bad as it sounds, even a prop scar through a grass flat can be considered a trough.

“On several occasions, we’ve watched a group of redfish move up onto a grass flat using prop scars as their routes across the flat,” James Goodwin of Palm Harbor, Fla., pointed out. “That’s not to condone prop scars, but rather to give some idea of just how subtle of a depth change redfish will use as a trough.” 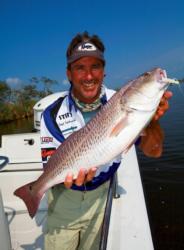 At the other end of the spectrum, Tadd Vandemark of Key Largo, Fla., has discovered not all troughs are subtle. Sometimes the biggest rivers are the best troughs.

“I consider anything that channels or funnels water, and consequently bait and fish, as a type of trough – from large rivers and tidal creeks to the smallest drains and ditches,” he added.

Like highways through the countryside, redfish seem to orient their travel along channel ways in the bottom. But finding the rest areas along those highways is the trick to making troughs pay.

The most successful redfish pros know reading the contours of troughs and channels are important to success. Though all types of channels serve as seasonal and tidal migration routes, there are places along those contours that serve as resting places – stopping points where a group of reds will pull in, let their guard down and, as some pros say, “get comfortable.”

In a way, troughs in the redfish world are like concourses at airports. Those people hustling up and down the corridors are worried about one thing: catching a plane. However, those travelers with four-hour delays can be found having lunch in the food court or enjoying coffee and a newspaper in the medallion room.

Given that analogy, redfish pros don’t fish on the concourses themselves; they are more interested in staking out the restaurants and medallion rooms.

“Finding creeks, ditches, troughs and channels is the easy part,” said Jeff Hagaman of Odessa, Fla. “Finding the comfort zones along those routes is the part that takes time and provides the payoff.”

When searching out comfort zones, redfish pros look for places along troughs that offer one or more of the key components: depth, bait and current deflection.

“In Florida, finding comfort zones requires finding depth along a route,” Goodwin suggested. “Redfish equate depth with protection. Remember, redfish are not exactly at the top of the food chain in the ocean. From the time they are fingerlings, they are hunted by birds and bigger fish – especially ospreys and dolphins. They grow up knowing not to venture very far from the security of deeper water.”

When Goodwin first noticed redfish using prop scars as troughs, he decided to follow the prop scars across the flat to see where they led. Several of the scars petered out, but two of the scars ended in a pothole.

The next day, he staked out near the pothole on the same tide and was amazed to see dozens of redfish arriving to the hole via the prop scars.

“Here’s the important part, though” Goodwin added. “Those fish were much easier to catch once they got in that pothole and settled down. The scars were the routes; the pothole was the comfort zone.”

“Redfish more or less have two modes,” Hagaman offered. “They are either in a mad dash to get to safer ground and greener pastures, or they are just lazing around in a big group, relaxed, comfortable and grazing on whatever comes by.

“Much of a channel, ditch, creek or trough is used for the first mode. But along that route, there are places where they resort to the second mode, which are the places you want to find.”

The spot where Hagaman and Goodwin won the first Redfish Series event was a similar scenario.

“Along this one trough, there was a deeper hole about the size of a pickup truck,” Hagaman described. “Once they got in the safety of that hole, the school would spread out, get happy and start munching. But if they were alerted or alarmed, they collapsed into a tight group and bolted down the trough. Needless to say, they weren’t very interested in eating at that point.”

Other redfish teams have found that current deflection, especially in rivers, is key to locating the “restaurants and medallion rooms” along the redfish concourse. 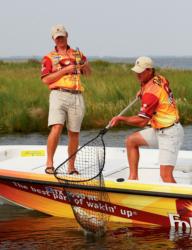 “At first, we were drawn to the area because of a large tidal river – an obvious corridor for migrating bait and redfish in the fall,” Adams said. “We used crankbaits to probe channel-swing banks, ledges and bars without success. We fished our way to the river mouth, where we noticed a series of sandbar points creating back-flowing eddies – and those eddies were just piled with bait. Mullet of all sizes were swarming in those back currents, and bingo, that’s where we found the fish. We had fished all along that river without a bite, but those eddies were loaded.”

Vandemark remembers finding his winning spot in the 2006 FLW Redfish Series Championship in the Escambia River.

“It had poured rain several days before the practice, and the river was ripping; there was strong current everywhere,” he said. “And I remember looking over and seeing this one piece of water near the bank that was hardly moving at all. It wasn’t really an eddy, but it wasn’t moving. In a river of swift current, it was totally slack.”

After catching a couple of key redfish – and, incidentally, largemouth bass – off the spot, what Vandemark discovered was an underwater “plateau” came up out of 18 feet of water almost to the surface and broke the swift current.

“Redfish and bass were using that structure as a break and just waiting back there while snapping up bait that was trying to escape the current as well,” he said.

Where the airport-concourse analogy falls apart in describing redfish in troughs is that the airport and its restaurants are open all day. Troughs and their corresponding comfort zones only happen at certain times, especially in regard to tides.

“That’s the tricky part,” Adams noted. “Troughs only work on certain seasons and tides. From a seasonal perspective, Tommy and I prefer the more subtle troughs and guts in shallow flats in the heat of summer and the bigger river systems dumping into bays during the cooler months when bait and redfish are more prone to big migrations.

“From a tidal standpoint, though, many troughs reveal their best hot spots on an outgoing tide.”

“That’s true,” Hagaman concurred. “Troughs and their comfort zones are very tidal-related. Most of our good troughs are best during falling water when those fish are coming off adjacent flats and seeking the protection of deeper water.”

“But in the case of the prop scars, that was a high-tide deal,” Goodwin noted. “Those fish were funneling up onto a flat and into holes during rising water. 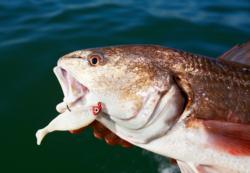 “The good news is when you find a productive comfort zone along a well-traveled route, make careful note of the tide and season. Chances are fish will always be there under those same conditions.”

Several teams pointed to the St. Augustine-Jacksonville area as the most poignant example of this.

“You can set your watch by those fish on the Northeast coast,” Hagaman said. “As they migrate in and out of the tidal creeks with the tide, they stop and hold at the same locations day after day. But the window of time at which they stay in those comfort zones is much shorter than on the West Coast where the tide is not as extreme.”

As Jeff Hagaman pointed out, finding migratory troughs, creeks, ditches and canals along inshore waters is not hard. Coastal topographic maps are a good place to start. Google Earth (googlearth.com) is a fantastic source for satellite images of coastal flats and bays.

But finding the comfort zones requires getting out on the water and following those routes until some physical characteristic involving additional depth, bait or current change stands out.

As Adams pointed out, those features may not be holding fish the day you find them, but checking them on different tides is the key.

“Some of the best spots Tommy and I have located didn’t have a fish around when we found them,” Adams said. “But we made a note of the spot, and when we returned on a different tide, fish were all over it.”

Personally, I’ve used the process laid out by Hagaman and Goodwin; Adams and Ramzinsky; and Wiggins and Vandemark to find some great redfishing spots along Florida’s Panhandle.

Since the water is relatively clear on Florida’s Gulf, Google Earth provides excellent images of migratory routes like tidal creeks, channels through flats, and parallel bars and troughs along beaches and bays.

After studying these on the computer, I spend a day on the water following these routes. But instead of fishing, I spend more time covering water, looking for irregularities and marking holes in creeks, big oyster bars along channels and “blow-throughs” in sandbars that connect the paralleling troughs along beaches.

If I happen across redfish while exploring the routes, it’s a bonus.

When I return the next day, that’s when I spend time studying and fishing the places I marked, rotating them at different tides throughout the day to see if fish are using them as comfort zones.

The effort takes several days and may seem tedious, but it has paid dividends with some great redfish, and incidentally, trout hot spots. 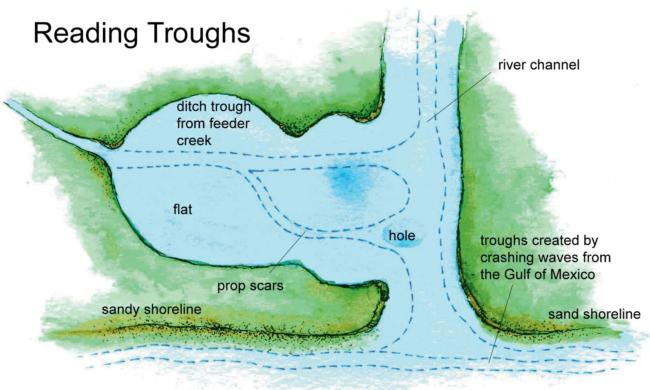