How to make the most of this super-simple, super-effective finesse rig 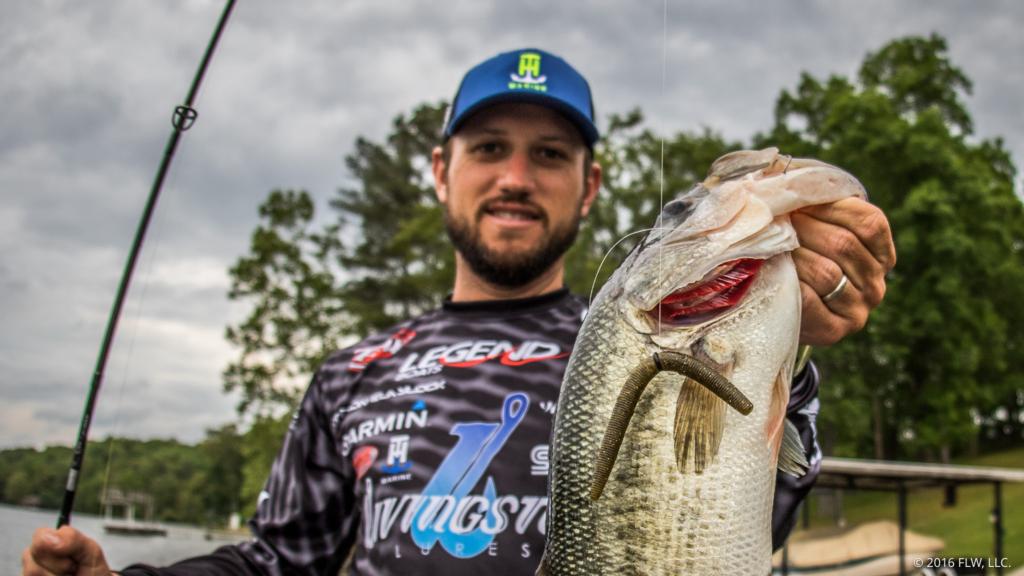 From March until the end of the fishing season I’m going to have a wacky rig on deck. It’s a really effective way to fish anytime the fishing is tough, or if the fish are up cruising banks. Anytime fish are about 5 feet deep or less, I can catch them on the wacky rig.

Most of the time I throw it on a 13 Fishing Envy Black spinning rod. It’s 13 Fishing’s finesse rod, and it’s really soft. I don’t need any fight to the rod. I want it to be as soft as possible.

Basically, I throw it on 20-pound-test Seaguar Smackdown braid and an 8-pound-test Seaguar InvizX leader with a small hook. The 5-inch Yamamoto Senko is what I start with 100 percent of the time, spring, summer, fall and almost however I fish it. If I want to be able to see the bait I’ll throw a cream color or bubble gum, but most of the time I throw natural colors. 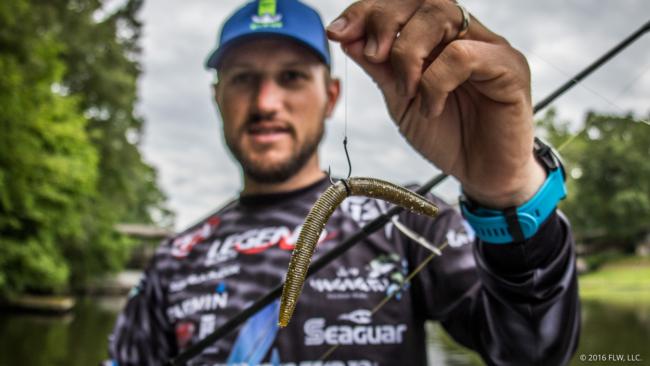 There are so many ways to wacky rig a Senko. You can put an O-ring on it and rig the hook through the O-ring, or you can rig it without an O-ring. You go through more baits without the O-ring, but some people like a certain fall, and to achieve that they have to do it without it. I usually use an O-ring, and when I know I’ll need a wacky rig I’m going to have baits rigged up in the bag ready to go with an O-ring on them.

I’ll also sometimes put a nail in one of the worm’s ends. I use those little lead nails, and I always break mine in half because the Senko falls pretty “heavy” on its own. With half a nail, the worm keeps a natural slow fall, but I can fish it deeper and keep it on bottom. If I rig it with a nail in it, I always want the point and the open part of the hook facing away from the nail. The nail end is going to fall first, and I want the hook to be pointing up.

How I work a wacky rig varies. If I see a fish, a lot of times I’ll make my first cast and won’t move the worm at all. I’ll just let it fall nice and natural, and a lot of times the fish will react to that. If not, I’ll make another cast and let it go down about a foot and start twitching it real slow. Usually, I just throw it in and let it sink on a slow fall, and then I’ll see my line get tight and know I’ve got one. I use yellow line, which is good for that. A lot of times I’ll see it take off and indicate those bites, and it’s really easy to see under docks and stuff like that.

I always reel into them for the hookset. I don’t ever jerk. I use a small hook, and when I set the hook I think it jerks out of their mouth. I feel like when I just reel into them it almost always sticks. There are occasions when I’ll use a hook with a weedguard, but I only throw a weedguard in places where I know I’ll get hung up more than half the time. 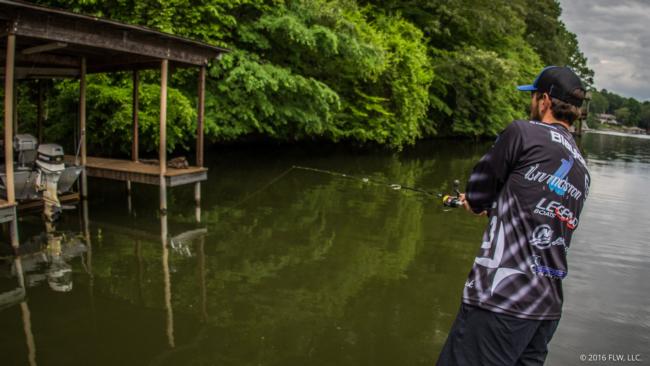