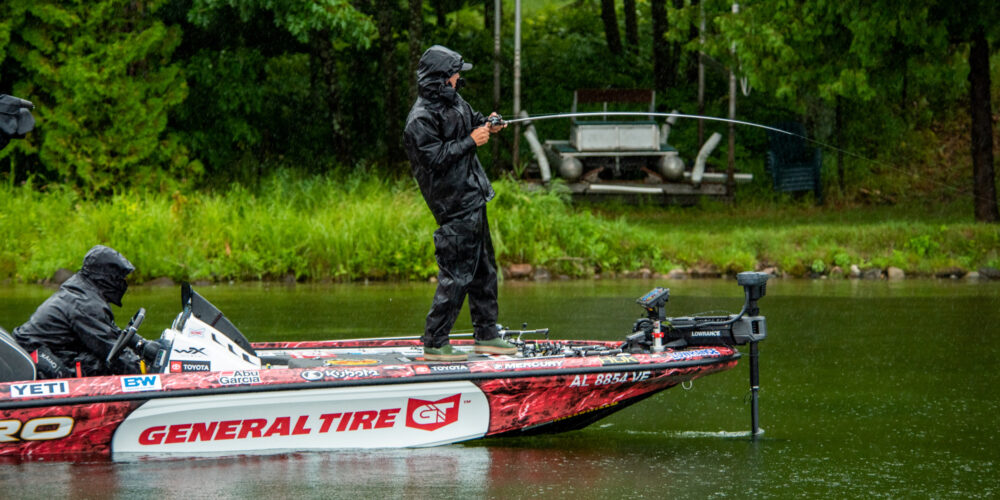 GRAND RAPIDS, Minn. – Elimination Round 1 of the 2020 General Tire World Championship Presented by Bass Pro Shops is set to premiere this Saturday, October 24, at 7 a.m. ET/PT on Discovery. The Championship event, shot over six days in late July in Grand Rapids, Minnesota, showcases 16 MLF pro anglers culminating the 2020 Cup season and competing for a top prize of $100,000.

“Cody shattered dang near every record that we had in last week’s episode,” said Marty Stone, MLF Director of Event Research and Program Analyst. “It’s fairly common to see this lake kick out two to four under every dock, but Cody said that he was seeing 15 to 20 fish under some docks. He said it looked like an aquarium. Pokegama Lake is a special fishery, and what these guys have been doing under the boat docks here is incredible.

“It was a bit surprising to see the smallmouth not play more of a role,” Stone continued. “But we’ve learned that Pokegama has had a record spawn of smelt this year. Smelt are the north’s version of a blueback minnow. So, the smallmouth didn’t sit down on the ledges like they normally do – they were out in the middle of the lake chasing smelt. We saw the docks in the bays on the main lake really come into play. It’ll be interesting to see if the docks hold up for the group, or if the smallmouth will become a factor as the tournament progresses.”

Pro Andy Montgomery was the winner of Shotgun Round 1 and has advanced directly into the Sudden Death Round. The remaining seven pros from that round will compete in their Elimination Round Saturday on Discovery. The Elimination Round features the remaining seven starting with their day one total and trying to add to it, to catch the largest total two-day cumulative weight. Only the top three will advance into the Sudden Death Round.

The seven anglers competing Saturday on Discovery will start the day in:

The 2020 General Tire World Championship Presented by Bass Pro Shops is a six-episode, two-hour series that features 16 MLF pro anglers visiting Northern Minnesota to compete on four different fisheries across the region, including Pokegama Lake, Wabana Lake, Turtle Lake, and Spider Lake. The fisheries are unknown to the anglers – they do not learn where they are competing until they arrive to the launch ramp each morning of competition.